Pancreatic acinar cell carcinoma (PACC) is a rare cancer. When the tumor is metastatic, few therapeutic options are available. Precision medicine using next-generation sequencing is defined by the administration of drugs based on the tumor genetic mutations. The usage of precision medicine for finding new therapeutic options for rare cancers is an emerging field. We have reported here the case of a patient bearing a multitreated metastatic PACC. This patient underwent somatic and constitutional exome analyses. The analyses revealed in the liver metastasis an amplification of the EGFR gene. Accordingly, the patient was treated with off-label usage of panitumumab. We observed rapid response with necrosis of the liver metastasis, while no efficacy was observed in the primary tumor. An exome analysis of the primary tumor revealed amplification of HER2 and MET with EGFR amplification. Such amplifications are known as a resistance mechanism to antiEGFR therapy. Our results suggest that exome analysis may be helpful to highlight targets in rare cancers, such as PACC. EGFR amplification in this pathology should be determined and could be used as a biomarker to propose antiEGFR therapy.

Core tip: The role of genetic profiling for therapy of rare cancer for precision medicine is currently under investigation. This case report reports, for the first time, that pancreatic acinar cell carcinoma could benefit from precision medicine and that EGFR gene amplification could be targetable by antiEGFR monoclonal antibody in this pathology.

Pancreatic acinar cell carcinoma is a rare cancer. This cancer accounts for about 1% of all cases of pancreatic cancers. Patients at diagnosis often present a large tumor with distant metastases in the liver or in other organs[1]. No standard treatments have been proposed in metastatic settings.

A 54-year-old man with past history of nephroblastoma at young age that had been treated by surgery and chemotherapy presented with diarrhea associated with important low weight of 10 kg. On June 2017, a CT scan revealed two liver metastases and voluminous mass in the head of the pancreas, without compression of the biliary tract or duodenum. The patient benefited from pancreatic biopsy upon endoscopic ultrasound. Histology revealed a tumor with large area of fibrous stroma. Acinar architecture was observed with pyramidal-shaped cells surrounding small lumina. The malignant cells were monomorph, with round nuclei and prominent nucleoli having eosinophil cytoplasm. Immunohistochemically, expression of EMA, cytokeratin 7 and absence of WT1, synaptophysin, and chromogranin A markers were shown. Ki67 was expressed in 30% of the tumor nuclei. The diagnosis of metastatic acinar cell pancreatic cancer was given.

The patient received four cycles of FOLFIRINOX, which resulted in tumor progression, and then two cycles of gemcitabine plus nabpaclitaxel, again with tumor progression. The patient was included in the EXOMA trial (NCT02840604). A biopsy of a liver metastasis was performed with a blood withdraw. Then, the patient benefited from somatic and constitutive exome sequencing. The tumor mutational burden was 410 mutations. We limited our analysis to a set of 324 genes, selected due to their roles in prediction of response or resistance to therapy or their associations with cancer predisposition. Our gene list was inspired from the recently published gene list of the MD Anderson Cancer Center used for clinical trial of precision medicine[8].

We observed an unknown mutation in the CUL2 and PBRM1 genes. PBRM1 encodes a tumor suppressor and component of the SWI/SNF chromatin protein complex. Inactivating mutations of PBRM1 are frequently found in renal tissues[9]. CUL2 is a cullin protein. Cullins are associated with RING proteins and ubiquitin E3 ligases. This complex regulates various cellular processes, including proliferation, differentiation and apoptosis. Loss of PBRM1 activity is also associated with chromosomal instability, due to inability to promote cohesion[10]. Because of the presence of PBRM1 mutation, we searched for chromosomal instability using TITAN software. Titan is a Python/R package for analyzing subclonal copy number alterations and loss of heterozygosity in whole genome and exome sequencing of tumors[11].

We observed a ploidy near 3, where 21 chromosomal fragments of more than 10 mB were amplified and 4 chromosomal segments of more than 10 mB were deleted. The number of clones in this tumor was one. Interestingly, we observed a large chromosome 7 amplification containing the EGFR gene locus, resulting in the presence of three copies of the EGFR gene (Figure 1A). Extensive analysis of the amplifications revealed that only EGFR but not MET (Figure 1A) nor ERBB2 (Figure 1B) were amplified. Based on this observation, antiEGFR (panitumumab) treatment was given.

Figure 1 Representation of chromosomal amplification and deletion in chromosomes 7 (A, C) and 17 (B, D) in the primary tumor (C, D) and the liver metastasis (A, B). Portions in red are amplified, portions in blue are deleted and portions in green are diploid. Genes of interest are indicated by a red arrow.

At 2 wk after the first injection, we observed clinical improvement for the patients, with 2 kg weight gain and disappearance of liver pain. After two cycles of chemotherapy, we observed a dissociated response with complete necrosis of the liver metastasis, which was tested for exome analysis (Figure 2A and B). In contrast, we did not observe any changes in the tumor characteristics of the primary tumor (Figure 2C and D). A second exome analysis was performed on the primary tumor. Interestingly, we observed in this tumor EGFR amplification but concomitant amplification of ERBB2 and Met loci (Figure 1C and D), suggesting the presence of an intrinsic tumor resistance mechanism to antiEGFR therapy. 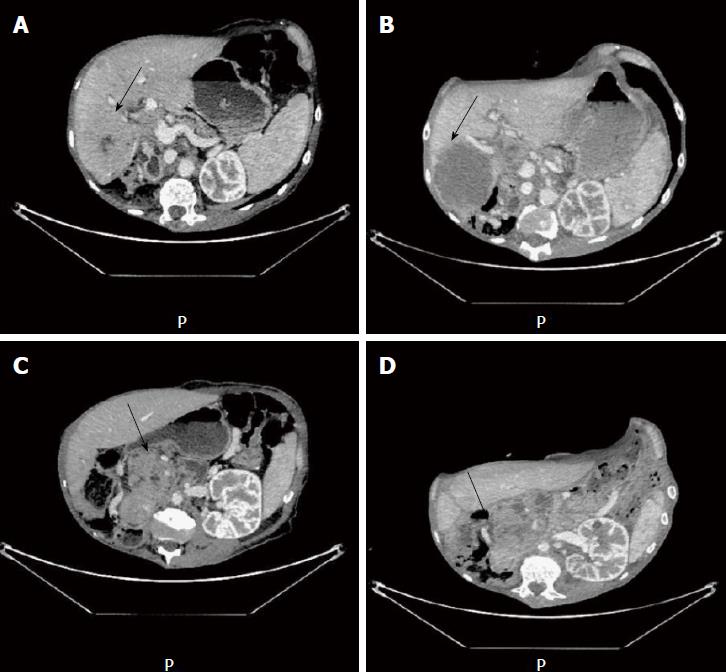 The primary tumor contained two clones, including one with strong similarly to the liver metastatic one, suggesting that only one clone was at the origin of the metastasis process.

Pancreatic acinar cell carcinoma is a rare disease of the pancreas. This is a tumor with poor prognosis, like ductal adenocarcinoma. The mean survival is around 2 years and the 3-year survival rate is about 25%[12,13]. Because of the rarity of the disease, few trials address the therapeutic strategy to treat metastatic pancreatic acinar cell carcinoma. Classically, these tumors are considered as chemoresistant ones. Patients are treated with first-line therapy, like pancreatic ductal adenocarcinoma, and then proposed for palliative care.

In contrast to ductal adenocarcinoma of the pancreas, we have little information on the underlying genetic alterations that dictate the development of pancreatic acinar cell carcinoma. Only a study of 23 cases of pancreatic acinar cell carcinoma was extensively characterized by exome sequencing fluorescence in situ hybridization and microsatellite instability analysis[14]. This study underlined some mutations that could be targetable, such as those in genes coding for members of the Fanconi anemia pathway and mutations in genes such as BRCA2, PALB2, BAP1, ATM, BRAF and JAK1. Such mutations could be targetable by PARP inhibitors, BRAF inhibitors and JAK1 inhibitors respectively. However, we did not observe any mutations in these genes in our patient.

Pancreatic acinar cell carcinoma presents frequently with a large number of chromosomal alterations and a major intratumoral heterogeneity. These data suggest that these tumors are chromosomally unstable[15], although the mechanism(s) which explain chromosomal instability is(are) unclear. We could suspect that it may explain its aggressive behavior and resistance to therapy[16]. In this report, the presence of PBRM1 mutation, which is classically associated with chromosomal instability, could explain this instability. Such instability should induce some amplification of oncogenes that could be targetable. In this case, the liver metastasis presented amplification of EGFR, which could be oncogenic but also a target for antiEGFR therapy.

Efficacy of antiEGFR therapy is restrained by the presence of KRAS-NRAS mutations[17]. However, none of the pancreatic acinar cell carcinomas had KRAS mutation in previous series, in contrast to ductal adenocarcinomas[18-20].

Accordingly, we did not detect mutation either on KRAS or on NRAS in our patient. We observed, for the first time, amplification in the EGFR locus in a pancreatic acinar cell carcinoma. In colorectal cancer, EGFR amplification was previously described as a biomarker associated with antiEGFR efficacy[21,22]. The presence of a dissociation response between liver metastasis and primary tumor suggest the presence of a clonal heterogeneity between the two tumor sites, confirmed by our bioinformatic analysis of copy number alterations. Indeed, this analysis underlined that the primary tumor contained two clones, while the liver metastasis contained only the antiEGFR-sensitive clone. The mechanism of resistance to antiEGFR therapy is pleiotropic and includes presence of KRAS and NRAS mutations, PIK3CA and PTEN alterations, mutation in the extracellular domain of EGFR, HER2 and MET amplification 16. The presence of both HER2 and MET amplifications gave strong rational to explain the resistance of the primary tumor to antiEGFR therapy.

Together, this report provides the first description of a major and rapid response of pancreatic acinar cell carcinoma to antiEGFR therapy related to EGFR amplification. This report also gives rationale to perform multiple biopsies or liquid biopsy to address tumor heterogeneity, which could explain dissociated response.

A pancreatic cancer with liver metastasis.

Amplification of the EGFR gene is targetable in pancreatic acinar carcinoma.

Histology and molecular biology are required for the diagnosis.

The patient was treated with off-label usage of panitumumab.

Our findings suggest that exome analysis may be a helpful tool to highlight targets in rare cancers, such as pancreatic acinar cell carcinoma. EGFR amplification in this pathology should be determined and could be used as biomarker to propose antiEGFR therapy.