We used data for 2100 subjects including X-ray images, pepsinogen I and II levels, PGI/PGII ratio, Helicobacter pylori (H. pylori) antibody, H. pylori eradication history and interview sheets. We performed two-stage classification with our system. In the first stage, H. pylori infection status classification was performed, and H. pylori-infected subjects were automatically detected. In the second stage, we performed atrophic level classiﬁcation to validate the effectiveness of our system.

Although further improvements of the system are needed, experimental results indicated the effectiveness of machine learning techniques for estimation of gastric cancer risk.

Gastric cancer remains the third leading cause of cancer mortality in the world, and East Asian countries, including China, South Korea and Japan, have the highest mortality rates[1,2]. In Japan, the number of gastric cancer-related deaths each year is approximately 50000, and there has been no change over the past several decades.

Many studies on gastric cancer have been carried out, and epidemiological studies have revealed that Helicobacter pylori (H. pylori) infection is a main cause of gastric cancer[3,4]. Consequently, in 1994, the International Agency for Research on Cancer (IARC) at the World Health Organization (WHO) declared that H. pylori infection can be classiﬁed as a group I carcinogen[5]. An animal experiment using Mongolian gerbils[6] and a prospective cohort study by Uemura et al[7] indicated that the main cause of gastric cancer is H. pylori infection. It has also been reported that about half of the world’s population is infected with H. pylori and that its prevalence is highly variable depending on age, geography and economic factors[8]. Although auto-immunization, drug-induced suffering and infectious diseases can cause gastritis and/or gastric cancer, most cases are due to H. pylori infection[9,10]. In Japan, the incidence of H. pylori-negative gastric cancer was reported to be 0.3%-0.6%[11,12], and almost all cases of gastric cancer are derived from H. pylori-induced gastritis. Moreover, H. pylori infection rates in Japan differ according to the year of birth, and generations born in the 1970s or later have extremely low infection rates[13]. Meanwhile, recent studies have shown that H. pylori eradication therapy reduces the risk for development of gastric cancer[14,15]. H. pylori eradication therapy for H. pylori-infected patients with gastritis has been covered by national health insurance since February 2013 in Japan, the first country in the world to do so. Hence, mass screening methods with consideration of gastric cancer risk are required[16,17].

We performed a preliminary study for classification of gastric cancer risk from photoﬂuorography. Then we developed an automatic risk classiﬁcation system utilizing machine learning techniques for achieving our objective.

Data for X-ray images (8-bit gray scale, 1024 × 1024 pixels), H. pylori antibody, pepsinogen I (PG I) level, pepsinogen II (PG II) level, PGI/PGII ratio, H. pylori eradication history and interview sheets were used in this study. These data were acquired at the Medical Examination Center of Yamagata City Medical Association that specializes in gastric cancer mass screening from April 2012 to March 2013. We used X-ray images of eight positions for each subject. H. pylori antibody titers were measured by enzyme-linked immunosorbent assay kits (E Plate Eiken H. pylori, Eiken Chemical Co., Ltd., Tokyo, Japan). PG I level and PG II level were measured by Auto pepsinogen I BML-2G and Auto pepsinogen II BML-2 (BML, Inc., Ltd., Saitama, Japan), respectively. The cut-off value of H. pylori antibody titers was 10 U/mL, and the cut-off values of PG levels were PG I < 70 ng/mL and PG I/PG II ratio < 3. Subjects in whom these serum markers were measured were categorized into three or four groups corresponding to their gastric cancer risk as shown in Table 1. In ABC (D) stratiﬁcation, group A is deﬁned as a very low gastric cancer risk group, group B is defined as a middle-risk group, and groups C and D are deﬁned as high-risk groups, with group D generally being included in group C[21].

The veriﬁcation method was 15-fold cross-validation. The gold standard for evaluating our system was the result of ABC (D) stratiﬁcation by blood inspection. Sensitivity, speciﬁcity and Youden index (YI) were used as evaluation criteria for each stage’s classiﬁcation. A receiver operating characteristic (ROC) curve was generated based on each stage’s classiﬁcation result. ROC curves were obtained by changing the threshold that determines gastric cancer risk. Accuracy, precision, false positive rate and false negative rate were calculated. We also utilized a confusion matrix for evaluation of our system. A confusion matrix is often used in the field of machine learning, and it represents information about actual and predicted classification results obtained by a classification system. In this study, Togo R, Ishihara K, Ogawa T and Haseyama M from the Graduate School of Information Science and Technology, Hokkaido University took charge of the statistical analysis since they have an advanced knowledge of statistical analysis.

The total number of subjects was 2535, and subjects who had undergone H. pylori eradication therapy and had suspected false negative results in ABC (D) stratification were excluded as shown in Figure 1. Specifically, we excluded 175 subjects who had undergone H. pylori eradication therapy, and we excluded 260 subjects in group A with PG I levels ≤ 30 ng/mL, PG II levels ≥ 15 ng/mL or PG I/PG II ratio < 4. If the training data included data for such subjects, it would have caused classification performance degradation since the correlation between radiological ﬁndings and ABC (D) stratiﬁcation results for them might be eliminated. Consequently, data for 2100 subjects (1057 males and 1043 females; mean age, 50.36 ± 9.43 years) were used for analysis. There were 1130 subjects (53.8%) in group A, 508 subjects (24.2%) in group B and 462 subjects (22.0%) in group C (D). 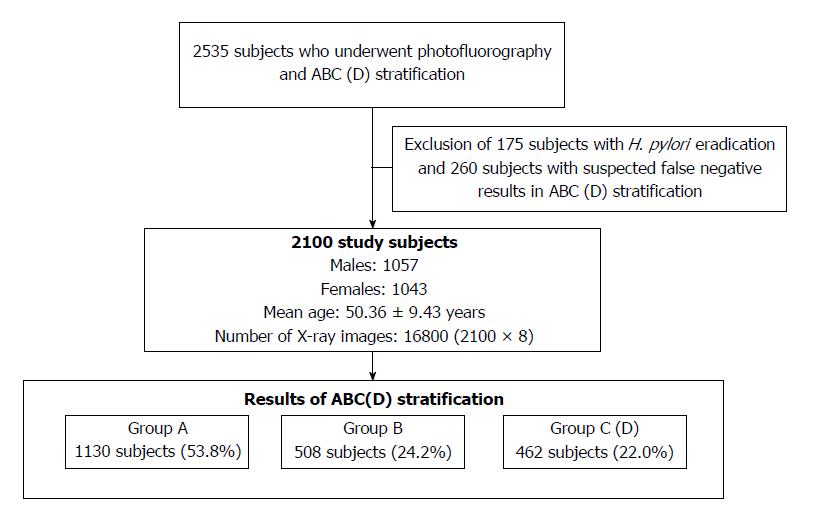 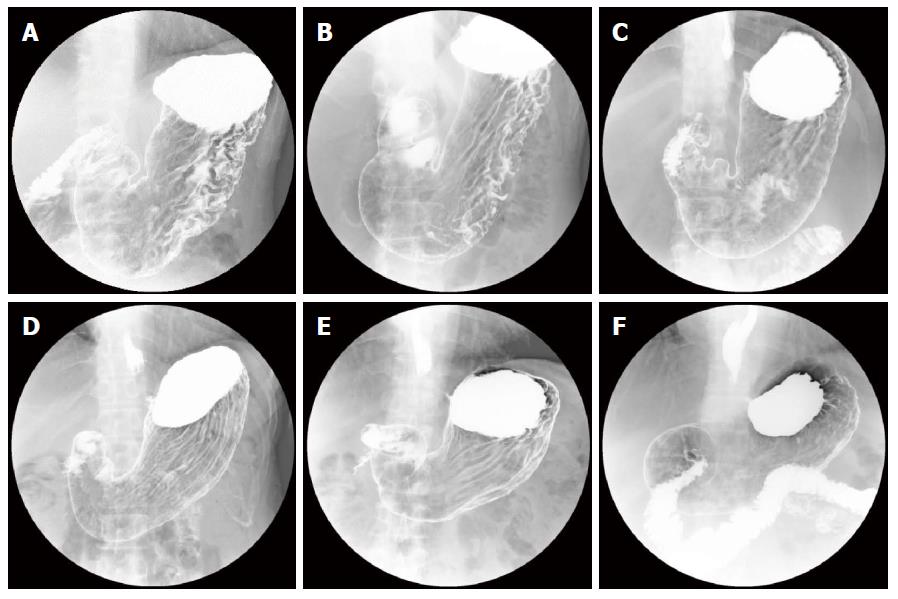 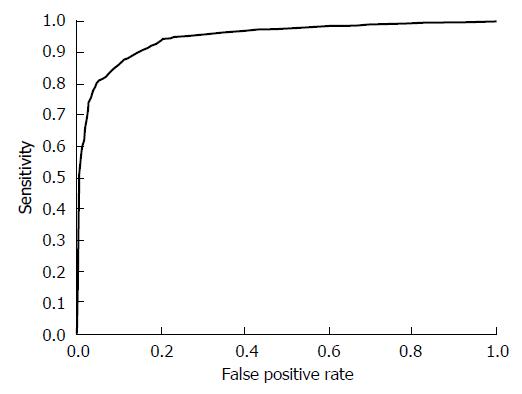 Next, we examined whether our system can be applied to more specific atrophic level classification. In the supplementary experiment of the second stage, we focused on H. pylori-infected subjects and applied atrophic level classification to them. The number of subjects classiﬁed into each class is shown as a confusion matrix in Table 3. The experimental results showed that 364 of the 462 subjects who belonged to group C (D) in ABC (D) stratification were correctly classified into the severe atrophic level group based on the condition of the stomach shown in X-ray images. Sensitivity (severe), speciﬁcity (non-severe) and YI in the second stage were 0.777, 0.824 and 0.601, respectively. Other evaluation criteria were as follows: accuracy was 0.800, precision was 0.809, false positive rate was 0.176 and false negative rate was 0.223. Figure 4 shows examples of X-ray images correctly or incorrectly classified in the second stage. The ROC curve of the second stage that was obtained by changing the threshold determining the severity of atrophic level is shown in Figure 5. 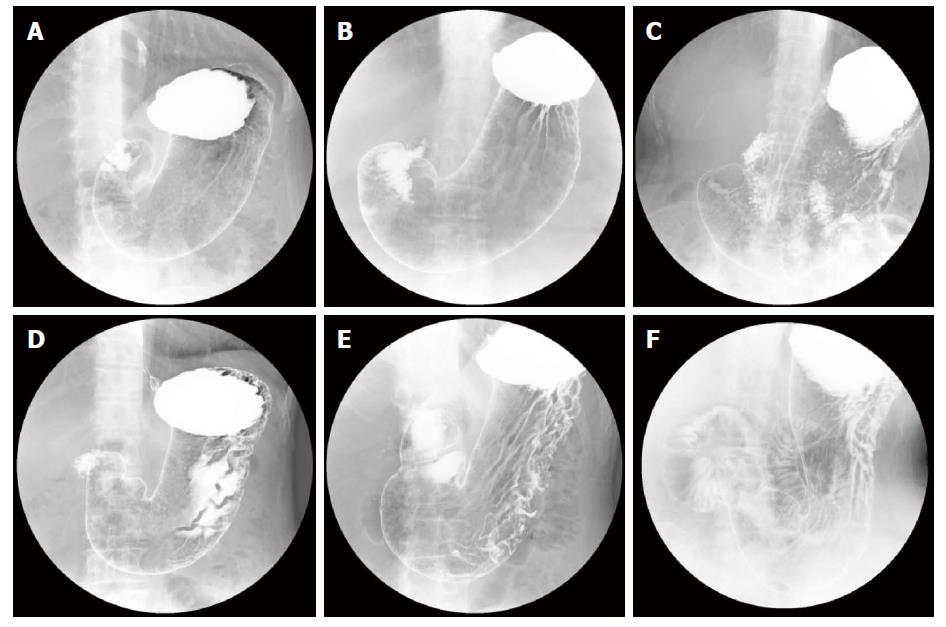 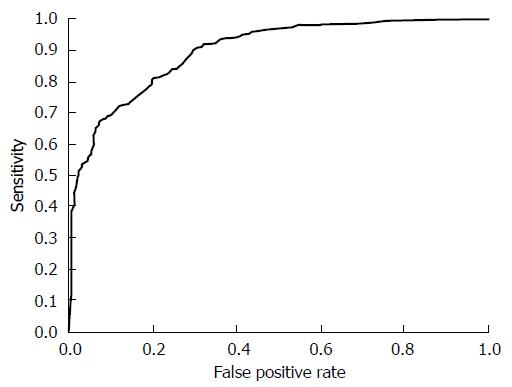 In this study, we developed an automatic gastric cancer risk classification system as a preliminary study. Our system analyzes X-ray images and provides H. pylori infection status or atrophic severity level. It should be noted that the most important classification is the first stage, and the second stage is a supplementary experiment to verify whether our system can perform more detailed atrophic level classification. Experimental results indicated that risk-based information can be provided by our system. In the first stage, the most important risk classification, 88.9% of the subjects were correctly classiﬁed into the low gastric cancer risk group (H. pylori non-infection) and the high risk group (H. pylori infection). The purpose of our system is to improve the ﬁnal accuracy of clinicians’ diagnosis by providing risk-based information from image data. Gastric cancer risk information based on X-ray images is useful for identification of high-risk individuals and for reducing the burden on clinicians. Results of studies on identification of risk information for gastric cancer from photoﬂuorography and examination of its application should be helpful for the future of gastric cancer mass screening. Moreover, the threshold determining each risk group in our system can be continuously changed depending on the demands of clinicians. Namely, it is possible to decrease false negative cases by enhancing sensitivity based on the threshold for gastric cancer mass screening. Therefore, the combination of the results of ABC (D) stratification and our system will provide more reliable information for clinicians.

Our study has some limitations. First, although the gold standard of our system was ABC (D) stratification and H. pylori eradication history, there are often contain false negative or false positive cases. Ideally, H. pylori infection status and atrophic level should be evaluated by radiological findings of photofluorography or endoscopy, and these results should be used for the gold standard. However, since this preliminary study focused on mass screening data, we utilized ABC (D) stratification as the simplest inspection with a high objectivity. Secondly, the exclusion rule of this study is our limitation. The advantage of image-based risk information is that gastric cancer risk information can be estimated from individuals who have undergone H. pylori eradication therapy since the presence or absence of atrophy of the stomach remains a key factor for them. However, H. pylori-eradicated individuals and individuals with suspected false negative results of ABC (D) stratiﬁcation were excluded from our study due to the lack of a gold standard of ABC (D) stratification. Instead, we performed a supplemental experiment for evaluation of stomach atrophy in this study. We will target H. pylori-eradicated individuals and suspected false negative individuals as a future work.

Gastric cancer is one of the most common malignancies, and has the highest mortality rates in East Asian countries. Although ABC (D) stratification is effective method for evaluating gastric cancer risk, photofluorography still plays an important role in gastric cancer mass screening since image-based evaluation is mandatory.

The aim of this study was investigation of potential of machine learning techniques using photofluorography.

We developed an automatic gastric cancer risk classification system for identification of Helicobacter pylori infection status and atrophic level from photoﬂuorography. All of 2100 patients’ data were acquired at the Medical Examination Center of Yamagata City Medical Association in Japan, from April 2012 to March 2013. From DICOM data, we extracted the image data while securing anonymity.

Experimental results suggested that image-based risk information can be calculated by our system.