Inflammatory fibroid polyp (IFP) is a rare, idiopathic pseudotumorous lesion of the gastrointestinal tract, first described by Vanek in 1949 as an eosinophilic submucosal granuloma[1]. In that first report of six gastric lesions, Vanek called attention to the inflammatory nature of the lesions and their submucosal origin. In 1953 Helwig and Ranier confirmed the fibroblastic origin of proliferating spindle and stellate cells, and coined the term inflammatory fibroid polyp which has remained the generally accepted term[2]. Subsequently, these lesions were found throughout the gastrointestinal tract[3].

A 76 year old diabetic female with chronic GERD was referred in September 2007 for screening colonoscopy. Since cholecystectomy a year earlier, she noted loose bowel motions. Rarely, she noted blood on the toilet tissue but denied any abdominal pain or weight loss. The patient was slightly overweight. Abdominal examination did not reveal any masses or tenderness. CBC at that time revealed a normal hemoglobin level.

The patient underwent screening colonoscopy, which was normal (Figure 1A) except for external hemorrhoids, scattered diverticulae in the right colon and two diminutive, non-neoplastic polyps in the sigmoid colon. Esophagogastroduodenoscopy revealed a small hiatus hernia and non-specific gastritis. Pathology revealed that the colonic polyps were hyperplastic. Stomach specimens showed H pylori negative moderate chronic gastritis with no metaplasia. She was advised to continue omeprazole over the counter daily for symptomatic relief, and cellulose was added for presumed bile acid diarrhea. 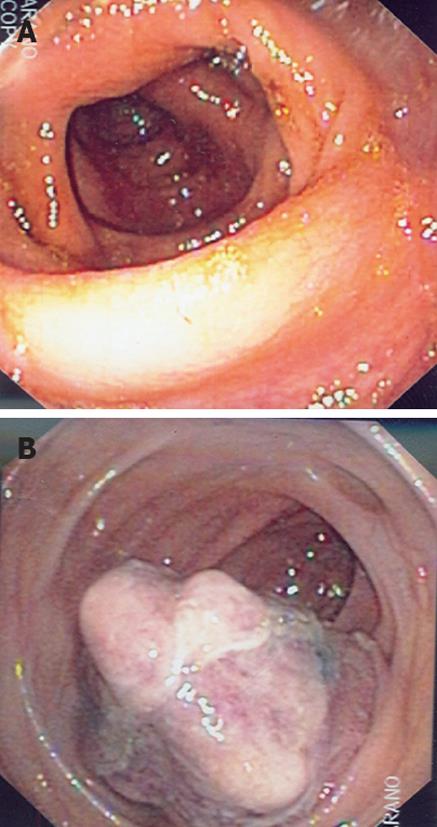 Four months later, in January 2008, she first experienced epigastric pain which by the time of her clinic visit was described as “upset stomach”. Her abdominal examination was unremarkable and she reported improvement in diarrhea with cellulose. At this time, esomeprazole was substituted for omeprazole.

In May 2008, eight months after her initial endoscopy, she again had an episode of abdominal pain but this time it was associated with unheralded hematochezia. Both were self-limited and when seen in the clinic a few days later, she was noted to be pale but vital signs were within normal limits and abdominal examination revealed no tenderness or masses. Hemoglobin was now 6.7 gm/dL. She was transfused with 2 units of packed red blood cells as an outpatient, and oral iron therapy was begun.

At the next follow-up visit in a few weeks, the patient again complained of abdominal bloating and diarrhea. Hemorrhoidal-type rectal bleeding was again noted. Her hemoglobin was 10.1 gm/dL. Her weight now was 119 lb, representing an 11 lbs weight loss since her presentation. Abdominal exam at this time revealed a movable fullness in the right lower quadrant, which was presumed to be fecal content. Follow-up examination two weeks later failed to confirm the abdominal mass; however her hemoglobin was 9.7 gm/dL. Because of her continuing anemia, vague abdominal symptoms and weight loss, an overlooked colon lesion was considered and repeat colonoscopy recommended.

At endoscopy two weeks later, a 6-7 cm exophytic, polypoid cecal mass (Figure 1B) was seen. Biopsy of this mass was read as “inflammatory exudate with no mucosal tissue fragments or malignant cells identified”.

The patient was then referred to General Surgery with a presumptive diagnosis of overlooked cecal carcinoma. Preoperative clinical evaluation revealed no palpable mass, normal labs and carcinoembryonic antigen level except for anemia with hemoglobin of 9.5 gm/dL. Preoperative abdominal/pelvic CT scan with oral and intravenous contrast revealed a “right colonic intussusception with a low density 2.2 × 2.7 cm mass as the lead point consistent with the patient’s known colon carcinoma” (Figure 2). An excision was then planned with open laparotomy to establish a definitive diagnosis. Intraoperatively, a small bowel intussusception was seen with a polypoid ileal tumor being the lead point. No other lesions were seen. The location of this tumor coincided with the one seen on colonoscopy. 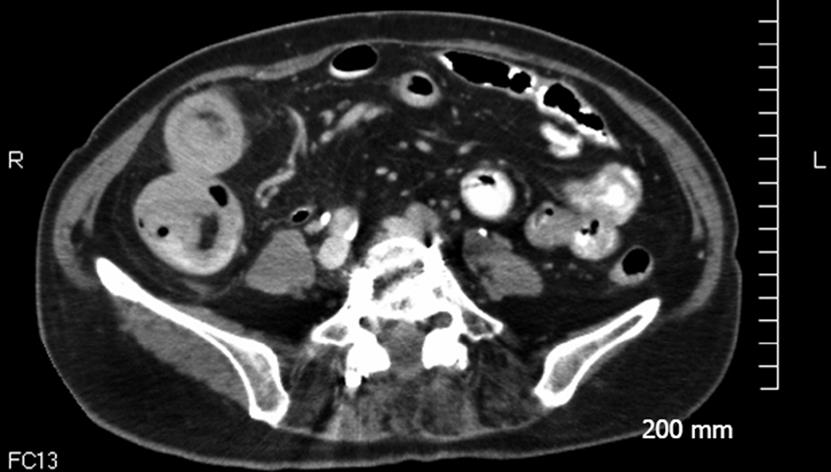 The excised bowel segment revealed an ulcerated polypoid mucosal mass (Figure 3) in the ileum, 25 cm from the distal colonic margin and 7.7 cm from the proximal ileal margin. It measured 5.5 cm × 3.5 cm × 2.5 cm in size. There was no muscle wall invasion and the uninvolved mucosa was unremarkable except for an incidental colonic tubular adenoma. Microscopically, the tumor was well-vascularized and composed of sparsely cellular proliferation of bland spindled cells with fibromyxoid background containing numerous eosinophils (Figure 4). The spindle cells were negatively stained for CD117 (c-kit), smooth muscle actin, and CD34. The final pathologic, microscopic diagnosis was “inflammatory fibroid polyp”. 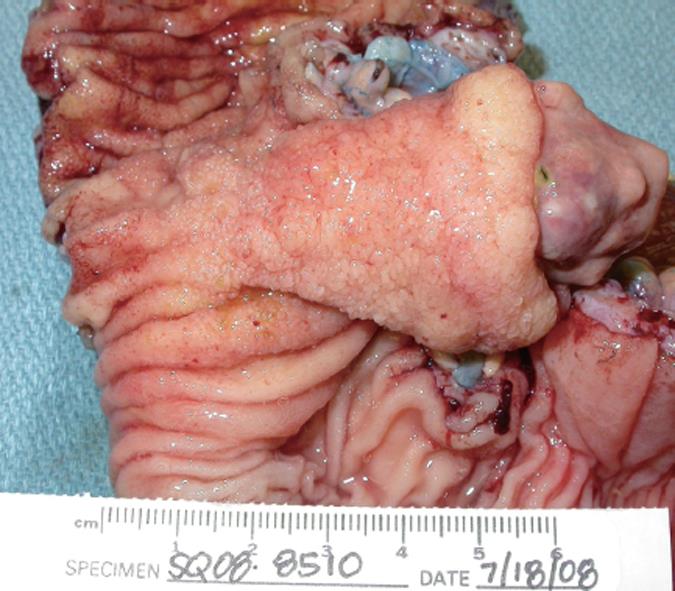 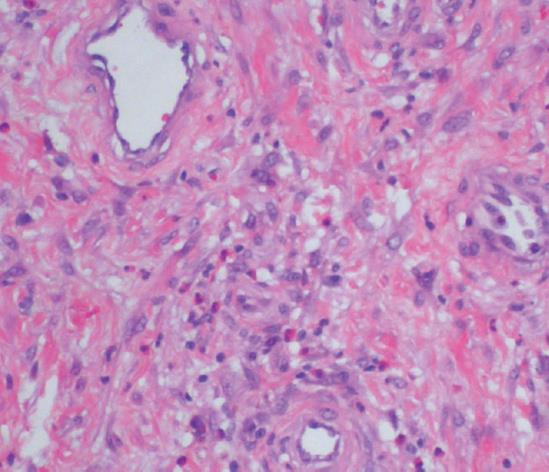 The patient did well post-operatively, remaining free of symptoms following discharge. Her hemoglobin gradually normalized with oral iron in the weeks following her surgery.

Grossly, lesions may be polypoidal or sessile, varying in size from 0.2-12 cm with an average reported size of 4 cm[5-7]. They usually present in the sixth or seventh decades but cases were reported in a wide age range of 2 to 90 years[5-7]. The true prevalence of IFPs is not known. While mostly reported as solitary gastric lesions, multiple cases of small bowel lesions were subsequently described[1,7-10]. In Johnstone and Morson’s series of 76 cases, 18% were in the small bowel[3]; a Spanish study of 26 cases by Acero et al[11] revealed 7 ileal and 2 jejunal IFPs. In a literature review, Bays et al[12] cited fewer than 20 jejunal IFPs had been reported until 2004. In general, the small bowel has been reported to be the second most common site of IFP occurrence after the stomach; however, Ozolek et al’s series of 42 cases revealed 13 cases were in the large bowel and 10 in the small bowel[6].

Our patient’s presentation was unusual because of the absence of pain even during intussusception as noted both at colonoscopy and pre-op CT scanning. In retrospect, the intermittent right lower quadrant mass was almost certainly the palpable intussusceptum. The necrotic tumor at colonoscopy was most likely the lead point of the IFP which was engorged or ischemic. We believe that the likely cause for her hematochezia was the IFP since the anemia, unresponsive to iron therapy preoperatively, normalized postoperatively.

Our case illustrates that in some patients, symptoms may be subtle and nonspecific such that a correct preoperative diagnosis is difficult if intussusception is not considered, as is the case usually. The sensitivity of contrast studies such as barium enema and small bowel series are relatively poor and abdominal ultrasound lacks specificity[26]. However, del-Pozo et al[27] reported a crescent-in-doughnut sign that reportedly helps diagnose an intussusception via ultrasound. In accordance with other studies, abdominal CT scanning is the most useful study because it reveals a mass with a central dense area and a halo of low attenuation representing the intussusceptum and the edematous intussuscepiens, respectively[23,28-29]. Newer techniques which have recently assisted in the diagnosis include capsule endoscopy and retrograde double balloon enteroscopy[30,31]. Given the risks of underlying malignancy and vascular compromise, once adult intussusception is diagnosed, the treatment is operative resection.