Cancer-related thromboembolic disease is a well recognized syndrome since first described by Armand Trousseau in 1865. Preventing the morbidity and mortality related to thromboembolism in these patients is becoming a priority research area with the advent of new anti-coagulants. It is only recently that randomized trials of improved quality are been undertaken to study this question. Many of these trials however are still not accounting for the heterogeneity of “cancer” in terms of anatomical site, histology, stage and treatment. This editorial review highlights why pancreatic cancer may serve as a model malignancy to study this question.

There are a number of particular problems that may contribute to the poor outcome of this cancer. These include a non-resectable primary cancer in 85%-90% of patients, resulting in a continuous risk of further local invasion and damage to vessels and other vital structures, the increased incidence of biliary stenting procedures with heightened risk of biliary sepsis and pancreatitis, and the frequent metabolic problems such as diabetes and malabsorption causing decreased resistance to infection and increased susceptibility to cardiovascular morbidity. A key additional contributor to morbidity and mortality in this group of patients is vascular thromboembolic disease (VTE)[1].

It is quite sobering to note that a multitude of post-mortem and epidemiological studies have persistently highlighted pancreatic cancer as a malignancy with a severe propensity for thromboembolism[2-4]. The majority of patients will die with or of a VTE, and VTE is diagnosed premortem in 14 to 30% of patients and in up to 60% of patients at post-mortem[5]. Moreover at least epidemiological retrospective data have shown that the clinical occurrence of VTE confers a worse prognosis to patients with non-resectable pancreatic cancer[6]. The further tendency until recently for VTE not to be reported as an adverse event in registration chemotherapy trials has seemed to make the problem even more obscure[7]. The diligent reporting of VTE in the prospective sense in randomized trials can provide insight into the survival impact of VTE on pancreatic cancer as well. The additional data for the NCI-CTG PA.3 trial (Table 1)[8] demonstrate clearly that the detrimental impact of VTE on survivorship can be greater than the beneficial impact of the agent being studied (in this case erlotinib)[9]. We have shown that in fit patients randomized to phase III trials the early portion of the survival curve is the steepest amongst all the cancers of the GI tract (Figure 1). We have suggested that this is an indirect effect of VTE related “stealth” mortality[7]. 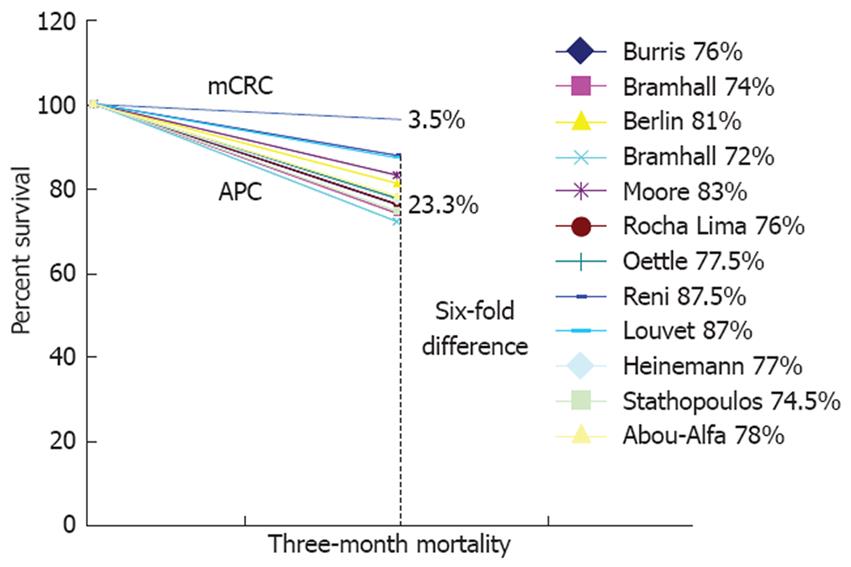 Figure 1 Early death burden (EDB) of patients with APC (advanced pancreatic cancer) compared to patients with mCRC (metastatic colorectal cancer). The key lists the trials reviewed and the figures (%) for 3-mo survival. Detailed data can be found in reference 7.

Before the advent of powerful and safe anticoagulants it would admittedly have been churlish to fault the lack of work in this area, given the risks and difficulties attached to warfarin and unfractionated heparin; however, today it is difficult to understand why the development of LMWHs in the last 15 years has not lead to the requirements of pancreatic cancer patients, vis a vis VTE, being marked as a priority area for research.

Could it be that to the casual eye reading the usual format of epidemiological data, pancreatic cancer does not seem to have such a seriously worse problem than other cancers? Why does pancreatic cancer tend to be grouped together with colorectal, ovarian and bladder cancer-amongst others- especially in the emerging major trials[10] that are now trying to redress the above iterated grievance?

Epidemiological registry studies seem to attribute a similar cumulative incidence of thromboembolism to the major cancers, such as ovarian cancer, colorectal cancer, stomache, lung and to pancreatic cancer. However these figures obscure a fact that does not seem to be usually highlighted. The common median survivorship of these different cancer groups is not taken into account. If one computes into the typically reported cumulative VTE incidence of 3%-5% for these cancers the fact that this incidence is seen over a median survivorship of 6-7 mo for metastatic pancreatic cancer, 20-24 mo for metastatic colorectal cancer and in excess of 36 mo for advanced ovarian cancer, one then gets a better feel for the disproportionate VTE related burden of APC patients throughout their short life-span. This has been best expressed in the article by Chew et al[4] where cumulative incidence was then computed in terms of rate of VTE per 100 patient-years. While the registry 2-year cumulative incidence of VTE for metastatic (the investigators use the term “remote”) stomache, bladder, ovarian, colon and pancreatic cancer were 4.4%, 4.3%, 3.3%, 2.9%and 5.4% respectively, the rate of VTE per 100 patient-years for the same cancers for the first year after diagnosis were 10.7%, 7.9%, 3.6%, 4.3% and 20% respectively[4].

PANCREATIC CANCER: THE “MODEL” FOR THE STUDY OF VTE

There are at least 2 other malignancies in the metastatic setting with serious thrombosis related problems, gastroesophageal tract (GOC) and non small cell lung cancer (NSCLC). Interestingly, small cell lung cancer (SCLC) has a much diminished incidence of systemic VTE[11] but gets grouped with NSCLC as “lung cancer” in epidemiological studies reducing the actual VTE burden of “lung cancer”. Similar to pancreatic cancer, patients with metastatic or locally advanced NSCLC and GOC tend to have short survivorship and high incidence of VTE. Although the thrombosis problem in these malignancies may not be as severe as in pancreatic cancer, they are more common malignancies and therefore a trial would potentially be easier to recruit. The reason however that makes pancreatic cancer a more compelling model for the testing of anticoagulants is that it carries very few of the risks that would increase the likelihood of International Society of Thrombosis and Haemostasis (ISTH-scale) grade III or worse bleeding complications. Brain metastases, with the accompanying increased risk of intracranial haemorrhage, while common in lung cancer are almost unheard of in pancreatic cancer. Nor is haemoptysis a risk in pancreatic cancer. Erosion of the GI tract and GI bleeding, although possible in some cases of duodenal infiltration, is markedly less likely than in GOC. Our own data attest to the safety profile of weight adjusted dalteparin in pancreatic cancer patients[12].

Why do we need a model for these studies? Recent meta analysis of trials to date have supported the notion that anticoagulants may have a significant impact on survivorship[13-15]. However, the inhomogeneous populations of cancer patients studied in terms of anatomy, histology, stage, performance status, concurrent treatments and “line” of treatment, coupled to the heterogeneity of the dosing schedules and the type of the anticoagulant used, mean that numerous confounding variables can be held up by the critics to account for the results. Standardization therefore through a “model” malignancy will be necessary to provide the type of data that will win over the skeptics. If cost-effectiveness of VTE prevention cannot be demonstrated in a cancer with such a high VTE-event-rate where maximum therapeutic impact can be achieved with minimum time on treatment, then success in other clinical settings would be uncertain.

Not realizing potential survival and quality of life benefits from the prevention of morbidity and mortality related to VTE may not be the only matter at stake. There may be further reasons why the study of anticoagulants specifically in pancreatic cancer should command attention. In an era of complex team approaches to trial design, often driven by statistical considerations and competing pharmaceutical priorities, clinical parameters that may influence trial endpoints may be easily overlooked. For example, the detrimental clinical impact of VTE on up to 20% of patients entering a pancreatic cancer study is an a priori variable that is not stratifiable. It therefore could influence the outcome of conventional study endpoints, putting major expensive trials of new anticancer agents at risk of both Type I and Type II statistical error. This is especially pertinent in a cancer where we are looking for small benefits, where the accrual of more than a few hundred patients per trial is not likely and in which the superimposed thrombogenic effect of the anti-cancer agents (novel and old in combination) cannot be prospectively quantified. Maybe, in this specific malignancy, we should be fixing VTE first and then starting our journey down the exciting routes that seem to be opening up with the newer anti-cancer agents.

VTE in cancer is a complex and serious clinical issue that needs better understanding, better treatments and sophisticated preventative approaches. Pancreatic cancer patients are at the forefront of VTE related morbidity and mortality making pancreatic cancer the model malignancy to address the issues related to VTE and cancer.