Foreign body ingestion is an emergency or acute situation that commonly occurs in children or adults and involves the ingestion of one or more objects. Moreover, once the discovery of swallowed foreign bodies has been made, families are typically very anxious to have the patient see a doctor. If the foreign object becomes embedded in the digestive tract, it must be removed; in emergencies, this is done by endoscopy or surgery. This case report presents the successful endoscopic retrieval of a chopstick with both sides embedded 4 cm into the esophageal wall for > 10 mo in a male patient following automutilation in an attempt to be released from a psychiatric hospital. Hot hemostatic forceps were used to open the distal esophageal mucosa in which the chopstick was embedded. The procedure was performed under intravenous general anesthesia and took approximately 7 h.

Core tip: Foreign body ingestion is an emergency that often occurs in children or adults with psychiatric disorders or mental retardation. Here, we report the unique case of a chopstick lodged in the esophagus for 10 mo in a 50-year-old man. The chopstick was embedded 4 cm into the esophageal wall at both ends. Therefore, the procedure was performed under intravenous anesthesia. We made a 4-cm long incision, approximately 1 cm in depth in the esophageal mucosa using hot hemostatic forceps. This procedure took approximately 7 h to perform and an 18-cm long chopstick was removed.

Ingestion of foreign bodies that lodge in the upper gastrointestinal (GI) tract is a common clinical situation. Most of these objects pass through the GI tract spontaneously, but some require emergency endoscopic or surgical removal. Here, we report the first case of a patient with psychosis who had a chopstick lodged in the esophagus with both ends embedded in the esophageal wall for > 10 mo. The patient had a 2-mo history of repeated fever prior to foreign body removal. Ten months previously, the patient experienced a sudden loss of appetite and displayed repetitive behavior of touching his sternum with his hand. The patient’s family brought him food daily. He experienced repeated episodes of emesis and fever for 2 mo before the family brought him to the hospital.

Foreign body ingestion is a commonly encountered clinical problem and emergency endoscopy case. The patient had swallowed a chopstick following self-mutilation in an attempt to be released from a psychiatric hospital. He refused to say why he would not take fluids daily until his repeated vomiting and fever gradually exacerbated. The family took him to see a doctor in the GI/Internal Medicine Department of our hospital. Chest computed tomography (CT) revealed the tip of an esophageal foreign body as well as a bilateral lung infection (Figure 1A and B). Gastroscopy revealed a chopstick with both ends lodged 4 cm in the esophagus wall (Figure 1C).

The patient’s family chose to have the foreign body removed by gastroscopy rather than by a surgical procedure. Initially, a snare was used to tentatively remove the chopstick, however, this attempt failed (Figure 2A). After that, the bagging around the proximal esophageal mucosa was cut 22 cm from the incisors. However, the esophageal mucosa was fixed, and the field of vision was insufficient. Eventually, the esophageal wall was cut and wrapped on the far side of the chopstick using a hook knife. However, because the esophageal wall mucosa was > 1 cm thick, the hook knife was unable to cut properly. We cut the tissue using hot hemostatic forceps (Figure 2B), the distal end of the chopstick was freed (Figure 2C) and then removed by a snare and foreign body clamp. The full length of the removed chopstick was 18 cm (Figure 2D). The procedure was performed under intravenous anesthesia and took approximately 7 h to perform. On postoperative day 1, the patient experienced sustainable chest pain and had a maximum body temperature of 38.5  °C. The patient’s condition gradually improved, and he was discharged on postoperative day 7. 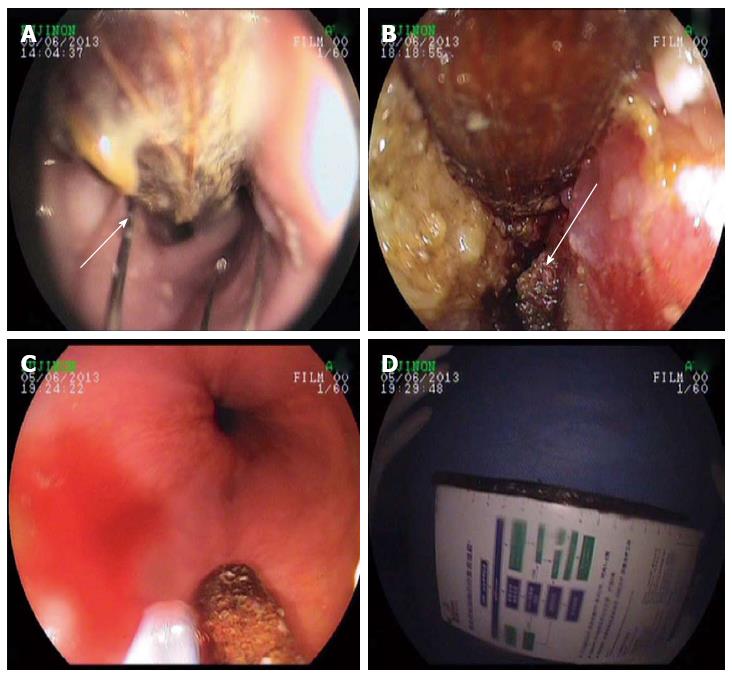 Ingestion of foreign bodies is common in clinical practice[1-3]. However, most foreign body ingestion occurs in children between 6 mo and 6 years of age; the rate of foreign body ingestion in adults is lower[4]. In adults, it occurs more commonly in patients with psychiatric disorders, mental retardation, or impairment caused by alcohol. The vast majority of swallowed foreign bodies are found and removed in a timely manner by endoscopy or surgery. This is the first report of ingestion of a foreign body in a patient with psychosis that remained lodged in the esophagus for > 10 mo. Because patients do not like the psychiatric hospital environment, they attempt self-mutilation in order to go home, according to family members. An 18-cm long chopstick is difficult to swallow and would require an external force to enter the esophagus. The distal end of the chopstick may pierce the esophageal mucosa slightly, but cannot pass through the cardia easily. The esophageal peristaltic wave that occurs while eating may move the chopstick tip in close contact with the esophageal mucosa. Reactive hyperplasia that would subsequently occur could embed the chopstick as a foreign body. In this case, hyperplasia of approximately 4 cm × 2 cm in the esophageal mucosa at both ends of the chopstick was noted after 10 mo.

The type of foreign object differs as well. The commonest types of foreign bodies are endoscopically removed in a reliable and safe manner by skilled endoscopists, with a high success rate[5]. Chopstick removal is associated with a high degree of risk; a skilled endoscopist is needed to perform a preoperative assessment and develop a good treatment plan. Esophageal perforation may require surgical management. We believe that endoscopic removal of foreign bodies is best done in the operating room.

In conclusion, we report our experience of retrieving an 18-cm long chopstick which was lodged 4 cm in the esophageal wall for > 10 mo. To our knowledge, this is the first clinical report of this type of retrieval in a single case.

Exacerbated vomiting and fever was described.

A chest computed tomography (CT) scan revealed the tip of an esophageal foreign body as well as a bilateral lung infection and gastroscopy revealed a chopstick with both ends lodged 4 cm in the esophagus wall.

The gastroscopy confirmed a foreign body in the esophagus.

Blood tests were performed routinely and no major clues were found.

A chest CT scan revealed the tip of an esophageal foreign body.

Endoscopic retrieval of the chopstick.

Endoscopy is an effective and minimally invasive treatment for similar cases.

This is a very interesting, original case report presenting utility of gastrointestinal endoscopy in diagnosis of psychiatric patient and demonstrating advantage of collaboration between psychiatrists and other clinicians, in management of patients with mental disorders. It is important in face of the fact that this collaboration is very often neglected. This paper is well written and endoscopic procedure is described in detail. The results are clearly presented.