Ventriculoperitoneal shunting (VPS) is a widely accepted technique for the treatment of hydrocephalus. The probability of shunt dysfunction is pretty high throughout life. Laparoscopy has become a valuable tool to perform VPS and treat abdominal complications. An electronic literature search was performed to reveal the published data relating laparoscopy and ventriculoperitoneal shunt in Medline, Embase, Scielo and Lilacs databases. The keywords employed were “laparoscopy” OR “laparoscopic surgery” AND “ventriculoperitoneal shunt” OR “shunt” AND “surgery” OR “implantation” OR “revision” OR “complication”. No high quality trials were developed comparing conventional laparotomic incision vs laparoscopic approach. Both approaches have evolved and currently there are less invasive options for laparotomy, like periumbilical small incisions; and for laparoscopy, like smaller and less incisions. Operating room time, blood loss and hospital stay may be potentially smaller in laparoscopic surgery and complications are probably the same as laparotomy. In revision surgery for abdominal complications after VPS, visualization of whole abdominal cavity is fundamental to address properly the problem and laparoscopic approach is valuable once it is safe, fast and much less invasive than laparotomy. Ventriculoperitoneal shunting is a widely accepted technique for the treatment of hydrocephalus. Laparoscopy assisted shunt surgery in selected cases might be a less invasive and more effective option for intrabdominal manipulation. The laparoscopic approach allows a better catheter positioning, lysis of fibrotic bundles and peritoneal inspection as well, without any additional complication.

Core tip: Review of application of laparoscopy in ventriculoperitoneal surgery.

Shunt surgery represents a paramount procedure in neurosurgical practice, as the most widely performed central nervous system surgery. The preferred modality is the ventriculoperitoneal shunt (VPS), which connects the lateral ventricles and the peritoneal cavity[1-4].

Up to 80% of shunts implanted for treatment of hydrocephalus may fail at some point during the patient’s life, with approximately 30% failing within the first year. Although shunt placement is a common procedure and is considered safe, several complications may occur. Shunt-related complications, such as obstruction, overdrainage, loculation, and infection, sometimes require challenging surgical approaches associated with increased morbidity[1-6].

Abdominal complications of VPS are not rare, and the common mechanism involves epithelial responses to the presence of the catheter, which cause peritoneal retraction, intra-abdominal cerebrospinal fluid (CSF) collections, and adhesions. These complications usually worsen with multiple peritoneal revisions, sometimes resulting in peritoneal sclerosis that make further shunt implantation infeasible[7].

Within this context, the laparoscopic approach has grown in popularity as an alternative method for shunt implantation and especially for revision surgery after abdominal complications. This paper summarizes current concepts about its application.

We selected all papers in english, spanish and portuguese. The above search strategy yielded 240 manuscripts. Of these, 110 discussed other uses of laparoscopy not related to ventriculoperitoneal shunting, such as laparoscopy for abdominal and urological surgery. One hundred and thirty papers addressed the topic of interest. As some of these articles presented outdated data or very similar discussions, we selected 30 up-to-date manuscripts discussing different points of view to summarize recent, pertinent information about applications of laparoscopic surgery in ventriculoperitoneal shunting (Figure 1). 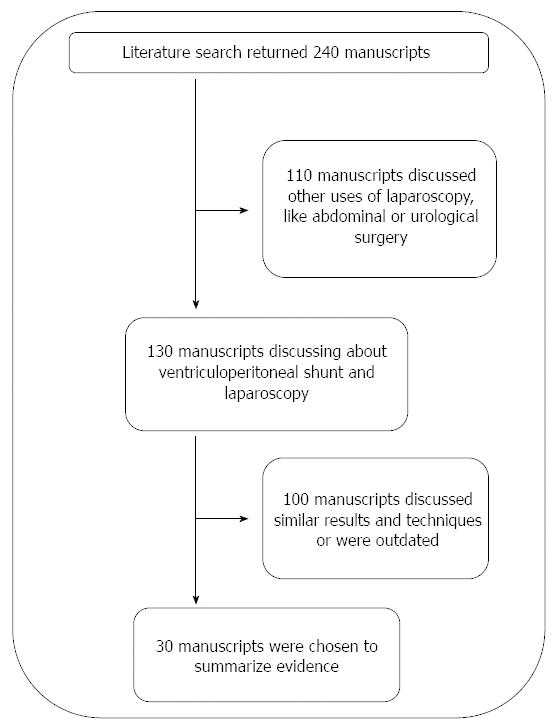 Both approaches have evolved. Currently, less invasive options are available both for laparotomy - such as small periumbilical incisions - and for laparoscopy, such as smaller and fewer incisions using 2-mm trocars[16-20].

Operating room time, blood loss, and hospital stay may be reduced in laparoscopic surgery, and complications are probably the same as with laparotomy[19].

In revision surgery for abdominal complications after VPS, the main findings may be abdominal adhesions, peritoneal thickening and retraction, and CSF pseudocysts. Additionally, after complicated VPS, catheter malfunctioning may occur due to migration, occlusion, and presence of foreign bodies[8,21-23].

In such scenarios, visualization of the whole abdominal cavity is essential to addressing the issue properly. The laparoscopic approach is valuable in this setting because it is safe, fast, and much less invasive than laparotomy, and is thus associated with fewer complications[24-27].

Ventriculoperitoneal shunting is a widely accepted technique for the treatment of hydrocephalus. The standard procedure to insert the peritoneal catheter requires an abdominal incision, muscle dissection, and opening of the peritoneum. The probability of lifetime shunt dysfunction is quite high. Abdominal complications are major causes of dysfunction. The peritoneal space is forced to accommodate a foreign body (catheter) and receive the flow of approximately 21 mL of CSF per hour, resulting in epithelial responses which may lead to inflammation and obstruction[1-4].

Several alternative procedures have been reported as temporary or permanent solutions to VPS failure, such as catheter implantation in other distal sites in the cervical, thoracic, and abdominal regions. The ventriculo-omental bursa shunt, with catheter insertion through the foramen of Winslow, has been described, even in cases of peritonitis or peritoneum adhesion. However, all of these options are considered third-line procedures, due to their higher complexity and high complication rates[27].

On the other hand, laparoscopic surgery for other purposes may interfere with VPS function and even cause obstruction. The impaction of soft tissue or air within the distal catheter as a consequence of peritoneal insufflation may cause shunt obstruction[28]. Furthermore, increased abdominal pressure may have a negative effect on intracranial pressure (ICP). Human data on the effects of laparoscopy on ICP are lacking, but ICP increases significantly with abdominal insufflation and correlates with laparoscopic insufflation pressure. Thus, laparoscopy should be performed cautiously in patients with elevated baseline ICP[29].

In conclusion, we believe that laparoscopic-assisted shunt surgery in selected cases might be a less invasive and more effective option for intra-abdominal manipulation. The laparoscopic approach also enables better catheter positioning, lysis of fibrotic bundles, and peritoneal inspection without any additional complications.