Nodular lymphoid hyperplasia of the gastrointestinal tract is characterized by the presence of multiple small nodules, normally between between 2 and 10 mm in diameter, distributed along the small intestine (more often), stomach, large intestine, or rectum. The pathogenesis is largely unknown. It can occur in all age groups, but primarily in children and can affect adults with or without immunodeficiency. Some patients have an associated disease, namely, common variable immunodeficiency, selective IgA deficiency, Giardia infection, or, more rarely, human immunodeficiency virus infection, celiac disease, or Helicobacter pylori infection. Nodular lymphoid hyperplasia generally presents as an asymptomatic disease, but it may cause gastrointestinal symptoms like abdominal pain, chronic diarrhea, bleeding or intestinal obstruction. A diagnosis is made at endoscopy or contrast barium studies and should be confirmed by histology. Its histological characteristics include markedly hyperplasic, mitotically active germinal centers and well-defined lymphocyte mantles found in the lamina propria and/or in the superficial submucosa, distributed in a diffuse or focal form. Treatment is directed towards associated conditions because the disorder itself generally requires no intervention. Nodular lymphoid hyperplasia is a risk factor for both intestinal and, very rarely, extraintestinal lymphoma. Some authors recommend surveillance, however, the duration and intervals are undefined.

Nodular lymphoid hyperplasia (NLH) of the gastrointestinal tract is characterized by the presence of multiple small nodules, between 2 and 10 mm in diameter. Although it may be detected in the stomach, large intestine or rectum[1], it is more often distributed in the small intestine. Histologically, NLH is defined by markedly hyperplastic, mitotically active germinal centers, and well-defined lymphocyte mantles found in the lamina propria and/or in the superficial submucosa[2].

The incidence is unknown, nevertheless, NLH is considered to be a rare condition in adults[3-6] and published literature includes mainly case reports and small series of patients; whether this relates to endoscopy underreporting or to the true rarity of the condition in adults is unclear[7].

NLH occurs in all age groups[3,8], but primarily in children under ten years of age, when general lymphatic hyperplasia is common[9]. Reported gender distribution of this condition is conflicting[3,10].

NLH has been divided into diffuse nodular lymphoid hyperplasia and focal forms, mainly involving the terminal ileum, rectum, or other sites in the gastrointestinal tract[1,2,11].

Pediatric NLH is generally restricted to the rectum, colon, and terminal ileum, has a benign course, and usually regresses spontaneously[3,12-14]. It has been linked to refractory constipation[15], viral infection, and food allergies[12,13]; however it can be observed in healthy children[16]. In adults, the prognosis is much less certain, and NLH can be divided into those with or without immunodeficiency[17], but, normally, it is associated with immunodeficiency and Giardia infection[18].

The pathogenesis of NLH is largely unknown, but there are some theories that explain this condition and vary according to the presence or absence of associated immunodeficiency.

In immunodeficiency states, in order to compensate for functionally inadequate intestinal lymphoid tissue, NLH may result from an accumulation of plasma-cell precursors due to a maturational defect in the development of B-lymphocytes[11,19].

NLH in the absence of immunodeficiency disorders may be related to immune stimulation of the gut lymphoid tissue. A frequently proposed hypothesis implicates an intestinal antigenic trigger, possibly infectious, that leads to repetitive stimulation and eventual hyperplasia of lymphoid follicles. The frequent association between Giardia infection and NLH suggests this, even in the absence of humoral immunodeficiency[8].

Chiaramonte et al[20] hypothesized that NLH could be a transitional stage in the development of a malignant lesion, or possibly an early lymphomatous lesion. NLH is a risk factor for intestinal lymphoma and there are studies suggesting that lymphoid-associated colorectal mucosa might be the origin of many non-protruding adenomas and consequently of non-protruding early colorectal carcinomas[21].

NLH has been reported in immunocompromised and immunocompetent adult patients.

Approximately 20% of adults with common variable immunodeficiency disease (CVID) are found to have NLH[6,19,22-31]. NLH is also associated with IgA deficiency[22,32-35] and has also been reported in patients with human immunodeficiency virus (HIV) infection[36].

CVID is characterized by the significantly reduced levels of IgG, IgA, and/or IgM, impaired antibody response, with the exclusion of other causes of hypogammaglobulinemia. Patients typically present with recurrent bacterial infections of the upper and lower respiratory tracts, autoimmune disease, granulomatous/lymphoid infiltrative disease, and increased incidence of malignancy. NLH in CVID patients is usually more generalized, involving the proximal small intestine, in addition to the distal ileum and proximal colon[22].

Selective IgA deficiency is the most common primary immunodeficiency, estimated at 1 in 300 to 700 in Caucasians, (IgA < 7 mg/dL with normal or increased levels of other immunoglobulins). The majority of patients are asymptomatic, although the absence of IgA has been associated with recurrent upper respiratory infections (frequently in those with concomitant IgG2 subclass deficiency), autoimmune disorders, allergic diseases and gastrointestinal diseases, namely NLH[37].

The link between NLH and celiac disease seems to be rare[3,32]. It is important to underline that CVID patients may present small-bowel pathology similar to classic celiac sprue, known as “pseudo-celiac” pattern, with short villi, crypt hyperplasia, intraepithelial lymphocytosis, and, in some cases, an increase in apoptotic bodies in crypt epithelial cells. The diagnosis of CVID should be suspected when the number of plasma cells are reduced or absent in the lamina propria, and patients do not produce antibodies to tissue transglutaminase, endomysium, or gliadin. CVID patients typically do not respond to gluten withdrawal and do not express the genes associated with celiac disease, HLA-DQ2 and HLA-DQ8[3,37].

Helicobacter pylori (H. pylori) infection has also been implicated in NLH[18,42]. Khuroo et al[18] reported a large cohort of patients (40 patients) with NLH, etiologically related to H. pylori infection. Patients with eradicated H. pylori showed significant clinical response and regression/resolution of the lesions, in contrast to patients with persistent H. pylori infection. The location, in these cases, was limited to the postbulbar duodenum (second and third part) and to the duodenojejunal junction. None of the patients included in this study had an immunodeficiency or giardiasis. NLH was attributed to immune stimulation by prolonged and heavy H. pylori infection.

There are also several case reports where no relation with any of the diseases described above was found[2,47,48].

NLH can present as an asymptomatic disease (in the majority of the patients) or with gastrointestinal symptoms like abdominal pain, chronic diarrhea, bleeding, intussusception or intestinal obstruction[5,49].

Colón et al[12] published a retrospective analysis including 147 children with NLH and 32% of the cases had bright red blood emission per rectum. In adult patients, NLH uncommonly causes gastrointestinal bleeding and may manifest as massive obscure[51,52], recurrent[53,54] or rectal bleeding[55].

The diagnosis of NLH is established by endoscopy or contrast barium studies and confirmed histologically. There are several other entities that can mimic NLH, and since misdiagnosis could lead to overtreatment of a benign condition, histopathology is fundamental for the diagnosis[5].

Endoscopic features of NLH include nodules ranging in size from 2 mm to 10 mm, but normally not exceeding 5 mm in diameter (Figure 1A and B). These nodules may present in the stomach, small intestine (terminal ileum is the most common), and colon/rectum. Colonic lymphoid nodules may appear as red macules, as a circumferential target lesions (halo sign), or as raised papules[56,57]. When the large intestine is involved, the rectum is most commonly implicated[58,59]. In NLH involving the colon, the endoscopic appearance can be strikingly similar to polyposis syndromes, including familial adenomatous polyposis, multiple lymphomatous polyposis, juvenile or hamartomatous, polyposis and serrated polyposis syndrome, among others[58]. There is a case report of an adult immunocompetent patient with NLH in a defunctionalized colon, following ileostomy performed because of localized regional ileitis[60]. This had only been previously described in children[61]. 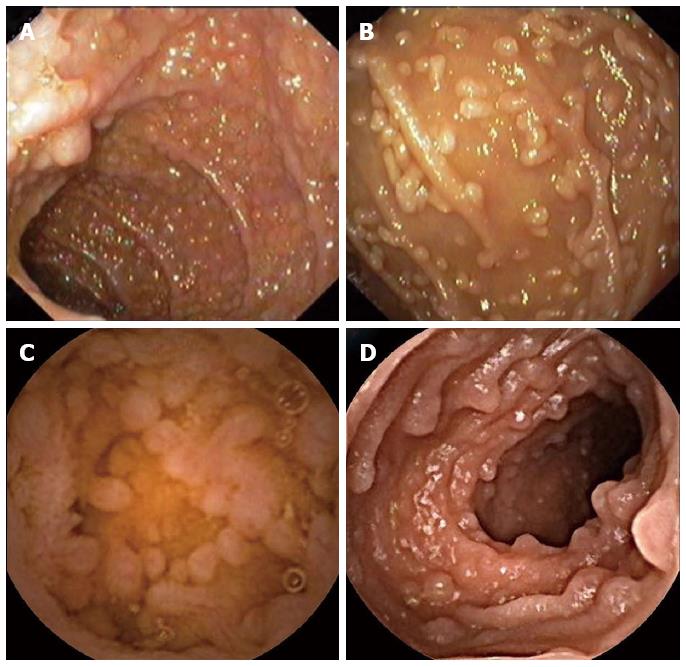 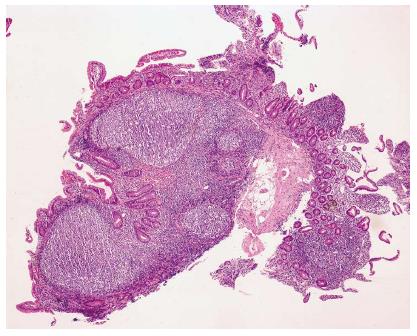 In NLH involving the small bowel, small bowel barium swallow and, mainly, capsule endoscopy are important for the diagnosis, to exclude complications (like lymphoma), and to determine disease extension in the small bowel (Figure 1C and D).

In the presence of NLH, immunodeficiency (CVID, selective IgA deficiency and HIV infection), giardiasis, celiac disease, and H. pylori infection should be suspected.

In general, colonic NLH is considered of no clinical significance[7,55].

NLH can resemble both clinically and histologically malignant lymphoma[62]. It can be distinguished by the polymorphic nature of the infiltrate, the absence of significant cytologic atypia, and the presence of reactive follicles within the lesion, and by use of immunohistochemical or molecular analysis[1]. Among primary intestinal lymphomas, mantle cell lymphoma is most frequently represented by multiple polypoid lesions[63]; however, less frequently, extranodal marginal zone lymphoma or mucosa-associated lymphoid tissue-MALT[64], and follicular lymphoma[65] also show multiple lymphomatous polyposis.

Gastric involvement is rare[1]. The differential diagnosis of gastric lymphoid lesions includes reactive processes and malignant lymphoma. In such cases, it is important to rule out extranodal marginal zone lymphoma[66]. Some gastric lesions are associated with chronic peptic ulcers, but ulceration is absent or insignificant in focal lesions located in the intestine[1].

Treatment is directed to associated conditions because the disorder itself generally requires no intervention[5].

In both immunodeficient and immunocompetent patients with NLH, the eradication of Giardia often causes the intestinal symptoms to disappear[11]; nevertheless, in most reported cases, successful treatment of the infection did not lead to a regression in the number or size of the lymphoid nodules[24,67], although this also has been described[17].

A study from Japan and Sweden also suggests an association between colonic lymphoid nodules and non-protruding colorectal neoplasia, adenomas, and early carcinomas[21].

Considering the risk of malignant transformation, surveillance capsule endoscopies and small bowel series are recommended by some authors in small bowel NLH[59] however, the duration and intervals of such surveillance are undefined; biopsy of enlarging lymphoid nodules should be performed to exclude lymphomatous transformation[32].

There are several missing pieces in the NLH puzzle, including: epidemiological data (incidence, prevalence, gender distribution), pathogenesis, and clarification about the role that other endoscopic or non-endoscopic procedures have in NLH evaluation, such as, enteroscopy. Most importantly an essential question remains regarding the selection of patients and timing for surveillance.