Video capsule endoscopy (VCE) is a safe innovative tool for investigating obscure gastrointestinal bleeding, Crohn’s disease and other small bowel pathologies. The capsule is usually excreted with faeces within 24-48 h. Retention of capsule rarely occurs, and it usually depends on the indication of VCE. The longest reported case of capsule retention in the literature is 2.5 years. Surgical approach is considered effective to retrieve the retained capsule. We present a case of asymptomatic retention of capsule for four and half years in a 49-year-old man who underwent VCE to explore the cause of obscure gastrointestinal bleeding. It was successfully retrieved endoscopically. We will also briefly review the literature regarding the causes, different presentations and management of capsule retention.

Core tip: We present the longest case of asymptomatic video capsule retention in the literature. With our case we would like to highlight that asymptomatic video capsule retention is not an indication for surgical retrieval. Capsule can retain for long time without harm. Surgical retrieval should be reserved for those patients in whom the expectant management, medical management and endoscopic therapy fails or in patients who are symptomatic with intestinal obstruction or perforation.

Video capsule endoscopy (VCE) since its approval from Food and Drug Administration in August 2001 has become the innovative tool for investigating small bowel pathology mainly to determine the cause of obscure gastrointestinal bleeding, Crohn’s disease, polyposis syndromes and evaluation of patients with complicated celiac disease, etc[1]. VCE is noninvasive and is considered a safe procedure because the capsule is usually excreted with the feces within 24-48 h[2]. However, if capsule retention occurs, it would help determine the underlying cause of gastrointestinal pathology. But there is always a concern of capsule retention which could potentially lead to acute intestinal obstruction and perforation requiring surgery who otherwise would have been treated medically[3,4]. Furthermore, it is rare for video capsule to stay in the GI tract for long duration without any symptoms. We report a case of the longest duration of retention of video capsule which was retrieved successfully with an endoscope.

A 49-year-old man with history of ulcerative colitis-status post subtotal colectomy done 13 years ago was referred to gastroenterology clinic by his family physician for evaluation of occasional gastrointestinal bleeding with drop in his hemoglobin to 8.4 g/dL from baseline of 10-11 g/dL. Since the time of subtotal colectomy, his underlying colitis remained stable. His past medical history included Ankylosing Spondylitis for which he was following rheumatology. He was managed only with physical therapy not requiring medication.

His daily medications included iron, folic acid and B12 supplements. He denied use of any Non-steroidal anti-inflammatory drugs (NSAIDs). There was no history of smoking and alcohol abuse in the past. His family history was significant for ulcerative colitis in father; however, no history of bowel cancer was reported. The patient did not admit to have abdominal pain, nausea, vomiting. There was no history of change in bowel movements. Initially he was losing weight following surgery but for last two years his weight has been stable.

He then underwent upper endogastroduodenoscopy (EGD), flexible sigmoidoscopy later followed by colonoscopy which did not reveal the cause of the gastrointestinal bleed. He was planned for VCE. First he underwent small bowel follow through (SBFT) which demonstrated all normal appearing small bowel loops with patent ileorectal anastomosis. Subsequently, he underwent VCE uneventfully. He did not report spontaneous passage of the capsule in one week which was confirmed by abdominal X-ray revealing retained capsule in right lower quadrant of abdomen as shown in Figure 1A. The result of VCE did not reveal any pathology causing obscure gastrointestinal bleeding and retained capsule. He did not have features of bowel obstruction both clinically and radiographically. He followed up periodically for 2 mo with serial imaging studies which showed capsule in different parts of the loops of bowel (Figure 1B).

Then he lost to follow up with our gastroenterology department as he moved out from the area. Subsequently, he returned for follow up for his ulcerative colitis after 4 years. Even at this time he did not report to have any symptoms of intestinal obstruction such as nausea, vomiting, abdominal pain, diarrhoea, etc. His abdominal X-ray at this time again demonstrated persistent retained capsule overlying the right upper quadrant of abdomen without any evidence of intestinal obstruction (Figure 1C). He was discussed with several options of management including surgery to retrieve the retained capsule. But he preferred non-surgical approach as he explained that he was not having symptoms due to the retained capsule. Computed tomography (CT) abdomen reported the capsule in the bowel lumen at anastomotic site in the right upper quadrant (Figure 2). He then underwent colonoscopy with successful retrieval of the intact 4 year 5 mo 21 d-old retained capsule by a roth net basket (Figure 3) from patent surgical anastomosis at the site of prior diverting loop ileostomy located at 120 cm proximal to the anal verge. During the follow up after two months, the patient did not report to have any consequences from the capsule retrieval procedure. 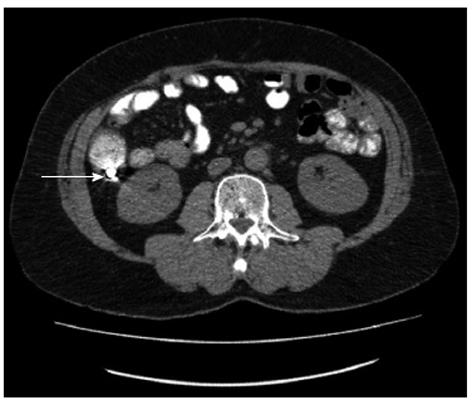 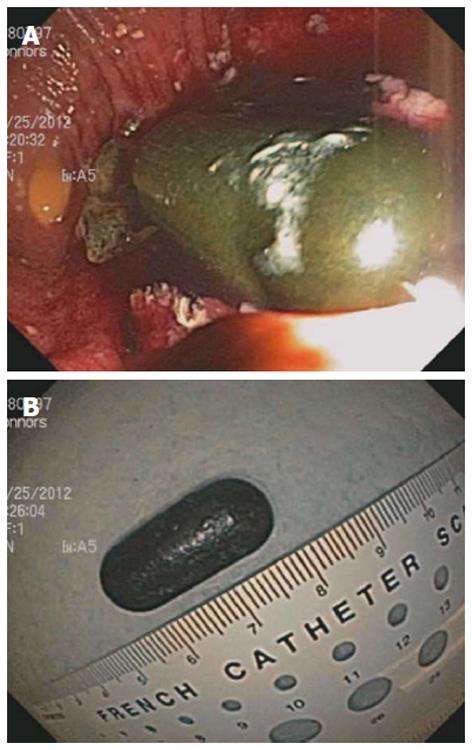 Figure 3 Capsule seen in colonoscopy (A) and video capsule was retrieved intact after 4 year 5 mo and 21 d with endoscopically (B).
DISCUSSION

VCE is a simple, safe, non-invasive, reliable procedure which is well accepted and tolerated by the patient, without requiring any sedation, surgery or radiation exposure[5]. Though rare, capsule retention is the major risk following VCE. The International Conference on Capsule Endoscopy (ICCE) 2005 defines capsule retention as having a capsule endoscope remain in the digestive tract for minimum 2 wk. Capsule retention is further defined as the capsule remaining in the bowel lumen unless it is recovered medically, endoscopically or surgically[6].

Retention rate of video capsule is variable depending mostly on the clinical indication for VCE[7-10]. It ranges from 0% in healthy subjects, to 1.5% in patients with obscure gastrointestinal bleeding, to 5% in patients with suspected Crohn’s disease and 21% in patients with intestinal obstruction[7,8]. In a recently published systematic review by Liao et al[9], there were 184 capsule retentions in both prospective and retrospective studies of total 22840 procedures giving a pooled retention rate of 1.4%. The retention rate in obscure gastrointestinal bleeding, Crohn’s disease, neoplastic lesions are 1.2%, 2.6% and 2.1% respectively[9]. The other causes of retention are NSAID induced enteropathy, post-surgical stenosis, adhesions, tuberculosis, ischemia and radiation enteritis[9,11]. Furthermore, rare causes include Meckel’s diverticulum, peptic ulcer, cryptogenic multifocal stenosing enteritis with frequencies of less than 2% of total capsule retention[7]. Based on these studies, the probability of capsule retention is higher in Crohn’s disease, NSAIDs induced enteropathy and history of abdominal surgeries. Our patient also had the history of abdominal surgery such as subtotal colectomy which increased the risk of capsule retention. Thus obtaining the good medical history is essential to prevent the capsule retention. There are no other accepted methods including the imaging studies prior to VCE are useful to prevent occurrence of capsule retention[6,12].

The studies have suggested that asymptomatic capsule retention can undergo expectant, medical and endoscopic management or even surgical intervention[14-17]. Meanwhile, the longest duration of retention is 2.5 years reported by ICCE without reporting the sequelae associated with long term retention of capsule[6]. But the patient should not undergo magnetic resonance imaging[17]. Authors have advocated that surgical intervention not only allows removal of the capsule but also can remove the offending pathology causing capsule retention[9,14-16]. In a systematic review of 184 capsule retentions from Liao et al[9], retained capsules were excreted spontaneously or by pharmaceutical manipulation in 15%, endoscopically in 12% and the majority 58.7% were removed surgically. Baichi et al[16] studies five permanent capsule retention out of which two cases had successful endoscopic retrieval and remaining three cases required surgical intervention. Another study presented three cases of capsule retention out of which two patients needed surgery for retrieval and other patient passed capsule spontaneously in six months with medical treatment[14]. Therefore, these studies have demonstrated that majority of patients eventually require surgical retrieval but non-surgical management could be the best option to begin with in a patient without symptoms of acute intestinal obstruction. This is also shown in another large study in which out of 32 retained capsules, 21 (65.6%) patients received medical treatment resulting in spontaneous passage of the capsule in 11 (34.4%). Rest 10 (31.3%) patients ultimately underwent surgical intervention to retrieve the capsule[15]. Medical management usually consists of use of anti-inflammatory agents and colonoscopy preparation fluids or enemas[10,18]. There are few case reports of capsule retention causing intestinal obstruction in patients with underlying Crohn’s disease and history of abdominal surgeries who were successfully treated with disimpaction with intravenous steroids and diatrizoate upper GI series and enemas[17,18].

Nevertheless, there are only few cases of complication reported in the literature due to retained capsule. In a recent analysis of 2300 capsule examinations, six patients had acute obstructive symptoms and also reported one death related to complications after acute surgical capsule retrieval[3]. There is also a case report of retained capsule causing intestinal perforation after two months following VCE in an elderly man who underwent VCE for evaluation of anemia[19]. There is another case of capsule impaction and subsequent fracture of the capsule in the small bowel six months following VCE[20]. Thus, though rare, we need to keep in mind that there is a possibility of acute complication of capsule retention.

With our case we would like to make physicians aware of the possibility of asymptomatic capsule retention even after four to five years following VCE. We also highlight that retained capsule can be retrieved non surgically even if it is retained for long period of time in the patient who is asymptomatic.

We would like to thank the entire Geisinger’s Endoscopy Department for supporting us in writing up this case report.