Core tip: Gastric serrated adenomas have a particular proclivity to progress to invasive carcinoma; 75% or 15% of the 20 cases that are now in record - including the present one - exhibited invasive carcinoma.

Ninety years ago Konjetzny[1] described mucosal polyps in gastric specimens. Six years later Stewart[2] found among 11000 necropsies, 47 gastric polypoid lesions with mucosal aberrations that he called adenomas. Since then, much attention has been centred on gastric adenomas due to their propensity to evolve into invasive carcinoma[3-11].

Throughout the years several classifications of gastric polyps have been proposed[12-15]. Based on the endoscopic appearance, endoscopists have classified gastric polyps (adenomas being a histologic diagnosis) as flat[16] (also called non-polypoid or non-protruding) and polypoid[11] (also called protruding). Non-protruding polyps that appear thinner than the surrounding mucosa are called, depressed lesions[17]. This endoscopic classification was subsequently confirmed at the histological level[18]. Based on the gross appearance, Goldstein et al[19] classified gastric polyps into flat topped, villiform, and pedunculated and Ming et al[12] into flat and papillary. Based on their histological configuration, gastric polyps were classified by Elster[14] into focal foveolar hyperplasia, hyperplasiogenic polyps, tubular and villous adenomas, and by Appelman[20] into non-neoplastic (focal foveolar hyperplasia and hyperplastic polyps), non-neoplastic possibly hamartomatous (Peutz-Jehgers-type polyps), and neoplastic adenomas (with or without invasive carcinoma). Nakamura[7] grouped gastric polyps into types I and II (hyperplastic polyps), and types III and IV (adenomas), and Kozuka[10] grouped them into common type (hyperplastic, adenomatous, and carcinomatous polyps), special-type hamartoma (Peutz-Jehgers polyps, juvenile polyps, polyps in Cronkhite-Canada syndrome, and fundic gland cyst polyps), polypoid lesions (inflammatory polyps and polypoid carcinoma), and polyps resulting from a submucosal mass.

In 2001 we reported a novel histologic phenotype of gastric adenoma characterized by protruding glands with lateral saw tooth-like notches due to scalloped epithelial indentations[21]. The serrated elongations were lined with stratified dysplastic cells containing abundant eosinophilic cytoplasm; it was called gastric serrated adenoma since it mimicked other serrated adenomas evolving in the colon[22] the appendix[23], the duodenum[24], the pancreatic duct[25] and the Barretts’s esophagus[26]. Remarkably, this adenoma phenotype was not included in any of the aforementioned classifications of gastric polyps[11,18,20-22]. One possible explanation could be that gastric serrated adenomas were classified together with gastric villous adenomas. Another possible explanation could be that this type of lesion is very rare in the stomach. In this context, it should be mentioned that no case of serrated adenoma was recorded in a survey of 67 consecutive gastric adenomas[18], nor in larger series of gastric adenomas in the literature[5,6,10-14].

The purpose of the present communication is to report another case of gastric serrated adenoma, this time occurring in a patient with Lynch syndrome, an autosomal dominant genetic condition with an increased risk to develop cancer in various organs, including the stomach.

The patient is a 57-year-old male with confirmed MSH2 mutation Lynch syndrome. His mother was treated for endometrial cancer and an uncle for colorectal cancer. In 1995 the patient was operated for cancer in the right colon. In 2007, a second colon cancer was found at surveillance colonoscopy, this time in the transverse colon. A total colectomy with ileo-rectal anastomosis was performed. In 2009 he was operated for a metastasis in the small bowel. Histology revealed a metastasis from colon cancer.

A gastro-esophagoscopy was done in October 2012, because of protracted gastro-esophageal reflux. Histology showed short Barrett´s esophagus with low-grade dysplasia. During the same séance, a 10 mm in diameter polypoid lesion was detected in the stomach (Figure 1). The polyp was endoscopically excised. No complications occurred during or after the procedure. The histological examination of the gastric polypoid lesion revealed a serrated adenoma showing protruding glands with lateral saw tooth-like notches due to scalloped epithelial indentations with high-grade dysplasia (Figure 2). In addition, an adenocarcinoma invading the submucosal tissues was demonstrated (Figure 3). The invasive carcinoma component retained the serrated configuration and the cytological features of the adenoma (Figure 4). 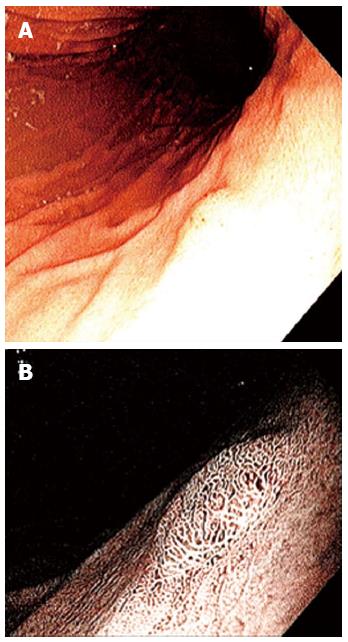 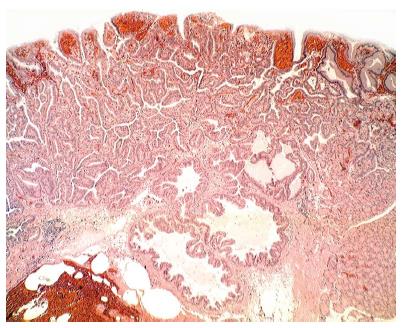 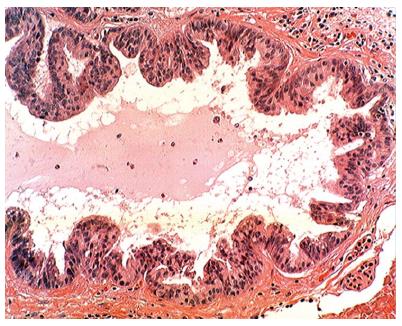 Here, we report the first case of serrated adenoma of the stomach in a patient with Lynch syndrome. Lynch syndrome is an autosomal dominant genetic condition which has a high risk of colon cancer as well as other cancers including endometrium, ovary, stomach, small intestine, hepatobiliary tract, upper urinary tract, brain, and skin. The increased risk for these cancers is due to inherited mutations that impair DNA mismatch repair. The occurrence of this case of gastric serrated adenoma in a patient with Lynch syndrome implies that this adenoma phenotype may develop not only sporadically but also in patients with hereditary traits.

Paradoxically, eight out of 20 cases of serrated adenoma of the stomach now in record (including present case) have been reported from a single Institution[21,27,28]. The increased awareness of the existence of these gastric aggressive adenomas may result in more cases being reported from other Institutions in the future.