Ischemic colitis accounts for 6%-18% of causes of acute lower gastrointestinal bleeding. It is more often multifactorial and more common in elderly. Drugs are considered important causative agents of this disease with different mechanisms. In this paper, we describe a 37-year-old otherwise healthy female presented with sudden onset diffuse abdominal pain and bloody stool. Radiologic, colonoscopic and histopathologic findings were all consistent with ischemic colitis. Her only suspected factor was hydroxycut which she had been taking for a period of 1 mo prior to her presentation. Her condition improved uneventfully after cessation of hydroxycut, bowel rest, intravenous hydration, and antibiotics. This is a first case of ischemic colitis with clear relationship with hydroxycut use (Naranjo score of 7). Our case demonstrates the importance of questioning patients regarding the usage of dietary supplements; especially since many patients consider them safe and do not disclose their use voluntarily to their physicians. Hydroxycut has to be considered as a potential trigger for otherwise unexplained ischemic colitis.

The mechanisms of developing ischemic colitis include hypoperfusion due to systemic hypotension secondary to sepsis, hemorrhage, cardiac failure or any other conditions that might cause hypotension. Vasoconstriction in the colonic vessels due to hypotension or certain substances such as cocaine and other sympathomimetic agents is another mechanism. The third mechanism is thromboembolism due to inherited or acquired hypercoagulable conditions such as antiphospholipid antibody syndrome. Also increased intracolic pressure is another mechanism for ischemic colitis by causing decrease of the blood flow into the colon which can occur after screening colonoscopy. Final mechanism is vasculitis involving colonic vessels such as polyarteritis nodosa[1,2].

Advanced age, aortic surgery, diabetes mellitus, hypertension, and peripheral vascular disease have been also suggested to be predisposing factors for ischemic colitis[1]. Hydroxycut is an over-the-counter herbal product that has been used for purpose of the weight loss, body building and as an energy enhancer. It is a multicomponent dietary supplement which has been reformulated twice after warnings from the food and drug administration (FDA). It has been linked to serious medical conditions, mostly acute liver toxicity. We describe here a case of ischemic colitis developed in a healthy young female after a month of hydroxycut consumption for purpose of weight loss in the absence of any other risk factors for ischemic colitis.

A 37-year-old otherwise healthy female presented with severe crampy abdominal pain. Pain was diffuse but more pronounce in left lower quadrant of her abdomen. The pain was also associated with nausea and one episode of non-bloody, non-bilious emesis. She had two bloody bowel movements at home and later on she had another two with blood clots in the stool at the emergency room. She denied fever, chills, urinary symptoms, similar symptoms in the past, recent travel, sick contact, or recent use of antibiotics or non-steroidal anti-inflammatory drugs (NSAIDs). She had no significant past medical history. She had hysterectomy 4 years ago for repeated abnormal Pap smears. She was not on any prescribed medications. She denied smoking or using illicit drugs, but was drinking alcohol occasionally. She had no family history of major medical problems including gastrointestinal diseases or blood disorders. 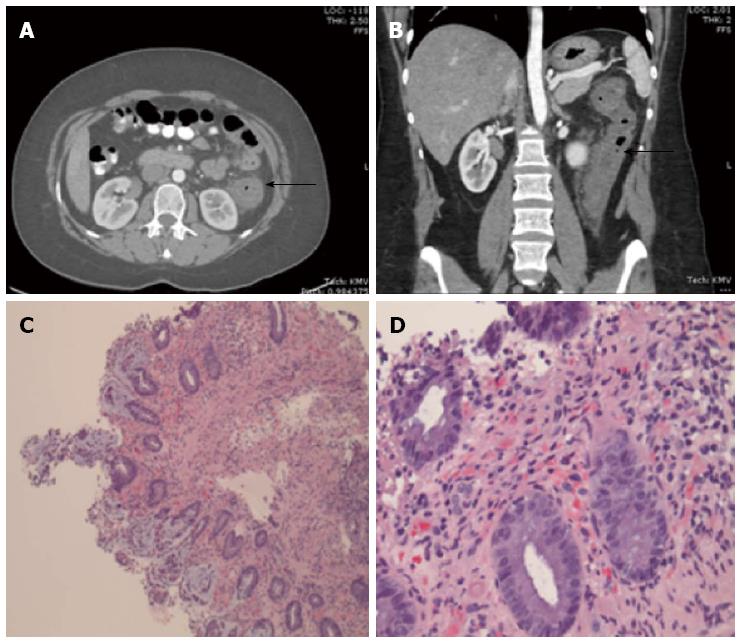 Colonoscopy revealed erythematous and edematous colonic mucosa with multiple superficial erosions and ulcerations from the distal descending colon up to the mid-transverse colon which was consistent with moderately severe ischemic colitis (Figure 2). Multiple biopsies were taken which were consistent also with ischemic colitis (Figure 1C, D). CT angiogram was performed and did not identify any stenosis, occlusion, or thrombosis in the intra-abdominal vessels. 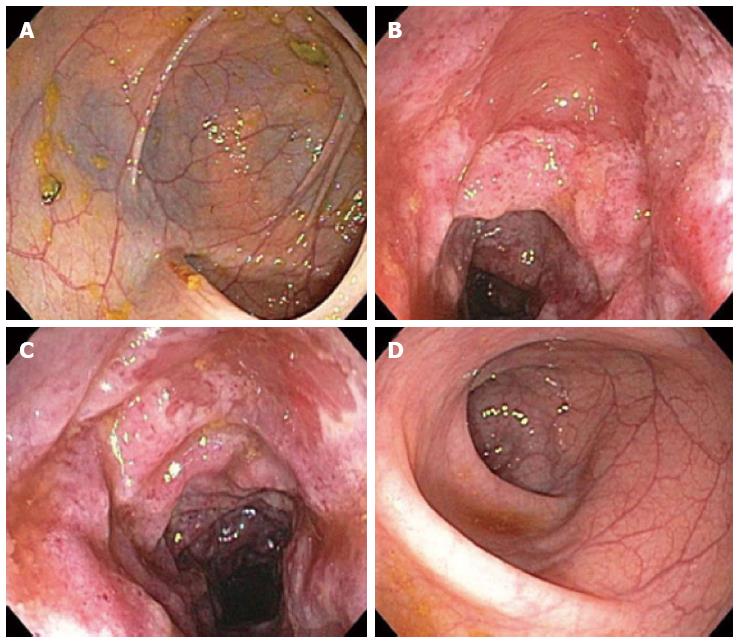 On further questioning to determine the etiology of ischemic colitis in our patient, she reported taking hyrdoxycut in a recommended dose by the manufacturer for weight loss purposes for a period of one month prior to her presentation.

She was treated with intravenous fluids, bowel rest, intravenous antibiotics, and discontinuation of hydroxycut. Her hospitalization course was uneventful and she was discharged home 3 d later. She was counseled to stop hydroxycut consumption.

This case illustrates the importance of investigation for potential triggers for ischemic colitis when the classical risk factors are absent. The causes of ischemic colitis vary from systemic hypotension, aortoiliac surgery, atherosclerosis, thromboembolic events, vasculitis, to varieties of drugs[3].

Drugs have been implicated in the development of ischemic colitis by different mechanisms including decreasing blood flow via systemic hypotension such as angiotensin-converting enzyme inhibitors, causing vasospasm such as pseudoephedrine, promoting thromboembolism such as oral contraceptives, causing vasculitis such as gold salts, and increasing intracolic pressure such as alosetron[4]. The mechanism of some drugs reported to cause ischemic colitis has not yet determined. The Table 1 below shows a list of medications and their mechanisms for causing ischemic colitis[4].

A significant proportion of Americans and people all over the world are using herbal supplements for different purposes based on geographic, race, and cultural backgrounds. In a survey in 2007, 17.7% of adults in the United States and 3.9% of children were using some kind of “non-vitamin, non-mineral, natural products” within the last 12 mo[5]. Factors associated with herbal supplements use are middle age, female gender, uninsured persons, and higher education[6]. Fifty eight percent of users do not disclose their use to their physicians[6].

Among the most popular herbal supplements used in the United States are weight-loss products as obesity is becoming epidemic in the United States affecting more than one-third of population[7]. These products are considered dietary supplements and are not regulated by the FDA[8]. Dietary supplement manufacturers only need low-level of evidence for their efficacy and safety to get market approval, with most studies of small sample size for a short duration[9]. In a systematic review of 19 human studies in 2009, the average number of participants was 64.4 (range: 24-153), and the average study duration was 15 wk (range: 2-36 wk)[9,10]. Under Dietary Supplement Health and Education Act, once a product is marketed, it is the FDA’s responsibility to prove it unsafe before withdrawing or restricting its use, as opposed to conventional medications, for which pharmaceutical companies have to prove the safety of drug before marketing.

Hydroxycut is one of the most sold products among all weight-loss supplements. It is claimed to be a weight-loss aid, fat burner, and energy enhancer. Hydroxycut was introduced first containing ephedra as one of its components; however, after banning ephedra containing products by FDA in February 2004 for severe cardiovascular and neurologic toxicity, hydroxycut was withdrawn from the market and reformulated to exclude ephedra[4,11]. In May 2009, FDA warned consumers to stop taking any hydroxycut products due to 23 reported cases of severe serious health events related to Hydroxycut, especially liver toxicity resulting in one death[12].

The safety of hydroxycut (as well as its efficacy) is unstudied extensively and it is based on post-marketing case reports. Since 2004, after ephedra was withdrawn from hydroxycut, it has been reported 30 cases of serious medical conditions associated with hydroxycut ingestion including hepatotoxicity, in form of hepatocellular injury, immune-mediated hepatitis, or cholestasis patterns (n = 26), reversible cerebral vasoconstriction syndrome (n = 1), hypertensive retinopathy (n = 1), rhabdomyolysis (n = 1), atrial fibrillation (n = 1)[13-24].

It has not determined clearly which substance(s) is responsible for reported toxicities. It has been suggested hydroxycitric acid, Garcinia cambogia, chromium, epigallocatechi-2-gallate (EGCG), green tea extract (as Camellia sinensis), and contaminated chemicals or bacteria as the cause of hepatotoxicity; however studies’ results are conflicting[13,16,20,26,27]. EGCG in Hydroxycut has been suggested as the suspected causative component for developing atrial fibrillation by blocking the atrial-specific KCNA5 potassium channel[24].

The proposed mechanism for hydroxycut-induced ischemic colitis is the local vasoconstriction of vessels supplying the colon due to one or more substances. High dose of caffeine in hydroxycut has been suggested as a sympathomimetic agent causing vasoconstriction in the brain which might cause similar effects in other organs such as colon; however, it is unproven[21,22,28]. Chromium in prior formulas is another suggested substance to cause vasoconstriction by activating sympathetic nervous system[23]. Other components are also possible causes by causing direct or indirect vasoconstriction in susceptible subjects; especially hydroxycut has multiple ingredients with limited known information regarding their precise mechanisms of action. Hydroxycut may work in serotonergic or adrenergic systems as many conventional weight-loss medications, however, it is difficult to identify the exact ingredient or mechanism by which hydroxycut works or causes its side effects.

While causation is impossible to confirm, the temporal relationship between initiation of this product and development of ischemic colitis, in the light of absence of other etiologies, raises the suspicion of hydroxycut as a potential culprit in this case. When applying Naranjo nomogram in our patient, a score of 7 was granted indicating a probable likelihood (Table 2).

In conclusion, this is the first case report of ischemic colitis associated with ephedra-free weight-loss supplement hydroxycut. Our case demonstrates the importance of questioning patients regarding the usage of these supplements; especially since many patients consider them safe and do not disclose their use voluntarily to their physicians. Hydroxycut has to be considered as the potential cause for otherwise unexplained ischemic colitis.