Here we present the case of a 35-year-old female patient with long standing dyspepsia and imaging studies showing the presence of multiple cysts in the head and tail of the pancreas. The patient underwent endosonography that confirmed the presence of multiple simple cysts throughout the entirety of the pancreas without dilation of the pancreatic duct. The majority of the cysts were less than one centimeter in size, and the largest cyst showed a honeycomb appearance. Cytology of aspirates from the two largest cysts was compatible with benign pancreatic cysts. Endosonography also revealed cysts within the left kidney and spleen. Genetic testing confirmed Von Hippel-Lindau disease. We highlight this case because it is unusual for Von Hippel-Lindau disease, a rare clinical entity, to present solely with cysts in the absence of more common manifestations, such as hemangioblastomas in the central nervous system and malignancy.

Core tip: This is a case of a rare clinical entity, Von Hippel-Lindau disease, with an unusual presentation. The patient had only pancreatic cysts without more common manifestations, particularly hemangioblastomas and malignancy. The imaging methods used in this case were important for the diagnosis, particularly endosonography, which showed the honeycomb appearance of the pancreatic serous cystadenomas. This case should alert endoscopists to the possible occurrence of this hereditary disease in the presence of multiple pancreatic cysts without other manifestations or family history.

Von Hippel-Lindau (VHL) disease is an autosomal dominant disorder caused by germline mutations in the VHL tumor suppressor gene. VHL mutations predispose patients to the development of a variety of tumors, which are most commonly retinal and central nervous system hemangioblastomas, clear cell renal carcinoma and pheochromocytomas[1,2]. Hemangioblastomas are the most common tumors associated with VHL disease and affect 60% to 84% of patients[3]. There are few studies assessing pancreatic lesions in VHL disease[4-7]. Hammel et al[4] found pancreatic involvement in 77.2% of patients with VHL, and these pancreatic lesions can manifest as cysts (91.1%), serous cystadenomas (12.3%), neuroendocrine tumors (12.3%) or combined lesions (11.5%). However, the frequency of the pancreas as the only organ affected is low (7.6%), and the majority do not require treatment[4].

This case concerns a 35-year-old woman referred to our Gastroenterology Department with long-standing dyspepsia and pancreatic cysts detected by ultrasound examination. There were no other symptoms, such as abdominal pain, weight loss, visual or hearing changes, headache or urinary complaints. The past medical and family histories were not of significance. There were no abnormal findings on examination.

The patient underwent an abdominal computed tomography (CT) scan (Figure 1), which showed an enlargement of the pancreas, especially in the cephalic region, with heterogeneous density due to the presence of multiple hypodense nodules dispersed throughout the parenchyma. The majority of these lesions were small, but one larger contrast-enhancing lesion of 22 mm was present in the uncinate process. 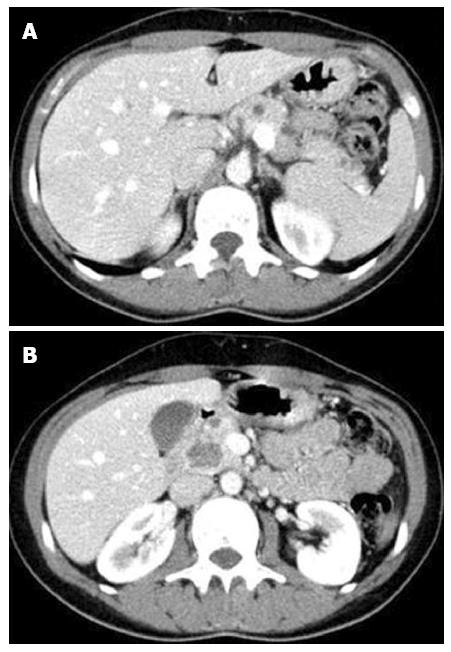 Given the findings of the CT scan, we performed an abdominal magnetic resonance imaging (MRI) (Figure 2), which revealed several cysts that had a high signal intensity on T2 weighted images. 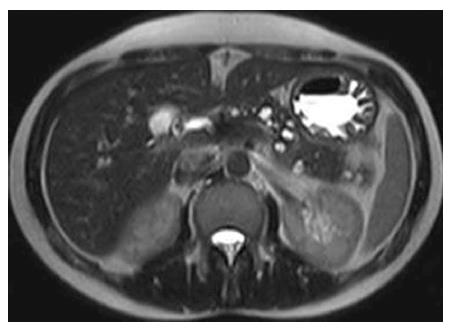 The patient underwent endosonography that confirmed the presence of multiple simple cysts throughout the entirety of the pancreas. The majority of the cysts were less than 1 cm in diameter, but two cysts were larger than 1 cm. One of the larger cysts was 16 mm in diameter and was located at the isthmus-body transition. This cyst and did not communicate with the main pancreatic duct and was aspirated. The content had a serous appearance, and cytological analysis revealed amorphous material, few erythrocytes and inflammatory cells (Figure 3). 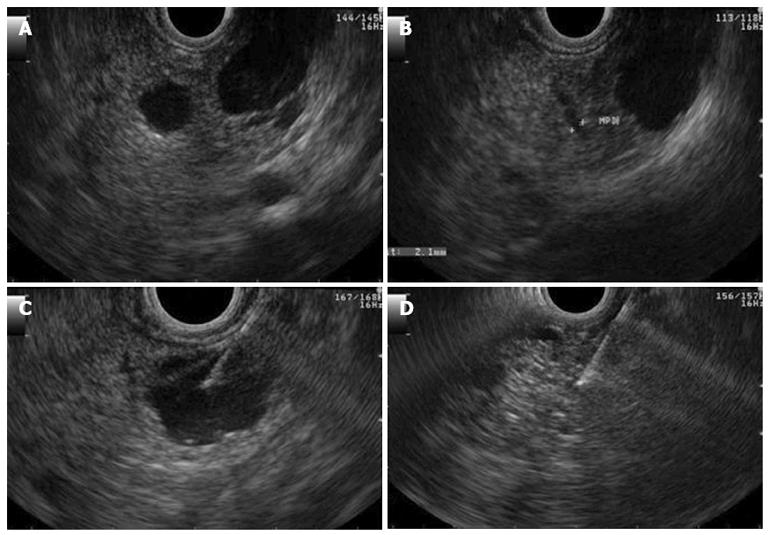 The largest cyst was 23 mm in diameter and was located in the head of the pancreas. The cyst had a honeycomb appearance characteristic of serous cystadenomas (Figure 4A). The cytology did not show evidence of cellular atypia (Figure 4B). The carninoembryonic antigen was < 0.6 ng/dL, and the amylase in the cystic content was 135 U/L.

Figure 4 The largest cyst was 23 mm in diameter and was located in the head of the pancreas. A: Endosonography. Cyst with a honeycomb appearance; B: Cytology (papanicolaou stain, × 100). Benign pancreatic cysts.

The endosonography also showed cysts in the left kidney and in the spleen (Figure 5). The findings described were compatible with simple cysts and pancreatic serous cystadenomas and provided an indication for genetic testing for VHL. The sequencing of the VHL gene revealed one pathogenic heterozygous mutation in exon 1 (c.269A > T), confirming the diagnosis of VHL disease.

The patient underwent a MRI of the brain and entire spine and no hemangioblastomas were detected. The abdominal MRI scan excluded renal carcinoma. The plasma and urinary catecholamines and the urinary vanilmandelic acid were normal, excluding pheocromocytoma. The patient was also referred for examination of the retina and ear, nose and throat, including audiometry. There were no abnormal findings, which excluded angiomas of the retina and endolymphatic sac tumors, respectively.

Her family was genetically tested, and the same mutation was found in her 7 year-old daughter.

This case is important not only due of the rarity of VHL disease but also because the only manifestation in this patient was cysts diagnosed by imaging tests. This finding emphasizes the importance of endosonography for better characterization of lesions, particularly in the absence of family history or more common manifestations.

According to criteria from Massachusetts General Hospital, if patients are found to have more than one pancreatic serous cystadenoma or have multiple pancreatic cysts and any VHL associated lesion (including pancreatic serous cystadenoma), they should be referred to a VHL specialist clinic[8]. Serous cystadenomas are rare pancreatic exocrine tumors that occur at an unusually high frequency in patients with VHL disease. They account for nearly 10% of pancreatic lesions[4]. This percentage may actually be higher due to the difficulty in distinguishing this tumor from a cluster of multiple small true cysts, although the differentiation between the two does not modify the approach to management. Hammel et al[4] found that VHL disease was discovered by chance in 6% of patients during abdominal imaging performed for unrelated reasons. Therefore, the possibility of VHL disease must be considered when pancreatic lesions are observed. Isolated pancreatic involvement can be a key factor in establishing the diagnosis of VHL when there is no family history or the concomitant existence of more conventional lesions, such as hemangioblastomas. Most of the pancreatic cysts in VHL are clinically indolent and generally do not require treatment[4,5,7]. In our case, imaging studies, such as endosonography, revealed the characteristic appearance of pancreatic serous cystadenoma and was crucial for the diagnosis of VHL disease. This diagnosis has multiple implications, including requiring an adequate annual surveillance and the possibility of transmission of this disease to descendants. Pancreatic lesions can be the first manifestation in some VHL patients. The mean age of initial detection is 37 years and precedes hemangioblastomas in the central nervous system by 5-7 years. This result emphasizes the importance of surveillance with an annual MRI of the brain and spine[7]. However, the series by Mukhopadhyay et al[5] retrospectively evaluated the pancreatic lesions in 17 VHL disease patients and found the lesions were not the presenting feature in any patient. De novo mutations of VHL are estimated to occur in approximately 20% of probands[2], which most likely occurred in our case. Unfortunately, her daughter was born with the same mutation. With a diagnosis of VHL more than 7 years earlier, our patient could have been offered prenatal screening.