Endoscopic submucosal dissection (ESD), an endoscopic procedure for the treatment of gastric epithelial neoplasia without lymph node metastases, spread rapidly, primarily in Japan, starting in the late 1990s. ESD enables en bloc resection of lesions that are difficult to resect using conventional endoscopic mucosal resection (EMR). However, in comparison to EMR, ESD requires a high level of endoscopic competence and a longer resection time. Thus, ESD is associated with a higher risk of adverse events, including intraoperative and postoperative bleeding and gastrointestinal perforation. In particular, because of a higher incidence of intraoperative bleeding with mucosal incision and submucosal dissection, which are distinctive endoscopic procedures in ESD, a strategy for endoscopic hemostasis, mainly by thermo-coagulation hemostasis using hemostatic forceps, is important. In addition, because of iatrogenic artificial ulcers that always form after ESD, endoscopic hemostasis and appropriate pharmacotherapy during the healing process are essential.

Endoscopic submucosal dissection (ESD) is a novel en-doscopic procedure developed in the 1990s[1,2], and is characterized by the use of electrosurgical knives for mucosal incision and submucosal dissection[3-15]. In ESD, the resected size and shape of tumors can be controlled, and even lesions difficult to resect by endoscopic mucosal resection (EMR) can be resected en bloc by ESD. As this technique permits en bloc resection of tumors, ESD has the advantages of enabling accurate pathological assessment and reducing the risk of local recurrence[2,16-19].

However, ESD requires a higher level of endoscopic competence than EMR. In addition, as a result of ESD being used to treat larger lesions and lesions with ulcerative findings, operation time is longer, with a higher risk of adverse events such as bleeding and gastrointestinal perforation[20-29]. The incidence of procedure-related bleeding is higher with ESD than with EMR, and to permit safe completion of ESD, control of bleeding is very important. In this article, we discuss the characteristics of ESD-related bleeding (intraoperative and postoperative bleeding) and endoscopic hemostasis. Furthermore, to prevent postoperative bleeding, we also discuss the pharmacotherapy of artificial ulcers after ESD.

Endoscopic hemostatic methods for peptic ulcers include various techniques, such as local injection of hypertonic saline-epinephrine (HSE) and ethanol, mechanical hemostasis using endoscopic hemoclips, and thermo-coagulation hemostasis[30,31]. Local injection of HSE alone is inferior to combination therapy with other hemostatic methods, but the clear superiority of any one method has not been definitively established[32]. Thermo-coagulation devices include contact thermal devices such as heater probes and hemostatic forceps, and non-contact thermal devices such as an argon plasma coagulator[33,34].

For hemostasis of ESD intraoperative bleeding, Enomoto et al[35] reported the usefulness of a method of thermo-coagulation hemostasis using monopolar hemostatic forceps in combination with an endoscope equipped with a water-jet system. Hemostatic technique in ESD, which differs from hemostasis for usual gastrointestinal bleeding, is often characterized by the need for repeated hemostasis during both mucosal incision and submucosal dissection. In addition, precise hemostatic maneuvers are required, in order not to interfere with the subsequent procedure after hemostatic treatment[36,37]. Therefore, hemostatic forceps, which enable reliable hemostasis when, with re-holding of the ruptured vessels permissible several times before coagulation, bleeding points can be accurately grasped, are useful for hemostasis in ESD-related bleeding[38,39] (Figure 1). 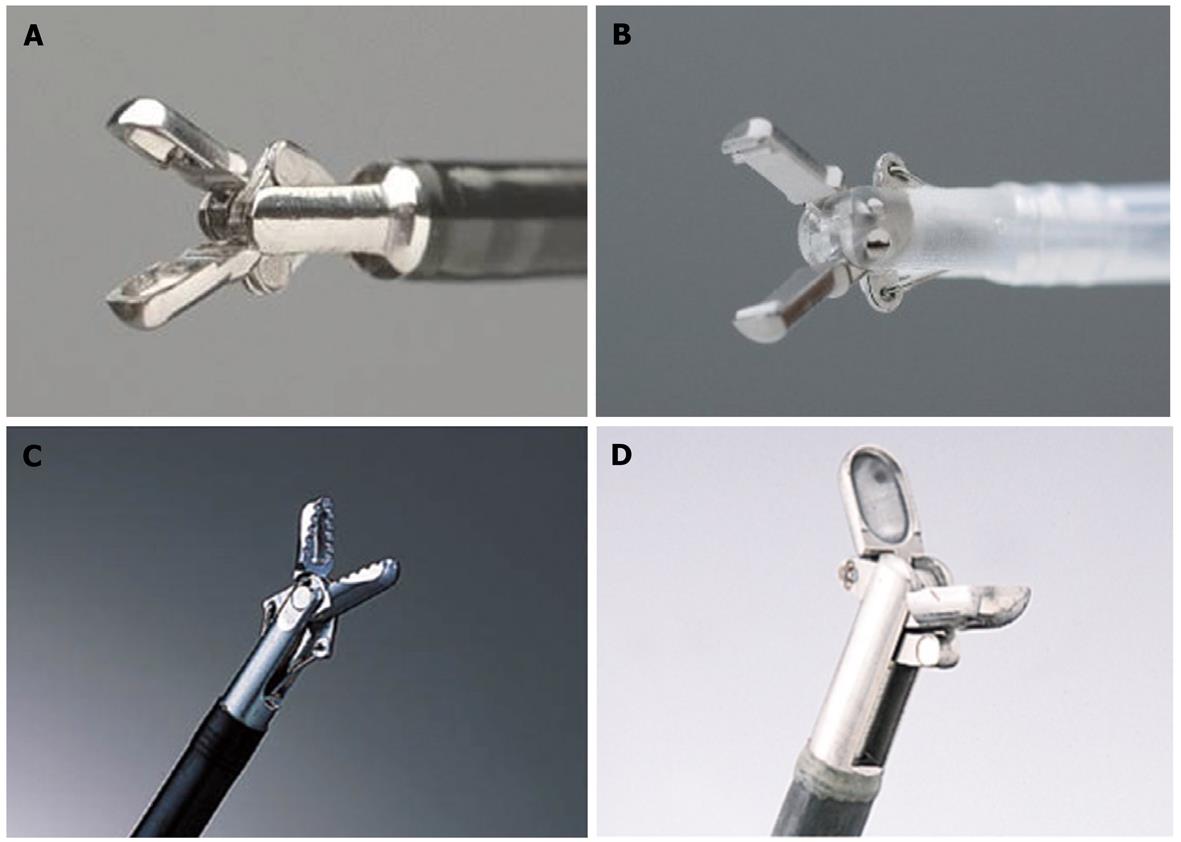 MANAGEMENT OF BLEEDING DURING AND AFTER ESD

ESD-related bleeding includes intraoperative bleeding associated with procedures such as mucosal incision and submucosal dissection, and delayed bleeding, which occurs postoperatively from exposed vessels at ulcer bases. Appropriate management of each type of bleeding is required.

Of the series of techniques in ESD, bleeding is inevitable with submucosal local injection and mucosal incision because they are blind procedures in the vascular-rich submucosal tissue. To produce higher hemostatic ability, a small amount of epinephrine to a concentration of 0.0005% is added to the submucosal cushion (glyceol, Chugai Pharmaceutical Co., Tokyo Japan). On the other hand, during submucosal dissection, bleeding can be avoided at all sites by making every effort to visually identify vessels and not perform dissection blindly. Oyama et al[45] noted that identification of vessels prior to submucosal dissection and prophylactic thermo-coagulation are most important in preventing ESD intraoperative bleeding. Toyonaga et al[13,46] stated that knowing the correct layer of the submucosa containing fewer vessels and existing fibrous tissue, is important in reducing ESD intraoperative bleeding.

When bleeding occurs during ESD, by washing out the blood with the water-jet system and using a transparent attachment hood, a clear visual field can be maintained, and bleeding points can be rapidly identified[35]. For bleeding from vessels smaller than the electrosurgical knife tip or arm, hemostasis by thermo-coagulation with the knife is usually possible. For bleeding from vessels larger than the electrosurgical knife tip or arm, or bleeding for which hemostasis with the knife is difficult, hemostatic forceps are used (Figure 2). Fujishiro et al[47] reported that hemostatic forceps for vessels smaller than 2 mm in diameter, and hot biopsy forceps for vessels larger than 2 mm in diameter, are useful. When hemostasis by thermo-coagulation cannot be achieved, hemostasis using endoscopic hemoclips is necessary, so that subsequent procedures are not hindered. 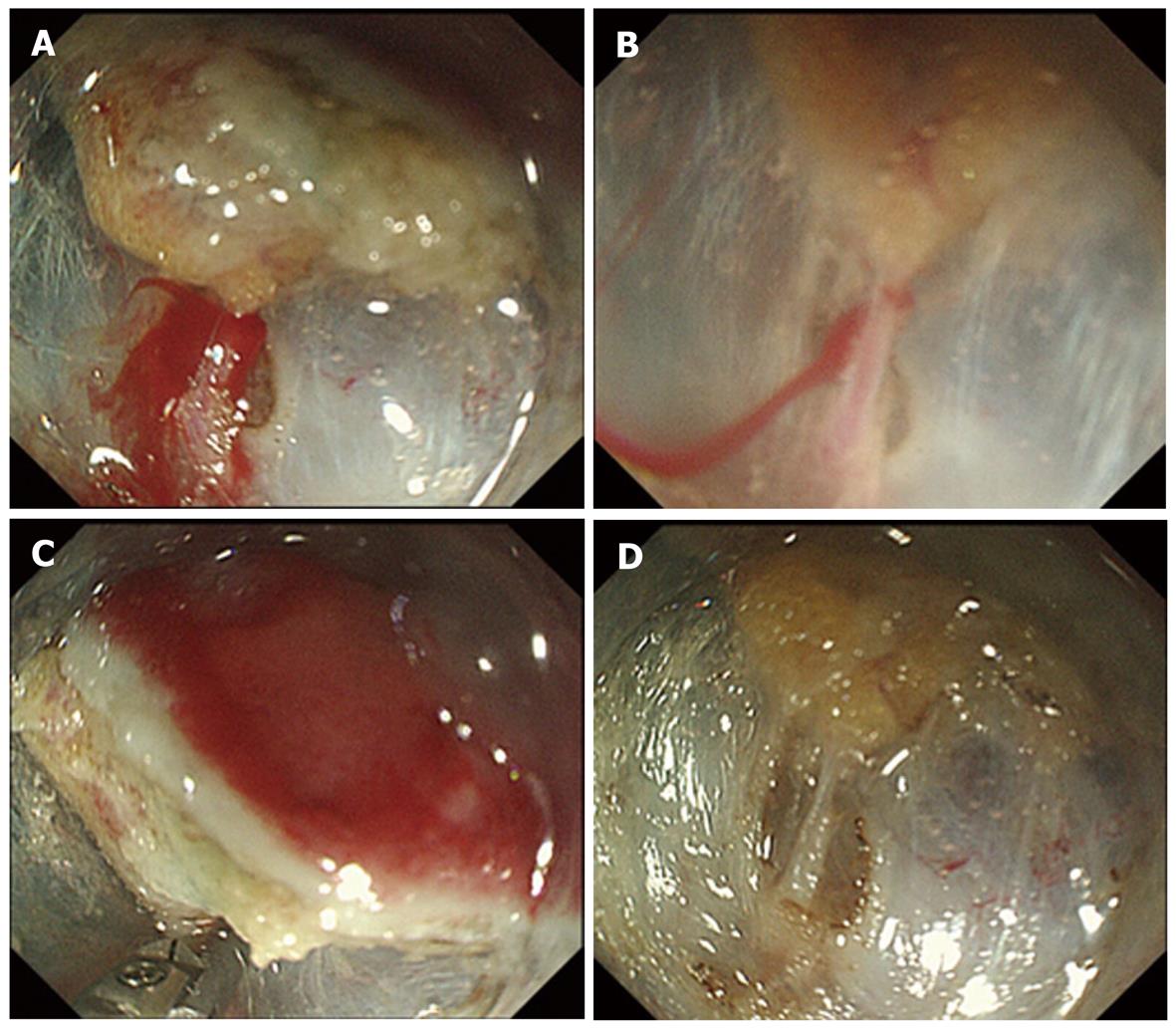 Figure 2 Hemostatic procedure for endoscopic submucosal dissectionintraoperative bleeding using hemostatic forceps. A: Pulsatile bleeding is observed during submucosal dissection; B: By filling the tip attachment with water, the bleeding point can be pinpointed and identified; C: After identifying the bleeding point, the vessel is securely grasped by hemostatic forceps, and thermo-coagulation is performed; D: Complete hemostasis is achieved, without excessive coagulation.
Hemostasis for delayed bleeding

Delayed bleeding after ESD occurs in 0%-9% of cases[6,16,18,28,48-54] (Table 1). For resected lesions located in the middle and lower third of the stomach, the incidence is higher. Bleeding occurs when vessels at ulcer bases rupture due to physical stimulation by peristalsis or due to chemical stimulation, for example, by bile reflux[48]. Delayed bleeding often occurs within 24 h postoperatively and is related to lesion location, size, and ulcerfindings[48,55]. For delayed bleeding, in almost all cases, hemostasis is achieved with urgent endoscopic hemostasis[56]. However, cases requiring vascular embolization because endoscopic hemostasis could not be achieved[57], and cases complicated by disseminated intravascular coagulation the day after delayed bleeding[58] have been reported, so caution is necessary.

Pharmacotherapy of artificial ulcers that develop after ESD lesion resection is also important to prevent delayed bleeding. However, management must take into account the differences in etiology between peptic ulcers and artificial ulcers after ESD.

Currently, proton pump inhibitors (PPIs) are the drugs of first choice for treatment of peptic ulcers, and when a PPI cannot be used, an H2-receptor antagonist (H2RA) is selected. Treatment is generally for 8 wk. A meta-analysis of ulcer healing rates reported significantly higher ulcer healing rates with PPIs than with H2RAs[67,68]. In addition, in a meta-analysis of the efficacy of preventing recurrence of bleeding gastric ulcers, no differences in rebleeding rates, surgical intervention rates, or mortality rates between the two classes of drugs were reported[69].

For artificial ulcers that develop after ESD for gastric mucosal lesions without preoperative ulcer findings, Kakushima et al[71] reported that healing occurred within 8 wk with PPI administration for 8 wk, irrespective of ulcer size or location. In addition, factors that influence artificial ulcer healing such as artificial ulcer size, location, Helicobacter pylori infection status, and extent of gastric mucosal atrophy had no effect. However, with fibrosis deeper than the submucosa of lesions prior to ESD, healing may be delayed[72,73]. According to Huang et al[74], although the recurrence rate of ESD artificial ulcers is lower than that of peptic ulcers, Helicobacterpylori infection and lesion ulcer findings are risk factors for recurrence. In contrast, Oh et al[75] reported that, because the extent of healing of artificial ulcers 4 wk after ESD is determined by the size of the ulcer initially formed, the duration of PPI treatment should be decided based on this parameter.

For artificial ulcers after EMR, Lee et al[76] compared PPIs in 1-wk and 4-wk treatment groups. They found that, after 4 wk, ulcer size, stage, subjective symptoms, and use of other mucosal-protective antiulcer drugs did not significantly differ between the groups. Niimi et al[77] reported that administration of PPI for 2-wk for artificial ulcers after ESD may be sufficient to help them heal. These results suggest that, for artificial ulcers, unlike peptic ulcers, the importance of acid secretion inhibition in the ulcer healing process may be low.

Yamaguchi et al[78] compared PPI-treatment and H2RA-treatment groups in patients with artificial ulcers after EMR. They reported no differences in the incidence of delayed bleeding or ulcer size at 30 d and 60 d postoperatively. They did state that artificial ulcers healed more easily than peptic ulcers, and they concluded that, for artificial ulcers with severe bleeding within 24 h after surgery, treatment with H2RA drugs, whose onset of inhibition of gastric acid secretion is more rapid than that with PPIs, is appropriate.

Uedo et al[79] compared PPI-treatment and H2RA-treatment groups in patients with artificial ulcers after ESD. There were no differences in the incidence of delayed bleeding or ulcer healing rates between the groups. However, the cumulative non-bleeding rate using the Kaplan-Meier method was significantly higher in the PPI group. Moreover, on multivariate analysis, PPI treatment was an independent factor in reducing the rate of delayed bleeding. Their results suggested that PPIs are more effective than H2RAs for preventing ESD delayed bleeding.

For post-EMR ulcers and post-ESD ulcers, in terms of formation by endoscopic resection, with the exception of size, the pathophysiology is the same. However, in studies to date, with regard to ulcer healing and prevention of delayed bleeding when artificial ulcers are treated with acid secretion inhibitors, there is no agreement in the results. Regarding the need for and duration of treatment with acid secretion inhibitors for artificial ulcers, there is still room for debate.

Thus, among the mucosal-protective antiulcer drugs, there are drugs that accelerate ulcer healing. This may be attributable to differences in the etiology between artificial ulcers and peptic ulcers, as previously mentioned, but further evidence must be accumulated.

With the increasing use of ESD for gastric epithelial neoplasia, management of ESD-related bleeding and artificial ulcers after lesion resection has become an important issue not only in Japan, but throughout the world. Therefore, more effective endoscopic hemostatic methods and appropriate pharmacotherapy of artificial ulcers, taking into account their etiology, are becoming increasingly important. Moreover, safer and more reliable ESD techniques must be developed.

The authors would like to express their deepest thanks to Ms. Kazu Konishi for her excellent secretarial assistance.