Primary intestinal lymphangiectasia (PIL) is a rare disorder characterized by dilated intestinal lymphatics and the development of protein-losing enteropathy. Patients with PIL develop hypoalbuminemia, hypocalcemia, lymphopenia and hypogammaglobulinemia, and present with bilateral lower limb edema, fatigue, abdominal pain and diarrhea. Endoscopy reveals diffusely elongated, circumferential and polypoid mucosae covered with whitish enlarged villi, all of which indicate intestinal lymphangiectasia. Diagnosis is confirmed by characteristic tissue pathology, which includes dilated intestinal lymphatics with diffusely swollen mucosa and enlarged villi. The prevalence of PIL has increased since the introduction of capsule endoscopy. The etiology and prevalence of PIL remain unknown. Some studies have reported that several genes and regulatory molecules for lymphangiogenesis are related to PIL. We report the case of a patient with PIL involving the entire small bowel that was confirmed by capsule endoscopy and double-balloon enteroscopy-guided tissue pathology who carried a deletion on chromosome 4q25. The relationship between this deletion on chromosome 4 and PIL remains to be investigated.

The diagnosis of PIL is based on histological analysis of surgical specimens or endoscopic biopsies that reveal lacteal juice and dilated mucosal and submucosal lymphatic vessels. Typical mucosal findings upon endoscopy include diffuse swelling and enlarged whitish villi. Esophagogastroduodenoscopy and colonoscopy can be used to visualize parts of the small bowel, duodenum and terminal ileum, but capsule endoscopy is more useful to explore the entire small bowel mucosa[5]. Double-balloon enteroscopy can localize lesions and small bowel tissue can be obtained for pathological confirmation[6].

Only a few reports describe the diagnosis of PIL using capsule endoscopy and double-balloon enteroscopy[7]. No prior cases were similar to the case described in the present study, in which a deletion was found on chromosome 4. We present clinical, radiological, endoscopic and histological findings for a patient with PIL who was diagnosed using these techniques. Genetic analysis was also performed because the patient’s protein-losing enteropathy occurred at a very young age.

An 18-year-old male was transferred from the pediatrics department for endoscopic evaluation. He had been diagnosed with protein-losing enteropathy 15 d after birth based on laboratory findings and symptoms, but no cause was identified. Recurrent abdominal pain, diarrhea, hypoalbuminemia and malnutrition led to frequent hospitalization throughout his childhood. At the age of 11 years, the patient underwent a Denver shunt operation to control chylous ascites. He adhered to a low-fat diet supplemented with medium chain triglycerides (MCT) to avoid lacteal engorgement and to prevent lymphatic rupture with ensuing protein loss.

At the age of 18 years, he presented with a 3 wk history of abdominal pain, diarrhea over 20 times a day, general weakness and poor oral intake. He had short stature due to malnutrition. The physical examination showed edema in his ankles and legs. Total protein and albumin were low (3.2 and 1.8 g/dL). Sodium and potassium were within normal ranges (141 and 4.3 mmol/L), whereas ionized calcium was lower than normal (3.90 mg/dL). Urinalysis did not show proteinuria. The indicator levels of thyroid function, T3 and free T4, were low (76.31 and 0.66 ng/dL). His pituitary function and mental capacity were normal. 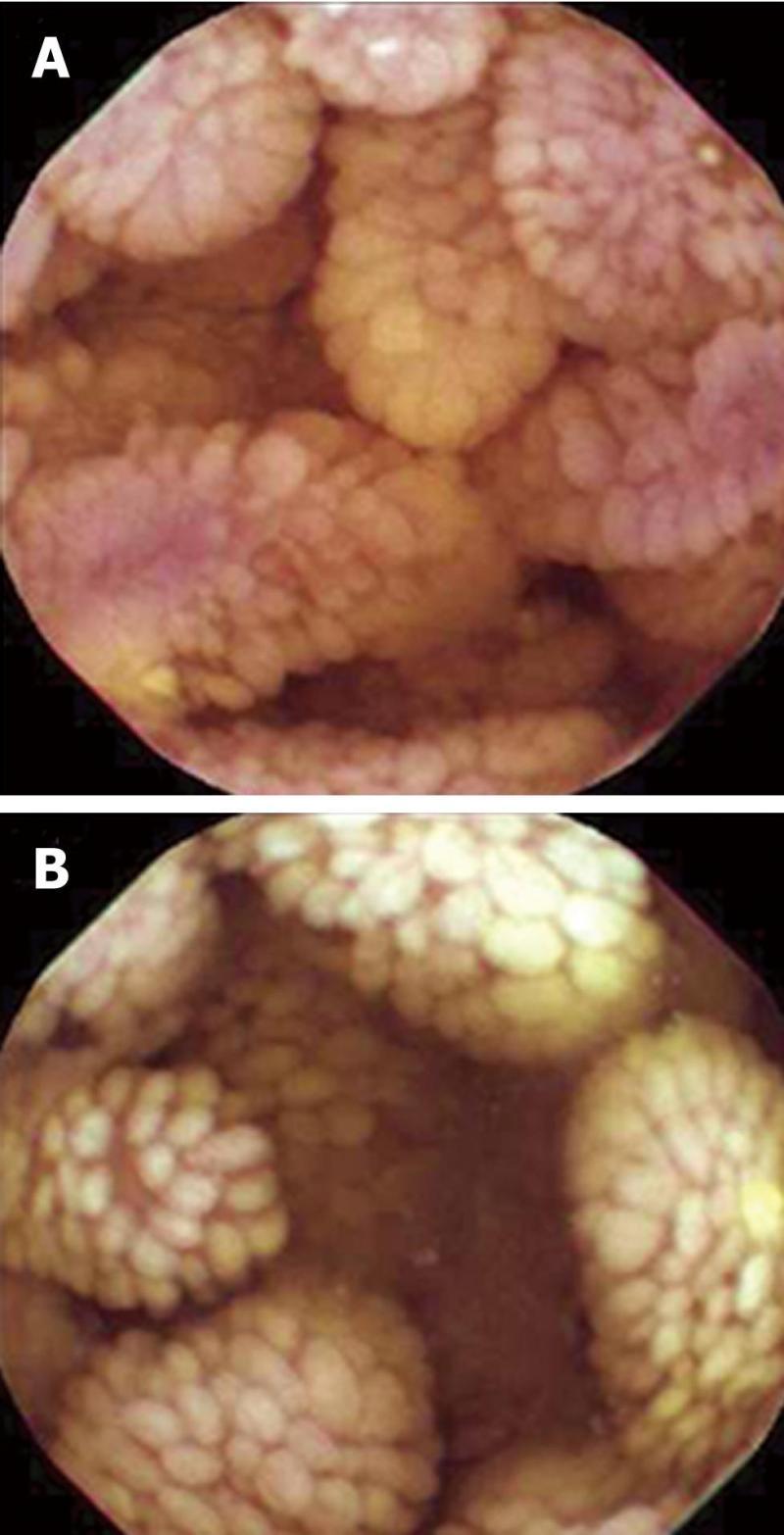 Figure 2 Capsule endoscopic findings in the duodenum (A), jejunum (B) and ileum (C). 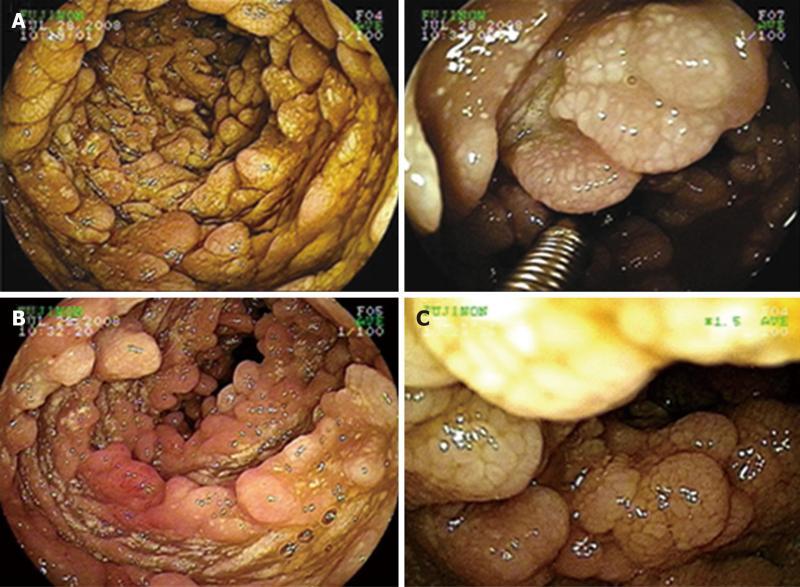 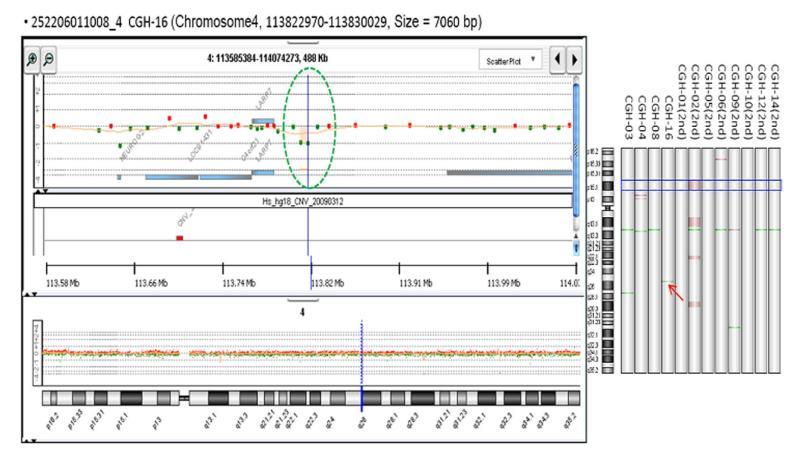 Figure 5 The deletion on chromosome 4q25.

PIL is a rare congenital disorder caused by abnormal lymphatic function. Intestinal lymphangiectasis can also occur as a secondary effect of tuberculosis, sarcoidosis, Crohn’s disease, Budd-Chiari syndrome, lymphoma, congestive heart failure, constrictive pericarditis, systemic lupus erythematosus and retroperitoneal fibrosis[8]. A rare, previous case of intestinal lymphangiectasia caused by multiple myeloma involved the mesenteric lymph nodes[9]. PIL was suggested because there was no evidence of pancreatic disease, systemic lupus erythematosus, Menetrier’s disease, other intestinal disorders, other disorders of intestinal lymphatics or intestinal lymphoma[10]. Ruptured lymphatic vessels resulting from inflammatory diseases of the small intestine or malrotation were reported to be mechanisms of secondary intestinal lymphangiectasis. Lymph leakage into the bowel lumen, which leads to hypoalbuminemia and lymphopenia, is a basic mechanism of intestinal lymphangiectasis[11]. In PIL, the etiology of lymphatic dysfunction is unknown. Some studies point to genetic factors in hereditary lymphatic disorders, while other data suggest that regulatory signals involved in lymphangiogenesis, such as vascular endothelial growth factor receptor 3 and LYVE-1, are associated with intestinal lymphagiectasia[12]. Vascular endothelial growth factors-C and -D may also stimulate lymphangiogenesis[13]. Mutations in the FOXC2 (MFH-1) gene or deletion of the pik3r1 gene may result in lymphangiectasia, arrested lymphatic sprouting and maturation defects[14,15]. Defects in chromosome 4 may be related to Rieger syndrome, head and neck squamous cell carcinoma and postoperative atrial fibrillation[16-18]. However, the present case is unique because a deletion was found on chromosome 4. We hypothesized that the deletion of 4q25 and PIL were related because a recent study identified a chromosome 4q25 variant that was associated with diseases such as atrial fibrillation[18]. However, the relationship between deletions on chromosome 4q25 and lymphatic disorders such as PIL remains to be investigated. Mutations related to PIL have never previously been reported.

Diagnoses of PIL are typically confirmed by the presence of intestinal lymphangiectasia based on endoscopic findings and the corresponding histology in intestinal biopsy specimens[11]. Intestinal tissue is acquired through double balloon enteroscopy if a suspicious lesion is observed in the small intestine. Abdominal ultrasonography and CT show diffuse wall thickening and mesenteric edema[19]. Typical mucosal lesions can be identified using endoscopy. Donzelli et al[20] described two types of lymphangiectatic plaques on the surface of the duodenal mucosa that were detected via duodenoscopy. One type had a diameter of less than 1 mm, while the other exceeded 3 mm in diameter. Asakura et al[21] reported three cardinal endoscopic findings in protein-losing enteropathy: scattered white spots, white villi and chyle-like substances covering the mucosa in the jejunum. In cases of sustained protein-losing enteropathy, capsule endoscopy may assist diagnosis. Chamouard et al[22] described a case of PIL that was detected using Given M2A video capsule endoscopy. Fang et al[10] reported the case of a female patient who was diagnosed with PIL by M2A capsule endoscopy and was confirmed by pathological examination. In our case, we were able to examine the patient’s small bowel completely and detect these typical findings via capsule endoscopy following accurate pathological diagnosis according to double balloon enteroscopy. However, the roles of capsule endoscopy and double balloon enteroscopy as prognosticators have not been reported.

Outcomes of PIL may be predicted according to whether complications, such as infection, malignancy (lymphoma) and serous effusion (pleural or pericardic), occur. There is no gold standard treatment for PIL. A low-fat diet with supplemental MCT forms the cornerstone of management in PIL[23]. MCT are directly absorbed into the portal venous system, which prevents lacteal engorgement[24]. Dietary intervention is more effective in children than in adults, therefore early diagnosis of intestinal lymphangiectasia and consistent attention to diet are very important for early nutrition and growth[25]. Small bowel resection may be helpful to treat localized disease[26]. Antiplasmin, octreotide and corticosteroids are treatment options, but their efficacies are variable and insufficient[11]. In our patient, the course of disease apparently stabilized after treatment; however, he has reported episodes of protein-losing enteropathy during occasional periods of dietary therapy cessation. Antiplasmin, octreotide and corticosteroids may be future options if his symptoms progress despite dietary therapy.

We report the case of a patient with PIL involving the entire small bowel, which we confirmed using capsule endoscopy and double-balloon enteroscopy-guided tissue pathology. Capsule endoscopy showed diffusely swollen mucosae and enlarged whitish villi, and genetic analysis revealed a deletion on chromosome 4. However, we did not identify the specific gene associated with chromosome 4q25 that may be related to PIL. The LARP7 gene, which is located near chromosome 4q25, may be involved. The possible relationship between the deletion at chromosome 4q25 and PIL warrants further study.