Patients with Crohn’s disease may develop an abdominal or pelvic abscess during the course of their illness. This process results from transmural inflammation and penetration of the bowel wall, which in turn leads to a contained perforation and subsequent abscess formation. Management of patients with Crohn’s related intra-abdominal and pelvic abscesses is challenging and requires the expertise of multiple specialties working in concert. Treatment usually consists of percutaneous abscess drainage (PAD) under guidance of computed tomography in addition to antibiotics. PAD allows for drainage of infection and avoidance of a two-stage surgical procedure in most cases. It is unclear if PAD can be considered a definitive treatment without the need for future surgery. The use of immune suppressive agents such as anti-tumor necrosis factor-α in this setting may be hazardous and their appropriate use is controversial. This article discusses the management of spontaneous abdominal and pelvic abscesses in Crohn’s disease.

Abdominal and pelvic abscesses in Crohn’s disease occur spontaneously or as a post-operative complication. This article focuses on the former. Approximately 10% to 30% of patients with Crohn’s disease will spontaneously develop an abdominal or pelvic abscess during the course of their illness[1-3]. These abscesses occur from transmural inflammation and microperforation of diseased bowel[4,5]. Fistulas arising from the diseased bowel are often associated with the abscess cavity[6]. In the great majority of cases, the terminal ileum or ileo-cecal region are the foci of Crohn’s related activity[1,4,7]. Most commonly, abscesses occur in the abdominal wall, rectus sheath, iliopsoas muscle, gluteus muscle, presacral and subphrenic spaces[1,8]. The majority of abscesses occur on the right side near the diseased bowel and almost always at the site of a prior anastomosis[1].

Routine history and physical examination will identify most patients suspected of having an abdominal or pelvic abscess[9]. Abdominal pain, fever and a palpable mass are the most common findings[7]. A palpable mass is present in about 1/3 of patients. Rebound tenderness occurs 30% of the time[10]. Clinicians should be aware that elderly or immune suppressed patients sometimes manifest fewer signs and symptoms[9]. Abscesses involving the psoas muscle can present insidiously as vague flank pain or a new onset limp[11]. Patients with signs and symptoms of abscess should undergo spiral computed tomography (CT) with intravenous and oral contrast (Figure 1). If available, CT enterography with a neutral contrast agent is preferable because it is more likely to demonstrate an associated fistula and also gives valuable information regarding the extent and degree of bowel wall inflammation[12]. 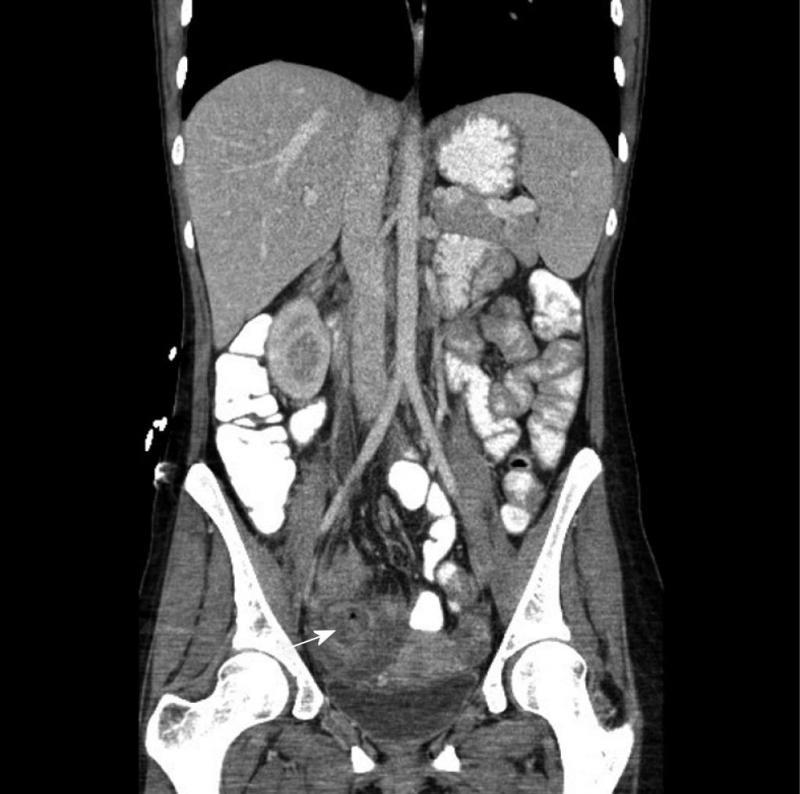 Figure 1 A 33-year-old female patient with a 3 cm pelvic abscess due to Crohn’s disease. The computed tomography demonstrates an abscess cavity with a small air bubble within it (arrow) prior to drainage, which was accomplished by placing a drainage catheter via the transgluteal route.

The radiological definition of an abscess varies in the literature. An inflammatory mass with ill-defined borders is often referred to as a phlegmon[13]. On the other hand, an abscess has a well-defined border[14]. Most often it is defined as a ring enhancing fluid collection, with or without air[15]. Some authors include the aspiration of pus as a diagnostic inclusion criterion[10].

The next step in management depends on the patient’s clinical status. It should be stressed that most abscesses represent contained perforations: free perforations are rare in Crohn’s disease[6]. If the patient does not have peritonitis and is hemodynamically stable, a drainage procedure can be delayed for up to 24 h if appropriate antibiotics are given[9]. Acute peritonitis is best treated with surgery rather than percutaneous abscess drainage (PAD), even if imaging demonstrates a drainable collection[9].

PAD has replaced open laparotomy as the initial choice for draining these abscess collections[8]. The benefits of drainage are derived from delaying surgery as long as possible. This will allow the inflammation associated with the septic process to resolve, thereby allowing for a limited resection and a possible one-stage operation at a later date[16]. Delaying surgery also allows time for optimizing nutritional status and reducing or stopping corticosteroids[17,18].

If the abscess is drainable by PAD, the next step is to aspirate the collection in order to demonstrate the nature of the fluid[19]. As much pus as possible should be aspirated[20]. The aspirate should be sent for routine culture and sensitivity. Most abscesses are polymicrobial[21]. Enteric gram-negative bacilli, gram-positive cocci and anaerobes predominate, although a minority of pathogens are identified by routine laboratories[21]. The major pathogens in community-acquired intra-abdominal infections are coliforms (especially Escherichia coli) and anaerobes (especially Bacteroides fragilis)[9]. Chosen antibiotics should cover these organisms. Also, in choosing the correct antibiotic, it is helpful to know the organisms’ resistance pattern in the community and local hospital setting[9,21]. Patients from underdeveloped countries or those who are immune suppressed might have tuberculosis or other opportunistic infections as the causal organism[22]. Abscesses less than 3 cm do not require drainage. They can be managed by antibiotics alone or in combination with simple aspiration[8].

The drainage approach depends on the abscess’ location. A transgluteal approach is common for pelvic abscesses and is associated with a low complication rate[6,8]. Transabdominal and perineal approaches are also commonly used[19]. A drainage catheter should be left in place and the quality and quantity of its output should be measured daily. The catheter’s diameter should be chosen according to the viscosity of the aspirated material. A large enough diameter is essential to assure success of drainage[23]. The catheter should be flushed with 10-20 mL of saline every 6 h to assure patency[8].

Clinical improvement is usually seen within 48 h of successful drainage[8,19]. If fever persists, a repeat CT is indicated to assure that the catheter is properly positioned. The catheter can be removed when drainage decreases to 10-20 mL per day[3,24]. The mean time for drainage is approximately 7-10 d (range 3 to 23 d)[8,20]. Antibiotics are generally not indicated for more than 7 d or until fever resolves[9].

If an abscess is not accessible by CT, endoscopic ultrasound (EUS) can be employed to drain the cavity by the transrectal or transvaginal approach[19,25,26]. For EUS, the abscess must be within 2 cm of the rectum or left colon[26]. Alternatively if all of these methods fail, a laparoscopic drainage can be performed with minimal invasiveness[27].

The definition of success varies across studies. Generally, success is defined as resolution of symptoms with collapse of the abscess cavity and avoidance of early surgery (within 30-60 d)[3,5,10,20,28,29]. With this definition in mind, success rates vary from 50%-95%[3,5,8,19,23]. Multiple or multi-locular abscesses and those associated with a fistula are more often prone to failure[3,8,29]. Also, spontaneous abscesses have a poorer prognosis than post-operative ones. Golfieri et al[8] found that spontaneous abscesses were associated with a lower success rate than post-operative abscesses (77% vs for 84.3% respectively), although this was not statistically different. Failure of PAD is usually heralded by continued drainage of > 20 mL/d (with continued thick viscosity). If this happens, a sinogram should be performed and will usually demonstrate a fistula to bowel, indicating a need for prompt surgical repair[8].

The timing of surgery after successful PAD is controversial. Poritz et al[15] successfully performed a one-stage surgery in 84% of 19 patients after only 7 d of drainage. da Luz Moreira et al[5] performed surgery on 48 patients at a median of 43 d (range 8 to 220 d) after PAD. Twenty-three percent of these patients required a stoma; therefore, successful PAD does not guarantee a one-stage operation. Others wait 6-8 wk to perform elective surgery after drainage[30]. The timing of surgery is also influenced by other factors such as nutritional status and prior steroid use[6]. There is a high risk of surgical dehiscence if steroids are used for more than 3 mo[4].

Whether or not all patients require surgery after successful PAD is unknown. One argument favoring elective surgery is that diseased bowel left intact is a focus for future abscess recurrence, perhaps requiring emergency surgery at a later date. In one study, only 23% of patients avoided a definitive operation after a mean follow-up of 7.2 years[3]. In another study, 6 of 7 patients that did not have elective surgery had a severe recurrence within 3 years[1]. On the other hand, some studies have shown the majority of patients do well after PAD without definitive surgery and that the recurrence rate is acceptably low[10]. Golfieri et al[8] found that only 12.6% of 70 patients developed a recurrent abscess after a mean follow-up of 39 mo and that only 5/11 of these patients required urgent surgery. As mentioned, patients with fistula are likely to recur and should undergo surgery[18].

THE USE OF BIOLOGICS AFTER PERCUTANEOUS ABSCESS DRAINAGE

Anti-tumor necrosis factor (TNF)-α drugs such as adalimumab are approved for use in patients with inflammatory Crohn’s and fistulizing disease and are contraindicated in patients with abscess or active infection[31]. Their safety after PAD drainage has not been formally evaluated and is therefore not known[32].

Anti-TNF-α drugs may potentially benefit patients after PAD by decreasing inflammation and closing fistulas, thereby limiting surgery or avoiding it altogether. Their use is probably safe if all infection has been successfully drained. However, undrained collections (which may be undetectable) represent a problem. Eighteen patients underwent a planned one-stage surgical procedure after successful PAD in one study: in 2 of these 18 patients, residual pus was found at the time of surgery[15]. Therefore, they should be used with extreme caution in this setting and only after a thorough discussion with the patient of the potential risks and benefits. Also, there is a concern that they may increase post-operative complications; however, this aspect is controversial[17,18].

Spontaneous abdominal and pelvic abscess occur in 10%-30% of Crohn’s patients over the lifetime of their disease. Successful management depends on a highly skilled team of surgeons, gastroenterologists and interventional radiologists who have experience with this complication. PAD (in conjunction with IV antibiotics) should be done whenever possible until the infection has subsided. Fistulas and multiple abscesses predict a poor response to PAD. After successful PAD, patients should be offered the option of elective surgery, which can be done soon after successful drainage. If patients are poorly nourished or have been on steroids for more than 3 mo, it is best to wait in order to optimize their medical condition. Anti-TNF-α drugs can be used after successfully draining all infected fluid collections. Their safety and efficacy in this setting is not currently known and should be used with caution.