Pancreatic pseudocysts can be managed conservatively in the majority of patients but some of them will require surgical, endoscopic or percutaneous drainage. Endoscopic drainage represents an efficient modality of drainage with a high resolution rate and lower morbidity and mortality than the surgical or percutaneous approach. In this article we review the endoscopic pseudocyst drainage procedure with special emphasis on technical details.

In this article we describe the technical steps we follow to perform EUS-guided pseudocyst drainage. Since EUS controlled drainage is only necessary in the transmural approach, the transpapillary technique is not described here.

Basically, there are two possible techniques for performing EUS-guided drainage: the EUS-Endoscopy technique, where the EUS is used only to perform the initial puncture of the pseudocyst, and the EUS-single step technique, where the whole procedure relies on the EUS exploration.

As has been mentioned before, this technique requires the use of endosonography, endoscopy and fluoroscopy. We always do the exploration with the patient under general anaesthesia and in a left lateral decubitus position using antibiotic prophylaxis with ciprofloxacin or levofloxacin. This antibiotic treatment is maintained for 7 d after the procedure. We like to start the exploration with the radial echoendoscope, in order to evaluate the diameter and characteristics of the pseudocyst. These include distance to the gut wall, presence of solid debris inside the cyst, portal hypertension vasculature, relationship of the cyst to the splenic artery, communication of the cyst with the pancreatic duct and presence of biliary disease such as common bile duct stones (Figure 1A and B).

Figure 1 Images of a 14 cm diameter pseudocyst in a patient with an alcoholic chronic pancreatitis. A: CT; B: Endoscopic ultrasonography (EUS) with doppler, the pseudocyst can be seen in close contact with the gastric wall without intervening vessels.

Taking into account the radial EUS findings and previous radiological results, the best approach to drain the pseudocyst is decided. When the best choice is to perform a transmural drainage, we then introduce the linear array echoendoscope as far as the stomach or duodenum, and search for an adequate point to puncture. This point must not have intervening vessels and the distance between the gut lumen and the pseudocyst must be less than one centimetre.

Once the best point to puncture is identified, a 19 G needle (Echo-Tip, Wilson-Cook medical, Inc., Winston-Salem, North Carolina, USA) is introduced through the working channel of the endoscope. Afterwards, we proceed to puncture with the endoscope in a fixed and straightened position (Figure 2A and B). After removing the needle stylet, we aspirate at least 30 cc of pseudocyst contents and send specimen for culture and analysis for determination of amylase and CEA levels. 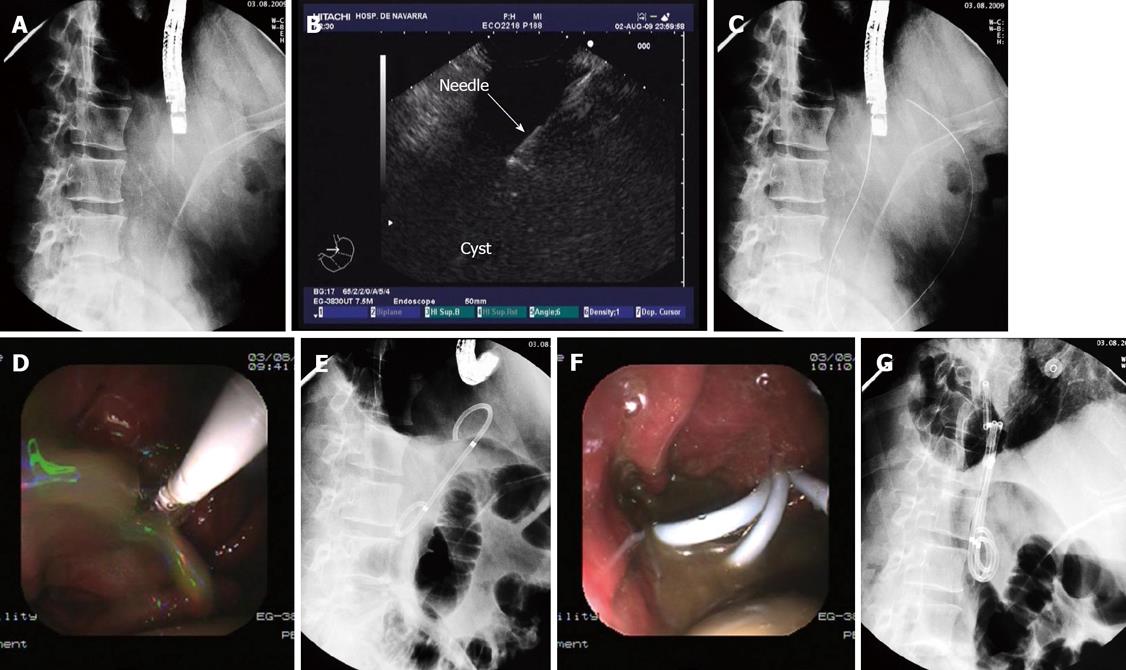 Afterwards, we introduce a guide wire (Jagwire, Boston Scientific Corp, Natick, MA, USA) through the needle and check with the ultrasonography and the fluoroscopy view that the wire is correctly placed inside the cyst (Figure 2C). Without losing the endoscope position we remove the needle, leaving the guide wire in place, and then introduce a biliary balloon dilatation catheter (Hurricane Rx, Boston Scientific Corp, Cork, Ireland) over the wire.

Once the dilatation catheter is inserted through the fistula, we change to the endoscopy view and proceed to dilate up to 8 or 10 mm, under endoscopic control. After one minute of dilatation, the balloon is deflated and a large amount of pseudocyst contents usually drains to the stomach and must be aspirated (Figure 2D). Once there is a clear vision of the fistula, a double pigtail stent (Solus, Cook Medical, Limerick, Ireland) is inserted over the wire and placed through the fistula, connecting the pseudocyst and the gastric lumen (Figure 2E and F).

In order to insert more stents, we have to recannulate the fistula and again insert the guide wire into the cyst to be able to introduce a second stent or a nasocystic catheter. We repeat this manoeuvre as many times as the number of stents we want to place.

Normally we place no less than 3 stents, 10F diameter and 5-7 cm long (Figure 2G). When we decide to insert a nasocystic catheter because of the presence of solid debris inside the cyst, we use a 6F catheter (Nasal Biliary Drainage Set, Cook Medical, Limerick, Ireland) and perform nasocystic lavage with continuous perfusion of 1000-1500 cc of saline over 3-5 d (Figures 3 and 4A). 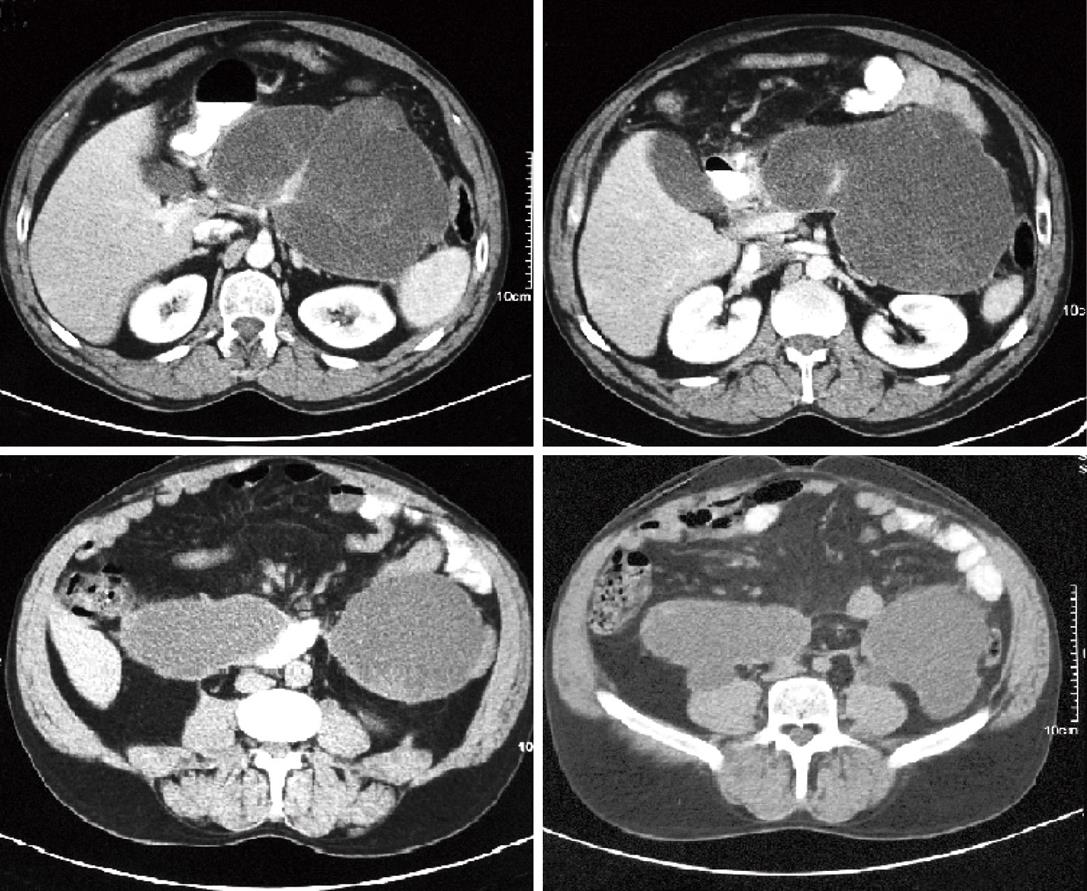 Figure 3 In this case, a large cyst of 18 cm in diameter with a horseshoe morphology going down bilaterally as far as the pelvic cavity can be seen on the CT scan.

Figure 4 The same patient as previus images. A: The patient was treated with placement of three transmural double pigtail stents, and a thinner nasocystic drainage catheter because of dense cyst contents; B: The pseudocyst has disappeared after 4 wk with the stents. One of the stents has migrated and the other two can be seen communicating between the gastric lumen and the collapsed cyst cavity. Both stents were retrieved uneventfully and the patient remains asymptomatic 6 mo later.

The patient resumes oral feeding several hours after the exploration and is discharged 24 h later if there are no procedure-related complications. Between 4 and 6 wk after the drainage procedure we perform a CT scan and remove the stents if the resolution of the pseudocyst is confirmed (Figure 4B).

For performance of this technique there is a commercially available device for use with large-channel echoendoscopes without the need for any exchanges, using the Needle-Wire Oasis System. This is an all-in-one stent introduction system, containing a 0.035-inch needle-wire suitable for cutting current, 5.5F guiding catheter and a pushing catheter with a back-loaded straight stent (8.5 or 10F, 5 cm long).

This procedure can be performed with the patient under conscious sedation by using standard monitoring in the left lateral position. Intravenous broad-spectrum antibiotics must be used before and after the procedure. The optimal location for carrying out the procedure is the fluoroscopy suite, since in some cases the radiologic view can be helpful either for insertion of the stent at a better angle or for completing the drainage with cyst irrigation and/or additional stent placement.

First thing to do is locate the cyst with the linear array echoendoscope, looking for an optimal contact with the gastric or duodenal wall. Doppler assessment is included to eliminate interposition of large vessels. The needle-wire is then introduced into the intestinal wall and the cyst wall is penetrated under continuous pressure and cutting current. Once inside the cyst, the internal rigid part of the needle-wire is removed and it becomes a soft wire that can be easily inserted into the cyst followed by the dilator catheter and finally the straight plastic endoprosthesis under endoscopic and ultrasound monitoring.

Transmural endoscopic pseudocyst drainage was initially described as a blind technique, without the aid of EUS[4]. Although some authors still support this classic endoscopic approach[5], EUS guided drainage offers important advantages. It improves the safety of the procedure as the risk of bleeding is reduced by avoiding intervening vessels identified with the color doppler It also increases the number of patients amenable for endoscopic drainage since non-bulging cysts are also amenable to drainage. This has been proved in a prospective study performed by Varadarajalu et al[6], in which, the EUS-guided approach was successful in all patients with a rate of pseudocyst resolution of 95%, while the endoscopic blind approach was successful in only 57% of patients with a similar rate of pseudocyst resolution (90%). Noticeably, in this study, 43% of patients in whom the blind approach was attempted required an EUS-guided drainage because of failure of the blind procedure[6]. Furthermore, the only clinically meaningful episode of bleeding occurred with the blind endoscopic approach. Taking these results into account, and in agreement with other authors[4,7], we think that the EUS guided procedure allows more accurate drainage of cysts, with a lower risk of complication.

In addition to its safety and therapeutic success rate, EUS also allows a diagnostic evaluation of the pancreatic cystic lesions. Thus, based on the EUS findings, the management plan is changed in 5%-9% of patients since EUS identifies other cystic lesions misdiagnosed as pseudocysts[6-8].

From the technical point of view, the EUS-guided approach has two crucial steps. The first is the identification of an optimal point to puncture without intervening vessels and with a short distance between the cyst and the gut wall. Once this point is identified, the endoscope should be straightened as much as possible in a stable position. The second critical step is that once the puncture has been performed and the guide wire is curled inside the cyst cavity, the wall dilator must be introduced without losing the endoscope position and under ultrasonographic view. Once the dilator has been inserted through the parietal fistula, the ultrasonographic view is no longer needed, and the dilation and stent insertion can be made under endoscopic view. In our experience, it is normally possible to recannulate the fistula with the echoendoscope in order to insert more stents, although it is sometimes necessary to exchange the echoendoscope for a duodenoscope.

The single step technique was first described in 1998 by Vilmann et al[9] and Giovannini et al[10]. In a prospective study, Kruger and co-workers[11] evaluated the one-step device for drainage of pancreatic pseudocysts and abscesses (Giovannini Needle Wire Oasis, Cook Endoscopy, Limerick, Ireland). Endoscopic stent placement was successful in 33 of 35 patients (94%), whereas repeated needle passages were unsuccessful in 2 cases. No procedure-related complications, such as bleeding, perforation, or pneumoperitoneum, were observed. All subsequent complications, such as ineffective drainage (9%), stent occlusion (12%), or cyst infection (12%), were managed endoscopically. The overall resolution rate was 88%, with a recurrence rate of 12%, during a mean follow-up period of 24 mo. The author concluded that the one-step EUS-guided technique with a needle-wire device provides safe transmural access and allows effective subsequent endoscopic management of pancreatic pseudocysts and abscesses.

Although the EUS-Endoscopy technique requires both fluoroscopic and endoscopic viewing, we prefer this technique to the EUS single step procedure. It allows the operator to insert more stents trough just one fistula, to insert pigtail stents, to insert stents of a greater diameter, or even to perform more aggressive treatments such as endoscopic necrosectomy whenever there is solid debris within the cyst cavity. Furthermore, new technical developments allow the operator to insert several guide wires in just one step making the insertion of several stents easier[12]. Cahen et al[3] reported that the majority of major complications related to the endoscopic drainage of pseudocysts might have been prevented by using pigtail instead of straight stents, further supporting our preference.

There are still some questions unanswered regarding the endoscopic treatment of pancreatic pseudocysts: How many stents must be placed? What is the optimal duration of stent placement? Regarding the first question, we always try to insert a minimum of three 10F diameter/5-7 cm long pigtail stents. Whenever the pseudocyst content is dense or there is a suspicious of pseudocyst infection, we also insert a naso-biliary catheter. Regarding the second question, there are some data in the literature which suggest a lower pseudocyst recurrence rate in selected patients when the stents are not retrieved[13], although more data are needed draw a firm conclusion.

In summary, EUS-guided pancreatic pseudocyst drainage improves the safety of pancreatic pseudocysts endoscopic drainage and increases the number of patients suitable for this procedure by avoiding percutaneous and surgical drainage which are associated with higher morbidity and mortality. Therefore the EUS-guided procedure seems to be the best and safest technique for transmural endoscopic pseudocyst drainage, and it should be considered the first choice option.