Deliberate single foreign body ingestion is a scenario that many gastroenterologists commonly see in psychiatric units and prisons. However, multiple foreign body ingestions, especially located in the duodenum, provide the endoscopist with unique challenges for management and treatment. Although most foreign objects pass spontaneously, one should have a low threshold of intervention for multiple objects, especially those that are wide, sharp and at risk of perforation. Diagnosis is typically made when there is a history of ingestion coupled with corresponding radiographic verification. The symptoms tend to be non-specific although some patients are able to delineate where the discomfort level is, correlating with the site of impaction. Most foreign bodies pass spontaneously; however when multiple sharp objects are ingested, the gastroenterologist should perform endoscopic procedures to minimize the risks of bowel perforation. We describe here a successful case of multiple ingested foreign bodies retrieved across the C-loop of the duodenum and the pharynges-esophageal curve via endoscopy and review the literature of multiple foreign body ingestion.

Foreign body ingestions are a common feature of many patients who are young, alcoholic or have psychiatric conditions and it is a common scenario many primary care physicians or gastroenterologists see. The dilemma is whether to allow the foreign body to pass spontaneously or to remove it either endoscopically or surgically. We report a case of a schizophrenic prisoner with a history of bowel resection due to past foreign body ingestions who came to the emergency room after swallowing multiple spoons and a ballpoint pen. These were successfully retrieved endoscopically. In this report we review the literature on multiple foreign body ingestions located in the duodenum and possible interventions for endoscopic management.

A 62-year-old male prisoner with schizophrenia was brought to the emergency room with severe abdominal pain and recurrent vomiting. He has a previous history of several instances of uneventful foreign body ingestions. However, three years ago one such episode resulted in bowel perforations that eventually required colectomy and end ileostomy. Currently he reported ingestion of multiple plastic spoons and a ballpoint pen three days previously. He had dry oral mucosa, normal vital signs and a mildly distended abdomen with no signs of obstruction or peritonitis. Serial abdominal radiographs showed linear outlines of the ingested foreign bodies in the subhepatic region that have not changed in position (Figure 1). These were presumed to be in the second and third parts of duodenum. He had hypokalemia (2.9 mEq/dL) that was corrected with intravenous fluids and potassium supplementation. An upper endoscopy was performed under monitored anesthesia care. Multiple plastic spoons and a ballpoint pen were impacted in the distal C-loop of duodenum. All the spoons were oriented with their handles directed proximally. Using a polypectomy snare to grasp the distal handle of the most accessible spoon, it was gently disimpacted and brought into the stomach. There the snare was reoriented to align the spoon vertically grasping the distal handle about 1 cm from the tip. Then it was gradually brought out across the GE junction up to the pharyngo-esophageal curve where maneuvering the rigid, non-yielding foreign body was difficult. To accomplish the maneuver, the foreign body was held with the snare as far up in the hypopharynx as possible by the endoscopist while the anesthetist introduced grasping forceps through the mouth aided by a direct laryngoscope. The tip of the spoon was grasped with the forceps and gently maneuvered across the hypopharynx without trauma. Four spoons and a ballpoint pen were successfully retrieved by this method, one after the other (Figure 2). Post-procedure check endoscopy showed no significant mucosal trauma or bleeding and a repeat abdominal x-ray confirmed that all the foreign bodies were removed. The patient was counseled against foreign body ingestion and care was transferred to the psychiatry service. 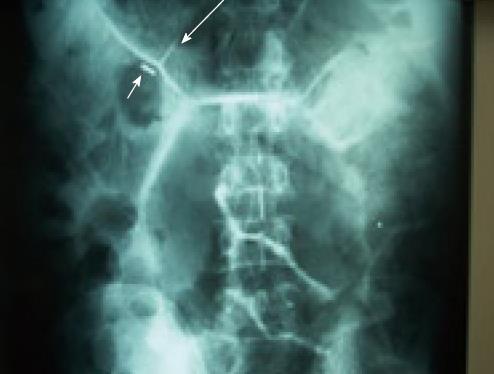 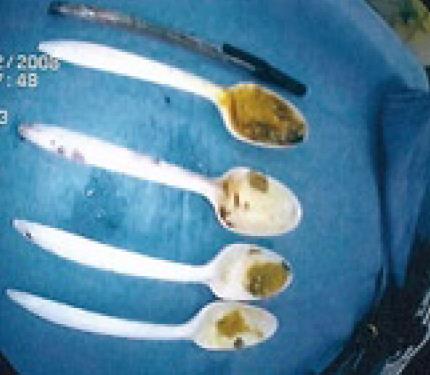 Figure 2 Successful extraction of all the duodenal foreign bodies.
DISCUSSION

In adults, most foreign body ingestion occurs in certain populations: the elderly, mentally disabled, alcoholics, prisoners and psychiatric patients[1-3]. Most foreign bodies will pass spontaneously through the gastrointestinal tract without any complications[1]; in fact, once past the esophagus the majority of foreign bodies ingested will move uneventfully throughout the alimentary canal[4,5]. However, non-operative interventions are still necessary in 10%-20% of patients and surgery in 1%[1], especially in the cases of ingested multiple sharp and long objects.

Timely diagnosis can be difficult as the ingestion goes unreported until the onset of symptoms which may be remote from the actual time of ingestion[6,7]. Radiograph films can identify most foreign objects; however, they do not readily detect fish or chicken bones, wood, plastic, most glass and thin metals objects[8]. Contrast examinations with barium should not be performed routinely because coating the foreign body and esophageal mucosa can compromise the subsequent endoscopy[9]; they should be performed cautiously if symptoms are not clear in order to clarify the presence of a foreign body[10]. CT scans, though commonly used, can be negative with radiolucent objects though their yield can be enhanced with 3D reconstruction[11,12].

Management decision for patients depend on a variety of factors including age, the object ingested, the location of the ingested object, the urgency of removal, the number of objects swallowed and the skill of the endoscopist. The timing should be contingent on the perceived risks of obstruction and/or perforation. Most physicians would prefer the endoscopic route since it avoids surgery, has reduced costs, is relatively accessible, allows simultaneous diagnosis of other diseases and has a low rate of mortality[3]. Endoscopic removal of foreign objects should be performed by experienced endoscopists using accessories such as snares, Dormia baskets or strong-toothed graspers[13]. Objects longer than 6 to 10 cm such as spoons and toothbrushes should be removed using a longer (> 45 cm) overtube that extends beyond the gastroesophageal junction. The object can be grasped with a snare or basket and maneuvered into the overtube[1]. The entire apparatus, foreign body, overtube and endoscope can then be withdrawn in one motion, avoiding losing grasp of the object in the overtube itself[14]. The endoscopic retrieval of sharp objects is accomplished using retrieval forceps (rat-tooth, biopsy or alligator jaws) or a snare. The risk of mucosal injury during sharp-object retrieval can be minimized by orientating the object with the point trailing during the extraction with an overtube[13]. In the presented case, endoscopic retrieval could have been facilitated by using an overtube but all prison systems are not equipped for advanced endoscopic interventions and lack of it did not deter successful retrieval of the multiple swallowed objects.

Urgent retrieval is necessary to avoid complications of the object ingested. Those patients with a past history of gastrointestinal tract surgery or congenital gut malformations are at an increased risk of obstruction or perforation. Our patient had a past history of gastrointestinal operations, mitigating the possibility of spontaneous evacuation. Additionally, the properties of the objects themselves determine the degree of complications associated with ingestion. Long, slender items have a more difficult time transversing the tortuous gastrointestinal tract; hence they are more likely to stay lodged[4,15]. This is further complicated by ingesting multiple long, slender objects each of which carries the risk of obstruction or perforation. In general, objects wider than 2 cm do not pass though the pylorus and tend to lodge in the stomach while objects longer than 5 cm tend to get caught in the duodenal sweep[16,17]. Additionally, it is recommended that sharp-pointed objects like pens in this case, should be removed even if the patient is asymptomatic[13] as the mortality and the risk of perforations increases with these objects[1,2,5] leading to peritonitis, abscess formation, inflammatory mass formation, obstruction, fistulae, hemorrhage or even death[15,18].

Deliberate ingestion of foreign bodies by prison inmates and psychiatry patients pose unique challenges for endoscopic removal. Though most objects can pass spontaneously, the presentation of symptoms necessitated a treatment option. It is important to evaluate each individual case with respect to the comfort level of the endoscopist and the emergent nature of the intervention. Attempt at endoscopic retrieval is the current standard of care for foreign body ingestions in the absence of features of perforation or major vessel penetration. Impaction of multiple long, rigid objects in the duodenum and their successful retrieval across the C-loop of the duodenum and the pharynges-esophageal curve are the unique features in this reported case.