Amyloidosis of the gastrointestinal tract is a rare disease that presents with common, nonspecific signs and symptoms. It may affect any part of the gastrointestinal tract from mouth to anus. The clinical and endoscopic features are diverse and may mimic other diseases, such as inflammatory bowel disease, malignancy, ischemic colitis and, at times, collagenous colitis. We describe an uncommon case of rectal bleeding and anemia with polypoid lesions and ulcerations in the colon, as the presenting symptom of AL amyloidosis and light chain multiple myeloma.

Amyloidosis is characterized by extracellular deposition of abnormal protein. The current nomenclature consists of the first letter, A (for amyloid), followed by a description of the precursor protein. AL amyloidosis is associated with plasma cell dyscrasia and monoclonal light chains in serum and/or urine. Fifteen percent of patients with AL amyloidosis have multiple myeloma and this type of amyloidosis is the prominent type involving the gastrointestinal tract.

Patient’s signs and symptoms depend on the part of the gastrointestinal tract involved. Amyloidosis of stomach and duodenum is uncommon with most patients being asymptomatic. Symptoms may include nausea, vomiting, hematemesis and epigastric pain. Duodenal involvement, sometimes without gastric disease, includes scalloped folds, duodenitis, ulcers, masses, hypotonia, and dilatation. The most common endoscopic findings in the small bowel include fine granular appearance, polyps, erosions, ulcerations, or mucosal friability[1].

When present, amyloid deposition is greatest in the small intestine. In 31% of patients with amyloidosis, the small bowel was found to be affected at autopsy. Clinically, patients with amyloidosis of the small intestine may present with diarrhea, steatorrhea, Protein LOSING enteropathy, hemorrhage, obstruction, mesenteric ischemia, intussusceptions, pneumatosis intestinalis or pseudo-obstruction.

Amyloid of the colon is most frequently located in the descending and recto sigmoid colon. The clinical manifestations in the colon may mimic other diseases, such as inflammatory bowel disease, malignancy, ischemic colitis and at times collagenous colitis. Endoscopically, one may find polypoid lesions, ulcerations or nodules.

A 55-year-old man was referred to undergo colonoscopy because of rectal bleeding and normocytic anemia. The patient was known to have severe atherosclerotic cardiovascular disease, with ischemic heart disease, peripheral vascular disease and congestive heart failure, and was on low dose aspirin and clopidogrel chronically.

Colonoscopy revealed a normal appearing rectum, with fresh blood in the sigmoid colon and descending colon. After cleansing the blood, a number of small ulcers, petechial bleeding of the mucosa and polypoid protrusions were seen (Figure 1). Some of these polypoid protrusions had a bluish discoloration and some had blood clots on top of them. In between these lesions, the colonic mucosa appeared normal. Transverse and ascending colon were without any endoscopic finding as was the terminal ileum. 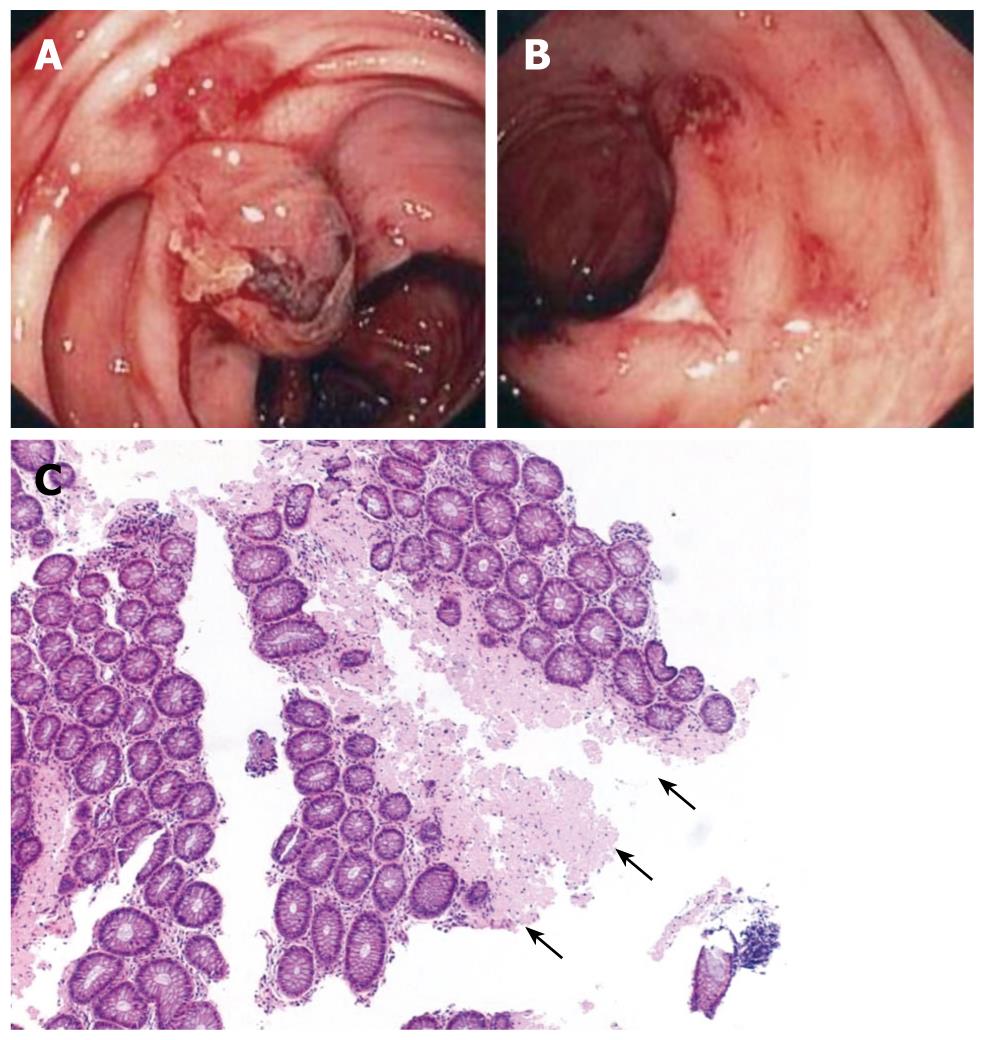 Figure 1 Endoscopic and pathology figures of the polypoid lesions found in the colon (A), the duodenal ulcerations (B), and the typical Amyloid appearance in the colon (C). A: Polypoid Lesion in the descending colon; B: Ulceration of the duodenum mucosa; C: Homogeneous and amorphous Amyloid in the submucosa of the rectum (arrows).

The patient was hospitalized for observation and aspirin and clopidogrel were discontinued. He was hemodynamic stable and hemoglobin levels did not decline. Repeated colonoscopy and gastroscopy were done a week later. Gastroscopy revealed small shallow ulcers in the first and second parts of the duodenum and small petechial bleedings, but without any evidence of fresh blood in the lumen (Figure 1B). Biopsies were taken from the edges of ulcers. Colonoscopy showed similar findings to those seen a week before. Biopsies were taken from ulcer edges and polypoid lesions.

Hematoxylin and eosin stain showed a homogeneous, amorphous material, mainly in the submucosa (Figure 1C). Congo red stain produced the characteristic apple-green birefringence in polarized light, typical for amyloid, both in the small and large bowel.

Bone marrow biopsy revealed myeloma cells with kappa light chains, but no amyloid was found on his bone marrow biopsy. Chemotherapy (bortezomib) for multiple myeloma was started. On follow up of more than ten months, there was no further rectal bleeding and hemoglobin levels were stable.

We describe an uncommon case of rectal bleeding and anemia as the presenting symptom of AL amyloidosis and light chain multiple myeloma. Bleeding, which is the presenting symptom in 25%-45% of patients with amyloidosis of the colon, may be due to ischemia, infarction, ulceration, an infiltrating lesion or secondary to generalized oozing without an identifiable source[2]. This usually occurs in the absence of coagulation disturbances.

Endoscopically, AL amyloidosis typically forms polypoid protrusions, while AA amyloidosis is usually characterized by a fine granular appearance. Other endoscopic features of colonic amyloidosis are ulcerations, diffusely distributed petechia, nodules, luminal narrowing, loss of haustrations and thick mucosal folds, part of which was also seen in our patient[3]. Anemia is not a prominent feature in AL amyloid, but when present, is most commonly due to multiple myeloma, renal insufficiency and gastrointestinal bleeding.

The organ to be biopsied in order to diagnose amyloidosis has classically been the rectum or subcutaneous fat. Submucosal vessels should be sampled in rectal biopsies in order to get the reported yield of 75%-94%. Amyloid is found in bone marrow biopsies in about 56% of patients[4]. Under light microscopy, amyloid appears homogeneous and amorphous. It stains pink with hematoxylin and eosin and displays metachromasia with methyl violet. Congo red is the most specific stain, producing the characteristic red appearance in normal light and apple-green birefringence in polarized light. The routine method to determine the amyloid type is immunohistochemistry. While AA amyloid can be identified in all cases, a significant proportion of AL amyloid deposits cannot be stained. AL amyloidosis, then, is a diagnosis of exclusion.

In conclusion, AL amyloidosis of the gastrointestinal tract is a rare disease that presents with common, nonspecific complaints. The endoscopic detection of a submucosal petechial hematomas and polypoid lesions in the setting of gastrointestinal bleeding should raise suspicion of the disease.