AIM: To compare the effects of rabeprazole and lafutidine on post-endoscopic submucosal dissection (ESD) gastric ulcers.

METHODS: Patients with gastric tumors indicated for ESD were prospectively studied. After ESD, all patients were treated with intravenous omeprazole for the first 3 d. Patients were then randomly assigned to oral lafutidine or rabeprazole. Ulcer size, ulcer size reduction rate, and ulcer stage were evaluated 4 wk later. Occurrence of complication was monitored throughout the 4-wk period.

RESULTS: Sixty five patients were enrolled in the study, and 60 patients were subjected to the final analysis. In the lafutidine group (30 lesions in 29 patients), initial and 4-wk post-ESD ulcer sizes were 33.3 ± 9.2 and 10.5 ± 4.8 mm, respectively. In the rabeprazole group (34 lesions in 31 patients), the values were 34.7 ± 11.3 and 11.8 ± 6.7 mm, respectively. Ulcer size reduction rates in lafutidine and rabeprazole groups were 32.3% and 33.5%, respectively (P = 0.974). Ulcer stage 4 wk post-ESD did not differ significantly between the two groups (P = 0.868). Two cases in the rabeprazole group and no cases in the lafutidine group developed ulcer bleeding during the oral dose period, although the difference of bleeding rate between the two groups was not statistically significant (P = 0.157).

Endoscopic treatment for gastric neoplasms, such as early gastric cancer or adenoma, is now a routine procedure[1]. Endoscopic submucosal dissection (ESD) is a minimally invasive treatment that provides a high en bloc resection rate and allows for precise histologic staging[2,3]. Iatrogenic gastric ulcers created by ESD, however, are often rather large, and bleeding occasionally occurs in the post-ESD period. There is currently no consensus regarding the management of these iatrogenic ulcers.

This study was conducted in the Department of Gastroenterology and approved by the ethics committee of Kanto Medical Center. Written informed consent was obtained from all subjects prior to the study.

Between July 2005 and November 2006, 65 consecutive patients with early gastric cancer or a gastric adenoma that was considered curable with endoscopic treatment were enrolled in the study. The treated lesions were either adenomas with severe atypia, well-differentiated intramucosal cancers without ulcer findings, or well-differentiated intramucosal cancers less than 3 cm in size with ulcer findings. The diagnosis was based on endoscopic findings and histological examination of biopsied specimen. Endoscopic ultrasonography was not performed. Exclusion criteria included failure to obtain written informed consent, severe cardiopulmonary complications, and prior history of allergic reactions against H2RA or PPI. None of the patients had a previous history of upper gastrointestinal tract surgery. All patients agreed to take part in the study, and were treated by ESD. After ESD, all patients were treated with intravenous omeprazole for the first 3 d. Following omeprazole treatment, patients were randomly assigned to oral lafutidine (group L; 20 mg/d) or oral rabeprazole (group R; 10 mg/d). Doses of these agents were determined according to their standard doses. Ten mg/d of rabeprazole has been shown to have stronger suppressive effect on acid secretion compared to the full dose of omeprazole or lansoprazole[9], and so this dose was thought to be sufficient.

Endoscopic evaluation was performed 28 d after ESD. The size of the ulcer was defined as the longitudinal diameter of the gastric ulcer, and measured using measuring forceps (Olympus, Tokyo, Japan). Ulcer healing was assessed by measuring the changes in ulcer size and stage. The ulcer reduction rate was calculated as: (ulcer size 4 wk post ESD)/(ulcer size immediately after ESD procedure) × 100 (%)[10]. Gastric ulcer stage was classified using a 6-stage system Sakita-Miwa classification[11]: active (A1, A2), healing (H1, H2), and scarring (S1, S2) (Table 1). All cases were monitored for the occurrence of complications, including bleeding or perforation, throughout the 4-wk observation period.

We determined the sample size for the two groups so that the difference between the two study groups could be detected if the mean ulcer size of the group with the larger mean, if any, is larger than that for its counterpart at least by one-fourth (25.0%) of the mean for the former group. It was assumed that the mean ulcer size at day 28 for the group with the larger mean was 11.0, and that both groups had the same sd (5.0). Alpha was set to 0.10, while power was set to 0.70.

Continuous values and categorical parameters were analyzed by Student’s t-test and Pearson’s chi-square test, respectively. Ulcer sizes just before and after the oral dose period were compared between the two groups. The statistical difference of ulcer size reduction was determined by using the two-way repeated-measures ANOVA. A P-value of less than 0.05 was considered statistically significant. All analyses were performed with the use of SPSS software (15.0 J for Windows).

RESULTS
Effects of lafutidine and rabeprazole on post-ESD gastric ulcers

A total of 65 patients were enrolled in the study (Figure 1); 5 patients (3 in group L and 2 in group R) were, however,excluded from the final analysis. Of the 5 patients, 1 in group L and 2 in group R had to undergo additional surgical treatment after pathological examination because of submucosal invasion of the cancer; 1 in group L was newly diagnosed with pancreatic cancer after the treatment, and so follow-up esophagogastroduodenoscopy was not performed; and 1 in group L had to be treated for exacerbation of pre-existing Guillain-Barre syndrome after ESD and so follow-up esophagogastroduodenoscopy was not performed. Patient and lesion characteristics are shown in Table 2. There were 30 lesions in 29 patients in group L and 34 lesions in 31 patients in group R who completed the study, and there were no significant differences between the two groups with regard to patient characteristics (gender, age, body mass index, presence of serum anti-Helicobacter pylori antibody), initial endoscopic findings (ulcerated lesion or not, and location in the stomach), lesion depth on pathological examination, or post-ESD ulcer size. In group L, initial and 4-wk post-ESD ulcer sizes were 33.3 ± 9.2 and 10.5 ± 4.8 mm, respectively. In group R, the values were 34.7 ± 11.3 and 11.8 ± 6.7 mm, respectively. The ulcer size reduction rate in group L and group R was 32.3% and 33.5%, respectively (Table 3, P = 0.974). Ulcer stages at 4-wk post ESD in group L were: A1; 0 case (0%), A2; 1 (3%), H1; 10 (33%), H2; 16 (54%), S1; 2 (7%) and S2; 1 (3%); ulcer stages in group R were: A1; 0%, A2: 1 (3%), H1; 11 (32%), H2; 19 (56%), and S1; 3 (9%) (Table 4, P = 0.868). Thus, there were no significant differences in ulcer size, ulcer size reduction rate, or proportion of patients at each ulcer stage between the two groups 4 wk post ESD. 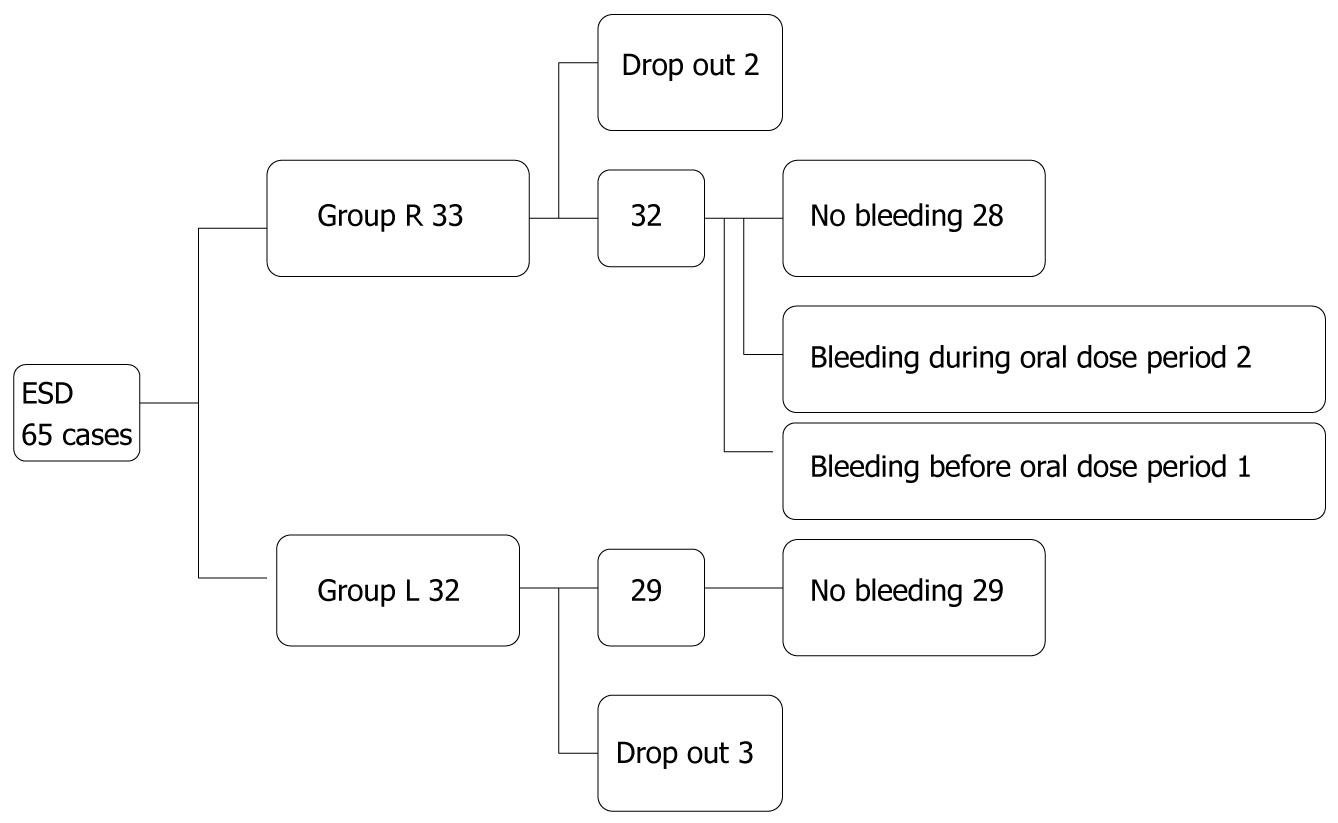 In recent studies of ulcers induced by endoscopic mucosal resection (EMR), omeprazole was reported to have anti-ulcer effects equivalent to[12,13] or greater than[10] those of famotidine, an H2RA. The difference in anti-ulcer effects, if any, may be due to differences in the acid suppression potency of the two compounds. Post-ESD/EMR ulcers, however, are artificial and iatrogenic, and there may be a role for cytoprotective agents in such conditions. Although the acid suppressive properties of famotidine and lafutidine are almost equivalent, lafutidine differs from famotidine in that it also has a cytoprotective property[4]. Several aspects of the mechanism of the cytoprotective property of lafutidine have been elucidated. Firstly, lafutidine does not directly protect epithelial cells, but increases the gastric mucosal blood flow through a mechanism involving capsaicin-sensitive afferent nerves[14]. In addition, it increases the thickness and mucin content of gastric mucus layer[15]. Therefore, we hypothesized that lafutidine and PPIs might have an equivalent anti-ulcer effect on post-ESD ulcers. To elucidate this issue, we compared the anti-ulcer effects of lafutidine and rabeprazole, a PPI. The pharmacologic effects of PPIs such as omeprazole and lansoprazole are influenced by a genetic polymorphism of cyp 2c19[16]. Rabeprazole is not only a highly potent PPI, but is also the least influenced by 2c19. Therefore, we chose rabeprazole as the PPI in the present study to elucidate whether lafutidine and a PPI have equivalent effects on post-ESD ulcers.

The results of the present study indicated that there were no significant differences in the ulcer reduction rate or ulcer stages between groups given lafutidine or rabeprazole for post-ESD ulcers. Two cases in group R developed bleeding from post-ESD ulcers within the oral treatment period (day 4 through day 28), whereas no cases in group L developed bleeding within that period, although this difference was not statistically significant. Thus, lafutidine and rabeprazole were equally effective for ulcer healing and preventing post-ESD ulcer bleeding. Considering the suggested superior anti-ulcer effect of omeprazole over famotidine for post-EMR ulcers[10], the results of our study suggest a therapeutic role for cytoprotective agents in post-ESD ulcers. At the same time, the importance of acid suppression in such a condition cannot be disregarded. H2RAs with a cytoprotective property may be reasonable treatment options for such conditions. Lafutidine also costs less than the PPIs. Although the present article doesn’t evaluate the costs-effectiveness of lafutidine, this could be the subject of a future study. Both H2RAs and PPIs are comparatively safe medications. In fact, there were no side effects observed in the present study in either group.

In conclusion, lafutidine, an H2RA with cytoprotective property, exerts no less anti-ulcer effects than rabeprazole at a lower cost in post-ESD gastric ulcers.