It is of utmost importance to differentiate autoimmune pancreatitis (AIP) from pancreatic cancer (PC). Segmental AIP cases are sometimes difficult to differentiate from PC. On endoscopic retrograde cholangiopancreatography, long or skipped irregular narrowing of the main pancreatic duct (MPD), less upstream dilatation of the distal MPD, side branches derived from the narrowed portion of the MPD, absence of obstruction of the MPD, and stenosis of the intrahepatic bile duct suggest AIP rather than PC. Abundant infiltration of IgG4-positive plasma cells is frequently and rather specifically detected in the major duodenal papilla of AIP patients. IgG4-immunostaining of biopsy specimens obtained from the major duodenal papilla is useful for supporting a diagnosis of AIP with pancreatic head involvement. On endoscopic ultrasonography (EUS), hyperechoic spots in the hypoechoic mass and the duct-penetrating sign suggest AIP rather than PC. EUS and intraductal ultrasonography sometimes show wall thickening of the common bile duct even in the segment in which abnormalities are not clearly observed with cholangiography in AIP patients. EUS-guided fine needle aspiration, especially EUS-guided Tru-Cut biopsy, is useful to diagnose AIP, as well as to exclude PC.

Autoimmune pancreatitis (AIP) is a recently identified clinical entity of pancreatitis in which it is suspected that autoimmune mechanisms are involved in the pathogenesis. AIP is characterized clinically by elderly male preponderance, frequent initial symptom of obstructive jaundice without pain, occasional association with impaired pancreatic endocrine or exocrine function, various extrapancreatic lesions, and a favorable response to steroid therapy. AIP is characterized radiologically by irregular narrowing of the main pancreatic duct (MPD) and enlargement of the pancreas; and serologically by elevation of serum IgG, or IgG4 levels, and the presence of some autoantibodies. Histopathological characteristics are dense lymphoplasmacytic infiltration with fibrosis and obliterative phlebitis in the pancreas[1-3]. Since there is currently no diagnostic serological marker, and as it is usually difficult to take adequate specimens from the pancreas, AIP is currently diagnosed based on a combination of clinical, laboratory, and imaging studies[4-6]. In 2006, the Japan Pancreas Society proposed the “Clinical Diagnostic Criteria for Autoimmune Pancreatitis”[4]. It contained three items: (1) radiological imaging showing diffuse or localized enlargement of the pancreas and diffuse or segmental irregular narrowing of the MPD; (2) laboratory data showing abnormally elevated levels of serum gammaglobulin, IgG or IgG4, or the presence of autoantibodies; and (3) histological findings showing marked interlobular fibrosis and prominent lymphoplasmacytic infiltration in the pancreas. To make the diagnosis of AIP, criterion 1 is mandatory, and either criterion 2 or criterion 3 must be present.

AIP responds dramatically to steroid therapy and therefore to avoid unnecessary surgery, an accurate diagnosis of AIP is required. The most important disease that should be differentiated from AIP is pancreatic cancer (PC)[1-3,7]. Serum IgG4 levels are elevated most frequently in AIP patients. However, the sensitivity of elevated serum IgG4 levels in AIP patients is reported to be 73%-80%[8,9], and elevation of serum IgG4 level is detected in some cases of PC[10,11]. In particular, AIP forming a mass-like lesion in the head of the pancreas is sometimes difficult to differentiate from locally advanced pancreatic head cancer. Based on our experience with 50 cases of AIP, this review focuses on the endoscopic approach for diagnosing AIP, with special emphasis on differentiating AIP from PC.

Figure 1 Diffuse irregular narrowing of the main pancreatic duct of an AIP patient on ERP. 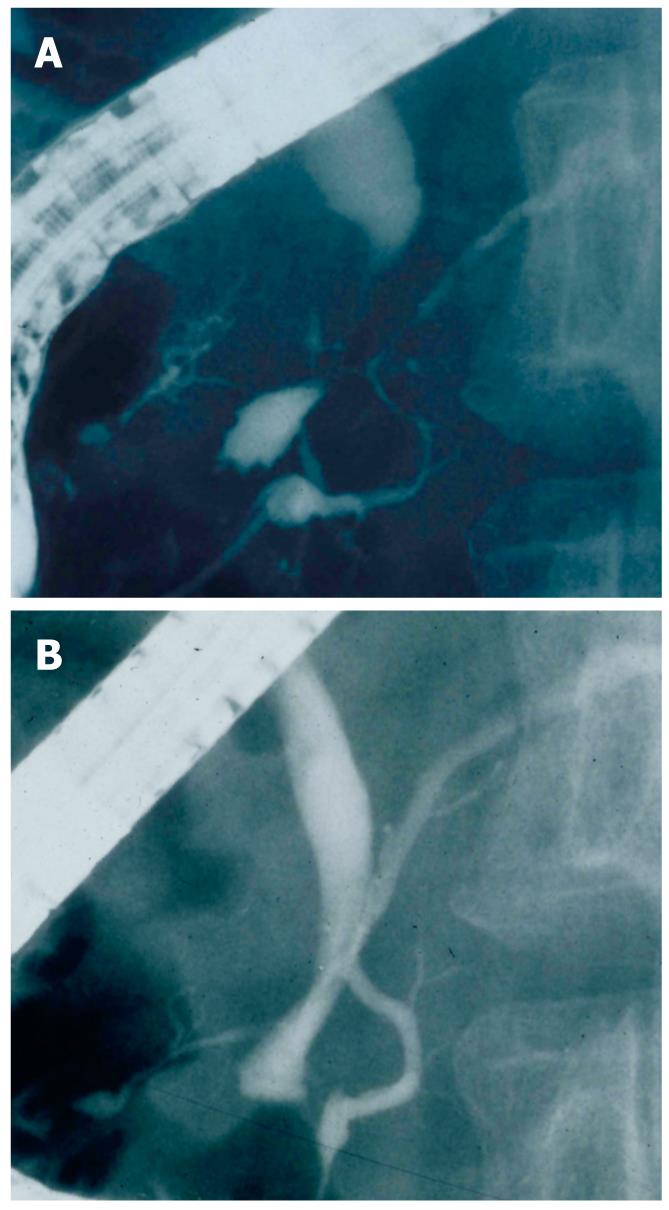 On endoscopic retrograde cholangiography, stenosis of the lower bile duct was detected frequently in both AIP and PC patients (Figure 2A). Brushing cytology of the stenotic biliary lesion and cytology of the bile via an endoscopic nasobiliary drainage tube inserted to manage jaundice, are useful to differentiate AIP from pancreatic or biliary cancer. Stenosis of the intrahepatic bile duct was detected in a few AIP patients, but it was not detected in PC patients. When AIP patients develop stenosis in the intrahepatic bile duct, the cholangiographic appearance is similar to that of primary sclerosing cholangitis (PSC)[13,14]. A long stricture was detected in the hepatic hilar region in AIP patients involving the intrahepatic bile ducts, but the diffusely distributed, beaded and pruned-tree appearance, that is usually detected in PSC patients was not detected in AIP patients[12,13]. Stenosis of the hilar bile duct in AIP patients should be also differentiated from cholangiocarcinoma at the hepatic hilus, these diseases can be differentiated by the absence of the pancreatic abnormalities in patients with cholangiocarcinoma at the hepatic hilus.

Both pancreatic and biliary lesions improve 2-4 wk after starting oral steroid therapy (initial prednisolone dose: 30 mg/d) (Figure 2B). A poor response to steroid therapy should raise the possibility of PC and the need for re-evaluation of the diagnosis.

ENDOSCOPIC OBSERVATION AND BIOPSY OF THE MAJOR DUODENAL PAPILLA 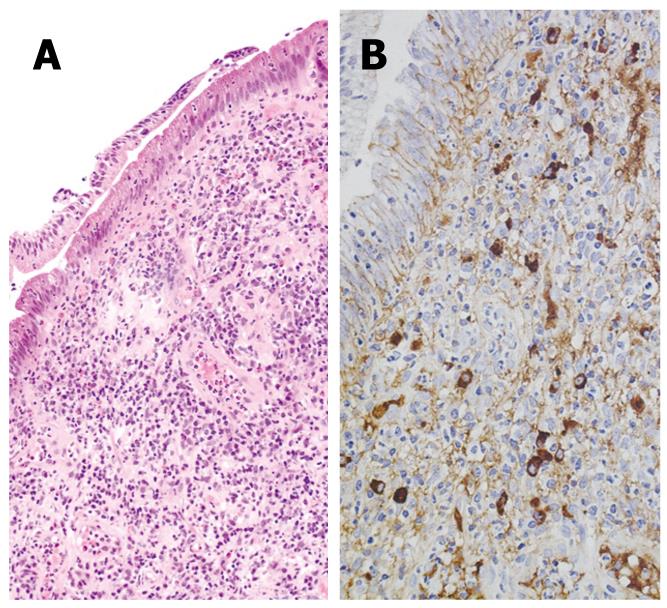 Endoscopic ultrasonography (EUS) imaging of AIP shows hypoechoic enlargement of the pancreas with hypoechoic spots. A lobular outer gland margin of the pancreas or a hyperechoic pancreatic ductal margin, which is frequently detected in alcoholic chronic pancreatitis, is rarely observed in AIP patients. A hypoechoic mass lesion detected in segmental AIP patients is difficult to differentiate from PC (Figure 4A). Hyperechoic spots in a hypoechoic mass and the duct-penetrating sign suggest AIP rather than PC. Hyperechoic spots may correspond to compressed pancreatic ducts. The lower bile duct, corresponding to the stenotic portion on ERCP, shows marked wall thickening with a smooth configuration of the outermost layer on EUS and intraductal ultrasonography (IDUS)[18]. This finding suggests that the bile duct wall thickening itself causes the biliary stenosis, and that it is not caused by extrinsic compression from inflammatory pancreatic tissue in AIP. EUS and IDUS sometimes show wall thickening of the common bile duct even in the segment in which abnormalities are not clearly observed on cholangiography in AIP patients (Figure 5)[19]. 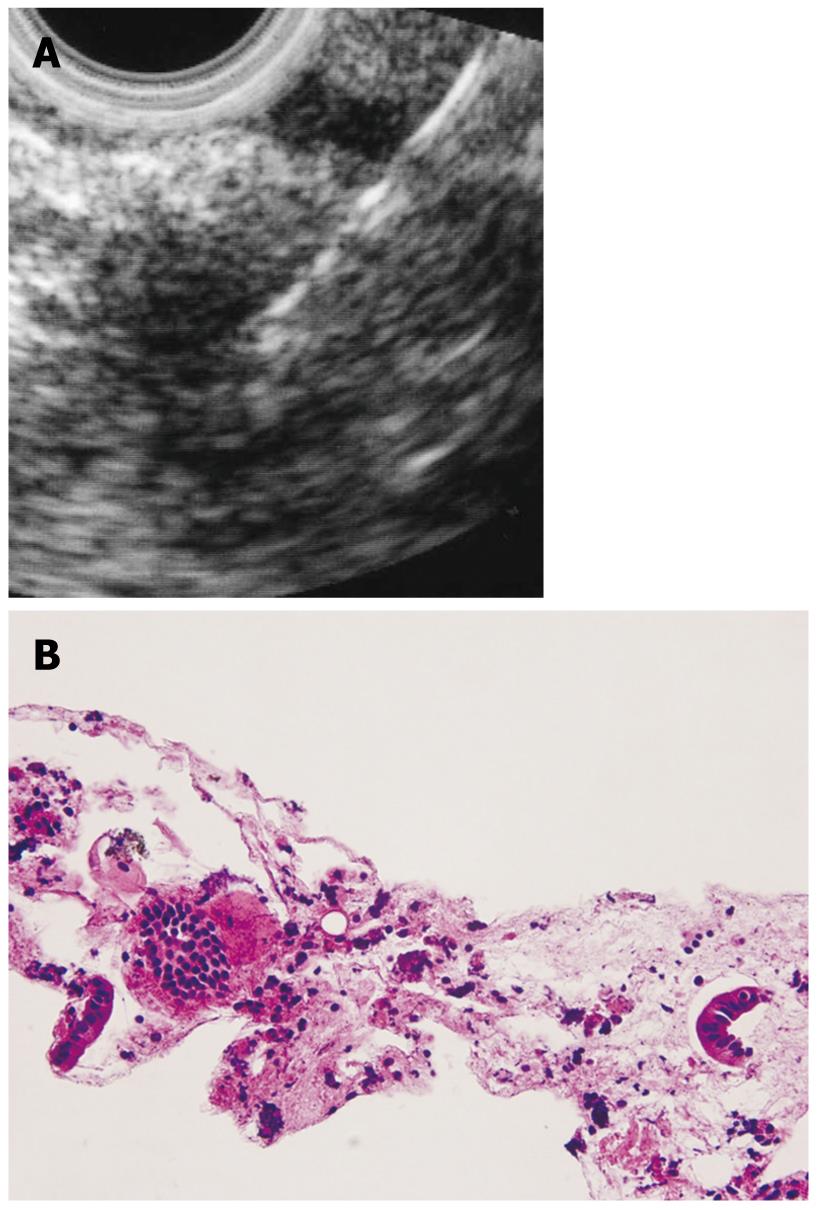 Figure 4 A hypoechoic mass in an AIP patient. A: Endoscopic ultrasonography finding. EUS-FNA was performed to this mass lesion; B: Histology of the specimen gained by EUS-FNA (HE). 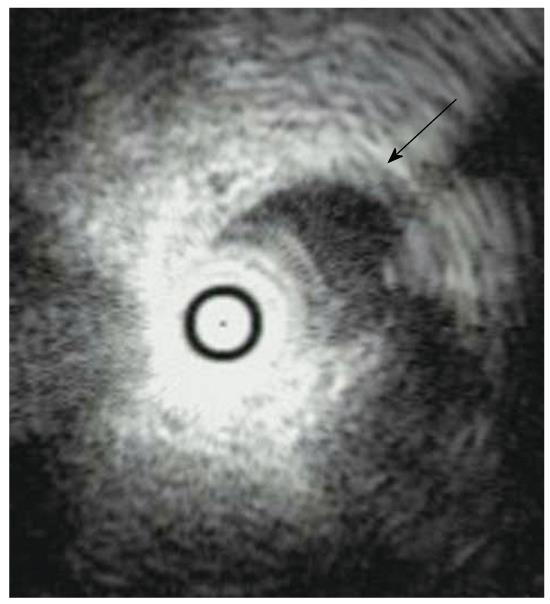 Endoscopic ultrasonography-guided fine needle aspiration (EUS-FNA) can be safely performed at the same time as diagnostic EUS, and it will become an established technique to evaluate pancreatic masses. In segmental AIP cases, EUS-FNA is useful to exclude the possibility of PC. The presence of cellular stromal fragments with prominent lymphocytosis either within the stroma or in the background can support a clinical diagnosis of AIP (Figure 4B)[20]. Furthermore, the presence of many IgG4-positive plasma cells in the aspirated specimen examined by IgG4-immunostaining provides more support for the diagnosis of AIP. However, cytological examination of EUS-FNA specimens is sometimes insufficient for diagnosing AIP due to the small sample and lack of tissue architecture. To overcome the limitations of needles which only allow cytological review, large caliber cutting biopsy needles have been developed that acquire samples in which tissue architecture can be assessed and histological examination performed. Endoscopic ultrasonography-guided Tru-Cut biopsy (EUS-TCB) acquires core specimens that preserve tissue architecture and permit histological review and diagnosis of AIP. Histological features vary, but the most common finding is fibrosis and an intense inflammatory cell infiltrate comprised mostly of lymphocytes and plasma cells, usually surrounding medium- and large-sized interlobular ducts accompanied by an obliterative phlebitis predominantly involving venules. According to a Mayo Clinic study, TCB specimens were considered diagnostic or strongly suggestive in 12/14 AIP patients[21].

It is most important to differentiate AIP from PC. Long or skipped narrowed portions with side branches of the main pancreatic duct without upstream dilatation, and stenosis of the intrahepatic bile duct on ERCP suggest AIP rather than PC. IgG4-immunostaining of biopsy specimens obtained from the major duodenal papilla is useful for supporting a diagnosis of AIP with pancreatic head involvement. On EUS, hyperechoic spots in a hypoechoic mass and the duct-penetrating sign suggest AIP rather than PC. EUS-FNA, especially EUS-TCB, is useful to diagnose AIP, as well as to exclude PC.