Ménétrier’s disease is a rare condition characterized by enlarged gastric folds, usually located in the whole body and fundus of the stomach. This report presents an unusual case of localized Ménétrier’s disease elevated by a submucosal lipoma and thus looking like a polypoid mass and causing an episode of upper gastrointestinal bleeding. The mass was successfully removed with endoscopic submucosal dissection.

Esophagogastroduodenoscopy was performed on a 76-year-old male patient after an episode of upper gastrointestinal bleeding, manifesting as fatigue and melena. A large polypoid mass (4 cm × 1 cm) with enlarged mucosal folds was found in the body of the stomach, between the lesser curvature and posterior wall. A small ulcer at the distal end of the mass was identified as the source of the bleeding. Biopsy was negative for neoplasia. Computed tomography showed a submucosal lesion beneath the affected mucosa, most likely a lipoma. The mass was removed en bloc with tunneling endoscopic submucosal dissection. Final pathology determined that the mass included Ménétrier’s disease and a submucosal lipoma. The patient was scheduled for follow-up esophagogastroduodenoscopy.

Localized Ménétrier’s disease can coexist with a submucosal lipoma creating a polypoid mass with risk of bleeding.

Core Tip: We report the first case of localized Ménétrier’s disease coexisting with a submucosal lipoma. The elevation of the affected mucosa made it prone to mechanical damage and caused an episode of upper gastrointestinal bleeding. Tunneling endoscopic submucosal dissection proved to be an effective method of resecting such a lesion. Since the remaining mucosa seemed unaffected by the disease, we expect the resection to be curative.

Ménétrier’s disease is rare; only a few hundred cases have been reported worldwide. Characteristic features of the disease are gastrointestinal symptoms, enlarged gastric folds (usually in the whole body and fundus of the stomach) and protein-losing gastropathy, which manifests as hypoalbuminemia and peripheral edema[1,2]. The disease is associated with a higher risk of developing gastric adenocarcinoma[3].

We report an infrequent case of localized Ménétrier’s disease elevated by an underlying submucosal lipoma, making it look like a polypoid mass. The mass was successfully removed with tunneling endoscopic submucosal dissection (ESD).

A 76-year-old White male was referred for esophagogastroduodenoscopy (EGD) after an episode of upper gastrointestinal bleeding.

The patient had a history of smoking in the past (30 pack-years). However, he had not smoked for 4 years and denied drinking alcohol. There was no relevant family history.

The patient’s height was 183 cm, weight was 80 kg, and body mass index was 23.89. Vitals upon admission were: heart rate, 50 beats/min; blood pressure, 118/48 mmHg; respiratory rate, 14/min; and body temperature, 36 °C. There was no abdominal tenderness and no peripheral edema.

Laboratory results were not relevant. Serum protein or albumin levels were not tested because Ménétrier’s disease was not suspected at the time.

EGD revealed a polypoid mass (4 cm × 1 cm) with enlarged mucosal folds in the body of the stomach between the lesser curvature and posterior wall (Figure 1A). The mass was cohesive and somewhat stiff in contact with the forceps. A small ulcer at the distal end of the mass was identified as the source of the bleeding (Figure 1B). Standard and deep biopsy were taken from the distal end of the mass, and both were negative for neoplasia. Except for the mass, the mucosa was normal, and gastric folds were not enlarged.

Figure 1 Polypoid mass found in the stomach during esophagogastroduodenoscopy. A: A mass (4 cm × 1 cm) with enlarged mucosal folds in the body of the stomach between the lesser curvature and posterior wall; B: A small ulcer at the distal end of the mass.
Imaging examinations

Computed tomography of the abdomen with contrast enhancement showed a submucosal lipoma (49 mm × 19 mm) in the body of the stomach, elevating the mucosa (Figure 2). The stomach was otherwise normal. There was no visible infiltration of surrounding tissue and no enlarged lymph nodes.

Figure 2 Computed tomography of the abdomen with contrast enhancement. A: A submucosal lesion in the stomach. Mean density of -89 HU suggested a submucosal lipoma; B: Length, 4.86 cm; C: Width, 1.96 cm.
TREATMENT

The mass was removed en bloc via tunneling ESD (Figure 3).

Figure 3 Resection of the mass via tunneling endoscopic submucosal dissection. A: A tunnel was created in the submucosal layer beneath the mass; B: Dissection was performed on both sides of the tunnel; C: Muscular defects were closed, and mucosal margins approximated with clips.
FINAL DIAGNOSIS

The final diagnosis of Ménétrier’s disease and submucosal lipoma was determined by pathological examination of the resected specimen (Figure 4). Upon macroscopic examination, the gastric mucosa was found to be focally thickened (up to 1.5 cm in width) with tortuous folds and elevation of the surface, which gave the mucosa cobblestone or cerebriform appearance (Figure 5 and Figure 6). Histologically, the dominant feature was foveolar hyperplasia of gastric glands (Figure 7). The surface and glandular mucous cells were elongated, cystically dilated and tortuous, which can be described as a “corkscrew-like appearance” (Figure 5B, Figure 6A, and Figure 8A). Additionally, cystic dilation of the deep glands was observed (Figure 5A). Foveolar hyperplasia was accompanied by oxyntic atrophy with the loss of chief and parietal cells, especially in the area adjacent to cystically dilated deep glands. Muscularis mucosae was focally thickened and branched out to the lamina propria with vertical strands of smooth muscles (Figure 6B). Among microscopic changes of the mucosa, predominant chronic inflammatory infiltrate of low intensity with some scattered eosinophils was present in the lamina propria (Figure 6C). Moreover, a lipoma was identified in the submucosal layer (Figure 6 and Figure 8). This benign lesion was located within the submucosal border without breaching the muscularis mucosae. It simultaneously lifted the mucosal layer, described as an elevation of the surface during the macroscopic examination. The immunohistochemical tests showed no Helicobacter pylori (H. pylori) infection.

Figure 4 Resected specimen. A: Immediately after resection, enlarged gastric folds were observed on the surface; B: Intersected specimen in the Pathology Department. Yellow tissue of the submucosal lipoma was observed. 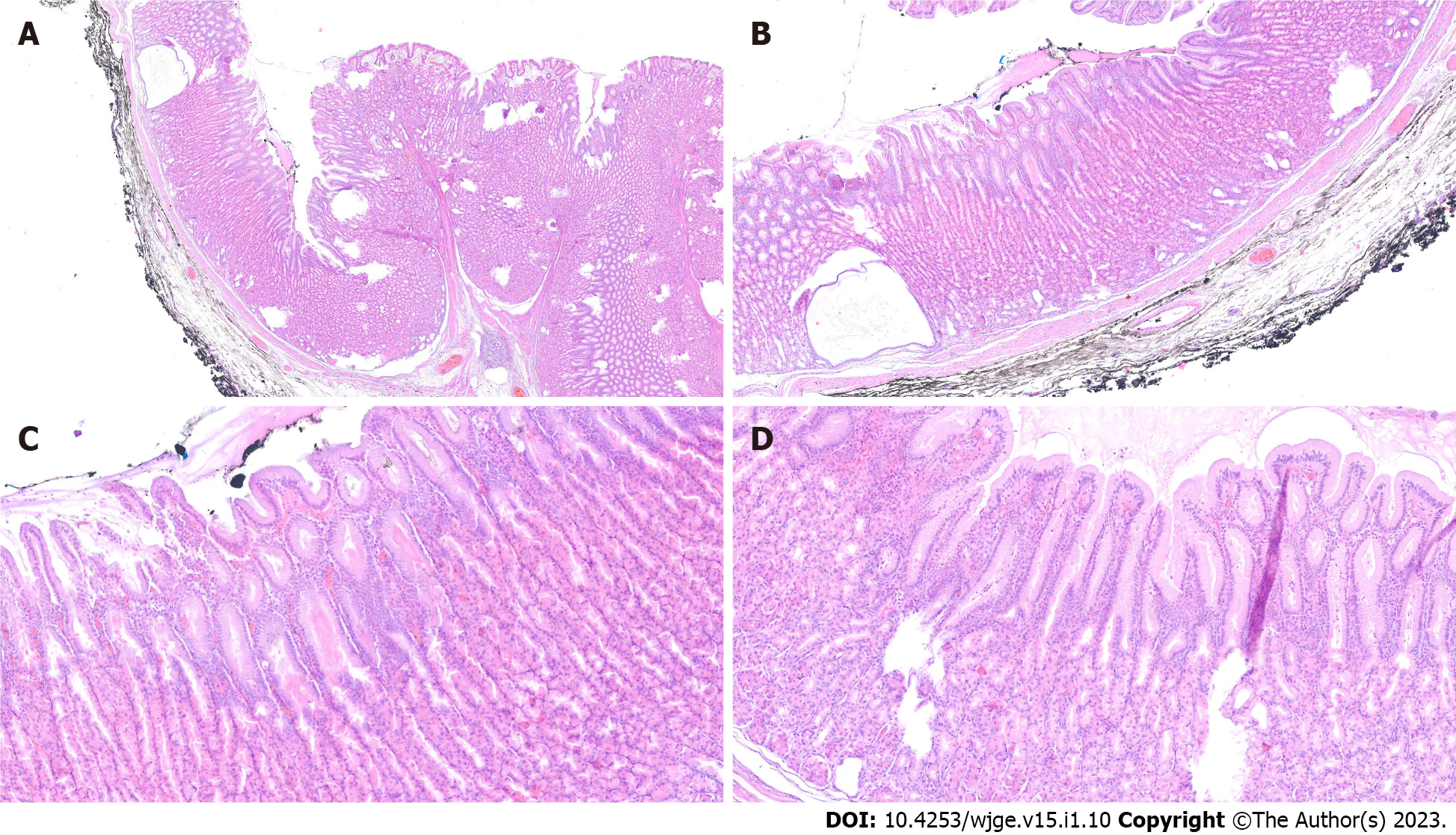 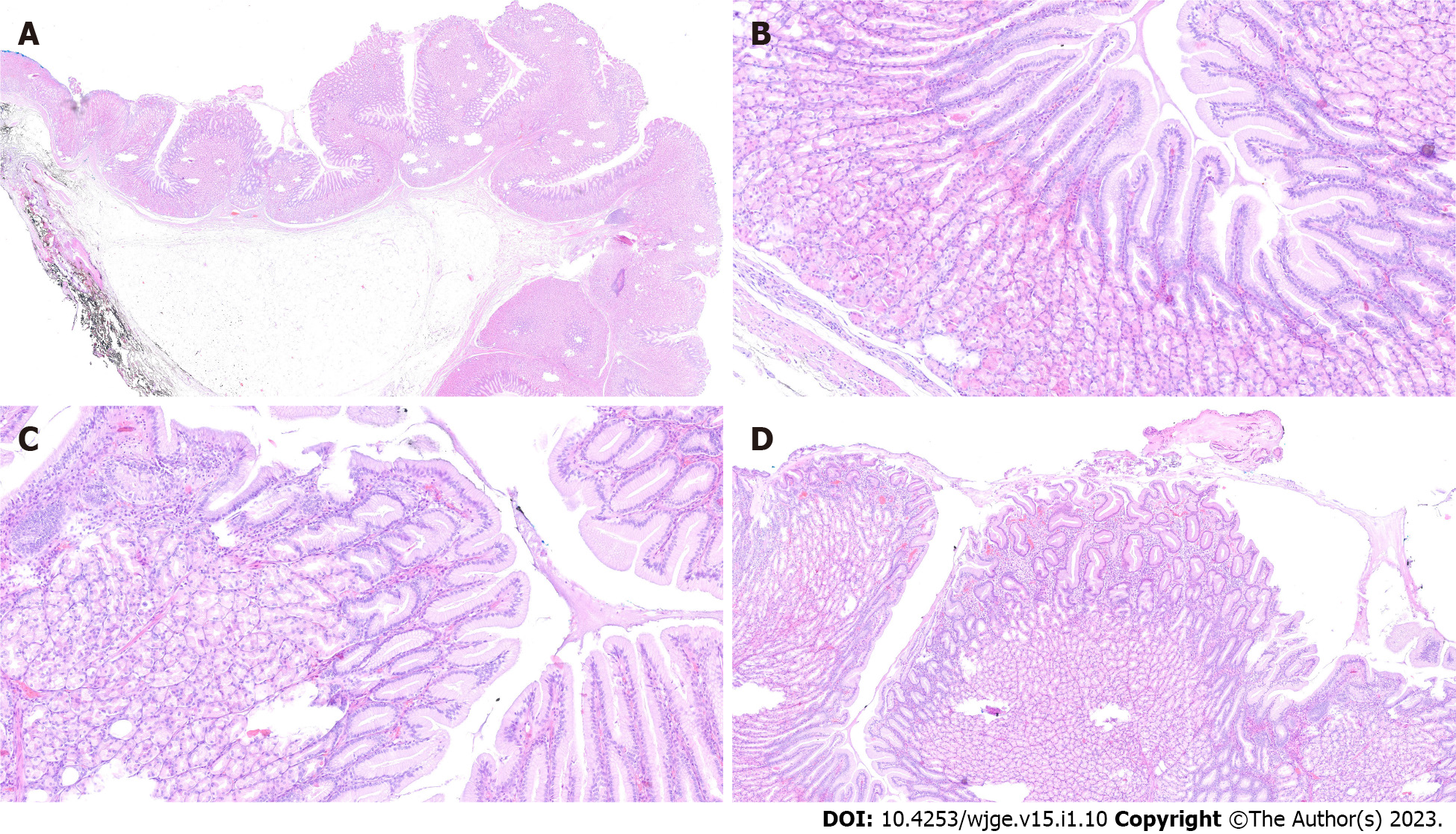 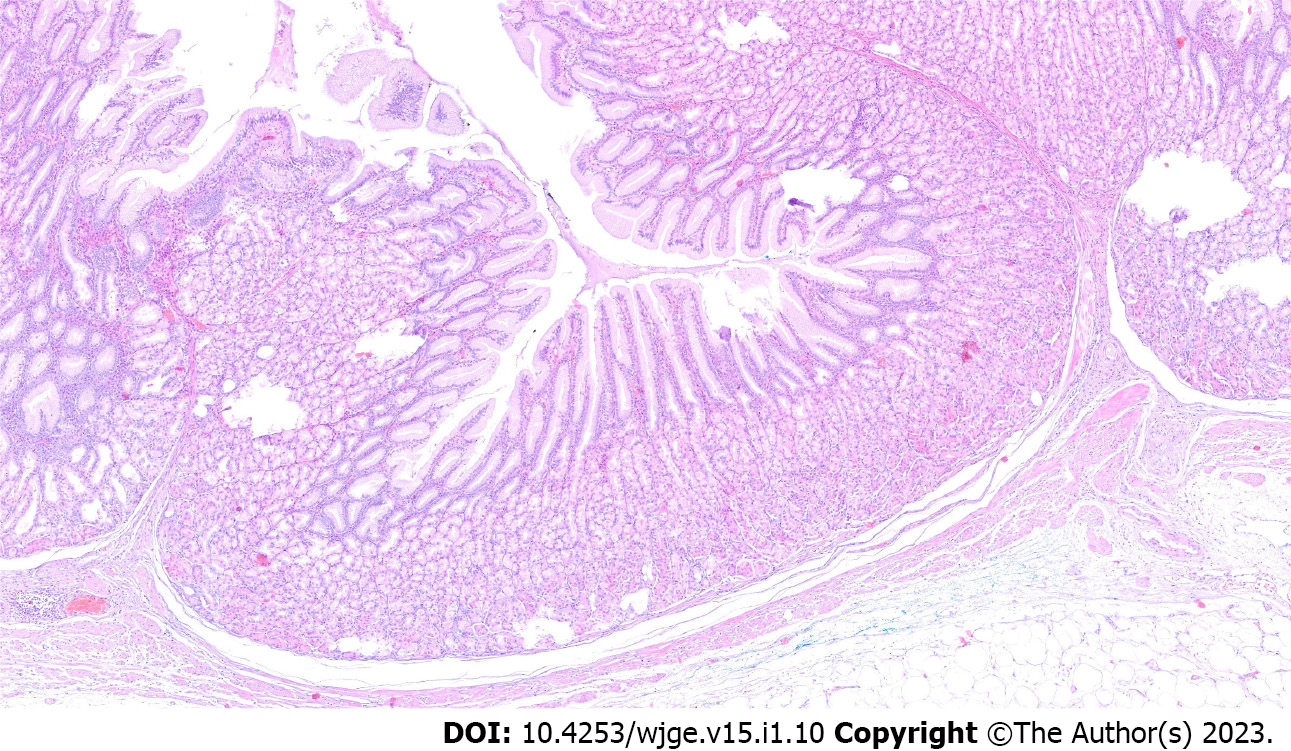 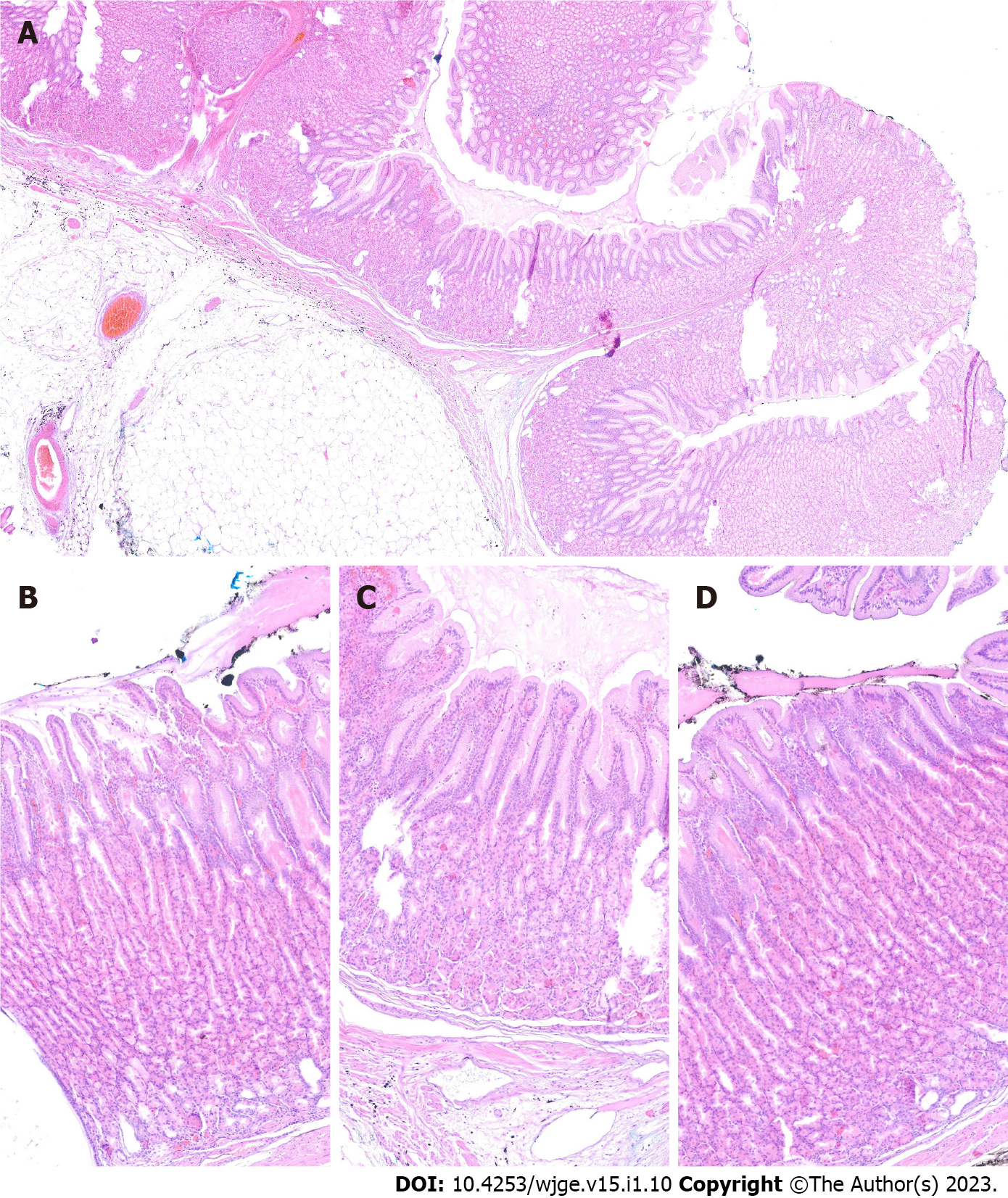 Figure 8 The mucosa with changes in the course of Ménétrier’s disease and the adjacent submucosal lipoma. The lipoma was adjacent to the mucosa without crossing its borders. A: Low magnification; B, C and D: Representative images taken at high magnification.
OUTCOME AND FOLLOW-UP

The patient’s symptoms subsided after the intervention, and he was scheduled for follow-up EGD.

Clinical symptoms of Ménétrier’s disease are nonspecific and include abdominal pain, nausea, vomiting, asthenia, anorexia, weight loss and peripheral edema[1,2]. Among these, our patient presented only with recurrent abdominal pain. He was older than most patients at the time of diagnosis since the disease is most often diagnosed between the age of 30 and 60 years. It is diagnosed more frequently in males[1,2].

The etiology of Ménétrier’s disease in most cases is unknown. It is generally considered to be acquired, but a rare familial form has been reported in siblings. Some cases have been linked to H. pylori with regression after treatment of the infection. In our patient, the immunohistochemical test for H. pylori was negative. There is also a subtype occurring in children, associated with cytomegalovirus infection[1,2].

The definite pathophysiology of Ménétrier’s disease is still being investigated. One of the theories is linked to increased production of transforming growth factor-alpha (TGF-α) and as a consequence increased signaling of the epidermal growth factor receptor (EGFR). One consequence of TGF-α overexpression is cellular proliferation, which may trigger neoplastic transformation. Studies on mice have shown that TGF-α overexpression in the stomach mucosa showed changes characteristic of Ménétrier’s disease[4-6]. Furthermore, studies on Ménétrier’s disease patients demonstrated a similar mechanism[7,8]. Increased overexpression of TGF-α causes increased signaling of EGFR, a transmembrane receptor with tyrosine kinase activity that further triggers an intracellular signaling cascade, expanding the cell’s proliferation. Immunohistochemical reactions using TGF-α and EGFR are not routinely performed during the diagnostic process as they are not a requirement for the diagnosis of Ménétrier’s disease. However, in the future, it will be worth focusing on the study of the TGF-α and EGFR pathways in order to understand its pathophysiology and consequences.

Initially, Ménétrier’s disease was not suspected in our patient. His symptoms (epigastric pain, fatigue and melena) were not typical for this disease. Gastroscopic and imaging results did not indicate Ménétrier’s disease either. Gastric folds are usually enlarged in the whole body and fundus of the stomach, with antrum spared, although a localized form of the disease has been reported[1,3,9]. In this case, gastric folds were enlarged only on the surface of the mass in the body of the stomach. Biopsy of the affected mucosa usually confirms the diagnosis of Ménétrier’s disease, but in our case it did not show any significant changes in the mucosa. Nevertheless, it helped differentiate the origin of the mass.

Upper gastrointestinal bleeding has been reported as a rare manifestation of Ménétrier’s disease. The bleeding may present as hematemesis or, like in this case, as melena[10,11]. One patient developed deep vein thrombosis and received anticoagulation therapy, which led to gastrointestinal bleeding[12]. Iron deficiency anemia in patients with Ménétrier’s disease could be a sign of occult bleeding, but iron malabsorption should also be considered[13,14].

Hypoalbuminemia is present in the majority of patients with Ménétrier’s disease (85%), and in some cases causes peripheral edema[1]. Ménétrier’s disease should be considered in differential diagnosis of protein-losing gastropathy/enteropathy, and certain interventions may be necessary to normalize albumin level, such as H. pylori eradication, proton pump inhibitors, H2-blockers, anticholinergic drugs, corticosteroids or octreotide[15]. In this case, albumin level was not obtained during the diagnostic process or preoperative laboratory evaluation. It should be tested if Ménétrier’s disease is suspected or the patient presents with peripheral edema.

We report a highly unusual case of localized Ménétrier’s disease coexisting with a submucosal lipoma, which created a polypoid mass in the stomach. Successful resection was achieved with tunneling ESD.