Pancreatic metastases from squamous cell lung carcinoma (SCLC) are unusual. These lesions are often asymptomatic and detected incidentally or during follow-up investigations, occasionally several years after removal of the primary tumor.

A 56-year-old male with SCLC developed jaundice 1 mo after the cancer diagnosis. An abdominal computed tomography (CT) scan showed a mass in the pancreatic head with distention of both intra- and extrahepatic biliary ducts. Endoscopic retrograde cholangiopancreatography and sphincterotomy were performed first, culminating with plastic biliary stent placement. Cytological examination of the pancreatic mass sample collected by fine-needle aspiration (FNA) under endoscopic ultrasound (EUS) guidance revealed the presence of malignant cells compatible with well-differentiated squamous cell carcinoma. After liver function normalized, chemotherapy was initiated with carboplatin and paclitaxel; however, 4 d later, the patient presented dysphagia. Cervico-thoraco-abdominal CT showed tracheoesophageal fistula and stent migration. After replacement with a 10 cm/10 mm uncovered metallic biliary stent and treatment of the tracheoesophageal fistula with a fully covered esophageal stent, the patient was able to start oral feeding progressively. He died 9 mo after the initial diagnosis.

The diagnosis of pancreatic metastasis from SCLC is challenging for clinicians. EUS-FNA is the primary exam for confirmatory diagnosis.

Core Tip: The pancreatic metastasis of squamous lung carcinoma is a rare disease. There are a few cases in the literature that discuss the modality of diagnosis and the treatment of pancreatic metastasis. In this manuscript, we report our experience in the management of this case and the malignant tracheoesophageal fistula as a rare complication of squamous lung carcinoma.

Pancreatic tumors generally have a poor prognosis, and pancreatic cancer ranks as the fourth deadliest type of cancer among men and women[1]. Pancreatic metastases are rare[2]. Their prevalence is estimated at approximately 1%-5%[3]. Renal, lung, colorectal and breast tumors are the main primary tumor sites responsible for pancreatic metastases[2]. We report a case of squamous cell lung carcinoma with pancreatic metastasis in a 56-year-old male patient.

A 56-year-old male presented to the emergency room with complaints of cholestatic jaundice associated with pancreatic epigastralgia and deterioration of his general condition.

The patient reported that his symptoms had started 1 mo prior.

Three months before admission to our department, he had been diagnosed with and followed up for a left hilar lung squamous cell carcinoma, which had been discovered by bronchoscopy with transbronchial biopsy of the lung mass.

The patient self-reported being a 52 pack-year smoker, he had no family history.

The patient had obvious jaundice. The patient was afebrile but had epigastric tenderness.

Computed tomographic scanning revealed a tumoral hilar left process, dilation of the intrahepatic bile duct, 11 mm main bile duct and 4 mm Wirsung duct along with a 33 mm × 45 mm pseudotumoral mass of the pancreatic head (Figure 1A and B). 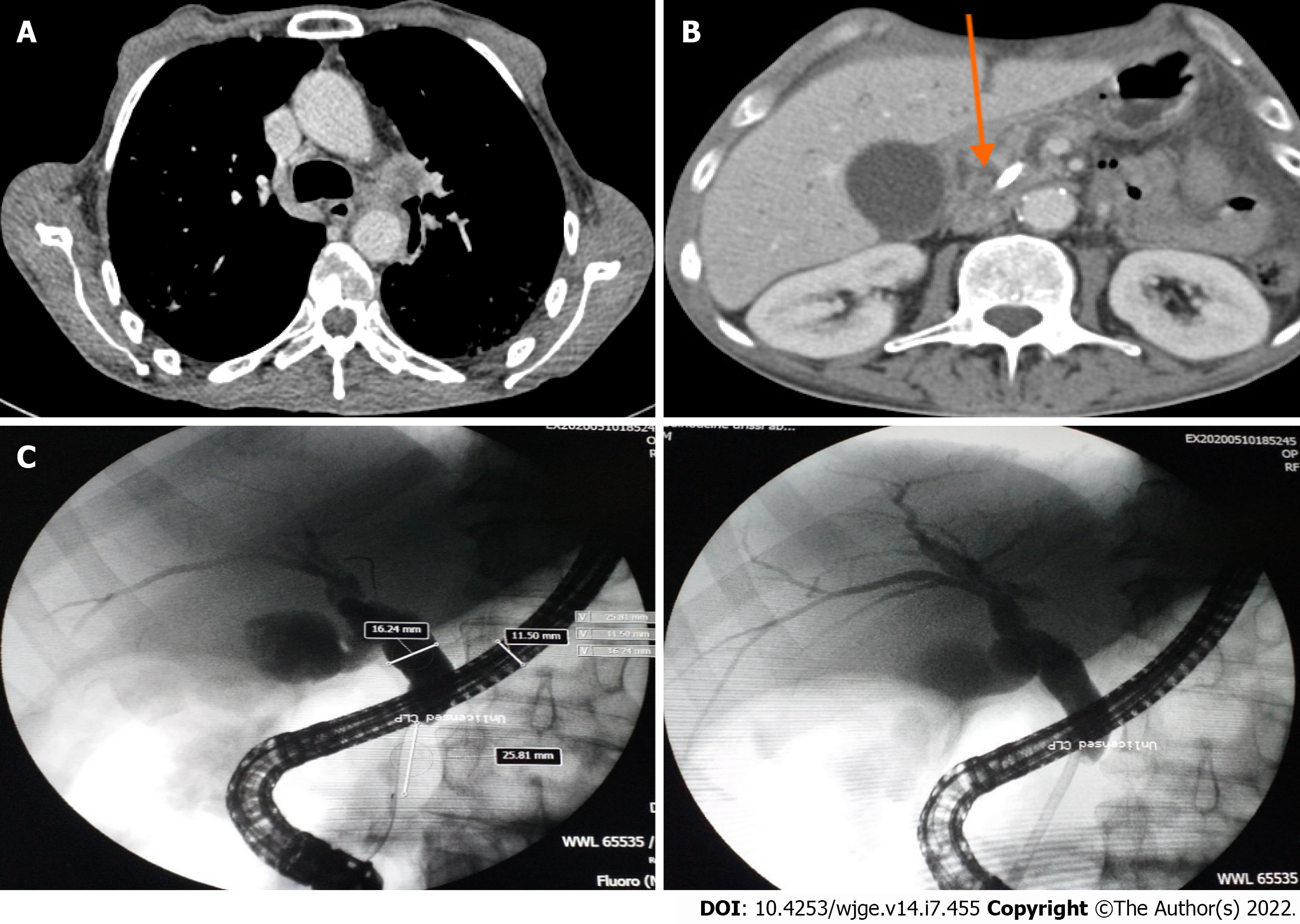 Figure 1 Imaging and endoscopic images of lung cancer and pancreatic mass. A: Computed tomography scan of the left hilar mass (arrow); B: Computed tomography scan of the mass on the head of the pancreas measuring 4.0 cm × 3.8 cm (arrow); C: Microscopic images showed dilatation of the main bile duct upstream of a very tight stenosis of the cystic duct at 25 mm with insertion of a plastic biliary stent.
Endoscopic examinations

The patient received carboplatin and 80 mg/m2 paclitaxel every week; however, the treatment was stopped at the 4th week due to poor therapeutic tolerance.

Over the 4-d period after treatment cessation, the patient developed total aphagia associated with dysphonia. He also developed stage 4 New York Heart Association dyspnea and was deemed to be undernourished (nutritional risk index of 64). His performance status was 3. A computed tomography arterial portography scan showed a locally advanced left hilar mass invading the left main bronchus and fistulating into a paraseptal formation with intimate contact within the esophageal wall (Figure 2A). The imaging examination also showed left lobar broncho-alveolitis and a cephalic pancreatic tumor invading the second duodenum and the antropyloric portion with dilation of upstream biliary ducts and no pneumobilia. Esophagogastroduodenoscopy showed a tracheoesophageal fistula located 30 cm from the dental arches that easily crossed (Figure 2B). A biliary stent was observed to partially migrate into the duodenum. EUS showed a 4-cm cephalic pancreatic mass invading the second portion of the duodenum (Figure 3A). Fine-needle (22-G) aspiration of the pancreatic mass was performed and confirmed the presence of a carcinomatous proliferation containing nests and large tumoral polygonal cells with atypical voluminous irregular nuclei surrounded by eosinophils. Focal tumoral necrosis was also present, leading us to conclude that the mass was a well-differentiated keratinizing squamous cell carcinoma. Immunohistochemical examination of the mass showed expression of cytokeratin 5/6 (Figure 3B). On the other hand, the cells did not express TTF1. The final histological report confirmed a poorly differentiated squamous cell lung carcinoma located in the pancreas. To address the migrated biliary stent and to ensure definitive and permanent biliary drainage before treating the tracheoesophageal fistula, endoscopic retrograde cholangiopancreatography was performed first with placement of an uncovered metallic stent measuring 10 cm/10 mm (Figure 4A). 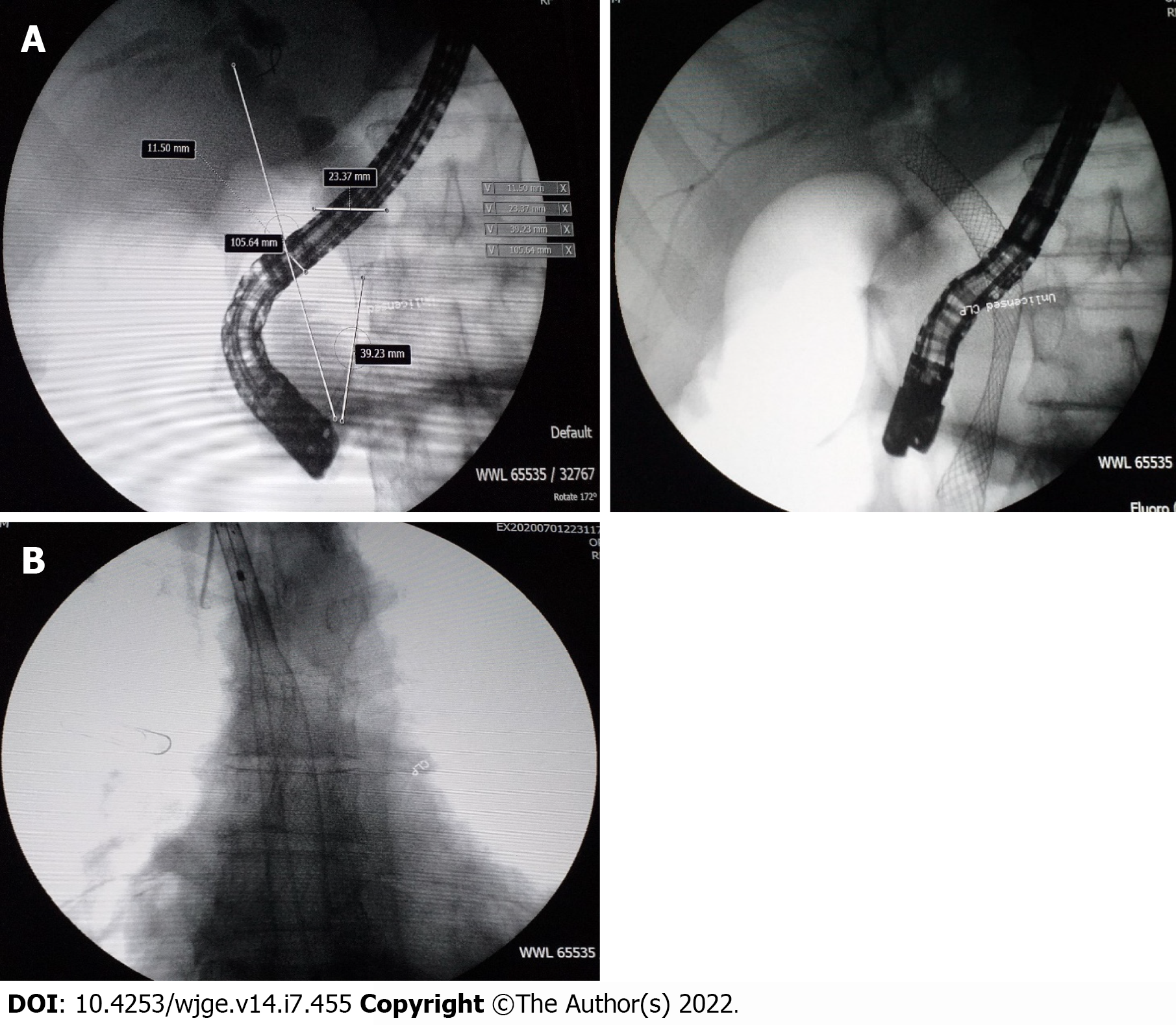 The patient’s case was rediscussed in multidisciplinary consultation meetings. The decision was made to retain the diagnosis, and a treatment plan was formulated accordingly (detailed below).

A fully covered metallic esophageal stent was placed as a palliative treatment for the tracheoesophageal fistula. Then, a 12-cm stent was placed, the proximal end of which was 24 cm from the dental arches (Figure 4B).

During the following 3 mo, the patient was able to gradually start oral alimentation of a mixed-food diet. However, he lost 5 kg of body weight, and his general state was significantly altered. Thus, palliative chemotherapy was not initiated. Two months later, imaging monitoring using thoracic and abdominal X-rays showed a good position of the esophageal and biliary stents (Figure 5A and 5B), which was confirmed by upper digestive endoscopy (Figure 5C). The patient died 9 mo after the diagnosis. 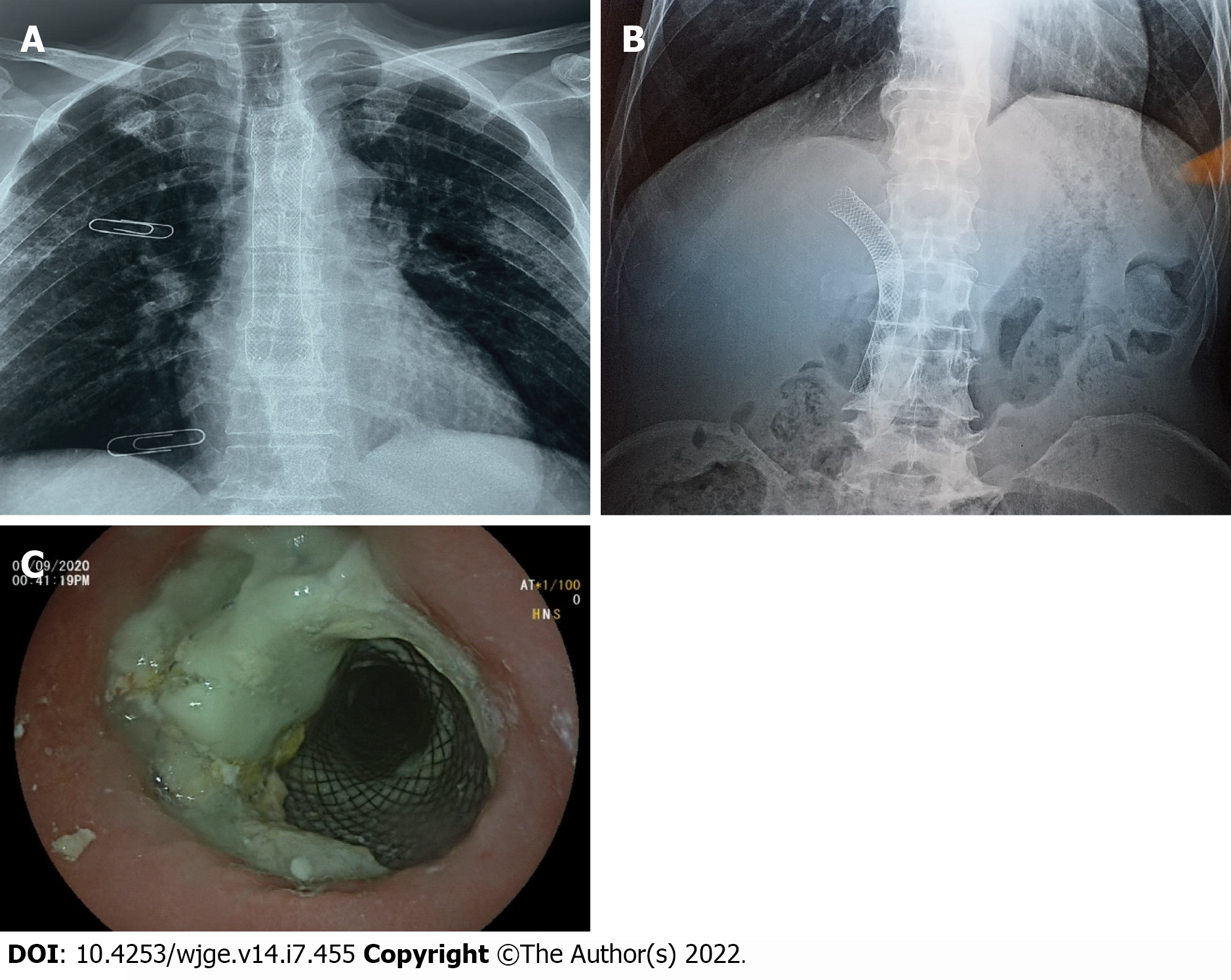 Figure 5 Chest X-ray and endoscopic images of stents position. A: Position of the esophageal prosthesis; B: Abdomen without preparation showed the position of the biliary metallic stent; C: Covered esophageal stent with food stasis.
DISCUSSION

References for this review were identified through searches of the PubMed, Cochrane and Scopus databases using the following Medical Subject Heading terms: (squamous cell lung carcinoma) AND (pancreatic metastasis). Only English-language journals were considered, and only full papers were included. A total of 201 studies were initially identified. After reviewing the abstracts, 14 articles were identified with topical relevance (i.e., pancreatic metastasis of a squamous cell lung carcinoma). Reference lists of the selected studies were checked (cross-referenced), but no additional studies were identified (Figure 6). We followed the Preferred Reporting Items for Systematic reviews and Meta-analysis guidelines for this literature review. Only 23 cases of squamous cell lung carcinoma with pancreatic metastasis were reported in the literature at the time of this review. The mean age of the reported patients was 61.5 years, and 92.3% of the patients were male. The most common symptom was jaundice (55.6%) followed by epigastric pain (44.6%). One patient (11.2%) was asymptomatic. Pancreatic metastasis was located in the head of the pancreas in 60% of the patients and was located equally in the body, tail and uncinated process in the remaining patients. EUS benefitted 50% of the patients. Among these patients, 3 patients underwent EUS with fine-needle aspiration (FNA), and 2 patients underwent EUS with fine-needle biopsy (Table 1). The diagnosis of pancreatic metastasis due to squamous cell lung carcinoma was established by EUS in 4 patients, by surgery in 3 patients, by percutaneous FNA of the pancreatic tumor in 1 patient, and upon autopsy in 4 patients. Three patients were treated with biliary drainage. Seven patients received chemotherapy. Two patients received surgical treatment for pancreatic metastasis. The follow-up period for reported patients varied between a few days and 1 year, with the latter noted for 1 patient who was treated with surgery and adjuvant chemotherapy[4](Table 1). 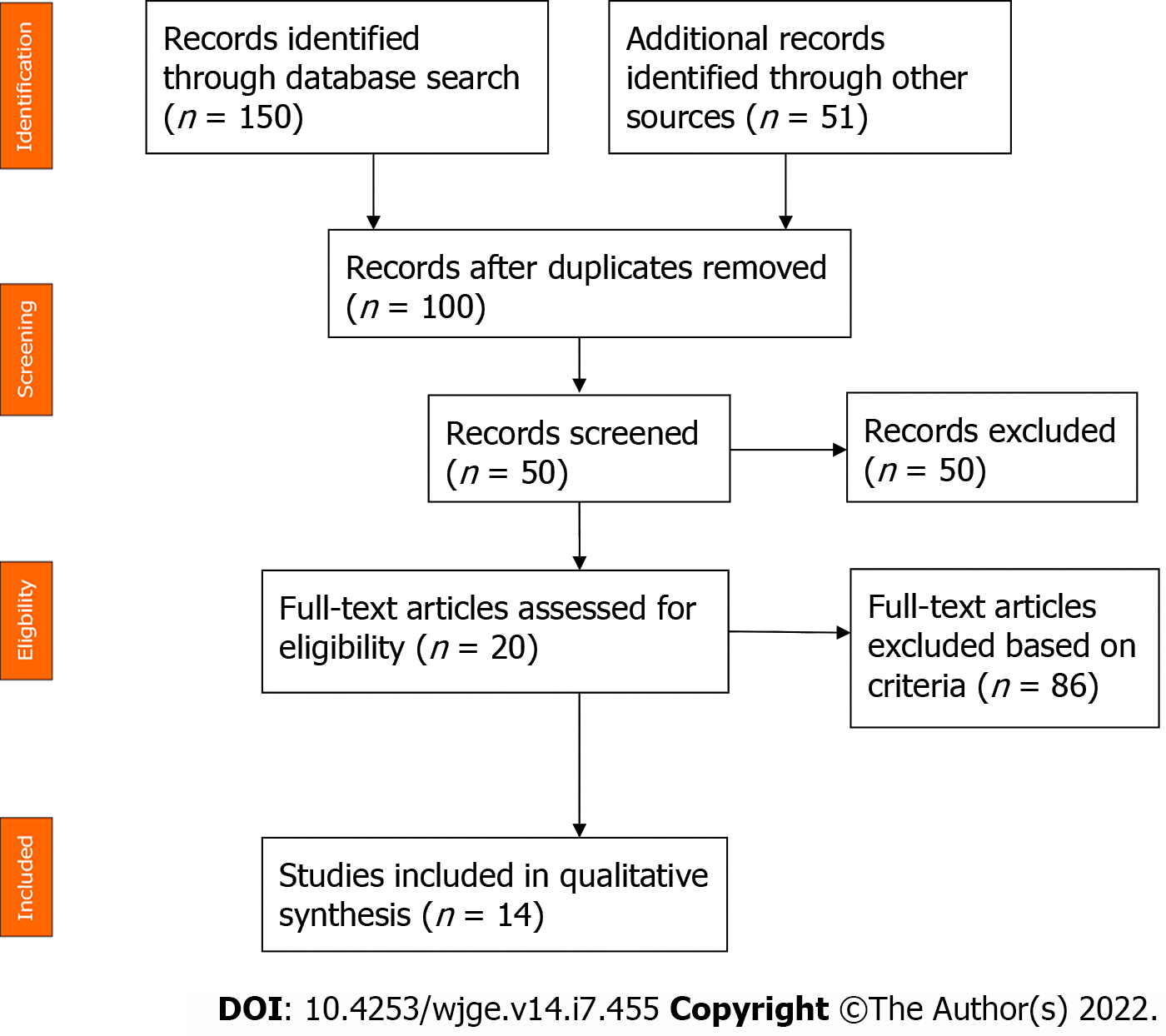 Squamous cell lung carcinoma with pancreatic metastasis is rare, and its diagnosis represents a challenge for clinicians. Radiological, endoscopic and anatomopathological methods are needed for an accurate diagnosis. EUS-FNA is the ideal procedure to diagnose pancreatic metastasis. This disease has a poor prognosis because it is generally detected at an advanced stage. Thus, the treatment is typically palliative.

I am grateful to all of those with whom I have had the pleasure to work during this and other related projects. Each of the members of Hepato-Gastroenterology Department has provided me extensive personal and professional guidance and taught me a great deal about both scientific research and life in general.