Ectopic pancreas is a rare developmental anomaly that results in a variety of clinical presentations. Patients with ectopic pancreas are mostly asymptomatic, and if symptomatic, symptoms are usually nonspecific and determined by the location of the lesion and the various complications arising from it. Ectopic pancreas at the ampulla of Vater (EPAV) is rare and typically diagnosed after highly morbid surgical procedures such as pancreaticoduodenectomy or ampullectomy. To our knowledge, we report the first case of confirmed EPAV with a minimally invasive intervention.

A 71-year-old male with coronary artery disease, presented to us with new-onset dyspepsia with imaging studies revealing a ‘double duct sign’ secondary to a small subepithelial ampullary lesion. His hematological and biochemical investigations were normal. His age, comorbidity, poor diagnostic accuracy of endoscopy, biopsies and imaging techniques for subepithelial ampullary lesions, and suspicion of malignancy made us acquire histological diagnosis before morbid surgical intervention. We performed balloon-catheter-assisted endoscopic snare papillectomy which aided us to achieve en bloc resection of the ampulla for histopathological diagnosis and staging. The patient’s post-procedure recovery was uneventful. The en bloc resected specimen revealed ectopic pancreatic tissue in the ampullary region. Thus, the benign histopathology avoided morbid surgical intervention in our patient. At 15 mo follow-up, the patient is asymptomatic.

EPAV is rare and remains challenging to diagnose. This rare entity should be included in the differential diagnosis of subepithelial ampullary lesions. Endoscopic en bloc resection of the papilla may play a vital role as a diagnostic and therapeutic option for preoperative histological diagnosis and staging to avoid morbid surgical procedures.

Core Tip: Ectopic pancreas at the ampulla of Vater (EPAV) is an extremely rare condition, usually mimicking malignancy and presents as abdominal pain and obstructive jaundice. This rare entity should be included in the differential diagnosis of subepithelial ampullary lesions. The diagnosis of EPAV remains very challenging despite several endoscopic and radiological advances. The diagnosis is usually based on morbid surgical interventions such as pancreaticoduodenectomy/ampullectomy or autopsy. Endoscopic en bloc resection of the papilla with endoscopic snare papillectomy may play a vital role as a diagnostic and therapeutic option for preoperative histological diagnosis and staging to avoid morbid surgical procedures.

Ectopic or heterotopic pancreas is a rare developmental anomaly with an estimated frequency of 0.6% to 13.7% at autopsy. It is mostly an incidental finding in the upper gastrointestinal tract, the most typical sites being the stomach (25%-38%), duodenum (17%-36%), and jejunum (15%-21.7%). It has been noted occasionally in the esophagus, gallbladder, common bile duct (CBD), spleen, mesentery, mediastinum and fallopian tubes[1,2]. The clinical manifestations of ectopic pancreas are usually nonspecific and are determined by the location of the lesion and the various complications arising from it.

Ectopic pancreas at the ampulla of Vater (EPAV) is extremely rare and usually presents as obstructive jaundice or abdominal pain, and hence, mimicking ampullary malignancy. Despite several advances in endoscopic and radiological techniques, the diagnosis of EPAV remains challenging and is mostly identified post-surgery or at autopsy.

A 71-year old male presented in the outpatient department in August 2019 with the chief complaint of epigastric pain of 3 mo duration.

The epigastric pain was mild to moderate, localized, continuous, with no relation to meals. There was no relief with proton pump inhibitors. There was no history of jaundice, pruritus, clay-colored stools, anorexia, weight loss, dysphagia, gastrointestinal bleeding or vomiting.

The patient had undergone coronary angioplasty for coronary artery disease in 2010 and was on dual antiplatelet drugs.

He had no addictions, and his family history was non-contributory.

The patient was conscious and oriented. His pulse rate was 80 bpm and regular, and blood pressure was 110/70 mmHg. There was no pallor, icterus, or lymphadenopathy. Abdominal examination and other systemic examinations did not reveal any abnormalities.

At the local medical center, he had undergone ultrasonography of the abdomen that revealed dilatation of the CBD (15 mm) and pancreatic duct (PD) (5 mm). He was referred to our center for further management. Abdominal magnetic resonance imaging and magnetic resonance cholangiopancreatography (MRCP) showed dilated CBD (15 mm) and PD (6 mm) with abrupt cut-off at the level of the ampulla. No other abnormalities were noted (Figure 1). Endoscopic ultrasonography (EUS) revealed a subepithelial, hypoechoic mass lesion at the ampulla 7 mm in size, causing upstream dilation of the CBD and PD. The lesion was free from duodenal muscularis propria. There was no regional lymphadenopathy. 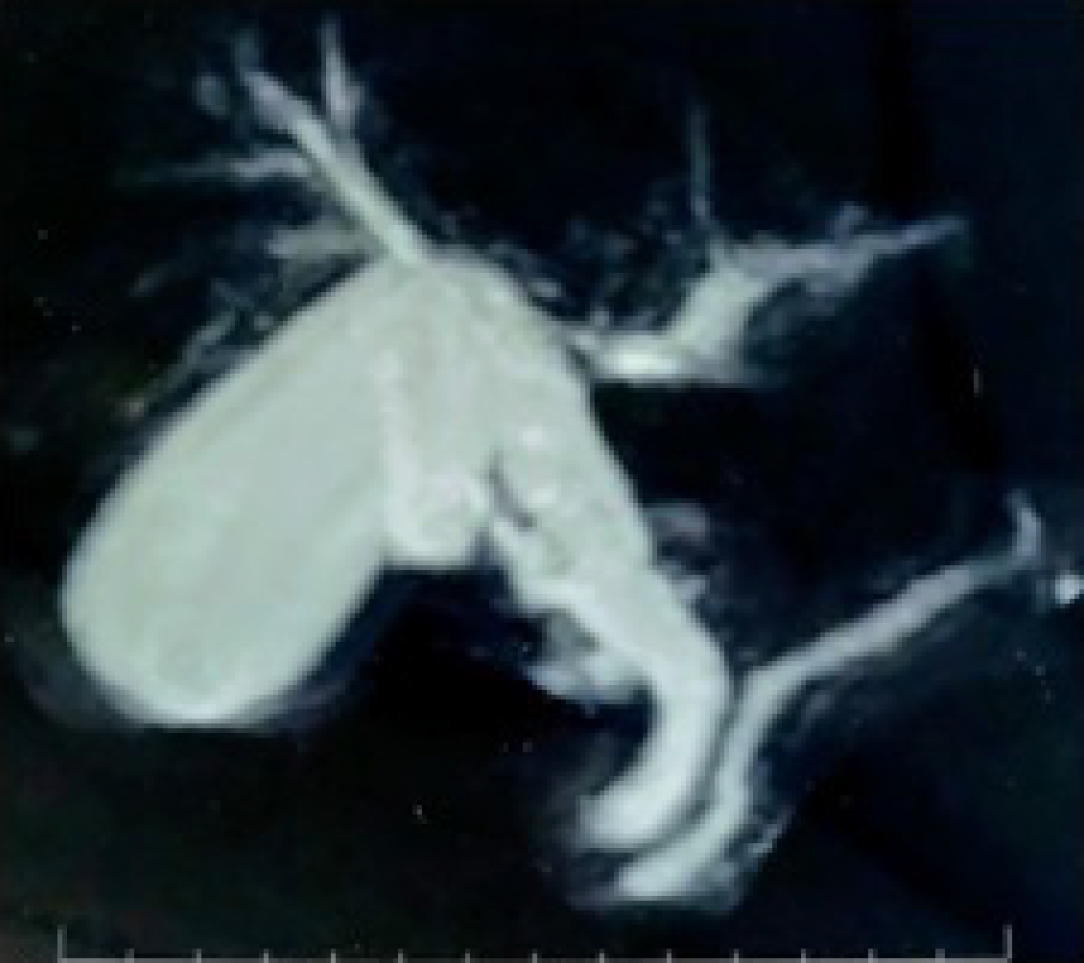 The age and comorbidity of the patient, the limitations and diagnostic accuracy of endoscopy, biopsies and imaging for ampullary lesions, and suspicion of malignancy made us acquire the histological diagnosis of ampullary lesion before a highly morbid surgical intervention. EUS-guided biopsy was not possible due to technical difficulties of the tiny mobile lesion. Hence, ESP was considered a diagnostic and therapeutic intervention for the subepithelial ampullary lesion. ESP aids in achieving en bloc resection of the ampulla for histopathological diagnosis and staging. Thus, en bloc ESP was performed with a balloon-catheter-assisted technique as described by Aiura et al[3]. ESP was carried out with a therapeutic duodenoscope (TJF Q 180V, Olympus Medical Systems Corp., Tokyo, Japan) with a 4.2 mm diameter accessory channel. Selective CBD cannulation was achieved with a 0.035” guidewire using a sphincterotome. The linked stone extraction balloon catheter (Fusion Quattro Extraction Balloon, Wilson Cook Medical Inc., Winston-Salem NC, USA) and a 5 Fr snare were inserted over the guidewire through the accessory channel side by side. The balloon catheter alone was advanced into the bile duct, and then the balloon was expanded with distilled water mixed with contrast. The balloon was pulled back gently towards the duodenal lumen, at which point the snare was opened so that it grasped the base of the papilla next to the inflated balloon. Pulling the balloon catheter toward the duodenal lumen made it easier to snare the papillary lesion entirely by lifting the papilla from the duodenal wall and towards the lumen[3]. En bloc papillectomy was performed with a monopolar electrosurgical current (ERBE Vio3, Endocut Q mode). A 5 Fr X 7 cm single pigtail pancreatic plastic stent was placed prophylactically, and a 10 Fr X 10 cm biliary plastic stent was placed after biliary sphincterotomy (Figure 2). 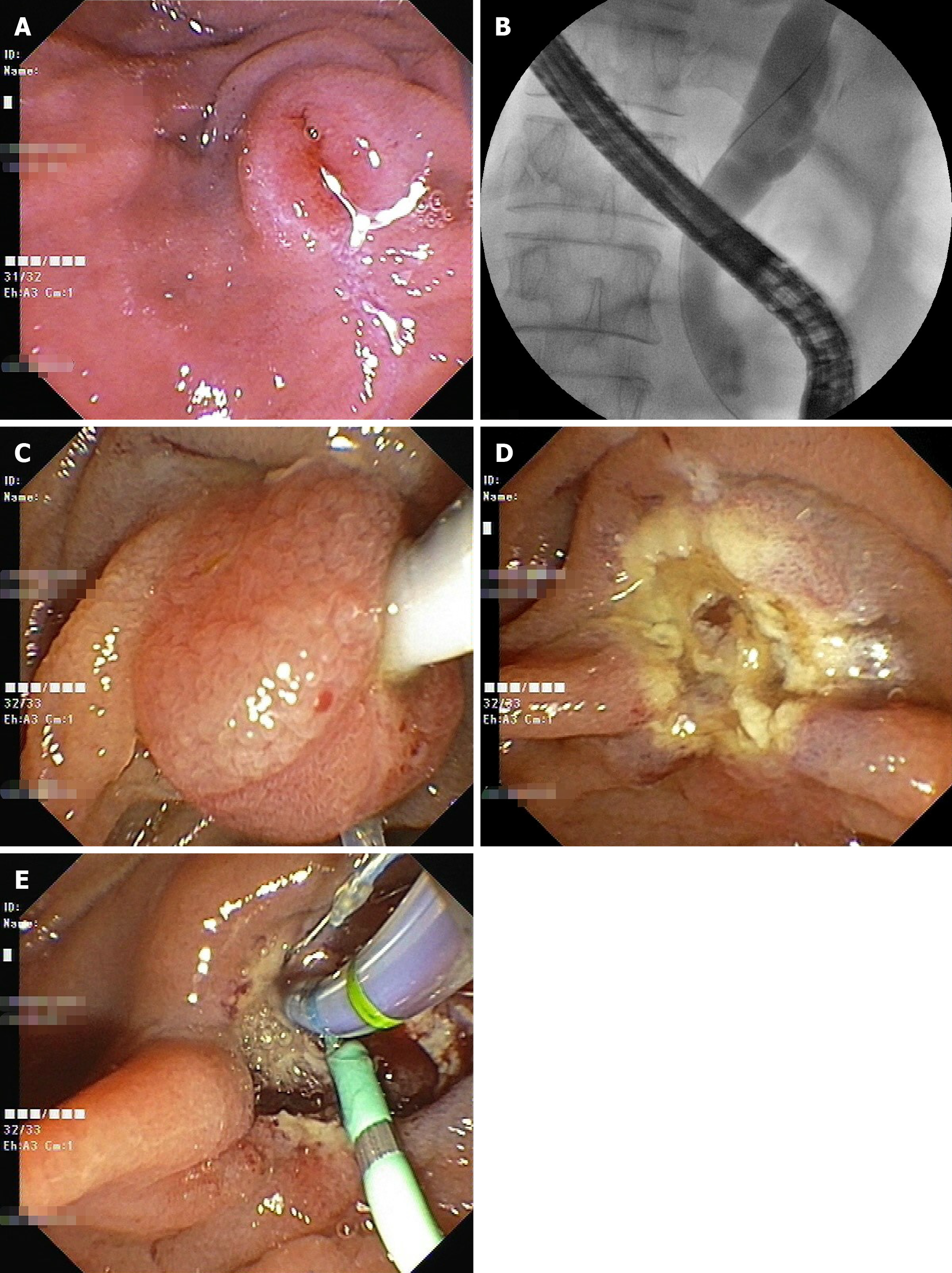 Histopathological examination of the retrieved specimen showed ampullary-type mucosa with the central area of erosion associated with mild acute on chronic inflammation in the lamina propria. There was a lobular arrangement of normal looking exocrine pancreatic tissue on the deeper aspect of the lamina propria consistent with the ectopic pancreatic tissue (Gasper Fuentes Classification - Type III) (Figure 3). Thus, the final diagnosis in the presented case was EPAV. 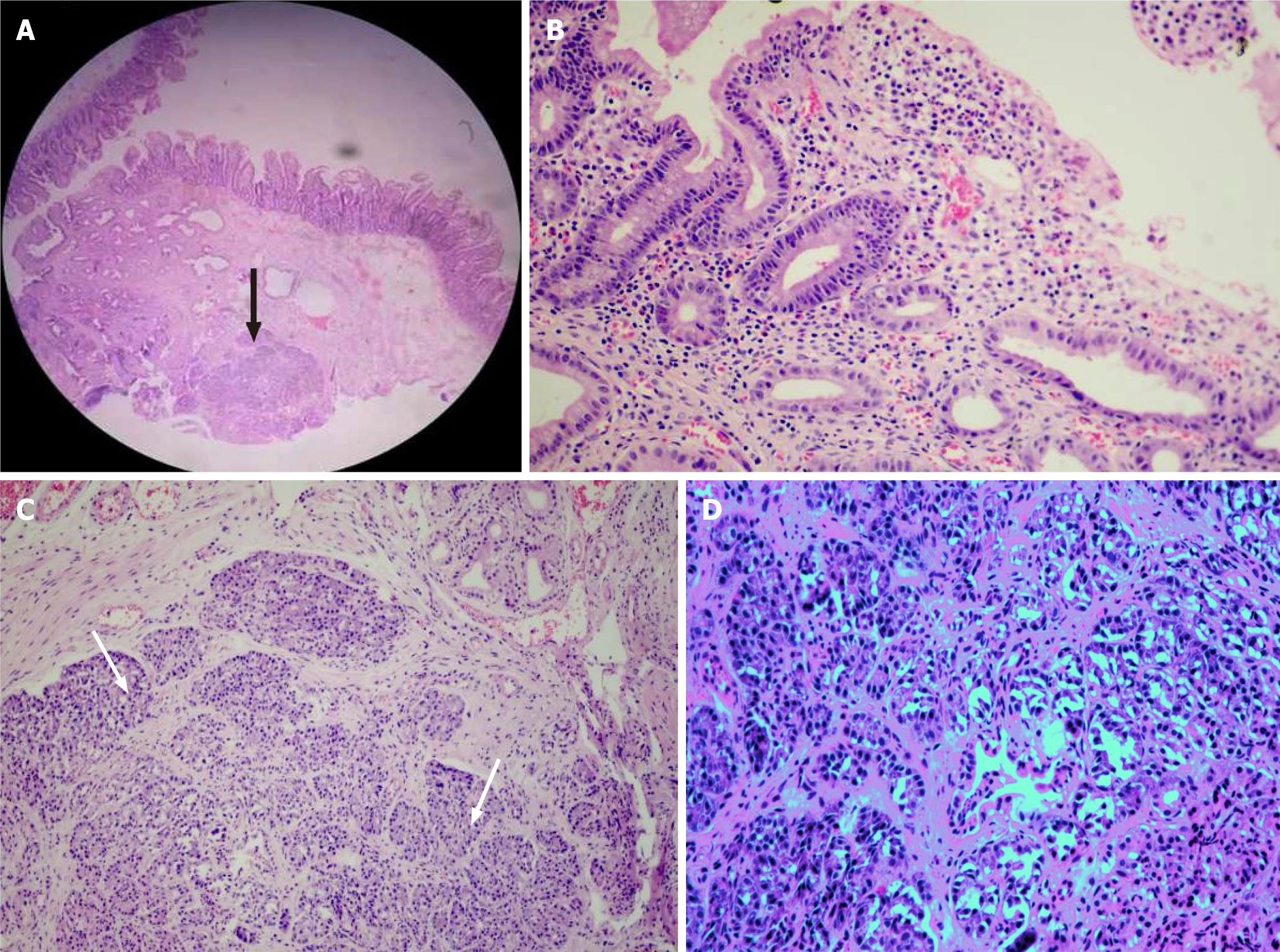 Post-procedure recovery was uneventful. Both stents were removed after ten days. The patient was asymptomatic at the 15 mo follow-up.

Ectopic pancreas is an uncommon developmental anomaly where pancreatic tissue has grown outside its usual location and shows no vascular or anatomical connections to the pancreas. The prevalence of ectopic pancreas is estimated to range from 0.6% to 13.7% of autopsies. It is mostly identified as an incidental finding within the upper gastrointestinal tract, the most typical sites being the stomach (25%-38%), duodenum (17%-36%), and jejunum (15%-21.7%)[1]. Ectopic pancreas is found in all age groups, with most cases in the 4th to 6th decade of life with a male preponderance (male:female ratio is 3:1).

EPAV is an infrequent entity presenting with clinical symptoms in the form of jaundice or abdominal pain. We found only 43 cases of EPAV (excluding bile duct ectopic pancreatic tissue) after an extensive literature search (Table 2)[7-31]. The most extensive series was fourteen cases by Vankemmel and Houcke[12] in 1977. They found these cases after undertaking a systematic study with multiple sections of the region of the ampulla of Vater in a total of 50 pancreaticoduodenectomies (49 – chronic pancreatitis; 1 – benign ampullary tumor). The age of the 43 cases of EPAV ranged from 32 years to 72 years with almost equal sex distribution. The most common symptoms were jaundice and abdominal pain. Eighty-two percent of cases revealed some degree of biliary dilatation, but it was shown that jaundice did not correlate with the size of the lesion. The size of the tumor ranged from 1 mm to 40 mm. The precise mechanism of CBD obstruction by ectopic pancreas is not known but may be due to mechanical obstruction (pressure by ectopic pancreatic tissue or surrounding tissue edema) or functional obstruction (spasm due to irritative secretions).

The important differential diagnoses for an ampullary lesion in addition to adenomatous lesions are neuroendocrine tumors, adenomyomas, gangliocytic paraganglioma, duodenal duplication cyst, inflammatory pseudotumor and infrequently ectopic pancreas[32-34]. Despite several advances in endoscopic and radiological techniques, the diagnosis of EPAV remains challenging. The unique finding of central umbilication on endoscopy is seldom seen at the ampulla of Vater. An endoscopic biopsy is unhelpful due to the subepithelial nature of the lesion. Radiological techniques such as CT scan and MRCP do not appear to be useful for preoperative diagnosis. Although very few cases had been subjected to EUS according to the previously reported cases, EUS appears to assist in determining the dimensions, layer of origin, adherence to the muscularis propria of the ampullary lesion and any regional lymphadenopathy. EUS-guided fine needle aspiration may help to clarify the diagnosis[35].

ESP is a minimally invasive technique that helps achieve en bloc resection of the ampulla for accurate preoperative histology and thus avoids morbid surgical procedures. ESP is a safe procedure that has low morbidity and mortality rates (9.7%–20% and 0.09%–0.3%, respectively)[36]. Lesions less than 5 cm, with no evidence of intraductal growth and no evidence of malignancy on endoscopic appearance (spontaneous bleeding, ulceration) are considered suitable for ESP. However, with advances in endoscopic techniques and armamentarium, the indications are expanding[37]. ESP can provide accurate histology and grading, tumor and lymphovascular invasion staging in cases of malignancy. There are plenty of debatable issues such as the use of submucosal injection, cautery current settings, and the use of prophylactic pancreatic stents etc., in ESP. However, ESP seems to be a feasible and safe modality to achieve en bloc resection of ampullary lesions for accurate histology after pre-procedure work up in expert hands.

Our patient presented with new-onset dyspepsia with a ‘double duct sign’ on imaging, giving rise to the suspicion of ampullary malignancy. The age and comorbidity of the patient, the limitations and diagnostic accuracy of endoscopy, biopsies and imaging for ampullary lesions, and suspicion of malignancy made us acquire the histological diagnosis of ampullary lesion before considering a highly morbid surgical intervention. Hence, we carried out endoscopic en bloc resection of the subepithelial ampullary lesion using a balloon-catheter-assisted ESP. The benign histopathology of the resected specimen avoided morbid surgical intervention in our case.

To our knowledge, this is the first reported case of EPAV managed with minimally invasive ESP.

EPAV mimicking malignancy with a ‘double duct sign’ is an extremely rare condition. The diagnosis remains challenging even with advances in endoscopic and radiological techniques. Hence, the diagnosis rests totally on morbid surgical interventions or autopsy. This rare entity should be included in the differential diagnosis of subepithelial ampullary lesions. ESP which helps to achieve en bloc resection of the ampulla may play a vital role as a diagnostic and therapeutic option for preoperative histological diagnosis and staging to avoid morbid surgical procedures.

The authors are thankful to Dr. Manish Gaikwad, Dr. Jayesh Timane and Dr. Amol Samarth for their help in writing the manuscript.