Recently, with the advent of more advanced devices and endoscopic techniques, endoscopic retrograde cholangiopancreatography (ERCP) in Billroth II (B-II) patients has been increasingly performed. However, the procedures are difficult, and the techniques and strategies have not been defined.

To reveal the appropriate scope for ERCP in B-II patients.

Compared to CS, EGDS shortened the procedural time of ERCP in B-II patients.

Core tip: This study aimed to reveal the appropriate scope for endoscopic retrograde cholangiopancreatography (ERCP) in Billroth II (B-II) patients. Sixty ERCP procedures were performed in B-II patients, and in 44 cases, this was the first ERCP procedure performed by esophagogastroduodenoscopy (EGDS) or colonoscopy (CS) after B-II gastrectomy. The procedural time was significantly shorter in the EGDS group than in the CS group. CS was an independent factor of a longer ERCP procedural time according to the univariate and multivariate analyses. Compared to CS, EGDS shortened the procedural time of ERCP in B-II patients.

In the past, percutaneous cholangiography or biliary drainage was mainly performed in patients who underwent gastrectomy or intestinal reconstructive surgery[1]. Recently, with the advent of more advanced devices and endoscopic techniques, endoscopic cholangiography and biliary drainage have been increasingly performed in these patients. Although endoscopic retrograde cholangiopancreatography (ERCP) in Billroth II (B-II) patients has been previously reported[2-19], the procedures are difficult, and the techniques and strategies have not been defined.

This study was a retrospective study to investigate the appropriate scope for ERCP in B-II patients. This study was approved by the Institutional Review Board of Fukushima Medical University.

Sixty ERCP procedures were performed in B-II patients between June 2005 and May 2018 at Fukushima Medical University Hospital (Figure 1). Among these cases, 44 involved ERCP by EGDS or colonoscopy (CS) after B-II gastrectomy. Sixteen cases were excluded from this study because in these cases, this was not the first ERCP performed by EGDS or CS. Five cases involved ERCP by both EGDS and CS. The 44 patients were divided into two groups: 17 cases of ERCP by EGDS (EGDS group) and 27 cases of ERCP by CS (CS group). Patients were not required to provide informed consent for this study because this investigation used anonymous clinical data obtained after each patient had agreed to examination or treatment by written consent. For full disclosure, see the details of this study published on the home page of Fukushima Medical University. 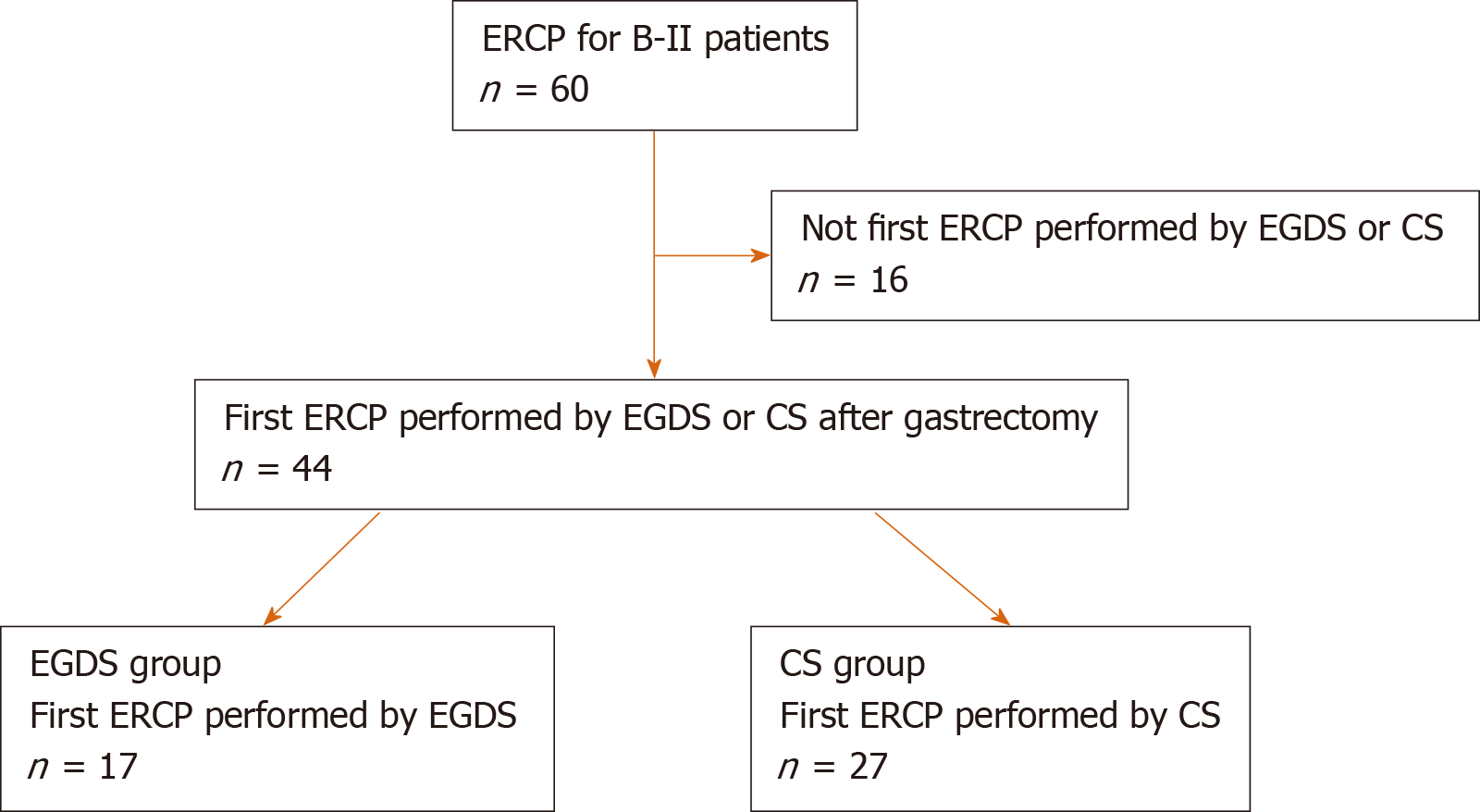 Before ERCP was started, patients were intravenously administered 300 mg of gabexate mesylate. After the patients were sedated with midazolam under blood pressure and oxygen saturation monitoring, an endoscope with a cap attached to the tip was inserted. The endoscope used was randomly chosen by each endoscopist. After the entrance of both the afferent loop and the efferent loop was observed, the endoscope was advanced to the afferent loop, reaching the papilla of Vater. Insertion into the afferent loop was performed with confirmation of the running direction by X-ray images. In the EGDS group, cannulation was initiated after the papilla was turned to the 9 to 11 o’clock position (Figure 2A). In the CS group, cannulation was initiated after the papilla was turned to the 6 o’clock position (Figure 3A and B). In patients with biliary or pancreatic ductal strictures, a biliary stent was inserted after endoscopic sphincterotomy (EST). 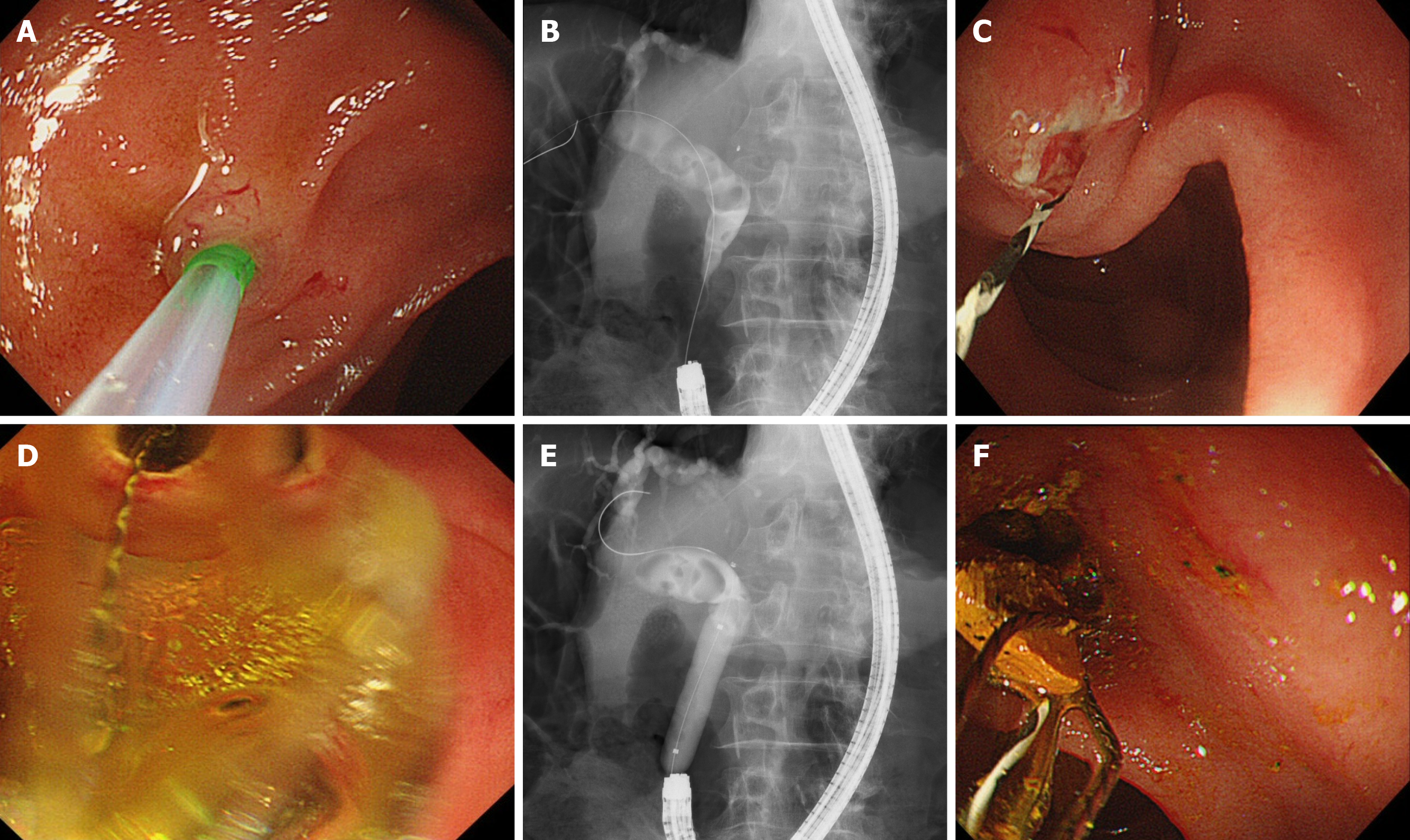 Figure 2 A case from the esophagogastroduodenoscopy group. A: After the papilla was positioned at 11 o’clock, biliary cannulation was performed; B: Common bile duct stones were confirmed by cholangiography; C, D and E: Endoscopic sphincterotomy and endoscopic papillary large balloon dilation were performed; F: Common bile duct stones were removed. 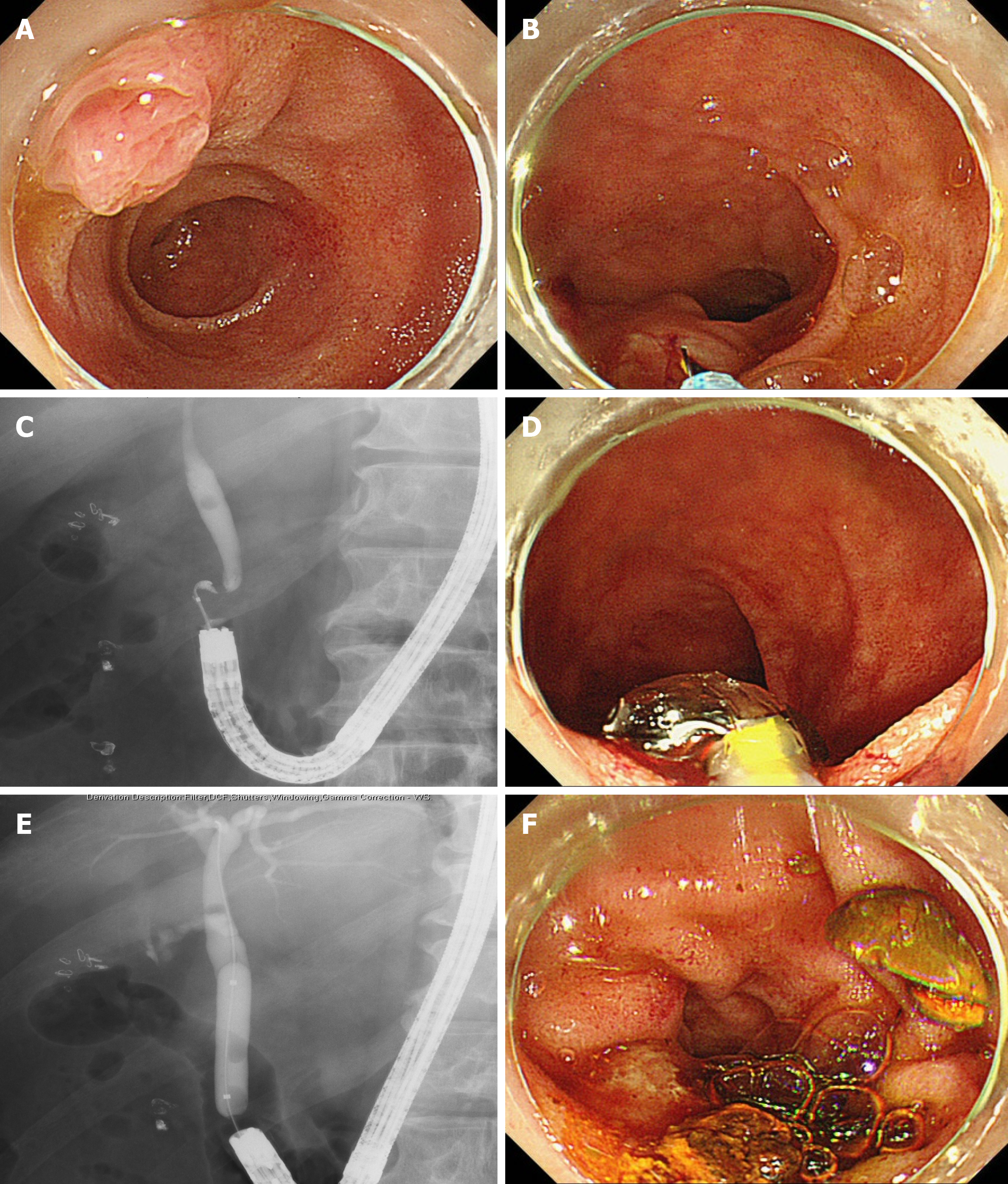 The characteristics of the patients (age, sex, period after B-II reconstruction, diseases treated with B-II reconstruction, untreated papilla of Vater, antithrombotic drug use, periampullary diverticulum, diseases, transverse diameter of the largest stone, and number of stones) and ERCP procedure details [EST, EPBD or EPLBD, procedural time, papilla of Vater access, stone clearance, stone destruction, procedural success, and post-ERCP pancreatitis (PEP)] were compared between the EGDS and CS groups. Additionally, the relationship between the duodenal and catheter directions (cross or parallel) and the observation of papilla of Vater in the front were compared as factors of scope usability between the EGDS and CS groups (Figure 4). The duodenal and catheter directions were determined from the X-ray images of the biliary cannulation. An untreated papilla of Vater was defined as one that had not undergone incision or dilation. If all biliary stones were removed, the intended procedures (for example, biliary duct or pancreatic duct investigation or stenting) were performed using the first endoscope, and this was defined as stone clearance or procedural success. The diagnosis of PEP was performed according to Cotton’s criteria[23]. If patients were observed to have an elevated serum amylase level more than three times the normal upper limit with abdominal pain at more than 24 h after ERCP, they were diagnosed with PEP. Furthermore, peripancreatic inflammation was confirmed in all PEP cases by contrast-enhanced CT. 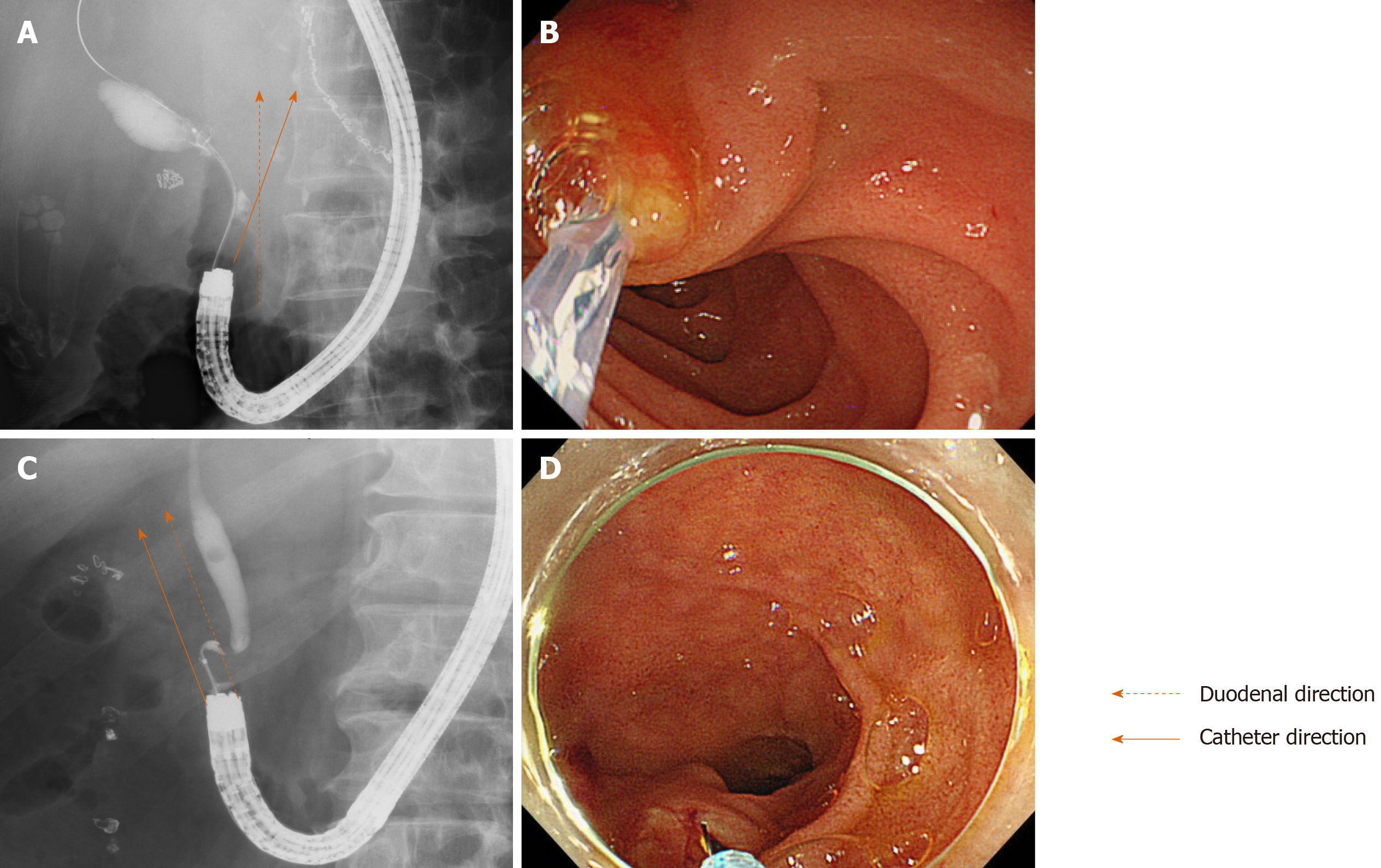 Age, period after B-II reconstruction, and transverse diameter of the largest stone were compared by Student’s t test. The procedural time and number of stones were compared using the Mann-Whitney U test. Nominal variables were compared by Fisher’s exact test. Factors influencing the ERCP procedural time were investigated by logistic regression analysis. A P value < 0.05 was defined as statistically significant. All statistical analyses were performed using the EZR platform (Saitama Medical Center, Jichi Medical University, Saitama, Japan), which is a graphical user interface for R (The R Foundation for Statistical Computing, Vienna, Austria). EZR is a modified version of the R commander, which was designed to perform functions that are frequently used in biostatistics[24].

CS was an independent factor of a longer ERCP procedural time, as determined by univariate and multivariate analyses (Table 3).

In this study, EGDS was compared with CS for performing ERCP in B-II patients. The results showed that compared to CS, EGDS shortened the ERCP procedural time.

An increasing number of ERCP procedures after gastrectomy have been performed in patients who have undergone B-II reconstruction, and several scopes have been used. As mentioned in the introduction, the side-viewing endoscope was initially used for ERCP in B-II patients[2,3]. However, recently, forward-viewing endoscopes have been used. Byun et al[9], Park et al[12], Ki et al[17], and Jang et al[15] used an esophagogastroduodenoscope. However, Abdelhafez et al[19] used a colonoscope, and Itoi et al[7] and Kawamura et al[16] used a single-balloon enteroscope. Lin et al[8] used a double-balloon endoscope. Although it is unknown which scope is most efficient, the esophagogastroduodenoscope was reported to shorten the procedural time. In most reports, the procedural time was not described. However, a study reported that the average EGDS procedural time was 36.3 min[15], which is a short time. EGDS was superior to procedures with a longer scope because the papilla of Vater can be observed in the front (Figures 2A, 3A, 3B, 4A, 4B, 4E, 5A, and 5B) because the esophagogastroduodenoscope can be curved up to 210 degrees, while a colonoscope can be curved up to 180 degrees. The duodenal direction and the catheter direction could easily be crossed in ERCP using EGDS (Figure 4 and Table 4). However, these two directions tended to run parallel in ERCP using CS. In fact, in three cases, it was difficult to cannulate the bile duct by CS, whereas bile duct cannulation was successful by EGDS (Figure 5).

Figure 5 A case of treatment that was not successful by colonoscopy was successful by esophagogastroduodenoscopy. A: Cannulation to the papilla of Vater was not achieved because the papilla was difficult to observe in the front by colonoscopy; B: The papilla was observed in front by esophagogastroduodenoscopy, and cannulation was achieved; C: A common bile duct stricture caused by pancreatic cancer was observed by cholangiography; and D: A biliary stent was inserted.

Interestingly, although the procedural success rate was not significantly different between the two groups, the procedural time was shorter in the EGDS group. For patients who have undergone B-II reconstruction, the radiation exposure dose is decreased with EGDS. The exposure dose is also lower for the medical staff, who can thus perform more ERCP procedures. As such, EGDS is the first choice for ERCP in patients who have undergone B-II reconstruction.

There are several limitations to this study. First, this study was a retrospective and small study, and it was performed at a single institute. In the future, prospective and multicenter studies are needed. Second, due to the retrospective nature of this study, ERCP procedures were not performed by specified endoscopists. However, ERCP was performed by pancreaticobiliary specialists who had experience performing at least 2000 ERCP procedures or by trainees under the guidance of these specialists. Therefore, the quality of the ERCP procedure was constant. Third, the exact cannulation time was not recorded. However, as described above, the scope was chosen randomly. Additionally, the patient characteristics, diameter or number of stones, and factors related to ERCP were not significantly different between the two groups. Therefore, if EGDS is used for ERCP in B-II patients, the duration of the whole procedure, including insertion and cannulation, could be shortened.

Compared to a longer scope, the esophagogastroduodenoscope shortened the procedural time of ERCP for patients who had undergone B-II reconstruction.

Recently, with the advent of more advanced devices and endoscopic techniques, endoscopic retrograde cholangiopancreatography (ERCP) in Billroth II (B-II) patients has been increasingly performed. However, the procedures are difficult, and the techniques and strategies have not been defined.

To reveal the appropriate scope for ERCP in B-II patients.

Compared with CS, EGDS shortened the procedural time of ERCP for patients who had undergone B-II reconstruction.

The results in this study could contribute to choosing an ERCP scope for patients who have undergone B-II reconstruction.