The present armamentarium of endoscopic hemostatic therapy for non-variceal upper gastrointestinal hemorrhage includes injection, electrocautery and clips. There are newer endoscopic options such as hemostatic sprays, endoscopic suturing and modifications of current options including coagulation forceps and over-the-scope clips. Peptic hemorrhage is the most prevalent type of nonvariceal upper gastrointestinal hemorrhage and traditional endoscopic interventions have demonstrated significant hemostasis success. However, the hemostatic success rate is less for other entities such as Dieulafoy’s lesions and bleeding from malignant lesions. Novel innovations such as endoscopic submucosal dissection and peroral endoscopic myotomy has spawned a need for dependable hemostasis. Gastric antral vascular ectasias are associated with chronic gastrointestinal bleeding and usually treated by standard argon plasma coagulation (APC), but newer modalities such as radiofrequency ablation, banding, cryotherapy and hybrid APC have been utilized as well. We will opine on whether the newer hemostatic modalities have generated success when traditional modalities fail and should any of these modalities be routinely available in the endoscopic toolbox.

Core tip: New devices are available for hemostasis of non-variceal upper gastrointestinal hemorrhage that may supplement or supplant traditional modalities. These devices however have a varying track record in hemostasis with different learning curves, costs and detriments.

Non-variceal upper gastrointestinal hemorrhage is prevalent and associated with significant morbidity and mortality. The most common cause of non-variceal upper gastrointestinal hemorrhage (NVUGIH) is peptic hemorrhage but there is a broad range of other pathologies including Dieulafoy lesions, Mallory-Weiss tears, malignant lesions, vascular ectasias and iatrogenic causes. Prompt endoscopy for diagnosis and potential hemostasis usually results in a favorable outcome. However, refractory or recurrent bleeding can occur with standard medical management and possible endoscopic intervention in up to 13% of patients, often necessitating other interventions such as interventional radiology or surgery[1]. Novel endoscopic interventions such as endoscopic submucosal dissection (ESD) and peroral endoscopic myotomy (POEM) have a particular penchant to potentially have a wide area for bleeding and impingement of adjacent vascular structures[2]. Gastric antral vascular ectasias (GAVE) can result in chronic and occasionally acute gastrointestinal blood loss and this entity is readily treated by argon plasma coagulation (APC) but newer modalities have also demonstrated efficacy[3]. We will discuss the experience to date with these new interventions and discuss whether they should be routinely available.

The over-the-scope clip (OTSC) (Ovesco Endoscopy, Tubingin Ger) has demonstrated efficacy in closing perforations and hemostasis[4]. This clip has proved itself capable in achieving hemostasis (> 90%) both as rescue and first line therapy for peptic and Dieulafoy’s lesions[5,6]. It is particularly useful for lesions with a large visible, fibrotic base and bleeding sites not easily treated by devices passed through the accessory channel[7]. Validating series have included Dieulafoy’s and Mallory-Weiss lesions but most are peptic lesions[5,6,8]. Though multiple clip placement has been described, good endoscopic visualization and precise placement of the clip is paramount as these clips are very difficult to remove. There is limited hemostatic experience for another OTSC-the Padlock Clip (Aponos Medical Kingston, NH)[9]. Overall, the experience of OTSC’s for NVUGIH has been impressive (Figure 1). 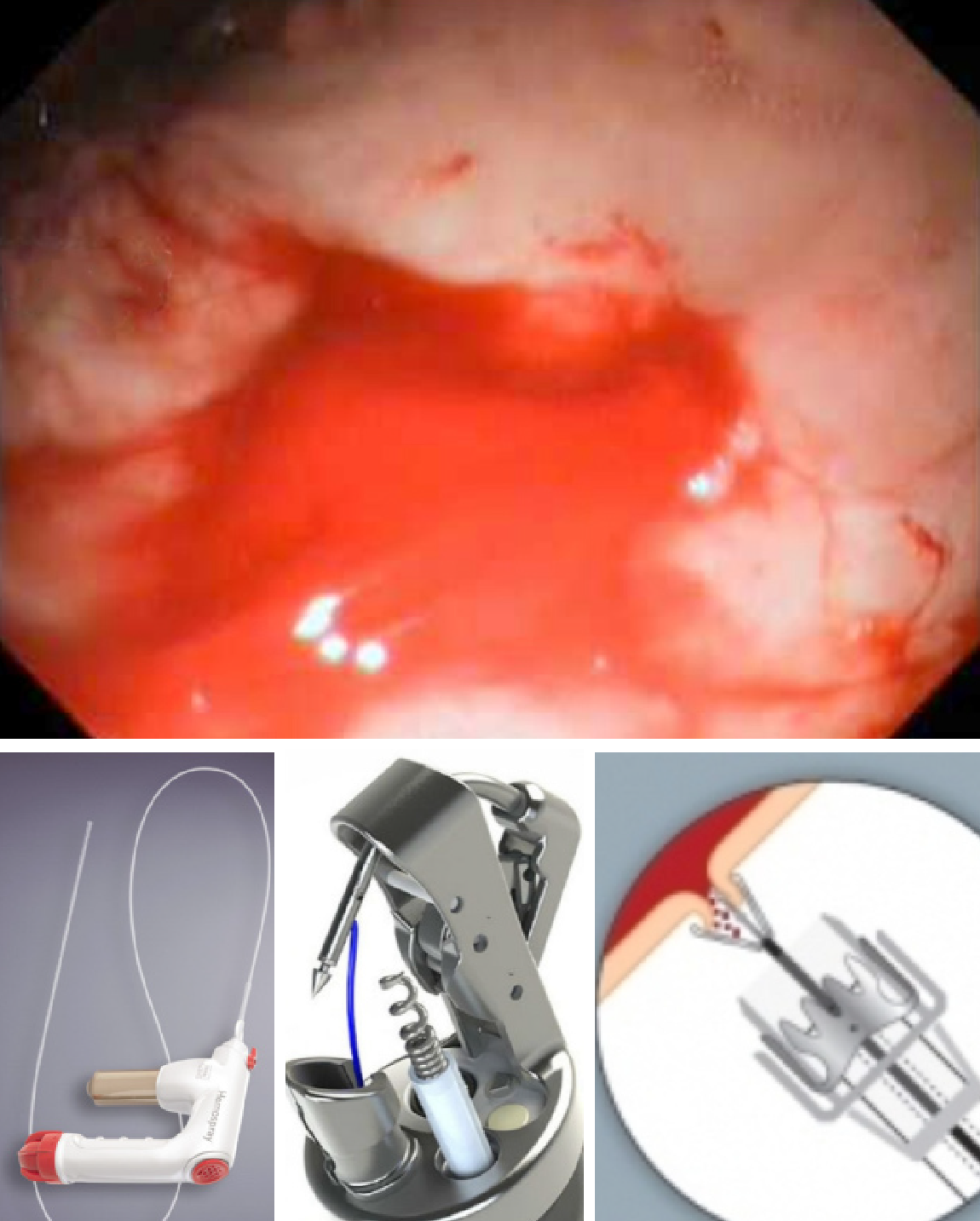 A recent multicenter series of 10 patients with refractory peptic hemorrhage were all successfully treated with the Apollo endoscopic suturing system (Apollo Endosurgery Austin Tx) and no rebleeding was noted[10]. This device has been useful in mini-mizing chronic blood loss from marginal and anastomosis ulcers[11]. Endoscopic suturing after endoscopic mucosal resection and ESD is an attractive option, but studies to date have not specifically addressed hemostasis[12].

Hemospray (Cook Medical, Winston-Salem, NC) is a nonabsorbable powder that becomes adhesive and cohesive when hydrated. Unlike cautery and clips, it does not treat the underlying bleeding lesion. Sixty-three patients compiled from a registry with NVUGIH (half ulcer-related) were treated with Hemospray[13]. Fifty-five were only treated with Hemospray and 8 were treated as a salvage intervention when traditional therapy failed. The monotherapy group had 85% primary hemostasis with 15% rebleed at 7 d. The salvage therapy group had 100% primary hemostasis and 25% rebleed at 7 d[13]. This and other work supported use in NVUGIH including peptic lesions, Mallory-Weiss tears and anastomosis ulcers. A small randomized comparison study of NVUGIH demonstrated therapeutic equivalency between clips and Hemospray when each was combined with epinephrine[14]. The topical hemostasis niche is likely to become crowded as several new products are being evaluated[15].

The literature contains a plethora of miscellaneous interventions reflecting the innovative vision of endoscopists. Endoscopic banding for ulcers has largely been abandoned but occasionally banding can be used for other lesions such as a Dieulafoy’s[16]. Detachable snares in concert with clips have been used for NVUGIH[17]. Metal stents have been used for esophageal NVUGIH and post-sphincterotomy bleeding[18,19]. Some centers tout the usefulness of EUS-guided therapy and vascular (doppler) probes to assess arteries[20,21].

Most operators performing ESD and potentially extraluminal procedures such as POEM desire a monopolar device with precise clasping and coaptive ability such as the Coagrasper (Olympus Endoscopy, Center Valley Pa)[22]. ESD defects are often not practically closed by clips and Hemospray, suturing and fibrin glue have been employed though none is standard. Polyglycolic shields adhered by fibrin glue have been proposed as method to minimize post-ESD bleeding but results regarding this are mixed[23,24].

Endoscopic banding appears comparable to APC-the current standard- in treating GAVE[25]. It may be di-fficult to band after APC due to fibrosis however. Radiofrequency ablation (RFA) has also been well validated for GAVE hemostasis[26]. Cryotherapy and hybrid APC had been evaluated[27,28]. Multiple other modalities have also been utilized for GAVE (Table 1).

The decision of which of the newer modalities to have available for endoscopic hemostasis depends on track record of hemostatic success, respective ease-of-use (largely related to prior experience and/or training), cross- utilization and cost. The OTSC’s fare quite well with these criteria in that the Ovesco clip has been well validated as a hemostatic instrument, only moderately challenging to use even with limited experience, utilized in high-volume units for perforation/fistula closure and relatively inexpensive. Hemospray also fares well in that it has a limited but positive record regarding hemostasis, and is exceptionally easy to use. It is moderately expensive and has no cross-utilization however. The Apollo suturing device is not expensive, but has a moderately steep learning curve and its use for ulcer hemostasis would likely be infrequent. RFA has a moderate record in GAVE treatment and easy to use but it is expensive and should only be available if it is also used for Barrett’s ablation. Endoscopic banding is cheap and variceal experience can be extrapolated to NVUGIH hemostasis. However, it has a sparse record in hemostasis. Experienced ESD operators will likely have a monopolar device which would be compatible with their cautery unit. The issue of tissue shields after ESD is intriguing, but it will likely be years before a formal recommendation could be made.