Over-the-scope clip-assisted endoscopic full thickness resection (eFTR) of subepithelial tumors is a novel and promising endoscopic technique. Recently, there have been prospective studies investigating its use for colonic masses, but data regarding its use and efficacy in the duodenum are limited to a few reports.

A 65-year-old African American female presents for evaluation of persistent gastroesophageal reflux disease not responsive to medical treatment. A 1 cm nodule was incidentally found in the duodenum and biopsies revealed a low grade well differentiated neuroendocrine tumor. The nodule was removed using over-the-scope clip-assisted eFTR and pathology revealed clear margins. We review the available literature with a discussion on the efficacy and safety of clip-assisted eFTR s of subepithelial lesions in the duodenum.

Core tip: Over-the-scope clip-assisted endoscopic full thickness resection (eFTR) of subepithelial tumors is a novel endoscopic technique, but has not been extensively studied in duodenal tumors. We present a case of a duodenal carcinoid tumor resected with clip-assisted eFTR that was complicated by bleeding. We explore the safety and efficacy of this procedure in light of the available literature.

Endoscopic full thickness resection (eFTR) is a promising endoscopic procedure useful for resection of masses arising from any layer of the gastrointestinal wall, particularly for subepithelial tumors. Increasingly, eFTR is being used with the assistance of over the scope (OTS) clips such as the OTSC® (OVESCO Endoscopy AG, Tübingen, Germany) and more recently, the Padlock Clip (Padlock Pro-Select®, Aponos Medical Corporation, Kingston NH, United States). Traditionally, endoscopic resection of duodenal lesions was via endoscopic mucosal resection (EMR) or endoscopic submucosal dissection (ESD), procedures which are technically challenging and associated with significant adverse events such as bleeding and perforation. However, several reports have demonstrated the efficacy of OTS clip-assisted eFTR. We report on a case of carcinoid tumor in the duodenum that was resected with an OTSC clip that was complicated by bleeding, and discuss the efficacy and safety of duodenal OTS clip-assisted eFTR in light of the available literature.

She had a medical history of a hiatal hernia, GERD and a benign peptic stricture. The patient was not on anticoagulation, antiplatelet agents or non-steroidal antiinflammatory drugs.

There was no personal or family history of gastrointestinal cancer.

Physical examination was unremarkable and revealed a comfortable lady without any abdominal tenderness on examination.

An esophagogastroduodenoscopy (EGD) was performed which revealed a normal esophagus and mild gastritis in the antrum. A single large subepithelial nodule was found in the duodenal bulb and was biopsied. 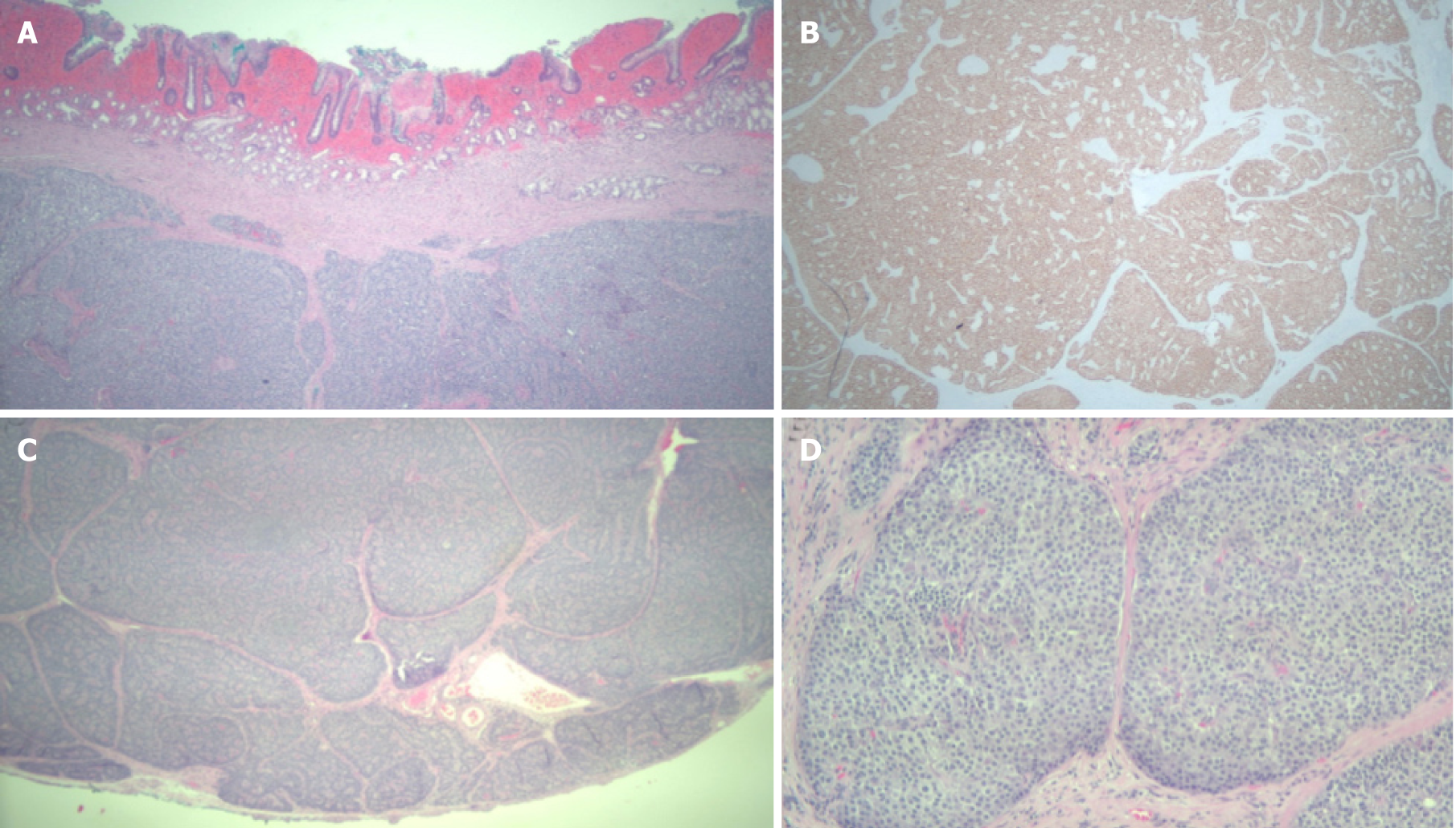 During endoscopy an approximately 1 cm subepithelial mass was seen (Figure 2) which was felt to be very superficial given the mucosal biopsies positive for carcinoid tumor on her previous endoscopy. The endoscope was mounted with the OTSC, the lesion was suctioned into the cap slowly and the clip was deployed at the base of the nodule leading to serosa-to serosa apposition, mimicking a pseudo-polyp with the nodule above the closed clip. The nodule was subsequently resected en bloc using electrocautery with a flexible 13 mm snare resecting the tissue above the clip. Despite the presence of the OTSC, the patient started bleeding profusely with active spurting of blood, which was quickly controlled with a hot forceps biopsy. The mass was successfully removed. 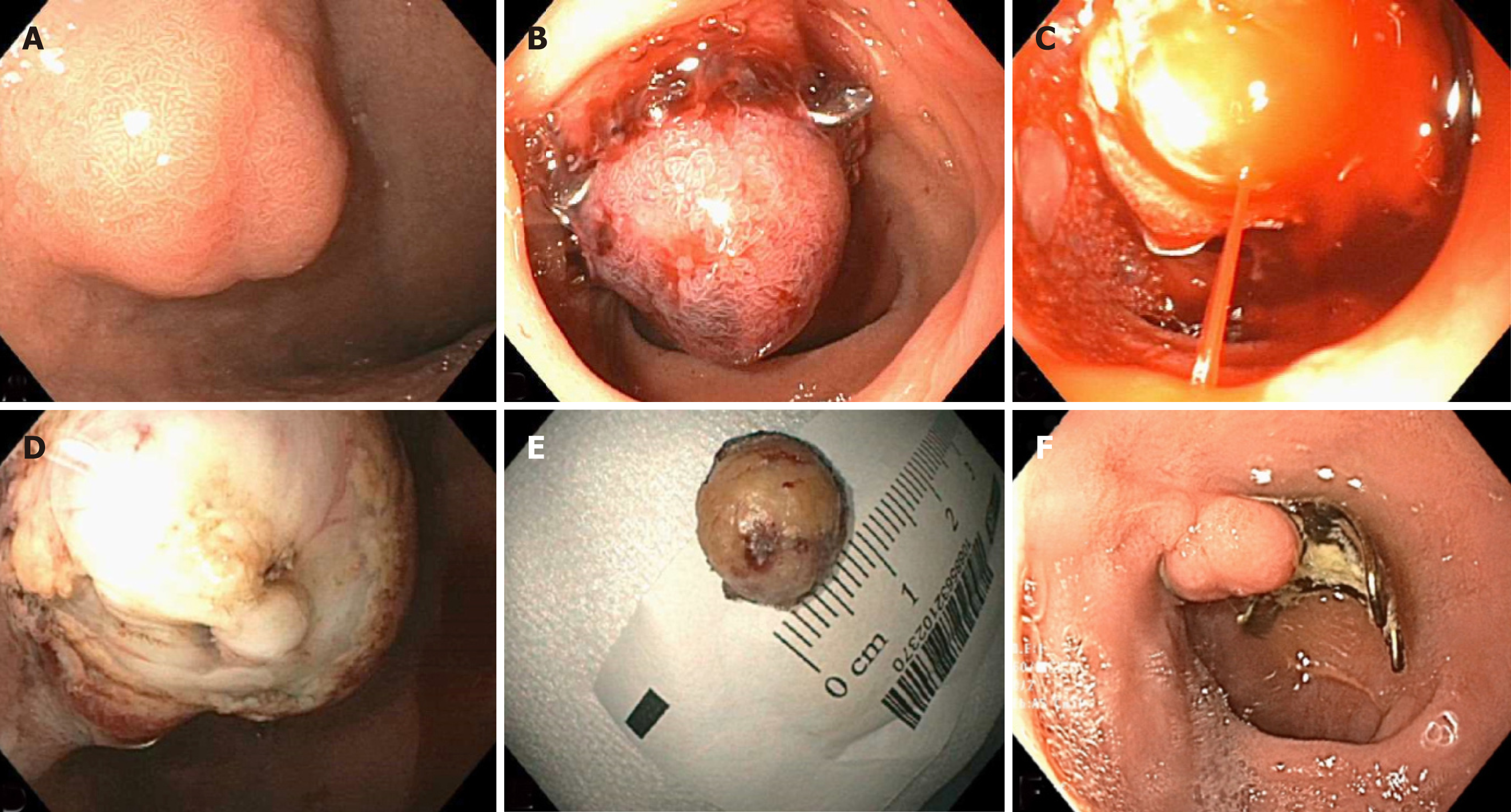 Figure 2 Endoscopic view of duodenal lesion. A: Duodenal nodule prior to intervention; B: Pseudopolyp lesion after deployment of over the scope clip; C: Arterial spurting of blood from the lesion during resection; D: Post-resection defect; E: En bloc resected specimen; F: Follow up upper endoscopy revealing over the scope (OVESCO®) clip, scar and granulation tissue.
OUTCOME AND FOLLOW-UP

Pathologic examination revealed a 9 mm submucosal WDNET with clear margins (R0). Immunohistochemistry confirmed an intermediate grade tumor (G2 with a Ki67 index of 3.5%). There was no lympho-vascular or perineural invasion identified. A subsequent follow up EGD two months later revealed the OTSC in place with hyperplastic mucosa protruding through the clip. Multiple biopsies were taken with no evidence of neuroendocrine tumor cells.

The optimal treatment for subepithelial tumors of the duodenum remains controversial, and the overall data on the safety of endoscopic resection of small bowel carcinoids are limited[1]. If duodenal carcinoids are isolated lesions < 10 mm in size, are low grade, do not infiltrate the muscularis and do not show angioinvasion, EMR is considered by many to be the treatment of choice as they have a very low risk of metastasis, between 6%-10%[2,3]. Current Consensus Guidelines recommend endoscopic removal for small duodenal SET < 10 mm, and consideration of surgical resection for tumors > 20 mm[4]. Tumors between 10 mm-20 mm can be removed either endoscopically or surgically since the risk of metastases noticeably increases when tumor size is ≥ 2 cm[2], and the approach is currently not standardized[4]. However, surgical techniques for duodenal SET resection usually results in a Whipple’s procedure or the more complex pylorus preserving pancreaticoduodenectomy, both associated with significant morbidity and mortality[5]. Endoscopic resection of tumors in the duodenum is usually achieved by EMR or ESD, which is controversial in the duodenum due to the high incidence of adverse events and technical difficulty[6]. Although ESD achieves a greater en bloc resection rate compared to a complete resection (R0) of only 50% with EMR, EMR is preferred over ESD since the risk of perforation is greater than 30% with ESD[5]. The duodenum has a thin wall compared to other parts of the gastrointestinal tract rendering it more prone to perforation. Furthermore, the base of post-ESD ulcer is continually exposed to bile and pancreatic enzymes leading to an increase in delayed perforation[6]. The duodenum is narrow, which along with its C-loop makes endoscopic procedures technically challenging. It has abundant blood vessels in the submucosal layer making it more prone to bleeding[7], in part from the electrosurgical snaring which may cause deep coagulation necrosis and damage[7] with a risk of delayed bleeding of 12%[8]. Furthermore, many lesions cannot be lifted due to scarring from pre-procedural biopsy sampling[9], rendering resection of non-lifting SET arising from layers deeper than the submucosa extremely challenging[1-3,8,10].

Over the past several years eFTR, an endoscopic method allowing for full thickness resection has been described. The benefits of using eFTR over EMR and ESD include the ability to resect the entire lesion and achieve R0; avoiding immediate and delayed perforation and bleeding by placement of the OTS clip; and avoiding the technical difficulty of ESD in the duodenum.

There are two types of eFTR, “free-hand” or “exposed” eFTR where full thickness excision is carried out using usual ESD techniques and the GI wall defect is subsequently closed, typically via endoscopic wall suturing; and device assisted (i.e., OTS clip-assisted) eFTR where an endoscopic clip is first deployed after which the full thickness excision is carried out[11]. Recently, there has been increasing interest in over the clip assisted eFTR. It has successfully been used in the stomach for gastric epithelial lesions[12], as well as lesions in the colon[13], particularly after the approval of a dedicated full thickness resection device (FTRD®; OVESCO Endoscopy AG, Tübingen, Germany) for lower gastrointestinal use[14,15]. However, as of now there are only a handful of reports describing clip-assisted eFTR of duodenal lesions (Table 1)[8,13,16-19]. In our review, out of all cases of duodenal OTC clip-assisted eFTR, 85% achieved R0 resection (17/20). In comparison, one series of eFTR of colonic masses demonstrated an R0 of 76.9% of cases[15]. The majority of cases used a curved clip, the OTSC mounted on a flexible endoscope, similar to what was used in our patient. In these cases, the authors reported R0 in 8/10 of all cases, and technical success in all. There were no reported side effects, including bleeding. One study by Schmidt et al attempted to perform duodenal nodule resections using the new FTRD that was approved for lower gastrointestinal tumors[8]. The authors reported only two episodes of minor bleeding and an R0 in 3/4 of the patients. Most recently, Kappelle et al[5] published a case series of 6 patients with SET where they attempted to perform device assisted eFTR with a new flat clip (Padlock Pro-Select®, Aponos Medical Corporation, Kingston NH, United States). Of the 6 patients, 4 of them had micro-perforation or perforation, and one had significant gastrointestinal hemorrhage, although R0 was achieved in all[5].

In our case although we used the OTSC, there was a spurting arterial bleed during the resection which was quickly controlled with a hot biopsy forceps. Although OTSC is commonly used to stop bleeding and has been used as first line and salvage therapy in gastric and duodenal ulcers[20,21], the technical difficulties of endoscopic therapies in the duodenum remain, and endoscopists should keep in mind the anatomical considerations as well as the extensive blood supply in the duodenum and its proclivity for bleeding. However, in our opinion, despite the possibility of bleeding the use of OTSC before endoscopic resections appears to be a good option for duodenal SET, particularly given the high incidence of clinically significant bleeding with alternate techniques.

Based on the available data, clip assisted eFTR appears to be a safe and efficacious treatment approach to duodenal SET. Further prospective studies are needed to investigate the long-term utility and safety of clip-assisted eFTR in the management of subepithelial duodenal lesions, as well as the safety profile of different clips used.