We reviewed patients with GAVE who underwent treatment at University of Alabama at Birmingham between March 1, 2012 and December 31, 2016. Included patients had an endoscopic diagnosis of GAVE with associated upper gastrointestinal bleeding or iron deficiency anemia.

Seven out of 15 patients had classic watermelon description for GAVE, 1/15 with diffuse/honeycomb pattern and 6/15 with nodular GAVE per EGD description. Seven out of 15 patients required multimodal treatment. Four out of six of patients with endoscopically nodular GAVE required multimodal therapy. Overall, mean pre- and post-treatment hemoglobin (Hb) values were 8.2 ± 0.8 g/dL and 9.7 ± 1.6 g/dL, respectively (P ≤ 0.05). Mean number of packed red blood cells transfusions before and after treatment was 3.8 ± 4.3 and 1.2 ± 1.7 (P ≤ 0.05), respectively.

Core tip: Over the past several years, treatment for gastric antral vascular ectasia (GAVE) has continued to evolve and the number of available treatments has continued to increase. However, the optimal treatment of GAVE is currently unknown and there currently aren’t any studies comparing every modality. However, it is becoming apparent that patients with severe, diffuse or refractory disease require multimodal therapy. Our case series not only shows that but also that patients specifically with nodular variant GAVE require and respond well to multimodal therapy.

First described in 1953 by Rider et al[1], gastric antral vascular ectasia (GAVE) is now a well-recognized cause of chronic upper gastrointestinal bleeding (UGIB) accounting for 4% of non-variceal UGIB[2] and an important cause of chronic iron deficiency anemia. Endoscopically, GAVE can appear as organized red spots emanating radially from the pylorus (watermelon stomach), arranged in a diffuse manner (honeycomb stomach), or as nodules[3]. Histologically, GAVE appears as ectatic mucosal capillaries with fibrin thrombi, spindle cell formation and fibrohyalanosis[4]. Immunohistochemical staining for CD61, a platelet marker, further confirms a diagnosis of GAVE[5]. GAVE has been associated with cirrhosis, chronic kidney disease, diabetes mellitus, autoimmune diseases, hypothyroidism, bone marrow transplant and left ventricular assist devices[6-8]. Over the past two decades, many therapeutic options have been implemented for treatment of GAVE including surgical, medical and endoscopic therapies. Data is emerging on the resolution of GAVE following liver transplant in cirrhotics[9]. Endoscopic therapies have rapidly become the mainstays of first line therapy namely with argon plasma coagulation (APC) as the most common modality and more recently with radiofrequency ablation (RFA) using Halo90 catheter[9] and endoscopic band ligation (EBL) both of which have been shown to be safe and effective for GAVE treatment[10,11]. The latter two have been utilized in treatment of severe, diffuse, APC refractory GAVE[10,21]. Furthermore, there has been the advent of BARR χ Through The Scope technique (Covidien, TTS-1100) for RFA, which posits some advantages over the traditional Halo90 system. Despite these advances, the best therapeutic approach has yet to be defined. This case series describes patients who underwent treatment for GAVE with TTS-RFA alone or part of a multimodal approach incorporating other methods such as APC and EBL (Figure 1). We believe that the multimodal approach may be appropriate for certain subsets of patients, namely patients with severe nodular GAVE. 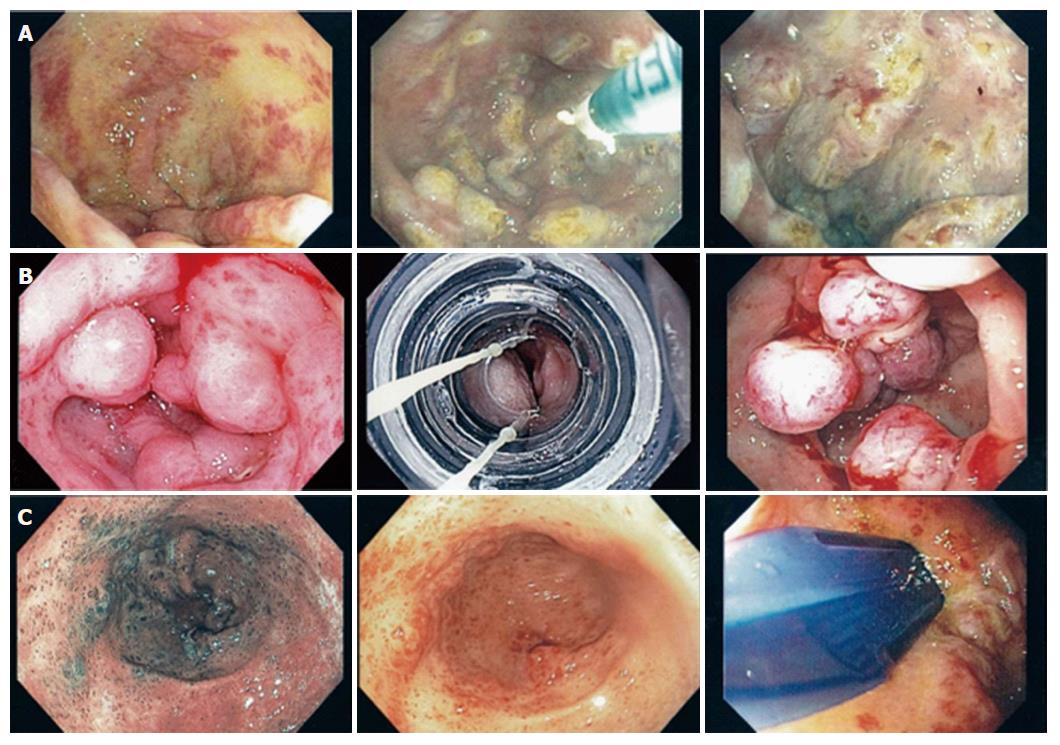 We reviewed patients with GAVE who underwent treatment at University of Alabama at Birmingham (UAB) between March 1, 2012 and December 31, 2016. Included patients had an endoscopic diagnosis of GAVE with associated UGIB or iron deficiency anemia. Medical history including demographic data and chronic medical conditions associated with GAVE were collected. Patients receiving transfusions for other issues outside of GAVE (i.e., for surgeries) were excluded.

The primary outcomes measured included number of packed red blood cells (pRBC) transfusions required and hemoglobin (Hb) concentrations 6 mo prior to and after initiation of treatment, either with TTS-RFA alone or multimodal therapy. In case of patients in the multimodal group, the same variables were collected 6 mo before and after initiation of an alternative modality (APC, EBL or TTS-RFA). Secondary outcome measures included adverse events, post-treatment adverse events, and number of hospitalizations at University of Alabama (UAB).

Informed consent was obtained from all patients prior to the procedure. All antiplatelet/anticoagulant therapy was discontinued prior to the procedure. High-resolution endoscopy was performed using white light endoscopy (Figure 2) as well as narrow band imaging. Focal ablation was performed using TTS-RFA catheter. The catheter, consisting of 15.7 mm × 7.5 mm transparent electrode array, was passed through the 2.8 mm working channel of the endoscope. The electrode was the placed in opposition of the GAVE lesions and two consecutive pulses of energy at settings 12-15 J/cm2, 40 W/cm2 were delivered. Circumferential ablation of antral lesions was achieved using the external rotatory function of the catheter (Video 1). Repeat endoscopies and RFA was performed at intervals of 6-8 wk until all lesions appeared healed. 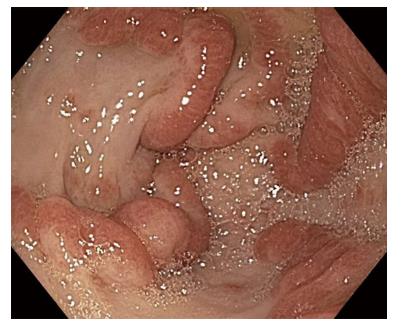 Frequencies (%) were used for categorical variables. For continuous variables, mean ± SD was used. Non-parametric, matched pairs, two-tailed Wilcoxon signed rank tests were used to assess differences in pRBC transfusions before and after treatment. Paired T test was used to compare pre and post treatment Hb concentrations. All the analysis were conducted with SAS 9.4 (Cary, NC, United States) and P < 0.05 was considered statistically significant. 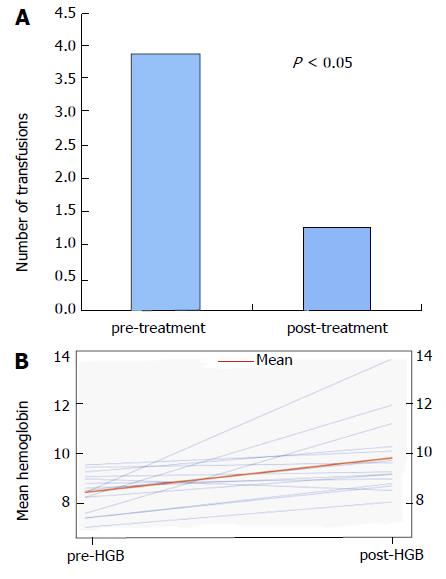 Figure 3 Number of transfusions (A) and mean hemoglobin (B) in 6-mo period pre- and post-treatment for gastric antral vascular ectasia. HGB: Hemoglobin.

GAVE is an important cause of chronic anemia[7]. Though, often asymptomatic and an incidental finding, it can lead to chronic transfusion dependence. Over the past several years, treatment for GAVE has continued to evolve as the number of available effective therapeutic interventions has increased. These included: YAG laser, APC, EBL, cryotherapy and surgical anterectomy (Figure 5)[10,13-15]. APC is most commonly used but has been associated with sepsis, post-APC bleeding, gastric outlet obstruction and increased incidence of hyperplastic polyps[16-18]. Recently, the BARR x Halo90 system (Covidien, Sunnyvale, CA, United States), which mounts on to the tip of the standard endoscope, has been successfully used for treatment of GAVE[19,20]. Given the fixed positioning of the electrode, the Halo90 catheter requires removal of the endoscope for rotation of the electrode for exact apposition to the mucosa. Repeated intubations are cumbersome and can increase the risk of adverse events, including gastroesophageal junction laceration[21]. 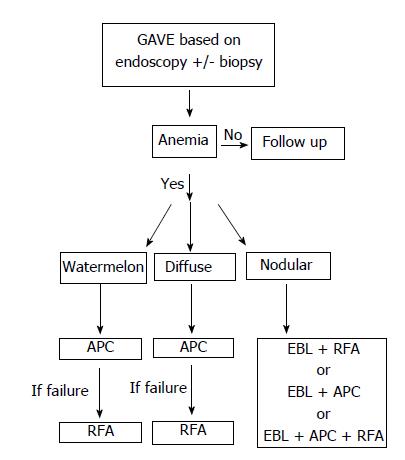 The newly introduced TTS-RFA is an improvement over the Halo90 system as it enables the endoscopist to reach all areas of the antrum by internally rotating the catheter without having to remove the endoscope. While it does have a reduced ablative area (1.2 cm2)[22], it delivers up to 120 pulses per session compared to 80 pulses delivered by the Halo90 systems. While TTS-RFA is an effective treatment for GAVE, it may not be sufficient to some subgroups of patients.

EBL has lately been demonstrated as a good alternative to APC especially in refractory cases of GAVE and has been found to have a similar safety profile and per Zepeda’s randomized controlled time performed better than APC[11,24].

The optimal treatment for GAVE is still unknown and currently there are no studies comparing every modality. However, it is becoming more apparent that patients with more severe, diffuse or refractory GAVE would benefit from multimodal therapy[11,18].

From our review, our numbers indicate that patients undergoing single modality treatment with TTS-RFA and multimodality treatment had overall increase in mean Hb concentrations and decreased transfusion requirements in the 6 mo following treatment.

Interesting, of the 6 patients described as having nodular GAVE, 4 required multimodal therapy suggesting perhaps the multimodal approach should be applied to this newly described variant. Outcomes were favorable with multimodal approach in this group showing increased Hb and decreased transfusion requirements. Increased Hb concentrations and subsequent decreased transfusion requirements together decrease patient costs with fewer hospitalizations related to anemia and outpatient costs. We did not see a statistically significant decrease in hospitalizations in our case series and this may be due to a myriad of factors including the fact that hospitalizations may be due to another of patients’ comorbidities. Also, it is difficult to attain data on number of hospitalizations outside of our facility.

There are several limitations to the conclusions that can be drawn from this study that need to be addressed. First, this is a small, single center, single operator, retrospective study. Second, GAVE was not confirmed on biopsy on all patients. Third, this study is observational and cannot ascertain if any one therapy is superior over other modalities as study design was not to compare modalities. Lastly, patients were followed for a period of 6 mo after the initiation of treatment While the data is promising, it is not clear if GAVE lesions recur or if patients have worsening anemia after our follow-up period of 6 mo.

GAVE is an important cause of chronic anemia and can lead to chronic blood transfusion dependence. Having effective treatment is an important for patient quality of life.

Main objectives were to study patients presenting with GAVE and chronic anemia and following outcomes based on type of GAVE as well as type of intervention.

We reviewed patients with GAVE who underwent treatment at University of Alabama at Birmingham. Included patients had an endoscopic diagnosis of GAVE with associated upper gastrointestinal bleeding or iron deficiency anemia. Medical history including demographic data and chronic medical conditions associated with GAVE were collected. Patients receiving transfusions for other issues outside of GAVE (i.e., for surgeries) were excluded.

Seven out of 15 patients had classic watermelon description for GAVE, 1/15 with diffuse/honeycomb pattern and 6/15 with nodular GAVE per EGD description. Seven out of 15 patients required multimodal treatment. Four out of six of patients with endoscopically nodular GAVE required multimodal therapy. Overall, mean pre- and post-treatment hemoglobin (Hb) values were 8.2 ± 0.8 g/dL and 9.7 ± 1.6 g/dL, respectively (P ≤ 0.05). Mean number of pRBC transfusions before and after treatment was 3.8 ± 4.3 and 1.2 ± 1.7 (P ≤ 0.05), respectively.

Lessons learned from this study include importance of larger study population. Future directions include involving larger patient pool and possibly attempting a prospective approach based on suggested algorithm.