Although esophageal carcinoma and submucosal tumors (SMTs) like leiomyoma are common diseases of the esophagus, the coexistence of those tumors in the same location is extremely rare[1-4]. In this situation, it is very important to diagnose the component of SMT-like protrusion as cancerous invasion into the submucosal layer or a true SMT, because the succeeding treatment may be quite different between them. In this case report, we present a case of intraepithelial esophageal carcinoma with leiomyoma, which has been successfully diagnosed preoperatively by using endoscopic ultrasonography (EUS) and narrow-band imaging (NBI) magnifying endoscopy and treated by endoscopic submucosal dissection (ESD) as a curative treatment.

An asymptomatic 65-year-old man with habits of heavy smoking and alcohol consumption underwent esophagogastroduodenoscopy as a health checkup, which revealed an esophageal tumor in the middle thoracic esophagus (Figure 1A). Endoscopic biopsy taken from the lesion, which was clearly identified as nonstaining area by chromoendoscopy with iodine staining, demonstrated a squamous cell carcinoma (Figure 1B). The proximal edge of the lesion consisted of SMT-like protrusion, which was quite difficult to differentiate cancerous invasion from a true SMT with a conventional white-light or chromoendoscopy. The differentiation between them was very important to select a treatment for the lesion, so additional thorough endoscopic examinations were performed. Novel image enhanced magnifying endoscopy with NBI was conducted for the entire lesion at first, which revealed dilated and elongated intrapapillary capillary loop (IPCL) even on the protrusion, indicated intraepithelial carcinoma (Figure 2). EUS demonstrated a hypoechoic tumor in the muscularis mucosae (MM) covered with intraepithelial layer, which was typical finding of leiomyoma, originated from MM (Figure 3)[5]. From these examinations, preoperative diagnosis of intraepithelial carcinoma with leiomyoma was obtained and ESD was performed as a curative treatment for this lesion after written informed consent was provided from the patient.

Figure 1 Esophageal tumor in the middle thoracic esophagus. A: Conventional endoscopy; B: Chromoendoscopy with iodine staining. 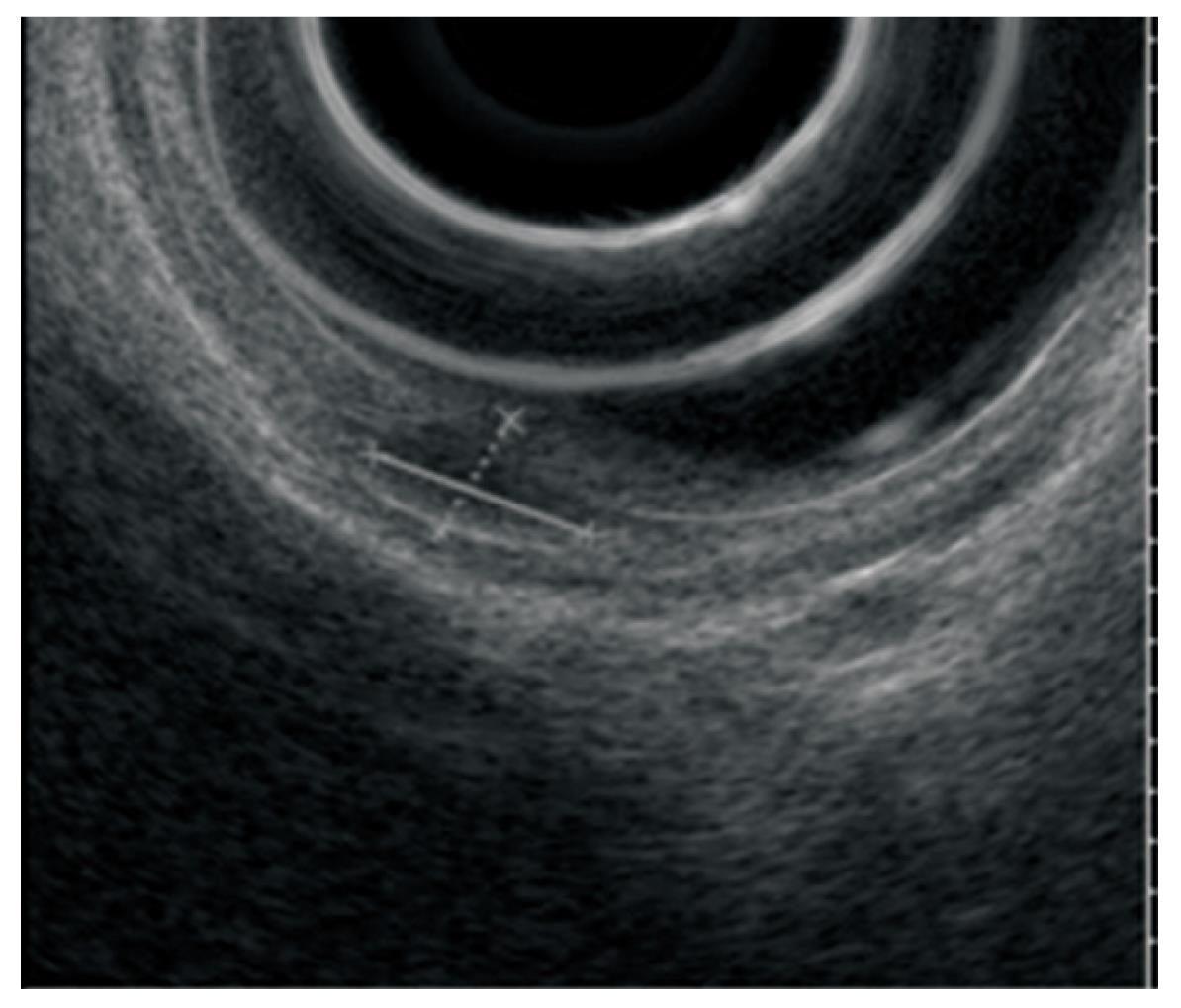 Procedural detail of ESD was described elsewhere[6]. In brief, splash-needle (DN-2618A, Pentax Co., Tokyo, Japan) (Figure 4) was used as an electrosurgical knife for marking, mucosal incision, and submucosal dissection and hyaluronic-acid containing solution was used for submucosal fluid cushion[7,8]. ESD was completed without complications and the esophageal carcinoma with leiomyoma was resected in an en bloc fashion (Figure 5). The resected specimen contained a shallow depression, 34 mm × 26 mm in size in the center, with a hard nodule, 5 mm in size, at the proximal edge and histological diagnosis of an intraepithelial esophageal carcinoma overlying a leiomyoma originating from the MM layer was made (Figure 6). 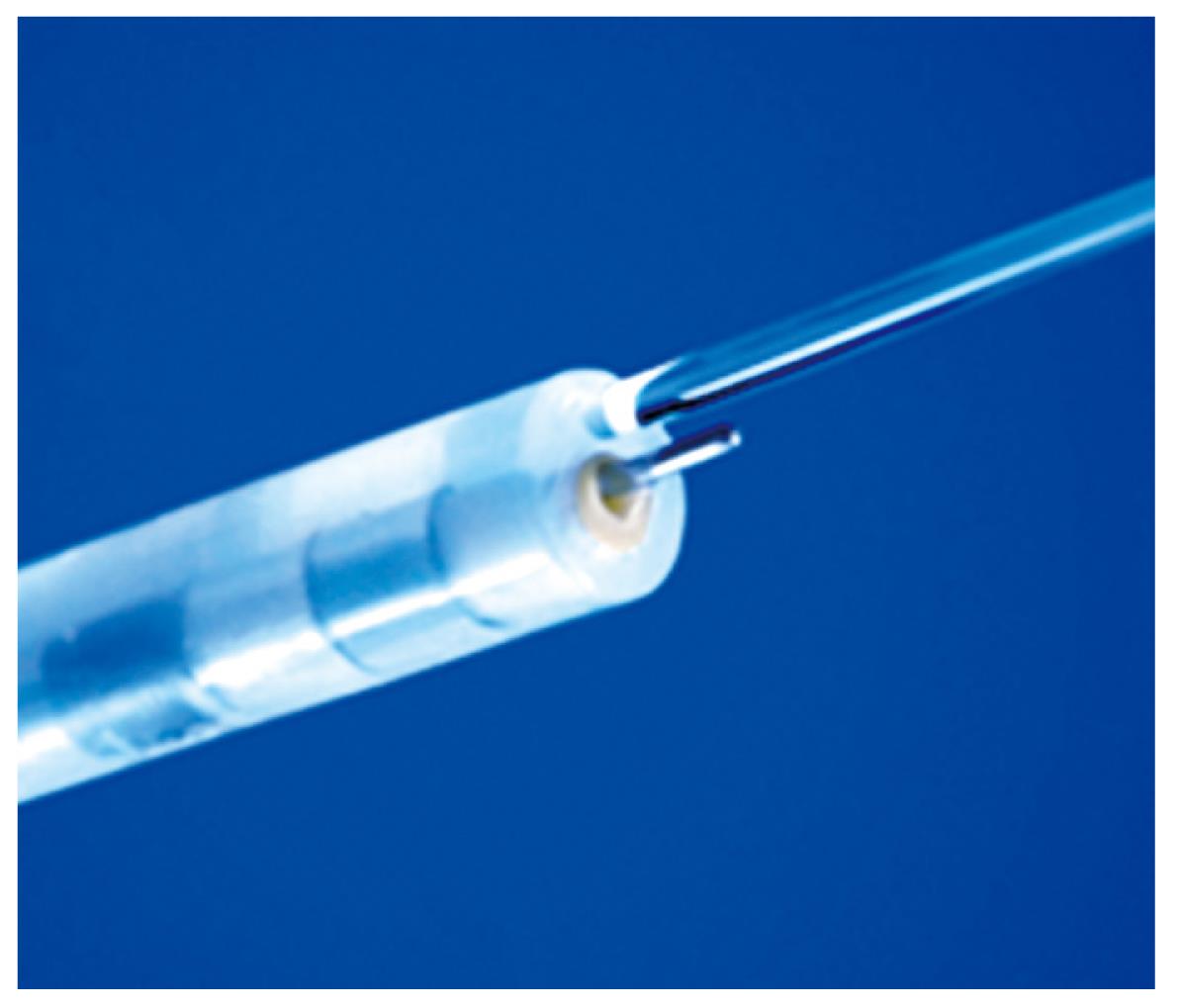 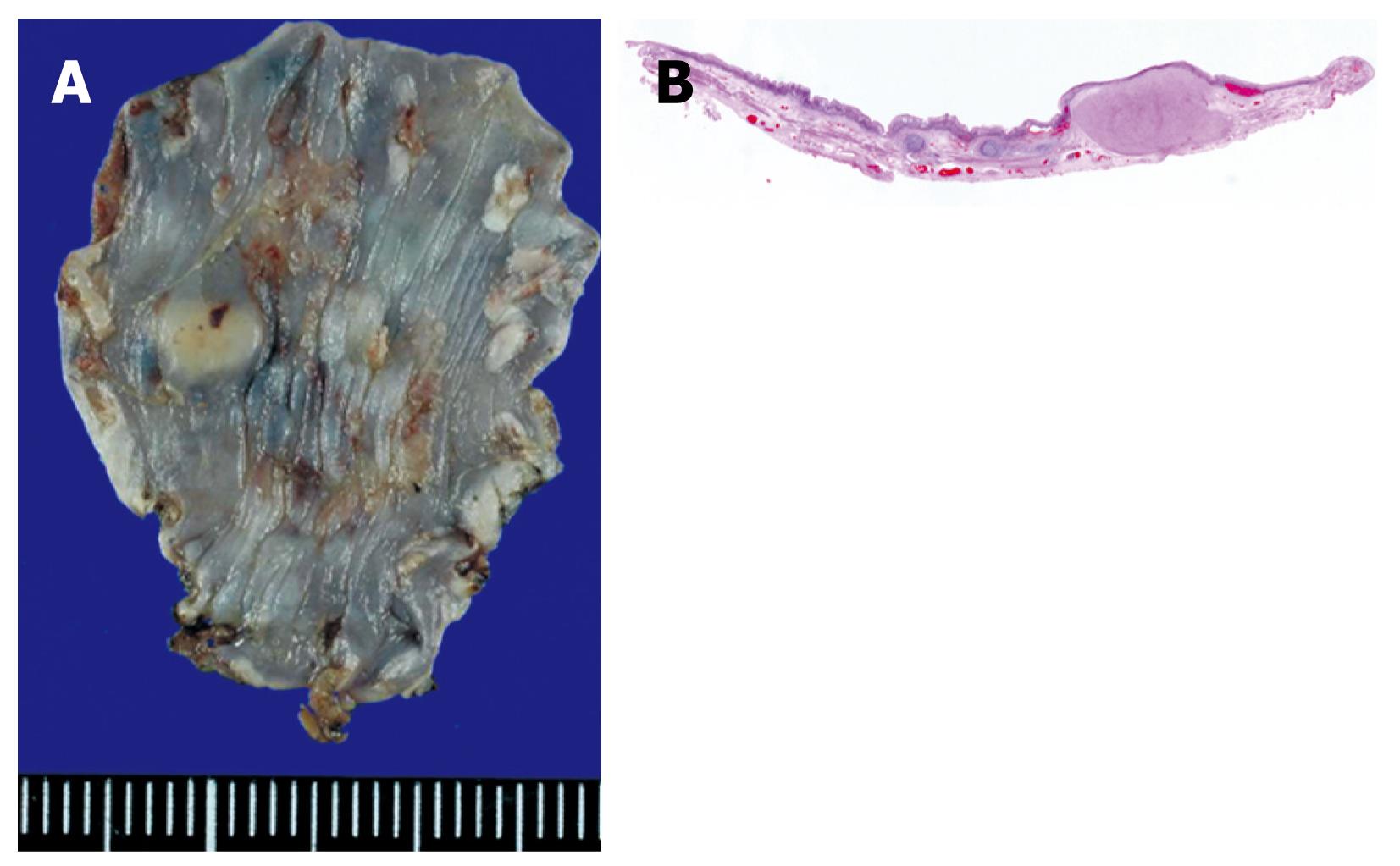 Figure 6 Resected specimen. A: Macroscopic examination reveals a shallow depression, 34 mm × 26 mm in size in the center of the specimen, with a hard nodule, 5 mm in size, at the proximal edge of the depression; B: Histological examination reveals an intraepithelial esophageal carcinoma overlying a leiomyoma originating from the muscularis mucosae.
DISCUSSION

Endoscopic diagnosis plays a central role for deciding therapeutic strategy of esophageal squamous cell carcinoma. Especially, it is crucial to differentiate between intramucosal carcinomas without and with invasion into the MM layer, because this is a cut-off line to differentiate between absolutely node-negative and possible node-positive carcinomas, which means that it is also a cut-off line whether endoluminal surgery is curatively performed or not. Traditional diagnostic modalities are only white-light endoscopy, chromoendoscopy with iodine staining, and EUS. EUS is considered to be a powerful tool to diagnose the depth of cancerous invasion, but the accuracy is reported to be at most 74%[9]. A recently developed image enhanced endoscopy, NBI, is very promising to diagnose the cancerous depth, when magnifying endoscopy is combined with the technology. Detail inspection of IPCLs on the mucosal surface by using magnifying endoscopy with NBI revealed an extremely accurate view into cancerous depth especially among superficial esophageal squamous cell carcinomas[5]. In the present case, the findings that there were only dilatation and elongation of IPCLs without severe destruction or large neovascular formation were quite helpful to diagnose the intraepithelial carcinoma with leiomyoma.

In conclusion, we experienced a case of intraepithelial esophageal carcinoma with leiomyoma mimicking submucosal invasive carcinoma, which is successfully diagnosed with combination of EUS and magnifying endoscopy with NBI. By the reliable preoperative diagnosis, the patient could avoid radical esophagectomy with lymph node dissection and treated curatively by ESD with preservation of the esophageal physiology.