METHODS: As the first examination, technical application of subserosal injection was tested 10 times using resected porcine stomachs. As the second examination, ER was applied to make six mucosal defects per stomach in three live minipigs and thermal damage was given on the proper muscle layer by using hemostatic forceps. Following the thermocoagulation, 1 mL of normal saline and HA, respectively, was injected targeting the subserosal layer in two mucosal defects each and the rest kept no injection as the control. The minipigs were recovered from the anesthesia and kept fasting until euthanasia which was carried out around 24 h after the procedures.

CONCLUSION: This study failed to show preventative effects of subserosal injection of HA on postoperative perforation due to technical faults. However, this concept has a possibility to change strategy of ER with further technical innovation.

Owing to the remarkable development in therapeutic endoscopy, epithelial neoplasms in the gastrointestinal (GI) tract those fulfill the node-negative criteria of each organ have been endoscopically resected, especially in Japan[1,2]. Endoscopic mucosal resection (EMR), that is inject, cut technique or inject, suck, cut technique, is a conventional method applied for a small and non-ulcerative neoplasms and endoscopic submucosal dissection (ESD), that is inject, mucosal incision, submucosal cut technique with electrosurgical knife, is a relatively novel method applied for a large or ulcerative neoplasms[3]. When the target becomes more complex, complications accompanying these techniques frequently occurred.

Hyaluronic acid is a thick substance with high viscosity that is widely found in connective tissues. The current approved indications for its use in clinical practice in many countries, including Japan, Europe and the United States, are for intra-articular injections for osteoarthritis, as well as in eye surgery[7]. In Japan, it is also approved for submucosal injection material to lift the lesion from the proper muscle layer during endoscopic resection[8,9]. From the viscous nature of hyaluronic acid, we hypothesized that subserosal injection through the proper muscle layer after endoscopic resection might prevent from postoperative perforation. So we conducted this animal study to investigate whether our hypothesis was acceptable or not.

As the first examination, two resected porcine stomachs within a few hours after euthanasia was obtained from a butcher to validate the technical application of the injection needle in the subserosal layer after endoscopic resection. The resected stomachs were set on a training system for endoscopic procedure (Figure 1) after washing the residue and mucus on the mucosal surface by normal saline. A slim upper gastrointestinal endoscope (XQ230, Olympus, Tokyo, Japan) was inserted in the stomach and a standard ESD technique[10] by using a flex knife (KD-630L, Olympus) as an electrosurgical knife and normal saline as submucosal injection fluid was performed to make ten mucosal defects in total, about 3 cm in diameter, in different locations of the gastric bodies. Through the exposed proper muscle layer, 1 mL of 0.4% hyaluronic acid preparation (Mucoup, Johnson & Johnson Co., Tokyo, Japan) (HA) was injected targeting the subserosal layer by 23-gauge disposable injection needle (NM-200L-0423, Olympus) and the technical availability of subserosal injection was investigated. 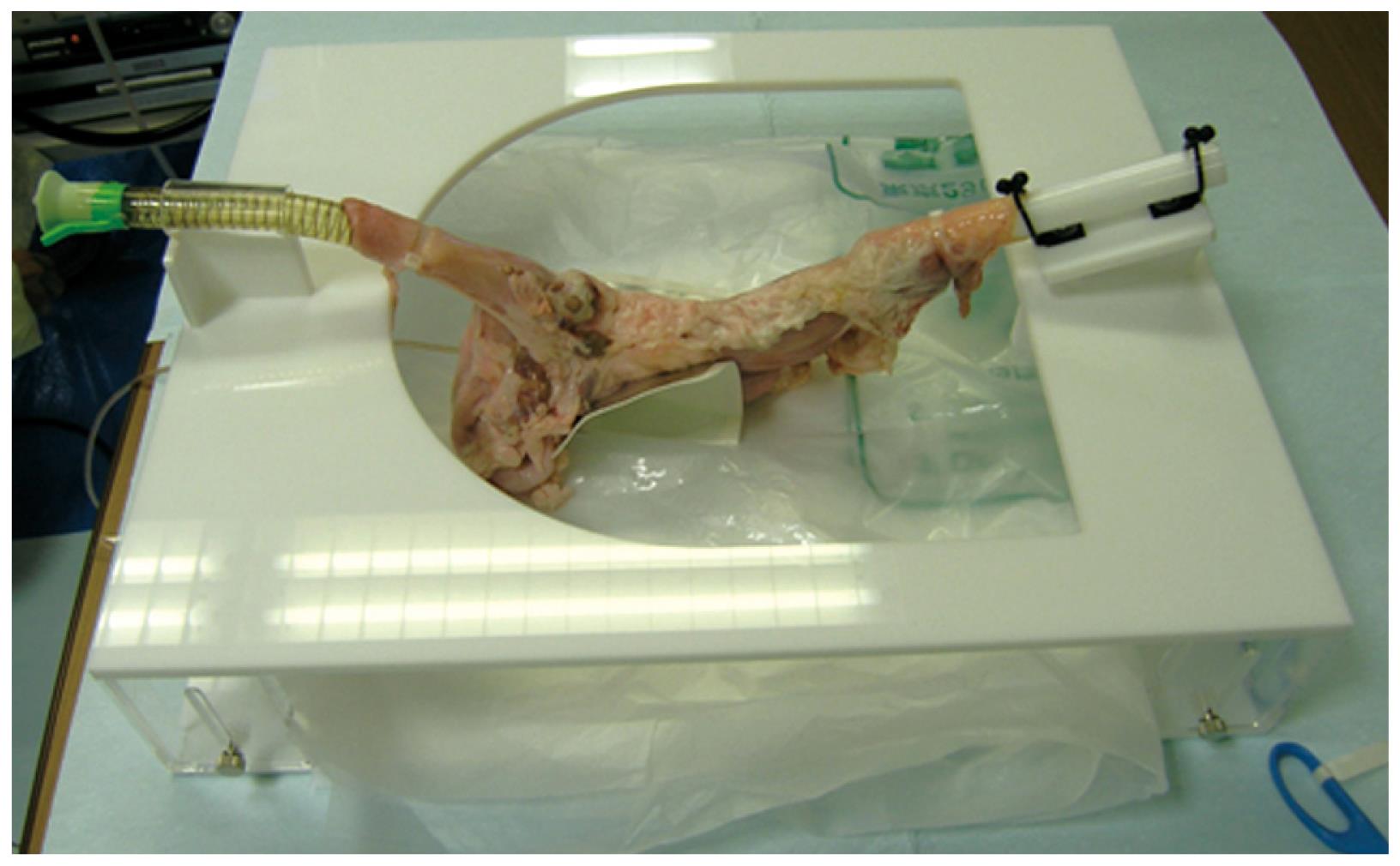 For the second examination, three living minipigs (Sus scrofa; Miniature Swine) were used for an over-night survival study to elucidate the preventive effect of subserosal injection of hyaluronic acid for postoperative perforation. On the first day, endoscopic procedures were performed for the minipigs under general anesthesia after overnight fasting. An endoscope with two instrumental channels (GIF-2TQ240, Olympus) was used for the following entire examination. The stomachs were sufficiently inflated with air after the residue and mucus were washed out with tap water which was splashed from the instrumental channel.

After these preparations, endoscopic mucosal resection (EMR) was applied to make six mucosal defects per stomach with a standard EMR technique by using normal saline injection and an electrocautery snare. The electrosurgical unit used was VIO 300D (ERBE Elektromedizin, Tübingen, Germany), which employed a special coagulation current, soft coagulation current. After more than 30 min of the EMR procedure when the normal saline injected for EMR in the submucosal layer was absorbed into surrounding tissues, thermal damage was given on the proper muscle layer by using hemostatic forceps (Coagrasper, Olympus) at the settings of soft coagulation mode, effect 5, 50 watts for 10 s. The muscular damage imitated thermal damage for treatment of non-bleeding and bleeding vessels on the proper muscle layer during and immediately after endoscopic resection[11].

Following the thermocoagulation, 1 mL of normal saline and HA, respectively, was injected targeting the subserosal layer through the proper muscle layer by using the injection needle in two mucosal defects each to elucidate protective effects of postoperative perforation. The rest kept no injection as the control. The minipigs were recovered from the anesthesia and kept fasting until euthanasia which was carried out around 24 h after the procedures.

The retrieved stomachs were cut on the points of coagulation and fixed with formalin and embedded in paraffin. A histological section was made from each block, stained with hematoxylin and eosin, and examined tissue damage microscopically. 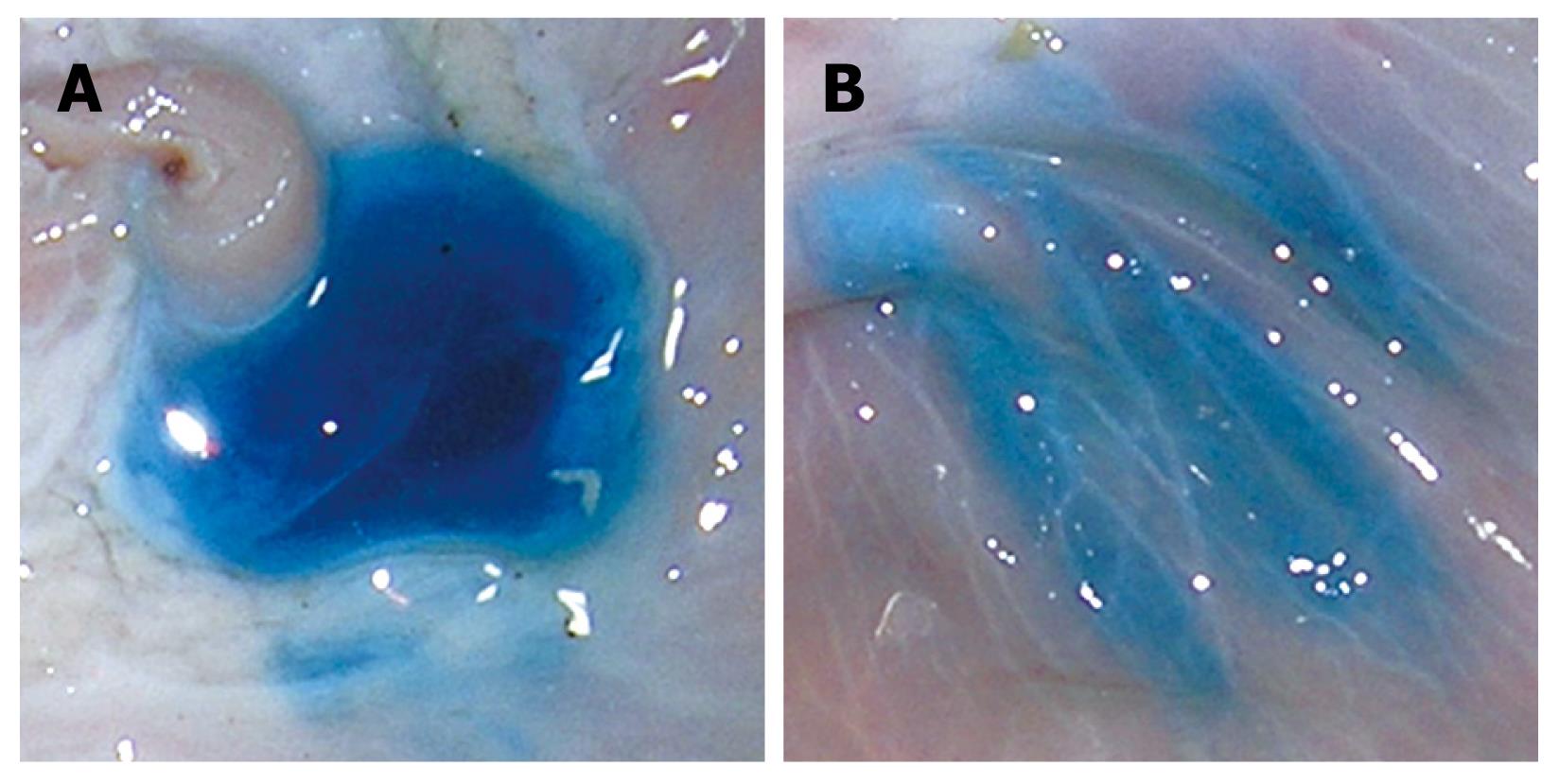 In vivo study of the minipigs revealed that transmural tissue damage due to thermocoagulation was observed in 50% (3/6), 50% (3/6), and 50% (3/6) of the points where saline, HA, and nothing were injected, respectively. However, no postoperative perforation occurred at any point of the thermocoagulation. In terms of possible protective effects of postoperative perforation by subserosal injection, apparent identification of the subserosal layer, which was expected to be retaining of injected material, was observed at only two points where HA was injected (Table 1). The representative histological sections of each group were shown in Figure 3. 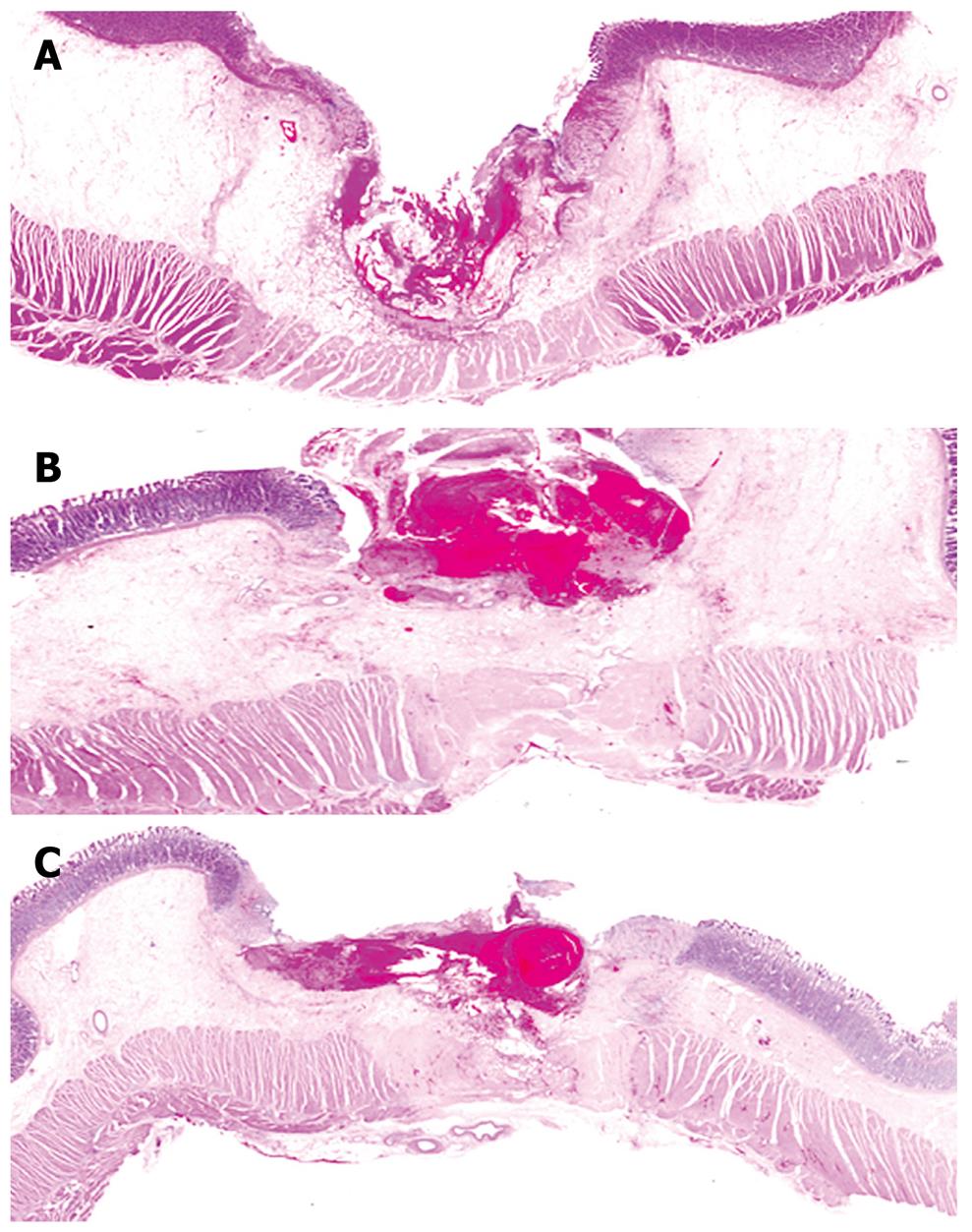 Figure 3 Representative histological sections at 24 h after the applications. A: No injection; B: Saline injection; C: Hyaluronic acid injection.
DISCUSSION

This study did not reveal the usefulness of subserosal injection through the proper muscle layer after endoscopic resection to prevent from postoperative perforation. The biggest fault of our pilot study may be an estimate that appropriate placement of hyaluronic acid in the subserosal layer were surely possible by using a commonly-used injection needle. However, in the ex vivo study, only 20% (2/10) and 40% (4/10) of injection, completely and partially, respectively, succeeded in subserosal placement of hyaluronic acid. When the placement was not validated, it was natural not to obtain reliable results from the in vivo study. So we have realized that technical innovation to put hyaluronic acid in the subserosal layer precisely is firstly necessary to advance our study.

Although there were these faults in our pilot study, we believe that this study is meaningful in terms of a new foothold to cope with the rare but serious complication, postoperative perforation. When the protective effect on tissue destruction is elucidated by precise placement of hyaluronic acid into subserosal layer, there are several breakthroughs in addition to preventative effects on postoperative perforation in the field of endoscopic resection as follows: First, little possibility of postoperative perforation even in the small intestine which has the thinnest wall in the GI tract may result in intensive treatments of bleeding or non-bleeding visible vessels on the mucosal defect during and after mucosal resection. This should lead to a less frequency of postoperative bleeding[12]. Closure of the mucosal defect after endoscopic resection may be unnecessary for the fear of postoperative perforation, although preventative effect on postoperative bleeding should be considered as another possible indication. Second, the targets for endoscopic resection may be technically extended into non-lifting lesions which stick on the proper muscle layer without fear of transmural thermal injury, because detachment of these lesions just on the proper muscle layer or at the level of internal muscle layer is necessary. Third, retention of the substance into the subserosal layer may lead to not only protective effect of tissue destruction, but also acceleration of healing process, although there is no supportive data so far. Mixture of several promising molecules such as growth factors may be useful for healing of the injured site.

In summary, this study failed to show preventative effects of subserosal injection of hyaluronic acid on postoperative perforation. The main reason is technical difficulty in precise placement of hyaluronic acid into the subserosal layer. However, technical innovation in the near future enables to place it precisely, which has a possibility to change strategy of endoscopic resection in the GI tract.

One of rare but serious complications of endoscopic resection is post-operative perforation. The possible cause is transmural tissue damage due to thermocoagulation and there is no knowledge to prevent it so far.

This study shows the first attempt to make subserosal injection of hyaluronic acid and its preventative effect on postoperative perforation.

Although technical refinement should be necessary, the concept to make subserosal injection is promising.

There is novelty and innovation in the research field and this study may change the strategy of endoscopic resection in the gastrointestinal tract with further efforts.