Over the last decade, the role of renin-angiotensin system (RAS) on the development of obesity and its comorbidities has been extensively addressed. Both circulating and local RAS components are up-regulated in obesity and involved in non-alcoholic fatty liver disease onset. Pharmacological manipulations of RAS are viable strategies to tackle metabolic impairments caused by the excessive body fat mass. Renin inhibitors rescue insulin resistance, but do not have marked effects on hepatic steatosis. However, angiotensin-converting enzyme inhibitors and angiotensin receptor blockers (ARB) yield beneficial hepatic remodeling. ARBs elicit body mass loss and normalize insulin levels, tackling insulin resistance. Also, this drug class increases adiponectin levels, besides countering interleukin-6, tumoral necrosis factor-alpha, and transforming growth factor-beta 1. The latter is essential to prevent from liver fibrosis. When conjugated with peroxisome proliferator-activated receptor (PPAR)-alpha activation, ARB fully rescues fatty liver. These effects might be orchestrated by an indirect up-regulation of MAS receptor due to angiotensin II receptor type 1 (AT1R) blockade. These associations of ARB with PPAR activation and ACE2-angiotensin (ANG) (1-7)-MAS receptor axis deserve a better understanding. This editorial provides a brief overview of the current knowledge regarding AT1R blockade effects on sensitivity to insulin and hepatic structural alterations as well as the intersections of AT1R blockade with peroxisome proliferator-activated receptor activation and ACE2-ANG (1-7) - MAS receptor axis.

Liver injuries can result from virus infection, alcohol and/or drugs abuse, and autoimmune diseases[1]. However, the increase in high-energy dense food availability combined with a sedentary lifestyle brought up unprecedented obesity rates, with the consequent increase in its comorbidities (hypertension, type 2 diabetes, and dyslipidemias) prevalences[2]. The metabolic disturbances caused by obesity also impair liver structure and physiology, with increasing prevalence of non-alcoholic fatty liver disease (NAFLD) and greater susceptibility to more harmful types of liver diseases such as non-alcoholic steatohepatitis (NASH) and liver fibrosis[3,4].

Insulin resistance (IR) plays a central role in NAFLD pathogenesis[5]. Also, the low-grade inflammation observed in obese subjects and the increased adipocyte lipolysis are key factors for a more pronounced lipid droplet deposition within the hepatocytes[6]. Briefly, IR has opposite effects on adipose tissue and liver. On one hand, resistance to insulin action elicits enhanced lipolysis rate in the white adipose tissue as an attempt to compensate for the lack of glucose to be used as fuel by the adipocytes. Hence, increased free fatty acids (FFAs) are delivered to the liver[3,7]. On the other hand, insulin resistance impairs beta-oxidation within hepatocytes by reducing the expression of carnitine palmitoyltransferase 1 in the hepatic mitochondrion, besides reducing very low-density lipoprotein (VLDL) secretion. These conditions lead to unbalanced hepatic lipid metabolism as FFAs inflow surpasses fatty acid oxidation and lipoprotein exportation[8,9]. Therefore, excessive fatty acids are converted into triglycerides through the up-regulated lipogenic pathways, which accumulate as lipid droplets within hepatic parenchyma, characterizing the NAFLD[10].

Considering that NAFLD is currently considered as the hepatic manifestation of the metabolic syndrome and that this condition, despite benign at first, can initiate a harmful spectrum of liver diseases, treatments should target hepatic alterations, but also alleviate others comorbidities such as hypertension, inflammation, and insulin resistance[11,12]. Recently, the activation of a local renin-angiotensin system (RAS) in the liver has been linked to NAFLD onset and progression towards liver fibrosis[13]. In this way, the RAS emerges as a potential target to tackle hepatic alterations stemmed from obesity and other metabolic constraints imposed by increased body fat mass[14].

From a classical view, the circulating RAS is implicated in the systemic hemodynamic regulation. Briefly, under a reduced renal perfusion, renin is secreted by the juxtaglomerular apparatus. This enzyme converts angiotensinogen (produced by the liver) in angiotensin 1 (ANG I), which is converted into angiotensin 2 (ANG II) by the angiotensin-converting enzyme (ACE). ANG II has countless physiological effects such as the stimulation of aldosterone release, which promptly reestablishes the hemodynamic control by enhancing water and sodium retention in the kidneys[15,16].

Recently, with the discovery of ACE2, another branch of RAS has been described. ACE2 converts ANG II to ANG (1-7) and cleaves ANG I into ANG (1-9), which is also converted to ANG (1-7) by ACE. ANG (1-7) exerts its physiological effects through the MAS receptor. It can be argued that [ACE2-ANG (1-7)-MAS axis] counters the (ACE - ANG II-AT1R axis) effects. So, ACE2/ACE balance is an important target to tackle metabolic diseases[23-25].

Lately, apart from this circulating RAS, many local RAS have been described in organs such as heart, pancreas, adipose tissue, skeletal muscle, and liver[17,26,27]. Animal models of obesity show raised circulating renin, angiotensinogen, and ANG II[28], besides higher expression of ACE and AT1R in the pancreas, which inhibit important steps of the insulin signaling cascade and contribute to IR and type 2 diabetes onset[29,30]. Intrahepatic activation of RAS favors NAFLD onset as it elicits greater triglycerides accumulation due to impaired beta-oxidation in conjunction with a significant fall in VLDL secretion. These conditions comply with the increase of de novo lipogenesis (the formation of fatty acids from excessive dietary carbohydrate)[27,31]. Concomitantly, the increased production of reactive oxygen species by mitochondria and the raised expression of pro-inflammatory cytokines contribute to the progression to NASH[22]. These effects are mainly mediated by higher expression of ACE, ANG II, and AT1R concomitant to reduced ACE2 tissue expression in the hepatocytes of obese mice[32].

Moreover, ANG II activates hepatic stellate cells (HSCs). Enhanced transforming growth factor-beta 1 (TGF-beta1) underlies this event, which implies a higher susceptibility to hepatic fibrosis, once HSCs acquire a myofibroblast phenotype[33,34]. These harmful effects of ANG II on liver structure and function are mediated predominantly by its interaction with the AT1R and results in collagen synthesis, pro-inflammatory cytokines release, stimulation of cell migration and proliferation[27,35]. These events altogether contribute to the second hit proposed by the two-hit theory, where inflammation and fibrogenesis play a decisive role in NAFLD progression to NASH[36].

Obese mice show higher hepatic steatosis rate coupled with insulin resistance, a pro-inflammatory adipokine profile, reduced hepatic beta-oxidation of fatty acids and enhanced lipogenesis[37]. Recently, it has been shown that a mouse model of NAFLD, even without obesity, presents with enhanced ACE/AT1R expression locally in the liver[38]. Rats with liver fibrosis present with favored ACE-ANGII-AT1R axis over ACE2-ANG (1-7)-MAS receptor axis, confirming that AT1R is involved with NAFLD progression to NASH and fibrosis[24,25]. These observations suggest that the local expression of AT1R is related to NASH onset and AT1R blockade, with the consequent ACE2 induction, emerging as a potential approach to prevent liver fibrosis and chronic inflammation.

BLOCKADE OF AT1 RECEPTOR EFFECTS ON INSULIN RESISTANCE AND FATTY LIVER

The impact of pharmacological manipulations of the RAS system on insulin resistance and liver structure is a new field of study. Evidence from animal studies shows that aliskiren (a direct renin inhibitor) rescued insulin resistance and hepatic steatosis, though its effects are not more advantageous than ARBs[39,40].

Olmesartan, a pure ARB, reduced body mass and hepatic triglyceride content, besides recovering the expression of hepatic antioxidant enzymes and sensitivity to insulin in rats[44,45]. The recovery of uncoupling protein 2 expression is put forward as the main mechanism that enhances hepatic lipid metabolization and antioxidant capacity after the blockade of AT1R[44]. Amelioration of IR after olmesartan treatment is also perceived in humans[46].

Irbesartan, another ARB, and an ACEi (perindopril) prevented obese Zucker rats from developing fatty liver in a recent study. Both treatments elicited a marked reduction in hepatic steatosis percentage, with no difference with the lean control group[47]. A remarkable reduction in hepatic expression of TNF-alpha, interleukine-6, and TGF-beta1 is produced by enhanced ACE2-ANG (1-7)-MAS receptor, leading to the alleviation of hepatic IR and, consequently, reducing fatty liver[25]. Furthermore, low TGF-beta1 expression complies with the marked reduction in liver fibrosis in obese animals treated with irbesartan[44]. In agreement to this, losartan, an ARB, led to anti-proliferative and anti-fibrogenic effects in ANG II stimulated HSCs in vitro. Once again, a marked reduction in TGF-beta1 expression and AT1R down-regulation explain these findings[48].

It was recently proposed a synergistic action between hepatic cholesterol metabolism and intrahepatic RAS activation in the physiopathology of NAFLD. In this context, chronic local RAS activation in the liver augments the extracellular matrix synthesis and disrupts LDL metabolism by impairing LDL receptor functioning. These alterations seem to rely on AT1R activation by ANG II. In agreement to this, telmisartan, an ARB that is also a partial peroxisome proliferator-activated receptor (PPAR)-gamma agonist, prevented from lipid deposition and overrode the translocation of SCAP/SREBP-2 complex from the endoplasmic reticulum to Golgi, blocking LDL receptor gene transcription in HepG2 cells[31].

It is likely that the favored activity of the ACE2-ANG (1-7)-MAS receptor action under the AT1R blockade mediates the beneficial findings[25]. With regard to this, the infusion of ANG (1-7) in bile duct-ligated rats elicited fibrosis attenuation by the suppression of HSCs activity, while the use of MAS receptor antagonist confirmed these findings as the animals presented with a maximization of liver fibrosis, supported by higher expression of collagen and TGF-beta1[53]. Figure 1 illustrates the main pathways related to ARBs effects on the liver. 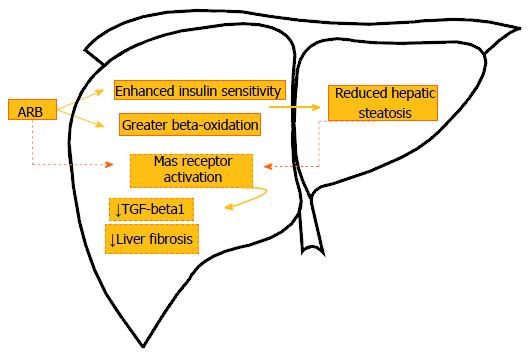 Increasing rates of obesity and NAFLD have drawn the attention of the scientific community to strategies to treat these metabolic diseases. Local RAS is up-regulated in the liver from obese individuals and in lean individuals with fatty liver. Among the pharmacological manipulations of RAS, AT1R blockade is considered the best approach as it favors AT2R effects and seems to activate indirectly the ACE2-ANG (1-7)-MAS receptor axis, with additional beneficial effects. The combination of AT1R blockers with oral ANG (1,7) treatment seems to be a promising approach to treating NAFLD and NASH and prevent liver fibrosis.