In the last decades the prevalence of non-alcoholic fatty liver disease (NAFLD) has increased as a consequence of the childhood obesity world epidemic. The liver damage occurring in NAFLD ranges from simple steatosis to steatohepatitis, fibrosis and cirrhosis. Recent findings reported that fatty liver disease is related to early atherosclerosis and cardiac dysfunction even in the pediatric population. Moreover, some authors have shown an association between liver steatosis and cardiac abnormalities, including rise in left ventricular mass, systolic and diastolic dysfunction and epicardial adipose tissue thickness. In this editorial, we provide a brief overview of the current knowledge concerning the association between NAFLD and cardiac dysfunction.

Core tip: Recently, growing scientific evidences suggest that obese children with non-alcoholic fatty liver disease are more predisposed to cardiovascular disease. Interestingly, this association seems to be independent from adiposity. In fact, based on recent findings, it has been proposed that liver steatosis plays an independent role in determining early atherosclerosis and cardiac dysfunction.

Currently, non-alcoholic fatty liver disease (NAFLD) represents the major cause of chronic liver disease in childhood and is considered a multisystem disease that affects many extra-hepatic organs[1]. Experimental evidence suggests that children with NAFLD have a higher risk of developing end stage liver disease than the general population of United States of same age and gender[2]. Moreover, NAFLD has emerged as an independent risk factor for cardiovascular diseases (CVD)[3,4], including coronary artery disease and cardiac dysfunction[5-8].

The molecular mechanisms linking NAFLD to cardiovascular complications are still poorly understood[6,8]. Children with NAFLD display increased free fatty acids that may lead to myocardial lipid accumulation with consequent impairments in myocardial substrate metabolism and efficiency and, finally, cardiac dysfunction[7,8]. Moreover, the presence of a low-grade inflammatory state in these patients contributes to the release of several mediators that amplify this condition[6,8]. Therefore, it has been hypothesized that intra-hepatic fat might exert a key pathogenetic role in developing cardio-metabolic complications (Figure 1). 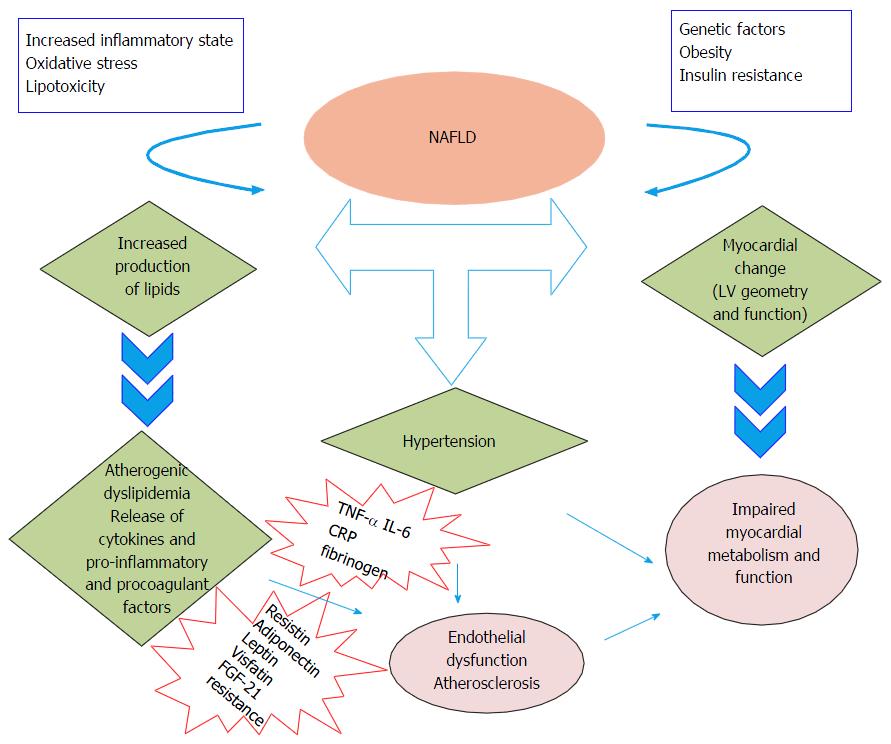 In the last 20 years, NAFLD has become the most common liver disease in pediatrics[1], as result of the increased prevalence of early onset obesity[2-4]. Although NAFLD develops in the context of insulin resistance related to obesity, it is possible that a parental effect exists. As suggested by experimental studies in rats, in fact, paternal and maternal obesity during preconception could lead to obesity, glucose metabolism abnormalities and liver steatosis in the offspring[5].

NAFLD represents an independent risk factor for CVD as it is associated with dyslipidemia, insulin resistance and alterations of cardiac function independent of the degree of obesity[3,4].

Recent studies[2,3,6] have shown that atherosclerosis and alterations of cardiac function may occur already during childhood, as demonstrated by the presence of early onset subclinical atherosclerosis as measured by impaired flow-mediated vasodilation and increased carotid artery intimal medial thickness as well as by the presence of abnormalities in myocardial structure and function in obese children and adolescents[3,4] (Table 1).

It is possible that intra-hepatic fat accumulation may be a pathogenic determinant of CVD. In fact, NAFLD can lead to atherosclerosis by causing an abundant secretion from the liver of lipoproteins [large very low density lipoproteins (VLDL)][7], which, in obese individuals with NAFLD, are abundant in oxidized fatty acids[8,9]. The higher concentration of large VLDL results in a high concentration in plasma of very small LDL, which in turn are a major contributor to the atherosclerotic plaque[7], and their accumulation within the plaque would ultimately lead to ischemic events. NAFLD per se, in fact, is a hyperlipidemic state in which adipose tissue insulin resistance[10] and enhanced hepatic de novo lipogenesis[11] lead to an abnormal accumulation of fat in the liver, turning the hepatocytes in a fat producing factory.

It is important to remember that myocardial atherogenesis occurs very early in life. Seminal studies in the Bogalusa cohort showed that atherosclerosis often begins in pediatric age[12], as demonstrated by the fact that fatty streaks are detected already in the aorta and the coronary arteries of children[6,13]. Since NAFLD can begin during childhood in obese children, it is reasonable to think that it can be an important determinant of these early events observed already in the pediatric population.

While, the association between NAFLD and atherosclerosis could be easily explained by the abundance of circulating lipids present in obese children with NAFLD, it is more difficult to explain the relationship between NAFLD and cardiac function and geometry[14,15]. It has been reported that adolescents with NAFLD show an impaired systolic and diastolic function and an increased left ventricular mass compared to both healthy controls and age and gender matched obese adolescents without NAFLD[14,15] (Table 1).

To explain this observation several pathogenic mechanisms have been hypothesized, including the role of the liver as a generator of circulating mediators that could be involved in the cardiac remodeling[3,11,16,17]. In fact, the presence of a low-grade inflammatory state in patients obese patients with NAFLD and insulin resistance contributes to release of several cytokines and adipokines (e.g., IL-6, TNF-alpha, visfatin, FGF-21, adiponectin, resistin, leptin) that amplify this condition and worsen the metabolic phenotype[3,11,17]. Whether the trigger for this condition, usually refereed to as “sterile inflammation”, is NAFLD or insulin resistance per se is unclear, but a large body of evidence suggests that inflammatory cytokines may be the link among fatty liver, insulin resistance and myocardial changes[3,17]. In fact, adiponectin, a strong insulin sensitizer, seems to be decreased in patients with NAFLD and some studies have suggested that low adiponectin levels may affect cardiac function and atherogenic risk. In contrast, patients with NAFLD experience also an increased production of pro-inflammatory and pro-atherogenic cytokines (IL-6, IL-12, TNF-alpha), which in turn worsens insulin resistance, mostly through the down-regulation of insulin-receptor-substrate and by affecting gluconeogenesis[3,17], these compounds could also affect the cardiac morphology and dynamics. More importantly, some data suggest that fibroblast growth factor 21 (FGF-21), a protein synthetized and secreted by the liver in high amounts in obese subjects with fatty liver, might play a role in cardiac hypertrophy[16]. Some investigators have speculated that FGF-21 resistance occurring in NAFLD could led to cardiac damage in NAFLD patients[16].

On the other hand, given that NAFLD is associated with high systolic blood pressure[18] it could be also argued that changes in myocardial structure might be the consequence of high blood pressure[18]. Against the latter hypothesis, there is the evidence that changes in cardiac morphology observed in children with NAFLD do not resemble the cardiac adaptation consequence of high blood pressure[19]. In fact, hypertension increases left ventricular (LV) mass and changes heart morphology as a result of overload. Recent findings reported that obese children both with and without NAFLD showed no differences in LV mass and posterior wall thickness, while children with NAFLD were more likely to present low LV strain rate - a load - independent parameter that expresses LV elastance and deformation-than those without NAFLD. Therefore, the authors suggested that NAFLD affects myocardial fiber organization leading to systolic and diastolic dysfunction[19].

Besides the large amount of literature suggesting an association between NAFLD and CVD, the pathophysiologic mechanisms underlying these associations are far from being clear, therefore, in the future more studies should be focused on this area of research to unravel those mechanisms and to develop novel therapeutic strategies.

Moreover, we need to establish also whether NAFLD could be considered a marker of subclinical atherosclerosis as well as a cardiovascular risk factor even at a very early age. In fact, because of its strong relationship with CVD, NAFLD diagnosis could represent a red flag for the presence of high cardiovascular risk. In this scenario the prevention and treatment of NAFLD may play a crucial role in avoiding not only end-stage liver disease but also CVD.