To delay surgery until the patient is in a better condition, and thus to decrease postoperative morbidity.

Using this algorithm we treated three patients aged 55, 75 and 80 years. In all three patients the clinical presentation was fever without a clear source of infection; all had nonspecific symptoms such as general malaise, dyspnea, and abdominal discomfort in the previous 15 d. They came to the emergency room at our hospital due to deterioration of their general condition. Analytical tests showed leukocytosis, neutrophilia and increased polymerase chain reaction. In all cases an abdominal computed tomography (CT) was performed and liver hydatid abscess (LHA) was detected. The mean size of the LHA was 12 cm.

All patients underwent CT-guided percutaneous drainage. The purulent material obtained was cultured, and Klebsiella pneumoniae, Streptococcus viridans and Streptococcus salivarius were identified. Antibiotic treatment was given adapted to antibiotic sensitivity testing. Surgery was performed two weeks after admission, once the patient’s condition had improved. All three patients underwent an almost total cystectomy, cholecystectomy and omentoplasty in the residual cavity. Complications were: Clavien I (atelectasis and pleural effusion) and Clavien II (transfusion). The average length of stay (pre and postoperative) was 23 d. At the follow-up, no relapses were recorded.

Core tip: Liver hydatid abscess (LHA) management is not standardized. The traditional treatment is emergency surgery but the results are usually suboptimal because the patients are in poor medical condition. The initial treatment of LHA in septic patients with percutaneous drainage in combination with antibiotic therapy and supportive measures allows control of the infection and improves the patient’s general condition. This enables the physician to treat the patient in greater safety and also reduces complications.

Cystic echinococcosis is a zoonotic disease that is found worldwide. It is caused by larvae of the genus Echinococcus, and is endemic in certain areas of the planet[1]. The liver is the most common location for cyst development[2]. Infection of the liver hydatid cyst (LHC) and pyogenic abscess formation is a rare but highly severe complication. The clinical course is insidious and it is usually diagnosed when the infection has progressed, affecting the patient’s overall condition and possibly even causing septic shock[3]. The treatment of liver hydatid abscess (LHA) is not yet standardized. Several options are available with the dual purpose of draining the LHA and treating the LHC, including simple surgical drainage, or surgical drainage associated with total or subtotal pericystectomy and percutaneous drainage[3]. We propose percutaneous drainage of the LHA as a first therapeutic step, and later, when the patient’s general condition improves, surgical treatment of the LHC.

From May 1, 2007 to March 1, 2016 we treated 135 patients with LHC, of whom 72 underwent surgery. Three of these patients debuted with a severe septic condition caused by LHA. These patients were initially treated with computed tomography (CT)-guided percutaneous drainage of the abscess, and then underwent scheduled surgery when their condition had improved. Their data are included in Table 1.

We also conducted an unlimited literature search in PubMed, updated on 1 January 2016, with the following strategy: [(echinococcosis hepatic complications) and (liver abscess)], which yielded 136 papers. Review of the abstracts found three papers related to the topic of the current paper, and their references were analyzed. The aim of this review was to assess the literature on the value of percutaneous drainage in LHA for delaying surgery until the patient is in a better overall condition, in order to reduce postoperative morbidity and to perform definitive treatment of LHC. 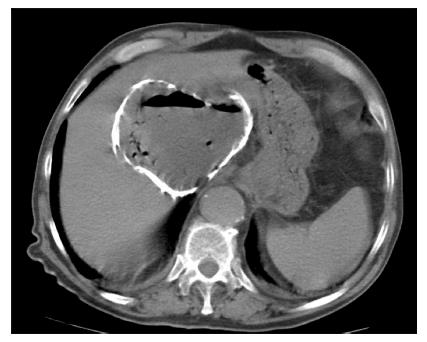 Female, 75 years old. Past medical history: Hypertension and diabetes mellitus. She came to the Emergency Department due to fever and malaise of several days, severe, with hypotension, tachypnea and tachycardia. Analysis: 24610 leukocytes (95% neutrophils), Hb 10.9 g/dL, INR 1.24, Cr 1.56 mg/dL, polymerase chain reaction (PCR) 315 mg/L, GGT 70 U/L and AST 47 U/L. Abdominal CT revealed a 12 cm abscess in the left liver compatible with LHA. CT percutaneous drainage was performed, obtaining purulent material (Figure 2). In microbiological cultures Streptococcus viridans was identified She received empiric antibiotic treatment adjusted later to amoxicillin/clavulanic acid (1 g/8 h) as a result of the antibiogram. She was admitted to the intensive care unit due to severe SIRS and finally underwent surgery after 12 d when her clinical condition had improved. A right subcostal laparotomy was performed, revealing a LHA located in segments III, IVb, V and VI. Subtotal cystectomy, cholecystectomy and bile duct clearance were performed. Postoperative course was uneventful and the patient was discharged after 5 d (total stay: 17 d). Histopathology showed chronic cholecystitis and hydatid cyst wall. No recurrence was seen at follow-up sessions over a 6-year period. 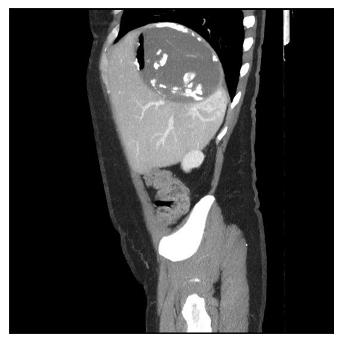 The most severe complications of LHC are rupture, biliary fistula and infection of the cyst, evolving into a liver hydatid abscess[4]. LHA has a prevalence of about 25%. In Manterola’s series it was the most frequent complication (24.6%), but in ours it accounted for only 4.1%[3]. We attribute this huge difference to the lack of a generally accepted worldwide definition of LHA. Some authors define LHA as any hydatid cyst which presents purulent content if opened during surgery, but others require bacterial growth in microbiological cultures in both cases with or without infectious symptoms. Our idea is that LHA should be defined not only in the presence of pus or positive cultures but always with severe infectious symptoms such as high fever, malaise, or even septic shock. The infection that provokes LHA may be primary, due to the invasion of bacteria from small bile ducts communicating into the cyst or rarely through the hematogenous route, or secondary, due to a communication through a fistula with the peritoneal cavity, bronchi, digestive tract, or skin, and after conservative surgery or incomplete PAIR[4].

LHA patients are generally asymptomatic or have nonspecific clinical manifestations. Diagnosis is often made due to the clinical manifestations of other complications such as acute cholangitis, peritonitis, pericarditis or bronchobiliary fistula[5]. In the days prior to diagnosis all our patients reported nonspecific and insidious symptoms such as fever, malaise, dyspnea, abdominal discomfort and a progressive and significant deterioration in their general condition. The scarcity of symptoms of LHA (compared with pyogenic liver or intra-abdominal abscess) is probably due to the action of the pericystic wall offering theoretical protection against infectious dissemination[6].

Usually, the first tool for diagnosing LHA is ultrasound. The ultrasound image of the LHA may not be characteristic, and differential diagnosis should include uncomplicated cyst type I Gharbi, liver abscess from another origin, or infected simple cyst[7]. In one of the cases reported here abdominal radiography provided important clues for diagnosis. CT was the best diagnostic method in our short series, but no evidence-based medicine information can be drawn from only three cases.

The management of LHA is not standardized. Simple surgical drainage of the cyst has been described, but this technique may need subsequent additional surgical procedures; if cyst surgery is not performed, relapse and chronic complications due to the persistence of residual cyst cavity are frequent[6]. The most widely accepted approach is non-scheduled conservative surgery, usually subtotal pericystectomy including opening of the cavity, exhaustive cleaning of the cyst, eradication of the parasite and closing of the cystobiliary fistulas. But this type of surgery could be suboptimal because the patient is often in a poor clinical condition, and in fact LHA is a risk factor for postoperative complications (especially infections) in patients undergoing surgery for LHC[8]. To our knowledge, percutaneous drainage of the cyst, supportive measures and intravenous antibiotics as a therapeutic bridge to more radical and safer surgery have not been described previously. Here we present three patients treated with this approach in whom we were able to control the infection and improve the patients’ clinical condition prior to scheduled surgery two weeks later. What is more, we were able to perform an ERCP in one of our patients with a frank intrabiliary rupture. The improved medical condition allowed us the possibility of resecting a greater quantity of cyst, thus reducing the risk of possible relapse.

To conclude, percutaneous drainage of LHA as a bridge to surgery may be a valid procedure especially in patients at high surgical risk due to septic conditions. With this approach we were able to control the infection with antibiotics and perform surgery once the patient’s overall condition had improved.

Cystic echinococcosis is a zoonotic disease that is found worldwide. It is caused by larvae of the genus Echinococcus, and is endemic in certain areas of the planet. The liver is the most common location for cyst developmen. Infection of the liver hydatid cyst (LHC) and pyogenic abscess formation is a rare but highly severe complication.

The clinical course is insidious and it is usually diagnosed when the infection has progressed. The treatment of liver hydatid abscess (LHA) is not yet standardized. Several options are available with the dual purpose of draining the LHA and treating the LHC, including simple surgical drainage, or surgical drainage associated with total or subtotal pericystectomy and percutaneous drainage.

The authors propose percutaneous drainage of the LHA as a first therapeutic step, and later, when the patient’s general condition improves, surgical treatment of the LHC.

The authors present a new therapeutical option that could let surgeons to obtain better results.