To evaluate all the references about primary gallbladder hidatidosis looking for best treatment evidence.

Eight cases of GBHC were women and seven men. One not mentioned. Median age was 48.3 years. The most frequent clinical symptom was abdominal pain (94%) usually in the right upper quadrant. Ultrasound was performed in ten patients (62.5%) but in most cases a combination of several techniques was performed. The location of the cysts was intravesicular in five patients. Five patients presented GBHC and liver hydatid cysts. Two patients presented cholelithiasis and one choledocholithiasis. The most frequent surgical technique was cholecystectomy by laparotomy (81.25%). Simultaneous surgery of liver cysts was carried out in five cases. Eleven patients did not present postoperative complications, but one died. The mean hospital stay was seven days. No recurrence of GBHC was recorded.

Hydatid disease is a zoonotic infection found all over the world, which is caused by the larval stage of parasites of the Echinococcus species. Echinococcus granulosus is the most frequent (95% of cases); other species such as Echinococcus multilocularis are rare (5%). Hydatid disease is endemic in cattle-raising regions like the Mediterranean countries, Africa, South America, Middle East, Australia and New Zealand[1,2].

Echinococcus granulosus lives in the intestine of dogs and other wild canines, which are the definitive hosts. Humans are accidentally infected via the fecal-oral route. Larval embryos pass through the intestinal wall and reach the liver through the portal system. Subsequently, through the liver and lungs, parasites reach the arterial circulation and may spread through the rest of the organs[1-3]. The larvae can remain and develop into hydatid cyst anywhere in the body, but liver (70%) and lungs (20%) are the most commonly affected sites.

Primary hydatid cyst of the gallbladder (GBHC) is an exceptional location for hydatidosis, and its pathogenesis is not completely clear. While the literature on liver hydatid disease is abundant, references to the primary involvement of the gallbladder are limited to clinical cases and so it is difficult to reach meaningful conclusions[3-16]. In this paper we present a systematic review of the literature on GBHC published to date.

We introduced the following keywords in the MEDLINE (PubMed), Tripdatabase, SciELO and Cochrane Library databases: “gallbladder hydatid disease (GHD)” and “gallbladder hydatid cyst (GHC)” without restrictions on publication date or author until 31 December 2015[17]. The first selection of papers was made after reading title and abstract, and in case of doubt, after reading the full text. A flowchart is shown in Figure 1. 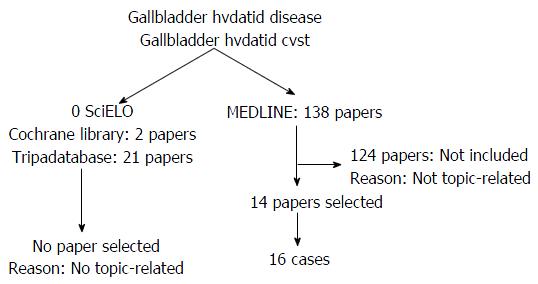 Our results were as follows: (1) zero results in SciELO; (2) 2 results for both searches (GHD and GHC) in the Cochrane Library: Neither met the inclusion criteria; (3) 21 results for GHD and 17 for GHC in Tripdatabase. After review, none were found to be related to the topic; and (4) 137 results for GHD and 138 for GHC in MEDLINE. Since the overlap between search results was 99%, we used the latter search with 138 results; of them, only 14 (10.14%) met the selection criteria for this study.

These 14 papers included 16 clinical cases covering a wide range of clinical, diagnostic and therapeutic aspects of GBHC. These characteristics are summarized in Tables 1-4.

In the next step, to assess the quality of the selected studies we used the rating scale described by Manterola et al[18], which assesses each publication individually depending on the type of study, the size of the sample and whether it is justified, and the methodology used. A mean score of all the selected studies is produced ranging from 6 to 36 points, with a quality cut-off score of 18 points. The mean score in our review was 10.3; however, due to the rarity of GBHC and the few studies of this issue published, we selected all the papers available.

We also carried out a qualitative analysis of the selected papers and their conclusions, based on the classical levels of evidence and grades of recommendation proposed in Cook et al[19] and Sackett[20].

Eight cases of GBHC were women and seven men. The sex of one patient was not specified. Median age was 48.3 years (range: 27-76). The most frequent clinical manifestation was abdominal pain (15/16) (94%) (Table 1), in the right upper quadrant in 13 patients) (81.25%), in the epigastrium in four (25%), (three of whom combined upper quadrant pain in right hypochondrium and epigastric pain), and finally diffuse abdominal pain in two (12.5%). In one case, no data on abdominal pain were included (6.25%). Three patients presented vomiting and two had nausea; no information on nausea or vomiting was reported in the rest of patients. Three patients had fever, four were fever-free, and no data on fever were available for the remaining nine patients. Four patients had jaundice, five did not, and no data were available in seven cases. As regards past medical history, two patients had been previously diagnosed with hydatid disease and one had had hepatitis.

On physical examination (Table 1), four patients presented abdominal tenderness, three hepatomegaly, two abdominal distension, and one a palpable mass. Serological information was available in only five cases (Table 2). Levels of alkaline phosphatase and bilirubin were high in four patients, normal in one, ​​and no information was recorded for the other eleven. In the cases in which they were specified, alkaline phosphatase levels were between 140 and 465 IU/L and bilirubin between 5.6 and 10.2 mg/dL. Echinococcus serology was performed in four cases, being positive in three and negative in one.

Image diagnostic methods are described in Table 2. Abdominal ultrasound (US) was performed in ten patients (62.5%), abdominal computed tomography (CT) in nine (56.25%), and magnetic resonance imaging (MRI) in three (18.75%). In most cases a combination of several techniques was performed: US + CT + MRI in three cases, US + TC in three others; so four cases underwent US alone and three CT alone. The location of the cysts was intravesicular in five patients. Five patients presented GBHC and liver hydatid cysts. Two patients presented cholelithiasis and one choledocholithiasis.

The data on therapeutic management are displayed in Table 3. One patient received preoperative albendazole for two weeks, but no data on the other fifteen were available. The most frequent surgical technique was cholecystectomy by laparotomy (81.25%), performed in 13 patients; laparoscopic cholecystectomy was performed in two cases (12.5%), in one of them a previous endoscopic retrograde cholangiopancreatography (ERCP) was done and received a biliary stent; in the last patient, cholecystectomy was not performed, only ERCP and biliary stenting (6.25%). Cholecystectomies were total in 14 cases (93.3%) and subtotal in the patient treated preoperatively with albendazole (6.7%). Simultaneous surgery of liver hydatid cysts was carried out in five cases: Cystopericystectomy in three cases, enucleation in one, and in the other the surgical technique was not specified except for the fact that access was made by thoracotomy. Eleven patients did not present postoperative complications: One presented fever, atelectasis and pleural effusion, and another multiple organ failure and death. No data regarding postoperative outcome were recorded in three cases. The pathological examination (Table 4) was performed in nine patients. In three, the presence of Echinococcus granulosus was confirmed microscopically.

The mean hospital stay was seven days (range: 1-12 d). Seven patients were treated postoperatively with varying doses of albendazole. In nine cases follow-up after the postoperative period was recorded, for a mean period of 38 mo (range: 1-120 mo); no recurrence of GBHC was recorded.

Hydatidosis is a disease caused by the larva of the genus Echinococcus, within which Echinococcus granulosus is the most common species. Although cases have been diagnosed all over the world as a result of increased intercontinental migration, areas in which the incidence is significantly higher include the Mediterranean Sea, Africa, South America, Middle East, Australia and New Zealand. Hydatid disease is prevalent in pastoral areas where cattle and dogs are in close contact. Dogs are the definitive hosts; they excrete eggs in their feces, and humans become intermediate hosts through accidental fecal-oral infection[2,21].

The reviews of Dziri et al[21,22] and Gomez I Gavara et al[1] concluded that many questions about liver hydatidosis still lack evidence-based answers. In 2016, PAIR or surgery, systematic or selective preoperative ERCP, the best surgical approach (conservative or radical), type of technique (laparoscopic or laparotomy), and the use of albendazole all remain topics for debate[1,21,22].

GBHC is an extremely rare entity, even in places where hydatid disease is endemic. Primary involvement is even less common. It is essential to differentiate primary GBHC from secondary invasion of the gallbladder caused by daughter vesicles of primary liver hydatid disease. GBHC can be located within the vesicle or on its outer surface. GBHC pathogenesis is not very well documented; one of the most accepted hypotheses is infestation through the bile duct, although this explanation is unconvincing in cases of superficial cysts, and also often requires prior hepatic involvement. Larval spread through the lymphatic system after intestinal absorption is possible and may explain the intraluminal cysts. Other routes, such as contamination of gallbladder after surgery for hepatic hydatid cyst, should also be considered[3].

In this evidence-based systematic review we have attempted to answer questions about the symptoms, diagnosis and treatment of GBHC. The main limitation is the lack of published series; all the reviewed papers are clinical cases, and so we are unable to reach an acceptable level of evidence. The most common symptom in GBHC is pain in the right upper quadrant[4-10,12-16]. Suspicion of GBHC is established by ultrasound and/or CT[3-13,15]. The involvement of the gallbladder is usually an incidental finding in patients being examined for liver hydatid cysts[4-6,8,10-12,14-16]. The most common therapeutic approach is cholecystectomy by laparotomy and postoperative albendazole[4-12,14-16], Few cases present postoperative complications, and the recurrence of hydatid disease is practically zero[3-12,15].

Primary gallbladder hidatidosis is an unfrequent disease. No systematic reviews have been done before.

Future cases and publications will have a systematic review to treat these patients.

Hydatid disease of the gallbladder is very rare, from this point of view this systematic review has some interest.