Core tip: Common bile duct (CBD) cancers frequently invade the surrounding vessels like the right hepatic artery (RHA). The arterial excision with tumor free margins followed by the reconstruction remains the mainstay treatment for a better outcome and long-term survival. Various grafts including saphenous vein, splenic artery, right gastroepiploic artery or gastroduodenal artery have been practiced for RHA reconstruction. In our case, the RHA invasion by CBD cancer was detected intra-operatively. We performed the RHA reconstruction using the autologous first jejunal artery (JA) graft. The use of first JA graft during RHA reconstruction seems to be technically feasible leading to an acceptable outcome.

Here, we report a case of advanced extrahepatic bile duct cancer invading right hepatic artery (RHA). Subtotal stomach preserving pancreaticoduodenectomy (SSPPD) accompanied by resection of RHA was performed. Arterial reconstruction was performed with the autologous first jejunal artery (JA) graft. Postoperative course was satisfactory with no complications. The first JA can be considered as an alternative graft for RHA reconstruction.

A 63-year-old male patient presented to a private hospital with a history of progressive jaundice, pruritus, and loss of appetite. He underwent computed tomography (CT) scan where bile duct stenosis from superior (Bs) to inferior (Bi) duct was evident. The patient was referred to our department for further evaluation and management.

We carried out diagnostic imagings; endoscopic retrograde cholangiopancreatography (ERCP), magnetic resonance cholangiopancreatography (MRCP), intraductal ultrasound (IDUS). MRCP displayed bile duct cancer from Bs to middle duct. ERCP showed an irregular stricture extending from Bs to Bi (Figure 1A). IDUS revealed pancreatic invasion of the tumor. However, there was no evidence of tumor invasion to the portal vein and RHA (Figure 1B) nor the CT showed any signs of RHA invasion (Figure 2). Preoperative diagnosis of CBD cancer with positive pancreatic invasion was made and SSPPD was proposed. 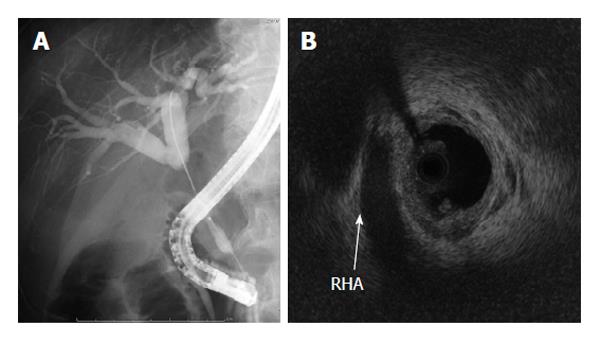 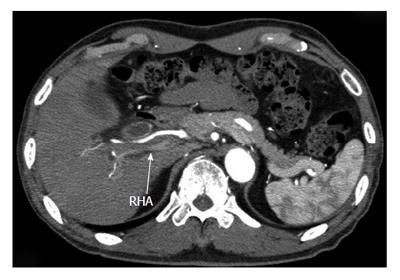 Following opening of the peritoneal cavity, ascites, liver metastasis and peritoneal dissemination were ruled out. We could palpate the hard tumor in the CBD. While scrutinizing around the hepatoduodenal ligament, we perceived that the bile duct cancer had directly invaded RHA. No invasion or metastasis to duodenum, portal vein, gall bladder, common hepatic artery or other surrounding structures were observed. After dividing RHA and CBD, we resected RHA, 2.8 cm in length. Frozen section revealed cancer cells in adventitia of RHA extending to 15 mm in depth with grossly negative stump’s margins.

The back flow from the cut end of the RHA was noted to be poor, so the collateral circulation between RHA and left hepatic artery in the hilar plate was considered to be inadequate. Preoperatively we were not prepared for RHA resection; hence, saphenous vein had not been arranged for reconstruction. We selected the first JA as an alternate graft. A graft of 2 cm from first JA was harvested after transection of jejunum. We interposed the JA in an end-to-end fashion with 7-0 prolene using interrupted suturing technique (Figure 3). Doppler blood flow study displayed a good flow in the graft at a rate of 120 mL/min. SSPPD was completed with pancreatogastrostomy and hepatico-jejunostomy. Total intraoperative blood loss was 2420 mL and time of reconstruction of RHA with first JA was about an hour. 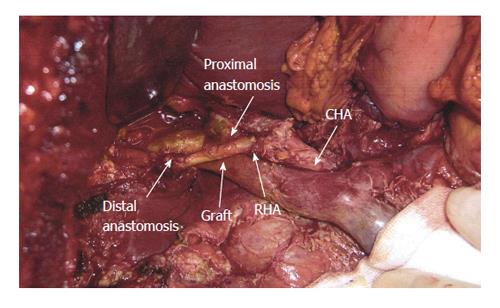 Anticoagulant therapy with heparin was started from fourth postoperative day for a week, and aspirin was continued until 6 mo after operation. Histological examination showed moderately differentiated tubular adenocarcinoma with pancreatic invasion; stage III-B (T3N1M0) (Union for International Cancer Control/UICC classification). No postoperative complications were noted. Following operation, the patient was put on adjuvant chemotherapy with Gemcitabine. After 2 years of surgery, the JA graft was noted to be patent on CT examination with no signs of stenosis. Unfortunately, the patient had evidence of recurrence with multiple para aortic lymph node metastases and died 3 years after the surgery.

The pancreatic or biliary cancers potentially invade hepatic artery either by direct extension or by lymphatic metastasis, and the invasion is sometimes detected intraoperatively. Additionally, during radical resection of the pancreatic or biliary tumors the hepatic artery may require excision to achieve tumor-free margins. Various methods for reconstruction of the hepatic artery have already been described: interposition of venous [greater saphenous vein (GSV)] and prosthetic grafts; transposition of the native arteries to the distal stump of the hepatic artery, i.e., splenic artery, right gastroepiploic artery, and even primary repair to avoid prosthetics with combined major visceral resections[5-9]. The suitable technique should be adapted in regard to the specific situation posed by the resection.

In our case, preoperative imagings including IDUS didn’t clue the hepatic artery invasion, and by the time RHA invasion was detected, RGEPA had already been resected. We decided to use the first JA for RHA reconstruction. Our concern regarding the anastomosis was a relatively small caliber of the JA. However, no broad caliber discrepancy between the graft and recipient artery made it acceptable. To our knowledge, this is the first case in the literature where JA was used as a free graft in reconstruction of hepatic artery.

The histological disparities between the wall of artery and vein with the long-term patency have been frequently discussed in context of coronary artery bypass grafting (CABG). Radial artery (RA) was introduced in 1971[10], and the use was soon discouraged for higher occlusion rates as compared to SVG. The propensity of the RA to go into spasm along with severe intimal hyperplasia contributed to poor results obtained with RA grafting[11]. At the same time the use of SVG is limited with its poor patency following intimal hyperplasia and accelerated atherosclerosis. There are growing evidences and it is now clear that SVG deteriorates with time and the occlusion rate reaches up to 50% in 10 years after CABG, mainly due to atherosclerosis in the graft called “vein graft disease”[12]. Subsequently internal mammary artery[13], internal thoracic artery[14] and RGEPA[15] grafts emerged as better choices for their markedly superior long-term patency.

Specific to JA, one review has demonstrated JA of Roux-en-Y limb being used in hepatic artery reconstruction during living related liver transplantation as an in-situ graft. The report together presents successful HA reconstruction with the JA of the Roux-en-Y limb (in pediatric living donor liver transplantation)[16]. Likewise, use of JA graft with anastomosis to neck vessels like carotid artery during pharyngo-jejunostomy has been practiced[17].

This is the first report to describe the utility of isolated JA graft in arterial reconstruction for malignant invasion. The postoperative course was uneventful, and the graft had been patent for more than 2 years.

When the use of SVG is restricted in conditions like varicose vein, vasculitis, or it has already been used for bypass conduit, as an interposition graft, or patch graft, JA can be considered as a preferable graft of choice for the RHA reconstruction. JA can also be preferred in the conditions precluding the use of other candidate vessel RGEPA, such as prior resection for gastrectomy or lymph node metastasis around RGEPA. JA graft is readily accessible, is of adequate length to access the hepatic artery, and has an adequate diameter to facilitate the anastomoses. In cases like ours when the RHA invasion is detected intraoperatively, the JA graft can ensure a fast, easy, and safe reconstruction procedure with an extendable patency. Meantime, the caliber discrepancy between the RHA and the JA should always be considered during the reconstruction.

Although SVG has been the preferred graft, this report concludes that the first JA may provide a local autologous graft for RHA reconstruction when an alternative is required.

A 63-year-old male with a history of progressive jaundice presented with pruritus and loss of appetite.

This article demonstrates the use of first JA graft in right hepatic artery reconstruction.