The mechanism of action of ribavirin (RBV) as an immunomodulatory and antiviral agent and its clinical significance in the future treatment of patients with hepatitis C virus (HCV) infection are reviewed. RBV up-regulates type 1 and/or 2 cytokines to modulate the T helper (Th) 1/2 cell balance to Th1 dominance. Examination of co-stimulatory signaling indicated that RBV down-modulates inducible co-stimulator on Th cells, which contributes to differentiating naïve Th cells into Th2 cells while reducing their interleukin-10 production. The effects on T-regulatory (Treg) cells were also investigated, and RBV inhibited the differentiation of naïve Th cells into adaptive Treg cells by down-modulating forkhead box-P3. These findings indicate that RBV mainly down-regulates the activity of Th2 cells, resulting in the maintenance of Th1 activity that contributes to abrogating HCV-infected hepatocytes. Although an interferon-free treatment regimen exhibits almost the same efficacy without serious complications, regimens with RBV will be still be used because of their ability to facilitate the cellular immune response, which may contribute to reducing the development of hepatocellular carcinogenesis in patients infected with HCV.

Core tip: Ribavirin has the potential to regulate the T-helper (Th) 1/2 cell balance into Th1 dominance by modulating the co-stimulatory signaling between antigen-presenting cells and naïve Th cells as well as the inhibitory activity of T-regulatory cells. These are considered useful in treating hepatitis C virus infection, especially to inhibit hepatocellular carcinoma development.

About 185 million people worldwide are estimated to be infected with hepatitis C virus (HCV)[1]. Eighty percent of HCV-infected patients will progress to persistent infection[2,3], and 15%-30% of these will develop cirrhosis over a 25- to 30-year period[4]. In addition, hepatocellular carcinoma (HCC) occurs in 8% of cirrhotic patients annually[5-7]. Because persistent HCV infection is closely related to the development of HCC[8,9], the elimination of HCV contributes markedly to preventing the development of this form of cancer[10,11].

The treatment strategy for HCV infection has improved during the 25 years since the introduction of interferon (IFN) therapy. In particular, the rate of persistent elimination of the HCV genotype 1, which was considered to be IFN resistant, improved markedly from 8% to 45% with the introduction of pegylated (PEG)-IFN treatment in combination with ribavirin (RBV)[12]. In addition, the administration of direct antiviral agents (DAAs) with PEG-IFN plus RBV therapy greatly improved treatment efficacy[13-15]. Currently, about 90% of persistent HCV infection can be eliminated by administering the IFN/RBV/DAA regimen.

In 2014, an IFN-free regimen featuring a combination of the HCV-NS5A inhibitor daclatasvir (DCV) and NS3/4A protease inhibitor asnaprevir (ASV) was approved. This IFN-free regimen appears to have efficacy similar to that of the previous standard regimen without serious side effects[16,17]. Thus, IFN-free regimens will play a leading role in future HCV treatment. However, the potential of RBV to modulate the immune response is considered useful in treating HCV infection, especially to inhibit HCC development[18-22]. This paper reviews the immunological activity of RBV and considers the clinical significance of this antiviral agent in future HCV treatment.

IMPORTANCE OF THE HOST CELLULAR IMMUNE RESPONSE IN ELIMINATING HCV

Abrogation of infected cells is necessary to eliminate persistent viral infection, and up-regulation of the host cellular immune responses triggered by the activation of T helper (Th) 1 cells is thought to be essential for eliminating persistent HCV infection[23-26]. Among the various mechanisms by which IFN eradicates viruses, modulation of the host immune system may be critical, along with its antiviral activity[27]. IFN could enhance host immune responses via the activation of natural killer cells, CD4+ Th cells, and CD8+ cytotoxic T cells and the up-regulation of major histocompatibility complex molecule expression to stabilize the presentation of antigeneic epitopes from the infected cells[28]. Unfortunately, although it has these abilities for modulating immune systems, IFN monotherapy shows only limited efficacy against HCV infection. Numerous investigations have attempted to elucidate why IFN alone fails to eliminate HCV, and it appears that HCV can escape[29] or inhibit[30] the host immune response to establish persistent infection. Hence, additional techniques were needed to enhance the host cellular immune response.

EFFECTS OF RBV ON THE TH1/2 CELL BALANCE

The synthesized purine nucleotide analogue RBV, developed as antiviral reagent[31,32], is well known to contribute to HCV elimination in combination with IFN[33]. The mechanism of action of RBV is not fully understood, and it has been reported to: (1) induce viral RNA-error catastrophe[34]; (2) inhibit RNA polymerase[35]; (3) reduce RNA pooling via nicotinamide adenine dinucleotide phosphate inhibition[36,37]; and (4) alter the Th1/2 balance to Th1 dominance[38,39]. Among the putative mechanisms of the enhancement of viral elimination by RBV, it is notable that RBV polarizes the Th cell balance into Th1 cell dominance because this supports the importance of the activation of the host cellular immune response in eliminating HCV. However, it remains unclear how RBV modulates the Th1/2 balance. Many groups examined the effects of RBV on type 1 and 2 cytokine production from T lymphocytes. Some reported that RBV directly up-regulates Th1 cells through the activation of type 1 cytokines, such as interleukin (IL)-12[40-42]. In contrast, others indicated that RBV may maintain Th1 cell activity through interference with immunosuppressive cytokines such as IL-4 or IL-10[43-46]. From the viewpoint of type 1 and 2 cytokine profiles, it remains controversial whether RBV up-regulates Th1 cells directly or indirectly through the inhibition of Th2 cell activity.

The importance of co-stimulatory signaling to determine the differentiation of naïve Th cells into Th1 or 2 cells is well established[47]. The signaling from CD80 on professional antigen presenting cells (APCs) to its counterreceptor CD28 on CD4+ T cells promotes differentiation of naïve Th into Th1 cells[48]. On the other hand, the signaling from B7-H2 on APCs to its counterreceptor inducible co-stimulator (ICOS) on CD4+ T cells promotes differentiation into Th2[49]. It would be interesting to determine whether RBV exerts specific effects on co-stimulatory signaling, although only a few reports have addressed this aspect. Cheng et al[50] reported that CD28 was up-regulated by IFN plus RBV therapy in both treatment responders and nonresponders. Atsukawa et al[51] demonstrated that RBV down-modulates ICOS on human CD4+ T cells, which is associated with decreased IL-10 production. They also examined the modulation of type 1/2 cytokine fluctuations in the small cohort of patients who received IFN plus RBV treatment and their results indicated that IL-10 production from CD4+ T-cells was decreased in patients whose ICOS were down-modulated by the therapy, which was closely associated with persistent HCV elimination without changing CD28 expression and IFN-γ secretion levels. These results indicated that RBV mainly contributes to inhibiting the differentiation of naïve Th cells into Th2 cells to maintain the activity of Th1 cells by inhibiting stimulation-inducible molecules on the surface of CD4+ T cells. However, these results do not fully explain the role of RBV because other important factors play a role in Th1/2 cell modulation.

It is well known that the activation of host T-regulatory (Treg) cells is critical to allow persistent HCV infection[52]. Treg cells, found at first as antigen-specific inhibitors of autoreactive T lymphocytes[53,54], can identify as CD4+CD25+, and intracellular forkhead box-P3 (FOXP3)-expressing T cells. Subsequent detailed examinations revealed that the Treg family includes various subpopulations such as naturally occurring Treg (Trnat), adaptive Treg (Tradapt), Treg, and Th3 cells[55-58]. Trnat cells differentiate in the thymus and exhibit inhibitory activity against autoreactive Th cells in a cell contact-dependent fashion, which plays an important role in regulating the autoimmune response[59]. Tradapt cells differentiate from naïve Th cells under the influence of Trnat cells in the periphery and exhibit inhibitory activity in a humoral element-dependent fashion[60]. The orchestration of these Treg cells could modulate antigen-specific Th1 activity in the later phase of exogenous pathogen infections to switch the dominant immune response from cellular to humoral[61]. These phenomena play a role in the termination of excessive activation of the Th1 response against exogenous antigens[62]. In addition, Tr1 and Th3 cells exhibit inhibitory activity against Th1 cells in a humoral element-dependent fashion[56-58].

Based on these findings, RBV may indirectly maintain and/or up-regulate Th1 activity by inhibiting the differentiation of naive Th cells into Th2 cells. The potential to down-modulate the inhibitory activity of Treg cells would be closely associated with this regulatory cascade. The potential mechanism by which RBV modulates the Th1/2 balance-regulatory cascade is shown in Figure 1. Because both ICOS and FOXP3 are enhanced after cell stimulation, it is also possible that RBV affects the expression of these inducible factors. Further studies are needed to elucidate how RBV is associated with these intracellular signaling pathways. 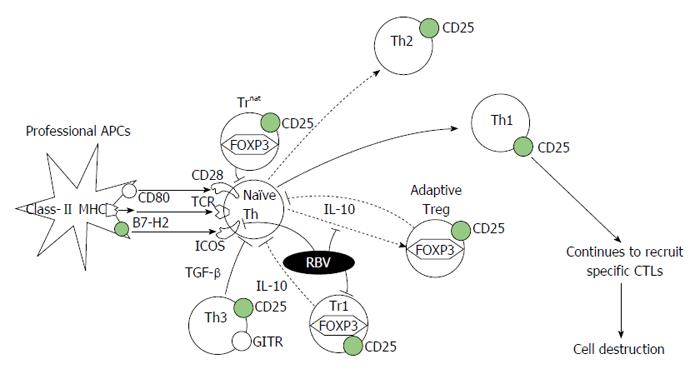 The results of various studies indicated that RBV affects intracellular signaling, contributing to the elimination of HCV. However, it remains unclear how RBV modulates intracellular signaling to inhibit the differentiation of Th cells into Tradapt cells. Some investigators reported that RBV promotes signal transducer and activator of transcription (STAT) 1 and 3 phosphorylation[68,69]. In addition, overexpression of STAT-3 in suppressor of cytokine signaling (SOCS)-1-knockout murine Treg cells led to the down-modulation of FOXP3 expression[70]. Although no report directly demonstrated the relationship between SOCS-1 and FOXP3, one possible hypothesis is that RBV promotes STAT3 phosphorylation via interference with SOCS1, which leads to the suppression of FOXP3, with resultant inhibition of the differentiation of naïve Th cells into Tradapt cells. RBV can also reduce intracellular RNA pooling by suppressing inosine-5’-monophosphate dehydrogenase activity[71], which appears to support this hypothesis.

CLINICAL USEFULNESS OF RBV IN THE FUTURE TREATMENT OF HCV

As described above, the agonistic effects of RBV on the cellular immune response plays a major role in the elimination of HCV-infected hepatocytes in combination with IFN and protease inhibitors. Because this effect will promote the autoimmune response, therapeutic regimens featuring RBV may be not recommended for patients with certain autoimmune disorders. On the other hand, because the role of the cellular immune response is important in cancer immunological surveillance, this ability of RBV may be indispensable to protect HCC development after eliminating HCV. However, IFN-free regimens will be the main strategy for the treatment of HCV infection in the near future because their efficacy in eliminating the virus is equivalent to that of IFN-based regimens without serious complications. Although it is still controversial whether IFN-free regimens can protect against HCC to the same degree as IFN and RBV-based regimens, serum alpha-fetoprotein levels were reduced in patients administered the DAA regimen featuring DCV and ASV, indicating that IFN-free regimens could also decrease the rate of HCC development. Therefore, the clinical significance of RBV-featuring regimens will be limited. However, it is still interesting whether combining RBV and DAA therapy can decrease the development of HCC more. Large-scale clinical studies will be needed to establish the efficacy of RBV for protecting HCC.

This review of the potential of RBV as a modulator of the Th1/2 balance cascade indicates that the agonistic effects of this antiviral agent on Th1 activity contributes greatly to the elimination of HCV in combination with IFN and protease inhibitors. In addition, it is possible that RBV may assist in the prevention of HCC development by accelerating cancer immunological surveillance.