AIM: This study was undertaken to evaluate the hepatic effects of silybum marianum on non alcoholic fatty liver disease (NAFLD).

METHODS: In 72 patients affected by NAFLD, main metabolic, hepatic and anti-inflammatory parameters were assayed after 3 mo of a restricted diet and before silymarin treatment (twice a day orally). The brightness of liver echography texture (hepatorenal ratio brightness) was also defined at same time. These evaluations were repeated after 6 mo of treatment.

CONCLUSION: The obtained results indicate that silymarin appears to be effective to reduce the biochemical, inflammatory and ultrasonic indices of hepatic steatosis. Some parameters indicative of early stage of atherosclerosis were also lowered.

Non alcoholic fatty liver disease (NAFLD) consists of a spectrum of conditions ranging from a simple fatty infiltration to steatohepatitis, fibrosis and cirrhosis. NAFLD is histologically similar to alcoholic liver disease, but without a history of ingesting significant amounts of ethanol. It produces few symptoms but can have evidence of fat in the liver on ultrasound[1-3] and hepatocellular fibrosis and/or inflammation evidenced by some biochemical tests. Obesity, type 2 diabetes mellitus and hyperlipidemia are often associated with NALFD[4-7]. These aspects may coexist with insulin resistance[8-10]. In turn, insulin resistance may lead to endothelial dysfunction and systemic hypertension and may induce an abnormal lipid profile. All these changes may promote the development of atherosclerotic vascular disease, even if the increased values of insulin resistance may be responsible for metabolic syndrome (MS) only.

Several medications have been proposed as NAFLD therapies, such as Metformin[11], Peroxisome proliferator-activated receptor-γ agonists[12] and Ezetimibe[13]. Silymarin (a mixture of at least 4 closely related flavonolignans, 60% to 70% of which is a mixture of 2 diastereomers of silybin) also demonstrated antioxidant properties, through stimulation of polymerase and RNA transcription, by protecting the cell membrane from radical-induced damage and blocking the uptake of toxins. Studies performed in patients with liver disease have shown that silymarin increased superoxide dismutase activity of lymphocytes and erythrocytes. In addition, it has been shown to increase patient serum levels of glutathione and glutathione peroxidase[14]. In a previous report, silymarin treatment was associated with a reduction of insulin resistance and a significant decrease in fasting insulin levels, suggesting an improvement of the activity of endogenous and exogenous insulin[15]. In another study, silymarin extract caused an improvement in serum alanine aminotransferase (ALT) levels. Hajaghamohammadi et al[16] demonstrated that silymarin decreased serum aspartate aminotransferase (AST) levels. Federico et al[17] showed that a new silybin vitamin E complex improves insulin resistance and liver damage in patients with NAFLD. More recently, Hasjiani et al[18] found that in two patient groups receiving silymarin and Vitamin E, respectively, the AST and ALT serum levels significantly decreased.

In this study, we evaluated the effects of a mixture of silybum marianum (silymarin), vitamin B12, vitamin E (Epaclin) and a restricted diet on NAFLD patients.

From January 2010 to June 2011, 72 subjects (40 male and 32 female) with a mean age of 44 ± 3.2 years were selected. Exclusion criteria were ethanol intake > 20 g/d and the customary ingestion of drugs known to produce fatty liver disease, such as steroids, estrogens, amiodarone, tamoxifen or other chemotherapeutic agents. Viral hepatitis was excluded by the negative results of hepatitis B surface antigen and anti-hepatitis C virus tests. Hemochromatosis, autoimmune hepatitis, Wilson’s disease and other hepatic diseases were also ruled out. After three months of a restricted diet, a food supplement containing Vitamin E, L-gluthatione, L-cysteine, L-methionine and silybum marianum (Epaclin 3.5 g) was given twice a day (as packet) in all selected subjects. Homeostatic model assessment insulin resistance (HOMA-IR)[19], total cholesterol (in mg/dL), high density lipoprotein (HDL)-C, low density lipoprotein (LDL)-C, triglycerides and fasting plasma glucose were evaluated at baseline and after six months of treatment. Steato test, ALT, AST with their ratio serum levels (ALT/AST) and γ-glutamyl peptidase (γ-GT) were also measured, both in basal conditions and after 6 mo. In addition, serum levels of tumor necrosis factor-α (TNF-α) were defined both at baseline and after silymarin treatment (6 mo). Finally, the hepatorenal brightness ratio was defined at the entry of the study and after 6 mo, using the sonographic brightness difference of the hepatorenal index[20].

An iE-33 ultrasonographic machine (Philips, Amsterdam) with a 3.5 MHz phased array convex transducer was used to verify the possible presence and the degree of hepatic steatosis. All subjects were evaluated in the left lateral recumbent position of 15°-20° to see the liver parenchyma and the right kidney cortex was seen contemporaneously. The brightness of both zones was examined. The liver was recorded from the intercostal space, posing the region of interest (ROI) (of 1.5 cm × 1.5 cm) in the mid or anterior axillary line (seventh or eighth intercostal space). The right kidney was evaluated, posing the ROI (0.5 cm × 0.5 cm) in the cortical zone[20]. Normal liver echo texture was considered as the absence of steatosis, as shown in Figure 1. In this case, the hepatorenal brightness ratio was 1. Mild steatosis was diagnosed for hyperechogenic liver tissue (compared with the kidney cortex) when the sonographic index results were between 1 and 2. Values between 2 and 2.5 were indicative of moderate liver steatosis. Finally, hepatic steatosis was judged as severe when the hepatorenal ratio was > 2.5. In each case, the calculation of the hepatorenal index was repeated at least twice. The main demographic, metabolic, serum liver indices and ultrasonographic data recorded at baseline and after 6 mo of treatment are reported in Table 1. 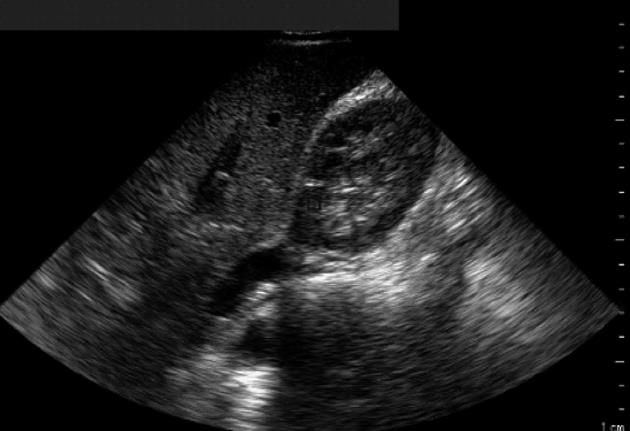 Calculations were performed as paired data, by comparing the biochemical (metabolic and serum liver-indices) values recorded at baseline and after 6 mo. Continuous variables are presented as mean ± SD. P < 0.05 was considered statistically significant for analysis. The degree of the liver echogenicity and the hepatorenal index recorded in basal conditions and at the end of treatment (6 mo) were also compared. All calculations were made using SPSS Version 13.0 for Microsoft Windows.

NAFLD is the most common silent liver disease worldwide, marked by fat accumulation in the liver (steatosis)[21] and alterations in liver biochemical tests occurring in those who do not consume high amounts of alcohol. The prevalence of NAFLD in western countries is estimated to be 20%-30%[22,23]. Current guidelines recommended liver biopsy for diagnosis, that is the “gold standard” for quantification of hepatic steatosis associated with NAFLD[24]. However, it is hard to be accepted due to its invasiveness and a significant degree of sampling error. In addition, it is invasive, costly and prone to complications[25,26].

In our experience, NAFLD is associated with insulin resistance (HOMA-IR). Previous studies demonstrated that insulin resistance almost universally induces NAFLD[27,28]. It is known that this condition may precede the development of cardiovascular disease[29,30]. To confirm the connection between NAFLD and atherosclerosis, carotid atherosclerosis has recently been detected in patients with NAFLD[31]. Pathogenetic mechanisms responsible for that include an increased lipolysis and increased delivery of free fatty acids to the liver[32]. Other abnormalities that can contribute to fat accumulation in the liver include decreased synthesis of apolipoproteins and microsomal transfer protein gene polymorphism, both conditions that lead to decreased export of triglycerides out of the liver[33]. We also found an increased value of Steato test at baseline that significantly reduced after 6 mo of silymarin and a restricted diet. It is known that the test (score from 0 to 1) gives a quantitative estimation of steatosis of different origins. The behavior of the Steato test in patients with NAFLD is more important than ultrasonography for noninvasive diagnosis of steatosis and may reduce the need of liver biopsy, particularly in patients with other risk factors[34]. Mild to moderate elevation of serum aminotransferases (ALT and AST) found in our subjects at baseline represents the most common abnormality found in patients with NAFLD[1]. Their serum levels significantly reduced after diet and silymarin treatment. Unlike those with alcohol-induced steatohepatitis (who typically manifest disproportionate increases in the ALT level), patients with NAFLD usually have an AST/ALT ratio < 1 because the ALT level is higher than AST in NAFLD[35]. On the contrary, the AST/ALT ratio tends to increase with the development of cirrhosis, thus losing its diagnostic accuracy[36]. The reduction both of AST and ALT (with AST/ALT < 1) after silymarin treatment seems due to the antioxidant effect of silybum marianum that is also able to protect the liver against toxins. Previous studies also demonstrated that silymarin acts as a cytoprotectant, anticarcinogenic and supportive agent for liver damage from Amanita phalloides poisoning[37,38]. Mean serum levels of γ-GT were above the normal limits in selected subjects with NAFLD. That is due to obesity, hyperinsulinemia, oxidative inflammation and changes in hepatocyte membrane permeability[39]. In our study, silymarin was demonstrated to reduce its high serum levels, probably for stabilization of the hepatocyte membrane structure, thereby preventing toxins from entering the cells. This happens through enterohepatic recirculation and by promoting liver regeneration. A previous study demonstrated that this happens by stimulating nucleolar polymerase A and increasing ribosomal protein synthesis[40]. TNF-α was also reduced after silymarin therapy, as a consequence of the anti-inflammatory action of the drug. This clearly demonstrated a reduction of the hepatic inflammation. Finally, the changes of hepatorenal brightness index clearly demonstrated the reduction of hepatic fat accumulation after silymarin therapy. From this point of view, although several techniques can be used to assess liver steatosis, ultrasonography represents the most commonly used method for this[20]. It can be assessed by hyperechogenicity of liver tissue (“bright liver”) compared to the echogenicity of the kidney cortex (hepatorenal contrast). The ultrasound index is the main noninvasive imaging modality for the evaluation of hepatic steatosis[41-43]. The sensitivity of ultrasonography in detecting steatosis is between 60% and 90%[44], even if it is difficult to identify the inflammatory liver findings. It is also difficult to differentiate steatosis from steatohepatitis[45].

In conclusion, the results obtained indicate that silymarin seems to be effective in reducing the biochemical and ultrasonographic changes induced by NAFLD. These results are in agreement those obtained by other authors[46]. A pilot study performed in patients with NAFLD confirmed an improvement in liver enzymes and insulin resistance when a complex of silybin, vitamin E and phospholipid was given[47]. The effects of silybum marianum and vitamin E on some biochemical indices of atherosclerotic progression must be confirmed by other experiences performed on a wide range, even though these metabolic data may be reported, not only for atherosclerosis, but also for MS alone.

Studies performed in patients with liver disease have shown that silymarin increased superoxide dismutase activity of lymphocytes and erythrocytes. In addition, it has been shown to increase patient serum levels of glutathione and glutathione peroxidase.

The results obtained indicate that silymarin seems to be effective in reducing the biochemical and ultrasonographic changes induced by non alcoholic fatty liver disease (NAFLD). The effects of silybum marianum and vitamin E on some biochemical indices of atherosclerotic progression must be confirmed by other experiences performed on a wide range, even though these metabolic data may be reported, not only for atherosclerosis, but also for metabolic syndrome alone.

In this study, the authors evaluated the effects of a mixture of silybum marianum (silymarin), vitamin B12, vitamin E (Epaclin) and a restricted diet on NAFLD patients.

This is a nice piece of work that addresses the effects of a mixture of vitamin B12, vitamin E and silybum marianum in improving the syndrome related to NAFLD and/or atherosclerosis. This manuscript is acceptable for publication.