RESULTS: BCS was mainly caused by thrombophilic (33%) or myeloproliferative (19%) disorders. Forty-three percents had symptoms for less than one week with ascites as the most prevalent finding. Fourteen (67%) were treated with TIPS and 7 (33%) were manageable with treatment of the underlying condition and diuretics. The median follow-up time for the TIPS-treated patients was 50 mo (range 15-117 mo), and none required subsequent liver transplantation. Ascites control was achieved in all TIPS patients with a marked reduction in the dose of diuretics. A total of 14 TIPS revisions were needed, mostly of uncovered stents. Two died during follow-up: One non-TIPS patient worsened after 6 mo and died in relation to transplantation, and one TIPS patient died 4 years after the TIPS-procedure, unrelated to BCS.

Budd-Chiari syndrome (BCS) is caused by an obstruction of the hepatic venous outflow and presents with a variety of clinical patterns from sub-clinical disease to acute liver failure[1]. The obstruction can occur anywhere from the small hepatic veins to the right atrium of the heart. In western countries, it is most often caused by thrombosis, whereas in Asia and Africa, a membranous obstruction accounts for the majority of cases[1,2]. Register-based studies from Nordic countries report incidences of 0.5-0.8 per million per year[3,4].

The hepatic outflow obstruction results in portal hypertension and sinusoidal congestion with ischaemic hepatocyte dysfunction. This causes the dominant clinical features of abdominal pain, hepato- and splenomegaly, ascites, and oesophageal varices and the development of fulminant hepatic failure. In half of BCS patients, symptom duration is less than one month[5,6].

Due to the rarity of BCS, there are no randomised clinical treatment trials. The usual treatment is a stepwise strategy with anti-coagulants, correction of risk factors, use of diuretics and drugs aiming at the reduction of portal pressure, angioplasty for short-length venous stenoses, transjugular intrahepatic portosystemic shunt (TIPS), and ultimately liver transplantation[7,8]. Rapid TIPS treatment with decompression of the portal hypertension and sinusoidal congestion is reported to dramatically change the overall transplant-free survival of BCS patients[9-13].

The aim of the present study was to present a single-centre long-term clinical experience and outcome of BCS after the establishment of TIPS treatment.

Twenty-one patients with BCS (ICD-10: I82.0) were referred to our department from January 1997 to December 2008. Two patients came from Norway, one from Latvia, and the 18 Danish patients came from the 1.8 million catchment population of Aarhus University Hospital. All data were retrospectively collected from hospital records and laboratory databases.

The immediate clinical management consisted of anticoagulation, diuretics and treatment of any underlying haematological or endocrinological disease. The patients were tested for haematological and hypercoagulative disorders including the JAK2 tyrosine kinase mutation in the most recent cases.

As of January 1997, we implemented TIPS treatment and offered it to the patients who could not be managed by medical treatment. In the early years, bare stents were inserted [Smartstent (n = 5) (Cordis Corporation - Johnson and Johnson Medical N.V./S.A., Waterloo, Belgium), Luminexx (n = 1), or Memothermstent (n = 1) (Bard Denmark AB, Helsingor, Denmark)] and since 2002 the majority of the stents were covered [polytetrafluoroethylene (PTFE)-covered Viatorr stents (n = 8) (W. L. Gore and Associates GmbH, Putzbrunn, Germany)].

Descriptive statistics are presented as median and range. The Kaplan-Meier algorithm was used to describe survival. P < 0.05 was considered statistically significant.

The diagnosis of BCS was based on imaging techniques supported by clinical, biochemical, and pathological findings. Ultrasound (US) was the primary imaging technique (n = 18), followed by computer tomography (CT) (n = 11) and magnetic resonance imaging (MRI) (n = 1). One patient had secondary BCS with an angioleiomyosarcoma in the inferior caval vein. Half (54%) of the patients tested had an identifiable hypercoagulable condition.

Fourteen patients (67%) were treated with TIPS and six patients (29%) were controlled with pharmacological therapy. Two patients died during follow-up: One patient was responding well to medical treatment for 6 mo but suddenly developed acute liver failure and died from liver transplantation related complications. The other patient died (71 years old) 4 years after TIPS, from causes unrelated to BCS (multi infarct dementia and lung embolus).

The 14 patients treated with TIPS experienced no procedure-related complication, and their portocaval pressure gradient was lowered to less than 10 mmHg in all cases (Figure 1). The need for diuretics was substantially reduced or eliminated (n = 4) post-TIPS (Table 2). 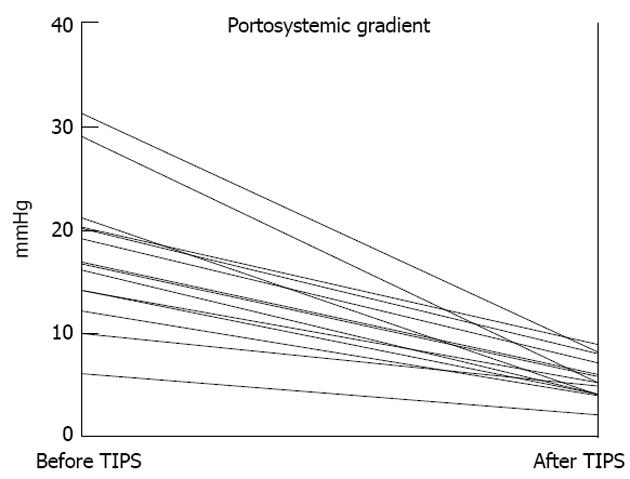 The TIPS patients were followed up every 6-12 mo with blood tests and ultrasound-Doppler examination to secure TIPS patency. The median follow-up time was 50 mo (range 15-117 mo). The blood tests improved after TIPS and then remained stable (Table 3). The patients’ estimated 5-year survival was 88%. 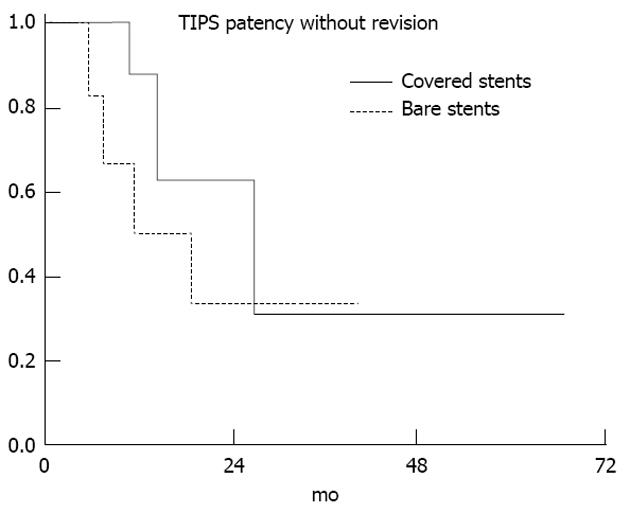 Figure 2 Transjugular intrahepatic portosystemic shunt patency without interventional revision (Kaplan-Meier method). In the bare stents group 3 patients needed 3 revisions each. More than one revision does not affect the calculation of this graph, thus the total need of revisions in the bare stents group is considerably underestimated in this graphic representation (P = 0.47). TIPS: Transjugular intrahepatic portosystemic shunt.
DISCUSSION

We have reported results from a cohort of 21 BCS patients of which 14 were treated with TIPS and had a 5-year survival rate of 88%. No TIPS patient required liver transplantation. Seven patients were controlled with medical therapy alone and one of them developed liver failure and died in relation to transplantation. Eight TIPS-treated patients required 14 TIPS revisions, mainly during the first 2 years post-TIPS and primarily in bare stents. Our treatment results are comparable with those reported from other centres[10,13,14].

We estimated an incidence of primary BCS of approximately 0.8 million/year in our region, similar to results noted in register-based Nordic studies[3,4].

Stent patency is an important aspect of TIPS treatment, not at least in the BCS patients. We found that the introduction of the PTFE covered stents doubled the 2-year TIPS patency rate, from 33% to 63%. Another study reported an even larger increase, from 12% to 56%[17]. With the covered stents, the long-term TIPS patency in BCS seems to be the same as in cirrhosis patients[18]. Previous TIPS treatment does not influence patient or graft survival in BCS patients undergoing liver transplantation due to acute liver failure[19]. The introduction of TIPS has markedly reduced the need for donor livers for BCS patients, thus saving these grafts for other patients[11,20].

Symptom duration in BCS is often short[21], and the condition may rapidly deteriorate[22]. Therefore, and because of the complexity of correct BCS diagnosis and treatment, we suggest that patients with newly developed tense ascites in a previous liver healthy subject should immediately be referred to a liver transplant centre with TIPS experience.

Non-invasive imaging techniques (US, CT or MRI), and especially US, are excellent tools in most cases for the diagnosis of BCS[23-25]. The diagnostic finding is absence of flow in the hepatic veins and enlargement of the caudate lobe. US and/or CT were the primary diagnostic imaging method used for the majority of patients in the present study. A liver biopsy is not necessary for diagnosis in classic cases but will exhibit centrilobular fibrosis or necrosis, congestion, distended sinusoids, and in long standing cases bridging fibrosis or cirrhosis[7,23]. Invasive procedures with hepatic venography may visualise the extent of hepatic vein obstruction[25,26].

The most common aetiologies to BCS are haematologic or thrombophilic disorders that result in a thrombogenic state. Only 7 of 21 patients (33%) did not present such identified aetiologic features and one patient had more than one aetiology. This supports current recommendations for a full and systematic haematologic and thrombophilic work-up in all patients, even if one primary risk factor is identified[6]. Our proportion of BCS without identified aetiology may partly be due to the limited diagnostic tools available in the beginning of the study period (e.g., no detection of the JAK2 mutation). A complete testing repertoire has reduced the proportion of BCS without aetiology from 30% to 5%-15% and there is often identified more than one risk factor[27,28]. In a large series of 160 patients, at least one thrombophilic disorder was identified in 84%, and 46% presented with 2 or more disorders. Overt myeloproliferative disease or the JAK2 mutation, a marker for latent myeloproliferative disease, was present in 39% of patients. Oral contraceptives and systemic diseases may also be involved[6].

Because of this frequent occurrence of such thrombogenic risk factors, anti-coagulative treatment is currently recommended for all patients in absence of major contraindications[7]. However, there is still little direct evidence to support the efficacy of the treatment. One historical study showed an increase in 5-year-survival rate from 50% to 75% from 1970 to 1985 and attributed the increase to the introduction of oral anticoagulation therapy[29]. In our study, all the 17 patients with constitutional risk factors received permanent anticoagulation therapy.

In conclusion, the rare and life-threatening disease BCS can in most cases be treated with rapid establishment of a TIPS, leading to a very satisfactory survival probability and much reduced need for liver transplantation. Therefore, patients suspected of BCS, including patients with acute tense unexplained ascites, should be referred without delay to a liver centre with a TIPS programme.

Budd-Chiari syndrome (BCS) typically affects younger to middle aged persons (median age 40 years). BCS is present when the blood drainage from the liver is obstructed, most often caused by thrombosis. The disease is rare (approximately 1 per million per year) but historically has had a grave prognosis with an expected median survival of 1 year after the diagnosis. Over the last decades survival has improved drastically as new medical and interventional treatment options have been introduced.

Transjugular intrahepatic portosystemic shunt (TIPS) was introduced to treat patients with cirrhosis and portal hypertension. Several studies have reported promising results with the use of TIPS in BCS patients as alternative to shunt surgery or liver transplantation when the disease is not controlled by medical treatment alone.

TIPS has been used since 1990s and reports of long-term results show promising results. In the early days bare metal stents were used but often complicated by stent thrombosis with need for intervention. The introduction of covered stents has improved long-term stent patency and reduced the need for interventions.

The study support the growing evidence that TIPS in BCS show stable long-term results as qualified by liver function test and ultrasonography. BCS patients must be evaluated by a multidisciplinary team with expertise in vascular liver disorders, including transplant surgeons. No randomized controlled trials exist so data are based on descriptive cohort studies and expert recommendations.

It is an important report on the TIPS experience in BCS and is well-written.