Hepatectomy remains the only curative treatment for many primary and secondary liver cancers. Portal vein embolization (PVE) has been used to increase the volume of the future liver remnant and thus lower the risk of small-for-size syndrome and postoperative liver failure. This technique has proven its safety, with a low post-procedure morbidity rate. Here, we describe a very rare case in which a young patient suffered a glue embolism to the right atrial cavity following PVE in preparation for a major hepatectomy for colorectal metastasis. The foreign body was withdrawn from the heart with a femoral, percutaneous device and trapped against the wall of the femoral vein with a self-expanding metal stent. Our report shows that this previously unknown complication of PVE can be resolved without recourse to sternotomy and open heart surgery.

Portal vein embolization (PVE) is used to induce liver hypertrophy prior to a major hepatectomy and thus to lower the risk of postoperative failure associated with an insufficient future liver remnant (FLR) volume. Ever since Makuuchi et al[1] described the first PVE in 1984, this type of preoperative management has proven itself to be effective and has been adopted worldwide. In a meta-analysis of 37 studies, Abulkhir et al[2] reported post-PVE percentage increases in the FLR ranging from 8% to 27%. This enables many supposedly unresecable patients to become resecable after PVE.

Despite the good overall safety of PVE as also emphasized in the meta-analysis[2], complications do still occur. These notably include liver hematoma, liver abscesses, cholangitis and also problems related to overflow of embolization glue into the non-embolized liver. Indeed, main or left portal branch thrombosis have been described as major complications resulting from this type of foreign body embolism[2].

The present clinical case report highlights atrial glue embolism as a complication of PVE and describes the management of this rare event. The frequency of post-PVE glue embolism has not been reported but the physician should bear in mind that percutaneous treatment is possible.

A 31-year-old man was referred to our unit for further evaluation of a left colon cancer with synchronous bilobar hepatic metastases. After colectomy, the patient was proposed a two stage hepatectomy. The first stage consisted of the resection of four metastases in the left lateral section. The patient was then scheduled for PVE in order to increase the left lateral section volume and a right extended hepatectomy. The procedure was complicated by the patient’s portal anatomy. The radiologist was eventually able to access the right portal branch by puncturing the left branch and then injecting a 1:1 mixture of n-butyl-2-cyanoacrylate (NBC, Histoacryl®, B Braun, France) and Lipiodol® (Guerbet, France). Embolization of the right posterior branch was problem-free. At the beginning of the embolization procedure for the right anterior branch, the entire embolization mixture passed through a portosystemic shunt that had not been seen in the previous portography. The glue passed through a hepatic vein into the vena cava and then into the right atrial cavity (Figure 1). An emergency cardiac echoendoscopy examination confirmed the presence of a mobile foreign body in the right atrial cavity, with a high risk of pulmonary embolism. After a multidisciplinary staff meeting, we ruled out surgical management because of the risk of potential morbidity and decided to attempt percutaneous treatment. 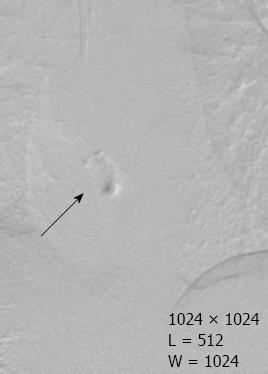 An 8F basket catheter was introduced into the right femoral vein and pushed through the vena cava into the right atrial cavity. The foreign body was captured (Figure 2) and pulled through the vena cava and the right femoral vein. Because of the risk of fragmentation of the foreign body during extraction, a self-expanding Nitinol stent (Smart®, Cordis, Issy les-Moulineaux, France) 14 mm in diameter and 6 cm in length waDr. a second puncture situated a few centimeters below the first one. The two first centimeters at the proximal edge of the stent were opened before the basket catheter opened, in order to release the foreign body without embolic event. Then the stent was fully implanted and was covering the glue and the embolic material that was pushed against the vein wall. At the end of the procedure, final angiogram showed blood flow into the prosthesis with no signs of thrombosis (Figure 3). Cardiac echoendoscopy confirmed the complete removal of the foreign body. The endovascular intervention was complicated by a groin hematoma that required a compression bandage but resolved spontaneously without any transfusion and increase of hospitalization stay. There was no edema of the leg or other vascular complications. The patient was discharged on day 3 with an anticoagulant treatment (enoxaparin sodium, 4000 IU/d) for a month because of the risk of cancer-related thrombosis. 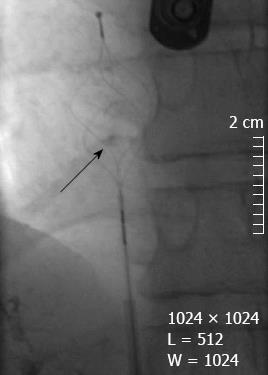 Figure 2 Material withdrawal through the vena cava with a basket catheter (arrow).

Figure 3 Femoral stent placement. The stent pressed the portal vein embolization material against the wall of the femoral vein (circle). Note the good venous flow at the end of the procedure.

Given that the PVE had not been completed, the patient could not be operated on; extended hepatectomy was considered to be unsafe in the absence of sufficient hypertrophy of the FLR. He received palliative chemotherapy and died 29 mo later from cerebral metastasis.

In this case report, NBC was used to embolize the right portal vein. Although this substance is used routinely for PVE in safe conditions[3], it is friable and was reportedly responsible for a pulmonary embolism following gastric variceal obliteration in cirrhotic patients[4]. There are two possible mechanisms for the migration of PVE material. The first relates to a spontaneous, intrahepatic portosystemic venous shunt that, although rare, has been already described a few times[5]. The second possibility is the creation of an iatrogenic portosystemic venous shunt by high pressure injection of the NBC; however, this entity has not been yet described in the literature.

In the present case, our decision to use a percutaneous technique to retrieve the migrated material was prompted by two factors. Firstly, sternotomy and open heart surgery for foreign body extraction had a high risk of morbidity. Secondly, a cardiopulmonary bypass was ruled out because the required doses of anticoagulant and the multiple attempts to access the left portal branch for PVE would have been associated with a high risk of liver subcapsular hematoma.

Extraction of material from the right cardiac cavity using a basket catheter has already been described. This technique was used for extraction of thrombi in patients contraindicated for surgery, with the placement of an inferior vena cava filter above the thrombus[6]. Lastly, given the high risk of fragmenting the PVE material during its extraction from the femoral vein, a femoral stent was used to trap the material against the vein wall and enlarge the vein. Anticoagulation was used to reduce the risk of venous thrombosis that could be potentialized by cancer (Figure 3). Venous stenting has already been reported and has proven its efficacy[7].

In conclusion, we have described a very rare case of a PVE material migration to the right atrial cavity. The embolism was successfully treated by withdrawal with a basket catheter and then femoral venous stenting. The mechanism of portosystemic venous shunting in this case was not clear but our report should prompt the physician to examine the patient’s portal anatomy even more carefully prior to injection of a PVE product. This previously unknown complication of PVE can be managed percutaneously in order to avoid open heart cardiac surgery.