Hepatocellular adenoma (HCA) is a benign liver tumor that most frequently occurs in young women using oral contraceptives. We report a rare case of HCA in a 29 years old female with familial adenomatous polyposis (FAP). The first proband was her sister, who underwent a total colectomy and was genetically diagnosed as FAP. A tumor, 3.0 cm in diameter, was detected in the right lobe of the liver during a screening study for FAP. A colonoscopy and gastroendoscopy revealed numerous adenomatous polyps without carcinoma. The patient underwent a total colectomy and ileo-anal anastomosis and hepatic posterior sectoriectomy. The pathological findings of the liver tumor were compatible with HCA. The resected specimen of the colon revealed multiple colonic adenomatous polyps. Examination of genetic alteration revealed a germ-line mutation of the adenomatous polyposis coli (APC) gene. Inactivation of the second APC allele was not found. Other genetic alterations in the hepatocyte nuclear factor 1 alpha and β-catenin gene, which are reported to be associated with HCA, were not detected. Although FAP is reported to be complicated with various neoplasias in extracolic organs, only six cases of HCA associated with FAP, including the present case, have been reported. Additional reports will establish the precise mechanisms of HCA development in FAP patients.

Hepatocellular adenoma (HCA) is a benign liver tumor that usually arises in women who are over 30 years old and have used oral contraceptives for over 5 years[1]. Other risk factors associated with HCA have been described, including glycogen-storage diseases, androgens, anabolic steroids, diabetes mellitus, some drugs and pregnancy[2-5].

Familial adenomatous polyposis (FAP) is an autosomal dominant inherited disease caused by a mutation in the adenomatous polyposis coli (APC) gene. FAP is characterized by the early onset of multiple colorectal adenomatous polyps, with an inevitable progression to carcinoma if left untreated. Additionally, FAP is known to be associated with extracolic neoplasms in various other organs; adenomas and carcinomas of the upper gastrointestinal tract, desmoid tumors and thyroid carcinomas[6]. Due to familial screening and prophylactic colectomies, the prognosis of FAP patients has improved[6-8]. Thus, extracolic tumors have become more important causes of mortality[7]. Duodenal or periampullary cancer and desmoids are the two main causes of mortality after a total colectomy[9]. Other rare extracolic manifestations include cancers of the thyroid, liver, bile ducts and central nervous system[6,7,9]. HCA is rare for FAP-associated extracolic neoplasms[10].

Herein, we report a rare case of HCA concomitant with FAP. She had no history of oral contraceptive use or other risk factors for HCA. We summarize previous case reports[5,10-14] and consider HCA arising in FAP patients.

A 29 years old Japanese woman was called for familial surveillance of FAP because her 27 years old sister had undergone a total colectomy due to the diagnosis of ascending colon cancer arising from FAP, already confirmed by gene analysis. Her 46 years old father died of gastric cancer but FAP was uncertain. Her son had suffered from hepatoblastoma which had been resected when he was 18 mo old. Her preoperative clinical laboratory tests, including liver function, were normal. Serologically, serum hepatitis B and hepatitis C virus markers were negative. Serum levels of alpha-fetoprotein and des-γ-carboxy prothrombin were also within normal ranges. Preoperative computed tomography (CT) showed a tumor in the posterior sector of the right lobe, measuring 28 mm in diameter. The tumor showed a slight inhomogeneous low density area on the unenhanced scan when compared with the surrounding liver parenchyma (Figure 1). The tumor was well enhanced in the early phase after the contrast medium injection. The tumor became indistinguishable in the late phase. Although the tumor was not detectable on T1-weighted magnetic resonance imaging (MRI), it was detected as a mild hyper-intense tumor in the posterior sector on T2-weighted MRI (Figure 1). The tumor was indiscernible in the arterial phase, but became a hypo-intense area in the hepato-biliary phase after gadolinium ethoxybenzyl diethylenetriaminepentaacetic acid enhancement on T1-weighted MRI. No obvious capsular formation or visible central scars were observed (Figure 2). Hepatic arteriography showed a tumor stain without any abnormalities in vascular structure or angioplany. A total colonoscopy revealed numerous polyps of various sizes throughout the colon and rectum but no obvious colorectal carcinoma was found. Gastroendoscopy also found thick polyps without carcinoma. 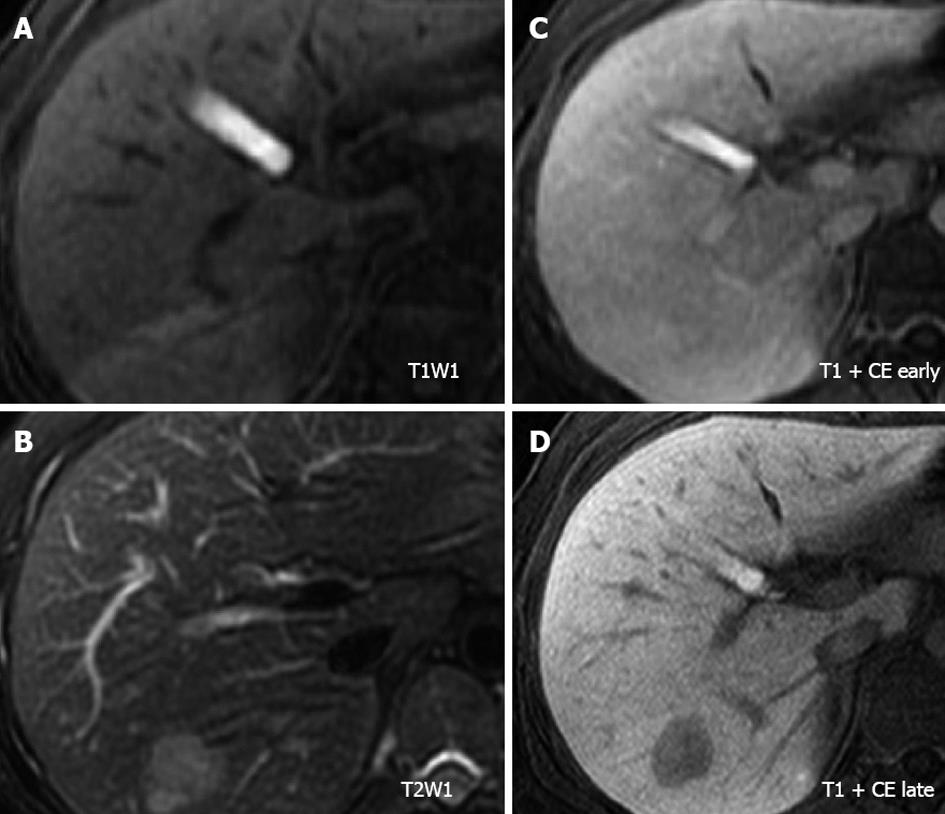 On the basis of clinical features[15] and previous literature[10-13], we performed a total colectomy and ileo-anal anastomosis and hepatic posterior sectoriectomy on December 2008. Macroscopically, numerous polyps of various sizes, including one lateral spreading tumor in the ascending colon, were found in the mucosal surface of the resected colon specimen. In the cut surface of the resected liver specimen, the tumor grossly showed a faint yellow tumor without hemorrhage or necrosis. The tumor showed an ill-defined border and was unencapsulated (Figure 3A). The surrounding liver tissue seemed to be normal parenchyma.

Figure 3 Pathological findings of the liver tumor. A: Cut surface of formalin-fixed liver specimen. The tumor was unencapsulated and its border was ill-defined (arrow); B, C: Microscopically, the tumor consisted of low-grade atypical hepatocytes, without cellular mitosis or changes in cellular density and structures. Fatty deposition in the tumor cells was ubiquitously remarkable. Neither biliary structures nor portal triads were present within the tumor (hematoxylin-eosin stain, original magnification ×40 in B and ×200 in C); D: β-catenin was immunohistochemically detected on the cytomembrane. Neither aberrant nuclear nor cytoplasmic accumulations were found (original magnification ×100).

Histologically, multiple colorectal polyps were adenomas with mild to moderate cellular atypia. A lateral spreading tumor was a tubular adenoma with severe atypia. The liver tumor consisted of low-grade atypical hepatocytes, without cellular mitosis or changes in cellular density and structures. Fatty deposition in the tumor cells was remarkable in some parts. No biliary structures or portal triads were present within the tumor (Figure 3B and C). There was no underlying hepatitis, fibrosis or cirrhosis in the adjacent liver parenchyma. These pathological findings were compatible for hepatic adenoma. To clarify the pathogenesis of this patient, genetic alterations of the germ-line and somatic genes were examined[16]. Sequencing of the germ-line APC gene revealed a transition from ACG to ATG at codon 499 in exon 11. No loss of the APC gene in HCA cells was demonstrated by fluorescence in situ hybridization (data not shown). No additional somatic mutation of the APC gene was found in the HCA. Moreover, a mutation of the hepatocyte nuclear factor 1 alpha (HNF1 gene, which is reported to be related to HCA[12]) was not detected.

The postoperative course was uneventful without any complications, and the patient was discharged twenty days after the operation. Follow-up CT scans revealed no signs of recurrence and other abdominal extracolic lesions 3 years after surgery.

HCA is usually found in healthy young women, especially those who use oral contraceptives for a long time. More than 750 HCA cases have been reported since the first report, showing a possible etiological association between HCA and contraceptives[17]. Glycogen-storage diseases, androgens, anabolic steroids, diabetes mellitus, some drugs and pregnancy have been reported as other causal factors for HCA[2-5]. However, the present patient did not have any known exogenous or endogenous pathogenic factors, except for FAP.

Patients with FAP can develop extracolonic lesions such as desmoid tumors, adenomas and carcinomas of the upper gastrointestinal tract[6]. An increased risk of hepatic tumors, mainly hepatoblastoma and hepatocellular carcinoma[18-20], has also been shown in FAP patients. Hepatoblastomas develop in young patients with FAP at least 100 times more frequently than in the general population[18]. Kurahashi et al[19] reported a biallelic mutation in the APC gene in hepatoblastoma developed in a FAP patient showing a germline mutation in APC. In fact, this patient’s son had hepatoblastoma at the age of 18 mo but the precise genetic information of hepatoblastoma has not been obtained.

Reported cases of HCAs arising in FAP patients are extremely rare. According to our literature review, only seven cases, including our case, have been reported (Table 1)[5,10-14]. Five of these patients were female and two were male. Among them, one patient used oral contraceptives[12] and another had a medical history of androgenic steroid use for the treatment of anaplastic anemia[13]. HCA containing HCC in a male FAP patient was recently presented[14].

The germ-line mutation of the APC gene was examined in four cases, including our patient[10-12]. Bala et al[11] suggested that inherited mutations in the APC gene between codon 1444 and 1578 significantly increase the risk of developing extraintestinal tumors, including liver tumors. However, the other APC gene mutation occurred at different codons in 3 cases[10,12], including the present case (Table 1). Biallelic inactivation of the APC gene was described in two cases[10,11] (Table 1). In the first case, loss of the wild-type APC allele, which caused hemizygosity of the inherited mutation, was demonstrated[11]. A somatic 4-bp insertion was detected at codon 1516 in another case[10]. These findings suggest that the relationship between the APC gene anomaly and HCA is more complicated than initially expected.

Recently, genotype/phenotype classifications of HCA have drawn attention as a noticeable phenomenon from the aspects of pathogenesis and pathological tumorigenesis[21-23]. In their reports, HCAs are classified into four categories: (1) HCAs with mutations of the HNF1 gene (H-HCA, 35%-40%); (2) HCAs with mutations of the β-catenin gene (β-HCA, 10%-15%); (3) inflammatory HCAs with mutation of the IL6ST gene (I-HCA, 40%-50%); and (4) HCAs without markers (unclassified HCA, less than 5%-10%). Our patient showed no symptoms or signs of an inflammatory syndrome. Additionally, the HCA in the present case morphologically lacked the typical characteristics of I-HCA, such as inflammatory infiltrates, sinusoidal dilatation and numerous thick arteries[21-23]. The β-catenin gene was supposed to be normal[24,25] because β-catenin was immunohistochemically detected only around the cytomembrane, without aberrant nuclear and cytoplasmic staining distributed in random and heterogeneous patterns (Figure 3D). Thus, the tumor is not β-HCA. In our case, histopathological characteristics of the liver tumor were closely compatible for H-HCA (Figure 3B and C) since H-HCAs are pathologically characterized by marked lipid deposition in tumor cells without cytological abnormalities or inflammatory infiltrates[21-23]. However, no HNF1 gene mutation was identified (data not shown). Although this tumor may be categorized as an unclassified HCA, further investigation of tumorigenesis is necessary[26].

In conclusion, we reported here a rare case of HCA arising in a female FAP patient. Because of its rarity, the pathogenesis of HCAs in patients with FAP remains undefined. More cases should be examined to establish the genetic alterations associated with benign hepatic tumorigenesis in FAP patients. Results may shed light on a breakthrough for hepatocellular carcinogenesis[25].

The authors would like to thank Shinji Kageyama (present address Genetic Lab. Co., Ltd., Sapporo) for genetic sequencing and Kiyoko Nagura for technical assistance on fluorescence in situ hybridization.