Pyogenic liver abscesses are rare but a life-threatening important condition. Dental procedures constitute only rare cases of pyogenic liver abscesses, with only a few cases in the literature. We report a patient with liver abscess following a dental procedure. A 74 years old diabetic male patient was admitted to our hospital with complaints of fatigue, 40 °C fever, rigors and right upper quadrant pain, 3-4 d after a dental procedure. Physical examination revealed fever and tenderness in the right upper quadrant. Laboratory examination revealed leucocytosis, elevated erythrocyte sedimentation rate and C-reactive protein and moderately elevated transaminases. An abscess was detected in radiological examination in the medial part of the left lobe of liver, neighboring the gall bladder. He was successfully treated with percutaneous abscess drainage and antibiotherapy.

We report a patient with liver abscess following a dental procedure (implantation).

A 74 years old man underwent a dental prosthesis implantation approximately ten days ago. Three to four days after the dental prosthesis implantation, he suffered from malaise, abdominal pain in right upper quadrant and chills. He recoursed to the first medical center with 40 °C fever and increasing complaints. In the first hospital, liver abscess was suspected on ultrasonographic (USG) evaluation of the abdomen and with USG-guided drainage, this abscess material was sent for cultural analysis simultaneously with the blood culture. Intravenous empirical antibiotherapy with Ceftriaxone 1 gr bid + Metronidazole 500 mg bid was given in the first medical center. The patient recoursed to our center for treatment by his own desire.

He had a 3 years history of diabetes mellitus and used metformin irregularly. Physical examination revealed weakness, a blood pressure of 120/80 mmHg, a heart rate of 84 beats/min and a body temperature of 38.7 °C. His conjunctiva were pale. Tenderness was found in the right upper quadrant and other physical findings were unremarkable.

Ultrasonography of the abdomen revealed that the liver was steatotic and there was a single hypoechoic-heterogenous lesion 75 mm × 60 mm in diameter within the medial part of the left lobe, neighboring the gall bladder. Abdominal computed tomography (CT) scan showed no contrast involvement in the lesion after the contrast injection but showed involvement just around this lesion (Figure 1). Separately, the cortical cyst 10 mm in diameter was detected on the left kidney. Calibration of small and large intestinal segments and wall thickness were normal. Gall bladder and biliary tract were normal. No intraabdominal fluid collection was detected. 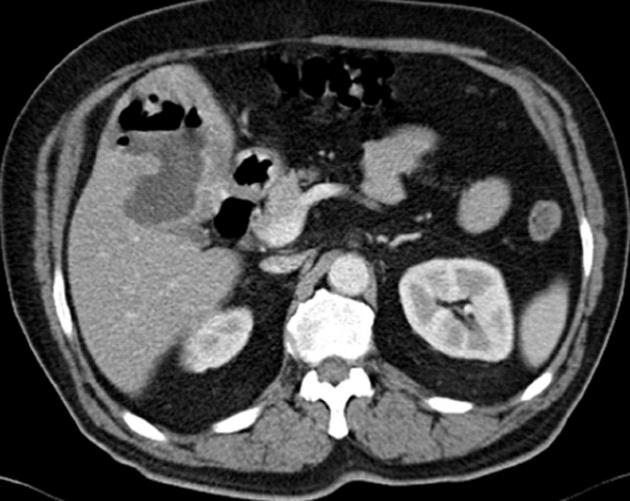 Figure 1 An intraparenchymal abscess approximately 82 mm × 73 mm in diameter including air-fluid level viewed within the medial of the left lobe in liver in abdominal computed tomography.

After diagnosis of liver abscess, the patient was treated with intravenous Imipenem 4 mg × 500 mg + Metronidazol 3 mg × 500 mg empirically. Hydration and subcutaneus insulin injections were applied. We learned that streptococcus subspecies was isolated from the abscess material culture and from the blood sample taken before empirical antibiotherapy. Urine culture was negative.

After that, USG-guided percutaneous drainage of the liver abscess was performed. A total of 400 mL foul-smelling purulent material was drained; 300 mL on the first day and 100 mL on the following day. His complaints improved after the drainage of the abscess and 14 d of antibiotherapy. The fever decreased, he was clinically well and the white blood cell count, CRP and sedimentation rate values returned to normal.

In our case we demonstrated a liver abscess development with hematogenous route due to the dental procedure. Isolating the same microorganisms from both the blood sample and abscess material, the onset of his symptoms 3-4 d after the dental prosthesis implantation and no detection of another infection origin supported our opinion. This procedure might have caused bacteremia spreading to the liver via the hepatic artery.

Patients with increased risk of infection, such as immunosuppression, diabetes and malignancy, should be treated with prophylactic antibiotherapy during and after dental procedures. Appropriate oral care is clearly important, not only for dental, but also for systemic diseases.