Over 200 000 weight loss procedures are performed annually in the United States. Physicians must therefore be cognizant of the unique array of complications associated with these procedures. We describe a case of jejunojejunal intussusception in a gastric bypass patient who presented with acute liver failure (ALF) due to acetaminophen (APAP) toxicity. Our patient is a 29 year-old female who had undergone Roux-en-Y gastric bypass surgery seven years prior. She was evaluated in the emergency department for confusion. Her family reported a 3-wk history of progressive abdominal pain and vomiting, for which she had ingested 40 acetaminophen/oxycodone tablets over the past 2 d. Physical examination showed icteric sclerae, a distended abdomen, and grade I encephalopathy. She fulfilled the criteria for ALF and was listed for liver transplantation. Abdominal computed tomography scan revealed a jejunojejunal intussusception. She underwent emergent exploratory laparotomy and resection of the infarcted intussusceptum and the previous jejunojejunostomy. She had rapid clinical improvement, with decreasing liver enzymes and improved hepatic synthetic function. She had complete resolution of coagulopathy and encephalopathy, and was removed from the liver transplant list. She was discharged home 20 d after hospitalization with normal liver tests. This case demonstrates that acute abdominal catastrophes can potentiate liver injury in the setting of acetaminophen toxicity. Encephalopathy may obscure history and physical exam findings. This case also exemplifies the pitfalls in the management of the bariatric surgery patient and the importance of multispecialty collaboration in patients presenting with organ failure.

Acute liver failure (ALF) is an uncommon but catastrophic illness, with an estimated annual incidence of 2000 cases in the United States[1]. It is defined as coagulopathy (international normalized ratio ≥ 1.5) and encephalopathy without pre-existing liver disease, of less than 26 wk duration[1]. Drugs and toxins account for the majority of cases of ALF, followed by acute viral hepatitis A and B. Of ALF cases, 15%-20% have no identifiable cause despite extensive clinical investigation[1].

The mortality rate of acute liver failure approaches 85%. However, approximately 15%-20% of patients with fulminant or subfulminant hepatic failure will improve spontaneously[2]. Of the treatments available for the management of ALF, emergency orthotopic liver transplantation is one of the best interventions with 3-year survival rates of 50%-75%[2,3].

A 29-year-old female with altered mental status was brought to the Emergency Department by her family. She had undergone a Roux-en-Y gastric bypass procedure seven years prior. According to her family, she had progressive abdominal pain and vomiting for three weeks. She had ingested 40 tablets of acetaminophen/oxycodone (acetaminophen total dose 13 000 mg) to control her abdominal pain over the previous two days, prescribed by her family physician while awaiting further outpatient evaluation. Her physical examination showed icteric sclerae, a distended abdomen, and grade I encephalopathy. Her laboratory values are summarized in Table 1. Her model for end Stage liver disease score was 41. She fulfilled the criteria for ALF and was promptly listed for liver transplantation. Her creatinine at admission was elevated to 4.7 and she was oliguric. She was started on N-acetylcysteine and was admitted to the intensive care unit.

Hepatic ultrasound revealed a mildly enlarged liver measuring 21.4 cm that was otherwise normal in echotexture and contour. Due to her history of abdominal pain, a computed tomography scan of her abdomen was also obtained, which revealed a jejunojejunal intussusception (Figure 1). 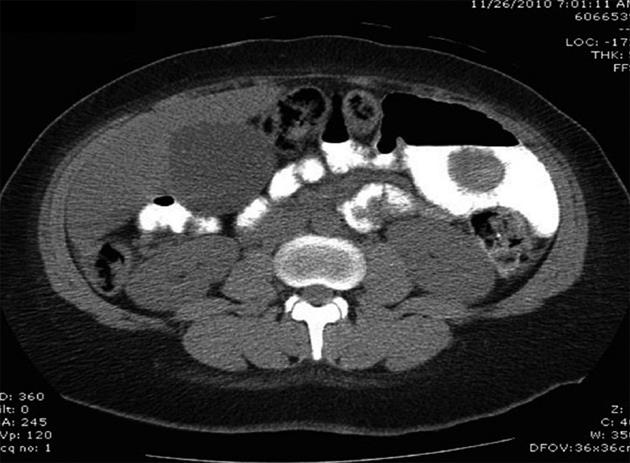 Based on these findings, the patient underwent an emergent exploratory laparotomy and resection of the intussuscepted bowel and the entire jejunojejunostomy. The jejunojejunostomy was patulous, with 45 cm portion of her common channel intussuscepted in an antiperistaltic fashion into her jejunojejunostomy (Figure 2). The intussusception was unable to be reduced and succus was found leaking from this site, which suggested bowel necrosis. The jejunojejunostomy was opened and the intussusceptum was found to be infarcted (Figure 3). The necrotic bowel was resected en bloc, and the patient was left in gastrointestinal discontinuity. A planned second look operation was conducted to assess the viability of the Roux limb, which was at risk for ischemia as its vascular pedicle was violated on resection of the jejunojejunostomy. Two days after her first surgery, her gastrointestinal continuity was restored. At the same procedure, a liver biopsy was performed which showed extensive pericentral hepatocyte dropout and central-central bridging necrosis, consistent with drug-induced liver injury secondary to acetaminophen (Figure 4). After the second operation, her clinical condition improved. She had complete resolution of coagulopathy and encephalopathy, and was removed from the liver transplant list. Her renal function improved without hemodialysis, and her oliguria resolved. She was able to tolerate a full diet and was discharged home 20 d after hospitalization. At follow-up three months later, she remains well with normal liver function tests. 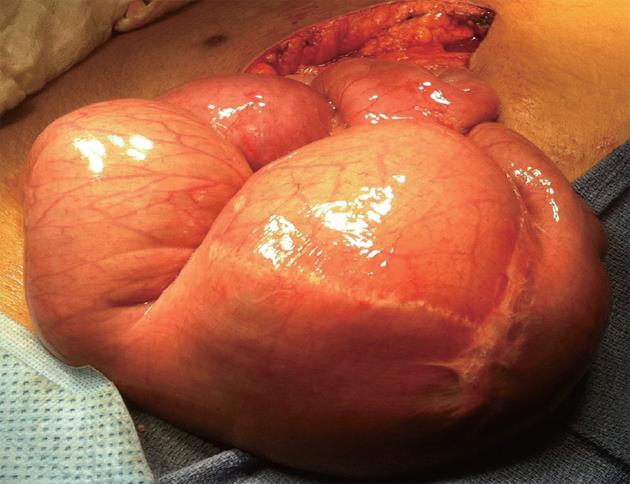 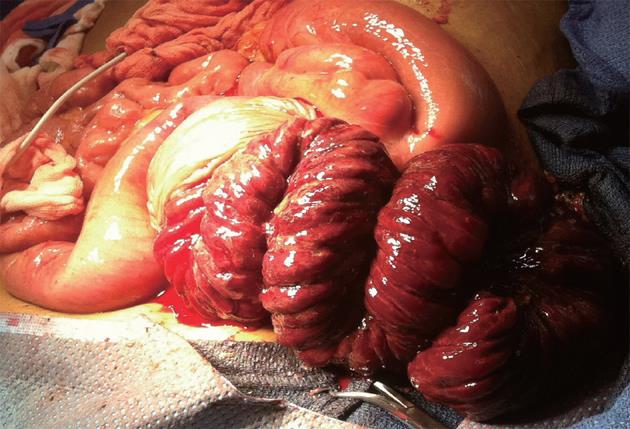 Figure 3 Opened jejunojejunostomy revealed a substantial portion of dead bowel inside it. 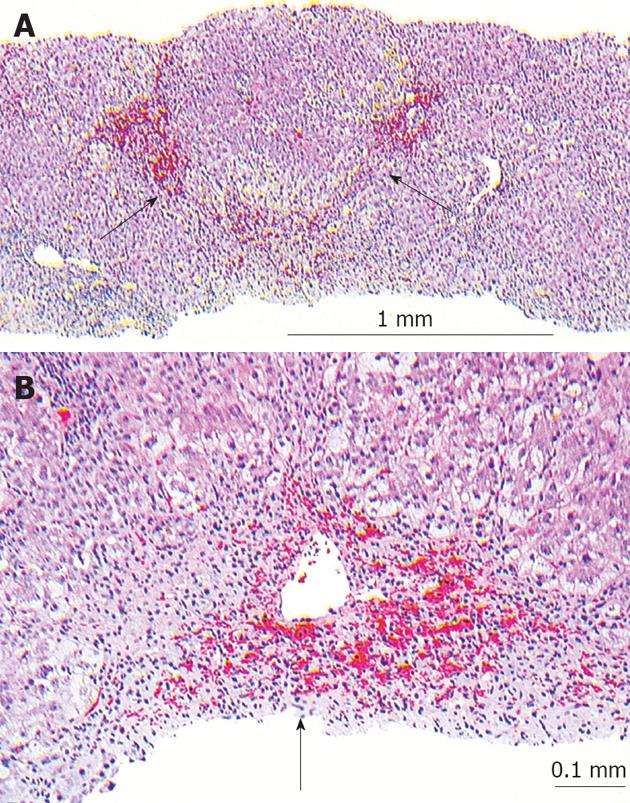 Small bowel intussusception is a rare cause of bowel obstruction, the etiology of which remains unclear. The incidence of intussusception is approximately 0.1%[6]. The orientation of the intussusceptions is unique in that the distal small bowel, in an anti-peristaltic fashion, is pulled into the jejunojejunostomy. Symptoms may be acute, mimicking a small bowel obstruction, or chronic, with intermittent abdominal pain and nausea. If not recognized and treated promptly, this rare complication may cause obstruction and lead to bowel necrosis. Computerized tomography scan is the diagnostic test of choice, but surgery is sometimes the only way to establish the diagnosis when symptoms are intermittent[7].

This patient’s presentation of intussusception was masked by the acute liver failure. A high index of suspicion led to an imaging study that identified her bowel obstruction. Treatment of this condition can range from just the reduction of the small bowel, if the components are viable, with plication of the bowel to prevent recurrence, to a high-risk procedure involving bowel resection and intestinal reconstruction[8].

In conclusion, due to the increasing number of patients who have undergone bariatric surgery, emergency physicians, primary care physicians, general surgeons and gastroenterologists should all be well versed in the varied procedures offered to treat obesity and the potential complications. Surgeons experienced in bariatric surgery should be quickly involved in the management of abdominal complaints in patients with a history of weight loss surgery. This case also highlights the importance of multispecialty collaboration in patients presenting with organ failure in the emergency department. The involvement of the transplant team from the time of admission permitted her to be added to the liver transplant list without delay. Furthermore, the collaboration with the gastroenterologists made it possible to care for this patient optimally, which requires a highly specialized supportive care.