There are cases of hepatitis involving occult hepatitis B virus (HBV) infection in which, even though the HB surface antigen (HBsAg) is negative, HBV-DNA is detected by a polymerase chain reaction (PCR). We conducted a sequence analysis of the entire HBV region in a case of non-B non-C chronic hepatitis in a 46-year-old female. A diagnosis of non-B non-C chronic hepatitis was made. Although HBV markers, such as HBs antibody (anti-HBs), anti-HBc, HBeAg and anti-HBe, were negative, HBV-DNA was positive. Nested PCR was performed to amplify the precore region of HBV-DNA and all remaining regions by long nested PCR. Sequence analysis of the two obtained bands was conducted by direct sequencing. Compared with the control strains, the ATG (Methionine) start codon in the X region had mutated to GTG (Valine). It is assumed that a mutation at the start codon in the X region may be the reason why HBV markers are negative in some cases of hepatitis that involve occult HBV infection.

The existence of hepatitis involving occult hepatitis B virus (HBV) infection in which, even though the HB surface antigen (HBsAg) is negative, HBV-DNA is detected by a polymerase chain reaction (PCR), has been proposed as one type of non A-E type hepatitis of unknown origin[1,2]. Among the cases of non-B non-C chronic hepatitis treated in our hospital, one case of occult HBV infection was detected as positive by supersensitive assay for HBV-DNA, the Direct Method[3]. Amplification products in the HBV-DNA precore (preC) region as well as in all remaining HBV-DNA regions were obtained by PCR and long PCR, respectively. Direct sequencing of these products was carried out, in order to compare them with the reported sequences of already registered genomes of HBV, as well as to consider the cause of HBV markers becoming negative. As a result, a mutation at the start codon in the X region was observed, which may be one cause of occult HBV infection, as reported below.

A 46-year-old female visited our hospital in April 1995, wishing to undergo a thorough examination for liver damage. Her biochemical values were high: aspartate transaminase (AST) 41 IU/L, alanine transaminase (ALT) 62 IU/L, gamma-glutamyl transferase (γGT) 39 IU/L, and zinc sulfate turbidity test 17.7 U. Platelet counts were low, at 12.8 × 104/μL and indocyanine green retention rate at 15 min was high at 12%. These findings which seemed to confirm chronic hepatitis. However, HBsAg, HBs antibody (anti-HBs), anti-HBc, HBeAg and anti-HBe were all negative, and so was hepatitis C virus antibody. The patient did not have a history of alcohol use and anti-nuclear antibody and anti-mitochondrial antibody tests were also negative (Table 1). The abdominal ultrasonographic findings also suggested chronic hepatitis. A diagnosis of non-B non-C chronic hepatitis was made and administration of ursodeoxycholic tacid (UDCA) was commenced in January 1996. As a result of the continuous administration of UDCA (600 mg/d), although ALT once rose to 80 IU/L, it remained less than 40 IU/L from September 1999 onwards throughout the course of treatment. Occult HBV infection was suspected and, during the course of treatment, HBsAg was reexamined, HB core related antigen was examined, and HBV-DNA was measured by AMPLICOR HBV MONITOR Assay[4]. The results of all these procedures were negative. However, a newly developed, supersensitive assay for HBV-DNA, the Direct Method[3], showed a positive result at 45 IU/mL (equivalent to 1.7 log copies/mL).

Using stored serum from the patient, and based on a report by Omata et al[5], a primer set that may amplify the HBV preC region was developed and nested PCR was performed to amplify the HBV-DNA segment[6]. Also, in order to amplify all remaining HBV-DNA regions other than the preC region, reverse primer sets were developed in the preC region and in its vicinity, and by altering the methods applied by Tellier et al[7] as well as by Günter et al[8],

amplication of HBV-DNA was attempted by long nested PCR (Table 2). In the amplification of the preC region by PCR, a band of 0.2 kb was obtained. Also, in the amplification of all remaining regions by long PCR, a band of 3.0 kb was obtained. Sequence analysis of PCR amplification products was conducted by direct sequencing. The results of the sequences analysis of these two products were combined and, as a result, the base sequence of all HBV-DNA regions was identified (Figure 1). DNASISR gene analysis software (Hitachi Electronics Engineering Co., Ltd.) was applied to compare the base sequence obtained by us with the sequences of already registered genomes of four HBV strains, DQ478885, AP011098, AB367417 and AB246344[9-13], using National Center for Biotechnology Information Basic Local Alignment Search Tool. As a result, the sequence for the genotype was 2C and matched 98% of the sequences of each of these 4 control strains. The results from comparing the 4 control strains revealed mutation of the ATG (Methionine) start codon in the X region to GTG (Valine) in this case. However, the start codon in the S, P, C regions was intact, as with the other 4 strains. Further, the start codon in the preX region was also intact, as with the other 4 strains, although a mutation of TGA (stop codon) to CGA (Arginine) was identified. Of these 4 control strains, only the AP011098 strain was TGA and all the other 3 stains were CGAs. 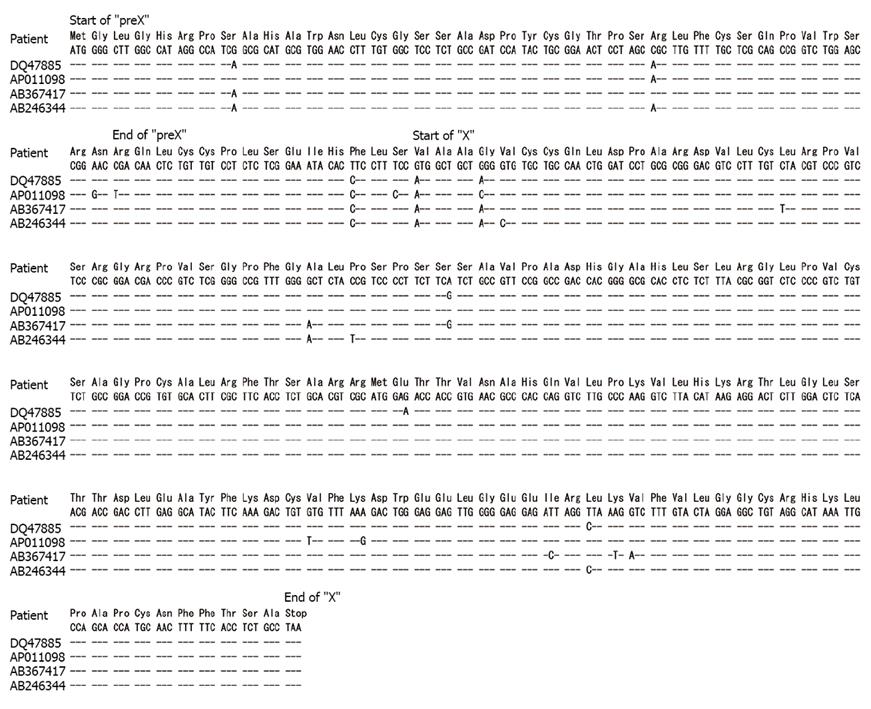 reverse primer sets were developed in the preC region and in its vicinity, with which the amplification of genes by long nested PCR was attempted. As a result, a 3.0 kb amplification product was obtained by long PCR.

In this case, the result of analysis of the base sequence of all HBV-DNA regions demonstrated that the ATG (Methionine) start codon in the X region had been mutated to GTG (Valine). X protein (HBx) produced by X-open reading frame (ORF) is known as a multifunctional regulator that interacts with host factors and, as a result thereof, modulates transcription, signal transduction, protein degradation pathways, apoptosis and genetic stability[14]. Evaluating the role of HBx in the viral life cycle of HBV, Xu et al[15] utilized HBV transgenic mice that could not produce HBx and reported that HBx activates the viral genome expression, thereby enhancing viral replication. In addition, Bouchard et al[16] transfected an HBV genome that could not express HBx into HepG2 cells and observed that HBV replication decreased 5 to 10 fold. Furthermore, Tang et al[17] demonstrated that ectopically expressed HBx could stimulate HBV transcription and replication with the X-defective replicon to the same level as with the wild-type. On the other hand, Reifenberg et al[18] reported that in X-deficient HBV transgenic mice, HBx was not required for HBV replication or for virion secretion. In addition, Meier et al[19] reported that the DHBV strain with a knockout mutation in the X-ORF was not different from the wild-type strain in terms of infectivity and in vivo growth. From these reports, it is concluded that, although HBx may not be essential for HBV replication and for the synthesis of virus particles, it may play an important role in stimulating HBV replication. Since no significant mutation was observed in other regions in this case, it is assumed that, although HBV particles are produced, the detection of each HBV marker becomes difficult due to the X region not being translated along with HBx not being synthesized and HBV proliferation decreasing.

ATG (start codon) in the preX region proposed by Takahashi et al[20] was intact in our case, as it was in 4 control strains. On the other hand, in our case TGA (stop codon) was mutated to CGA (Arginine) in the preX region. In the 4 control strains from patients, only the AP011098 strain was TGA and the other 3 stains were all CGAs. In the same report, it was noted that a mutation [TGA to CGA or TGA to AGA (Arginine)] had been observed in 21% of the asymptomatic HBV carriers and in 64% of the patients with chronic hepatitis B[20]. It is suggested that a variant without a stop codon in the preX region may be translated linearly from the preX through the X regions, like the translation within the preC and core regions. In this case, it is possible that the lack of a stop codon in the preX region may supplement the fact that there was no start codon in the X region and HBx was not produced.

Occult HBV infection infers an infected state of HBV in which, even though HBsAg is negative, HBV-DNA is detected by PCR[1,2]. It was reported that, after recovery from acute hepatitis B, HBV virions form an immune complex with the anti-HBs in blood and, as a result, the state of HBsAg negative occult HBV infection persists for a long period of time[21,22]. On the other hand, it was reported that, in patients with chronic liver diseases of unknown origin, HBV-DNA is detected by PCR at a rate of 10%~30%[23-25]. In the majority of these cases of occult HBV infection, the amount of virus is small and a supersensitive assay is required to detect HBV-DNA[24,25]. It is said that, in cases of chronic hepatitis B, when the amount of virus becomes smaller, hepatitis is usually mitigated. However, in some of these cases of occult HBV infection, chronic inflammation continued and cirrhosis subsequently developed[23,24]. In the featured case, although the amount of HBV-DNA was small, persistent hepatitis, which requires medication, was observed. The mutation of HBV-DNA in such cases of occult HBV infection has been reported. Preisler-Adams et al[26] reported that, for cases in which HBV markers had not been detected, single base variation in the enhancer I, substitution of 9 amino acids in the P region, and substitution of 3 amino acids in the X region had been observed. Also, Fukuda et al[27] reported that, in cases of non-B, non-C hepatitis, deletion mutation of 8 nucleotides was observed at high rates in the distal part within the X region. In our case, a mutation at the start codon in the X region was observed. These results suggest that, although the mechanism by which HBsAg becoming negative in patients that involves occult HBV infection is not uniform, it is likely that a mutation of HBV-DNA may negatively affect replication and expression of the virus. We would suggest that, as was seen in this case, prohibition of HBx production due to a mutation at the start codon in the X region is one possible cause of occult HBV infection. In the future, we would like to conduct further research to examine whether similar mutations can be seen in cases in which occult HBV infection is involved. In conclusion, in a case of non-B non-C chronic hepatitis, following identification of the base sequence in all HBV-DNA regions, a mutation at the start codon in the X region was observed. It is concluded that this may be the cause of HBV markers being negative, as seen in some cases of hepatitis that involve occult HBV infection.