The use of bee venom as a therapeutic agent for the relief of joint pains dates back to Hippocrates, and references to the treatment can be found in ancient Egyptian and Greek medical writings as well. Also known as apitherapy, the technique is widely used in Eastern Europe, Asia, and South America. The beneficial effects of bee stings can be attributed to mellitinin, an anti-inflammatory agent, known to be hundred times stronger than cortisone. Unfortunately, certain substances in the bee venom trigger allergic reactions which can be life threatening in a sensitized individual. Multiple stings are known to cause hemolysis, kidney injury, hepatotoxicity and myocardial infarction. The toxicity can be immediate or can manifest itself only weeks after the exposure. We describe hepatotoxicity in a 35-year-old female, following bee sting therapy for multiple sclerosis. She presented to our clinic 3 wk after therapy with a history of progressive jaundice. The patient subsequently improved, and has been attending our clinic now for the last 9 mo.

Bee venom therapy is the specialized form of apitherapy, and requires the expertise of a trained practitioner. Usually, a course of treatment starts with testing the patient for allergy, which is known to occur in 1% of the general population. Bee venom is administered in the form of a direct bee sting or else by injection of a venom extract. The treatment is usually given twice a week. Some reports have shown beneficial effects of bee venom in postherpetic neuralgia[1], swine flu[2], fibromyalgia and multiple sclerosis, etc., while other reports have described severe toxicities developing in response to bee venom therapy[3,4]. Animal models have been used to study the toxicity caused by bee stings. Bee stings cause hemoconcentration which might be related to the marked edema induced by the venom. Following bee stings there is an increase in various cytokines like interleukin (IL)-1β, IL-6, tumor necrosis factor-α, etc. In a mouse model using the subcutaneous route, rapid increases in serum alanine aminotransferase and aspartate aminotransferase transaminases, creatinine, urea nitrogen, uric acid, sodium and chloride electrolytes, and creatine kinase were recorded, indicating damage to liver, kidneys, and skeletal muscle[5]. We describe hepatotoxicity following apitherapy in a young female in this brief report.

A 35-year-old female presented to our clinic with a history of progressive jaundice of 3 wk duration. She denied history of abdominal pain, fever, viral prodrome or offending drug intake. She was an established case of multiple sclerosis of 10 years duration, in remission (fully ambulatory without any neuro-deficit) for the last 5 years. She had received apitherapy 5 years back and had developed a similar illness; however, she was not evaluated at that time. This year, 10 bees were put on her legs and arms by a local practioner. She described lot of fatigue soon after therapy but remained hemodynamically stable. Several days later she developed anorexia, and noticed that her urine was highly colored; attendants noticed yellowish discoloration of her sclera. She was brought to our clinic showing these symptoms. She denied any melena or bleeding or loss of consciousness. On examination she was conscious, oriented, deeply icteric, with no lymph adenopathy. She had no pedal edema and there were no petechial spots. Her systemic examination was unremarkable. She had normal liver span and there was no ascites. On evaluation she had hemoglobin of 130 g/L with a normal cell count and platelet count. Her liver function test results are shown in Figure 1. There was predominantly direct hyper bilirubinemia, serum Bilirubin was 637 μmol, serum glutamic-oxaloacetic trensaminase (SGPT) and serum alanine aminotransferase (AST) and alkaline phosphatase levels were also elevated (normal range < 39 IU/L) as shown in Figure 1. An ultrasound examination of her abdomen revealed a liver of normal size and echo texture with normal intra hepatic veins. She had a normal common bile duct diameter and no intra-hepatic bile duct dilatation. Her kidney function tests were normal. Her viral markers (HBsAg, IgM HEV, IgM HAV, and Anti HCV) were all negative. Her serum cerulo plasmin levels, iron profile and thyroid stimulating hormone levels were all within normal limits. She had no features of hemolysis and her celiac profile was negative. However, her antinuclear antibodies (ANA) levels were positive (1:640) with high IgG titers (IgG1 13.20 g/L) on the day of presentation. Anti mitochondrial antibody and anti smooth muscle antibody titers were also elevated. She was managed with capsule ursodeoxycholic acid 500 mg orally twice daily for a period of 8 wk, and her liver function tests were serially followed. She showed a progressive clinical improvement. Her liver function tests normalized over a period of 8 wk (Figure 1). She had no coagulopathy or altered sensorium during her whole illness. She is clinically fine and has been regularly attending our clinic for the last 9 mo. On follow-up, all her autoimmune markers became negative after 8 wk. 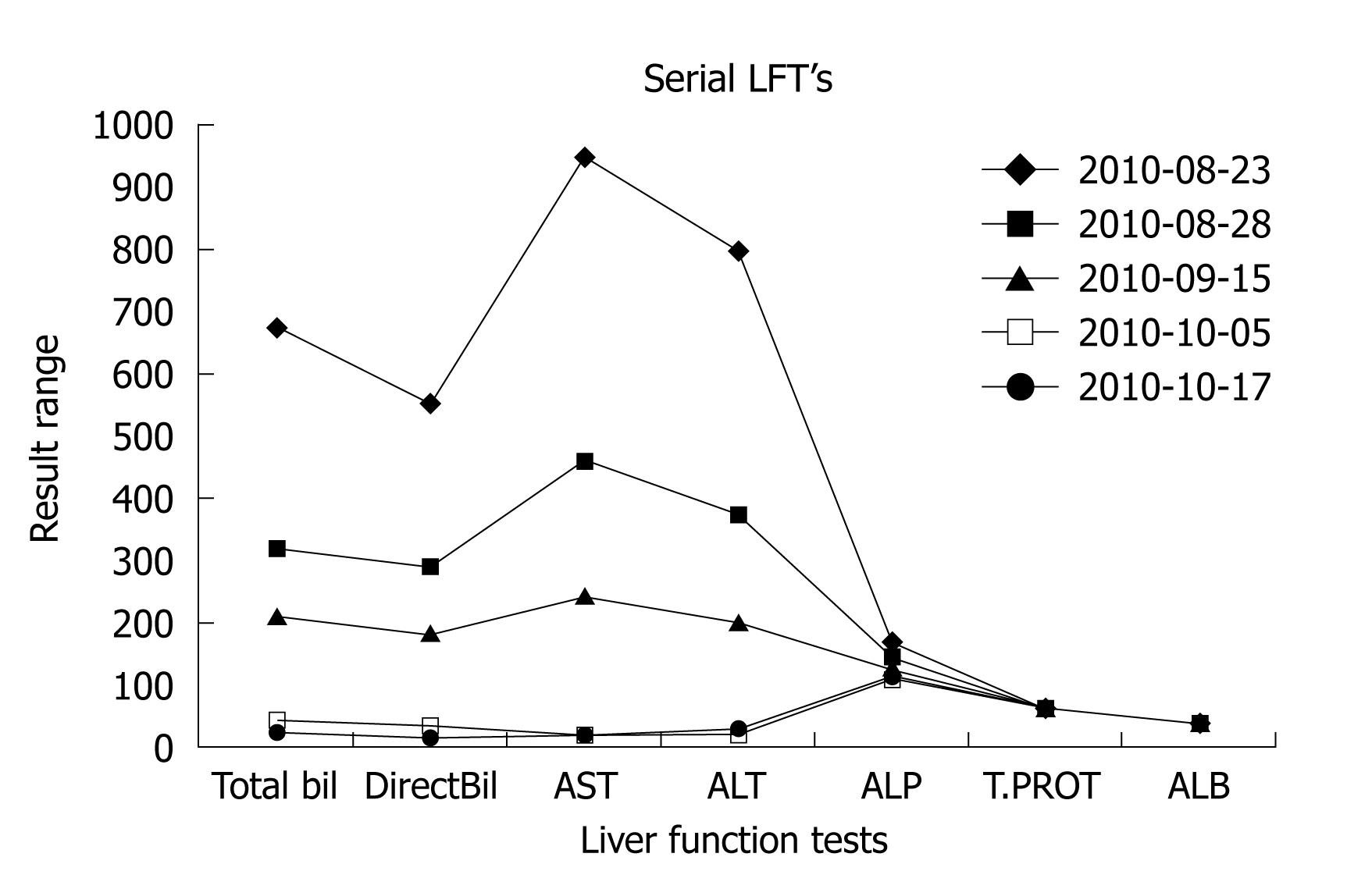 The index case had a temporal profile suggestive of liver cell damage following bee sting therapy. She was extremely tired after therapy; however, she had no anaphylaxis or renal failure. She started showing symptoms of clinical jaundice 3 wk after the therapy, but maintained her sensorium and the synthetic parameters of liver cell function. The liver cell injury was self-limiting, with a complete improvement in her biochemical profile over a period of 8 wk. The spectrum of bee sting toxicity is variable. Some patients can develop life-threatening anaphylaxis but most of the patients simply develop local pain and reaction. Reports of renal, cardiac and liver toxicities following multiple bee stings have been described in the literature. Lim et al[6] described the biochemical profiles in a series of 17 patients with bee stings. The authors observed that out of 17 patients, an elevation of liver enzymes was seen in 50% (9/17). Authors in the same study observed an elevation of serum creatine phosphokinase and serum lactate dehydrogenase levels, which correlated with muscle damage on histology. All patients in their series had transient elevations of liver enzymes and had no sequelae like that of the index case. In an animal model, Neuman et al[7] observed that the hepatotoxicity associated with venom sac extract was proportional to the dose of toxin used, and that liver cell damage due to venom was of the cholangiocellular type. The authors were of the opinion that no further biochemical proof is needed to establish the hepatotoxicity of venom sac extract. Bee stings activate mast cells and trigger a prothrombotic state. Mast cell activation followed by acute coronary syndrome was described by Mytas et al[4] in a 58-year-old man with no history of cardiac disease, who had been stung by bees. In their case, the patient’s coronary angiography showed left anterior descending artery thrombotic lesion. In a similar setting, a significant thrombotic lesion in the right coronary artery was demonstrated by Murat et al[8], reflecting prothrombotic phenomenon after a bee sting. The prothrombotic state is not restricted to coronaries only; Temizoz et al[9] reported focal neurological deficit 2 h after being stung by a bee in a 60-year-old male, and magnetic resonance imaging of his brain demonstrated cerebral infarction. It is quite possible that the bee sting- induced reversible prothrombotic state was the cause of liver cell injury in our case. However, it is difficult to prove, as Doppler ultrasound revealed normal hepatic veins and she had never had hypotension or anaphylaxis. Recently, bee sting-induced anaphylaxis, severe hypotension and subsequent sigmoid colon ischemia has been reported by Park et al[3]. Given the fact that our patient had never had hypotension during her illness, this mechanism does not seem to be operative in the causation of liver cell injury. Making the issues of bee sting still more complex, there is a report of thrombocytopenic purpura following bee stings, with the platelet count dropping to as low as 15 000 and the patient requiring hospitalization and platelet transfusion to stop bleeding[10]. Among the neurological toxicities there are reports of optic neuritis to pontine hemorrhage following the introduction of bee venom[11]. It shows clearly that there is a varied response to bee stings in humans. Bee stings can trigger a prothrombotic or hemorrhagic phenomenon, depending upon the type of species or hither to unknown host factors. There are reports of non traumatic rhabdomyolysis presenting as acute renal failure following bee sitting[12]. Kidney function tests on the index case gave normal results, and her platelet count was also normal. It is pertinent to mention that the patient gradually recovered and the toxicity was reversible. She had high anti nuclear antibody ANA titers on presentation, with a serial drop, and, finally, ANA and other immune marker levels became negative without any specific intervention. This causes us to speculate on the existence of a reversible, transient autoimmune phenomenon having been triggered by the bee sting, causing liver cell damage; however, this theory needs further proof. Whatever the mechanism, the index case experienced a severe liver cell toxicity following bee sting therapy, as her entire etiological profile was non-contributory. Advocates of apitherapy (bee venom as therapy) claim many beneficial effects of bee venom. In a Chinese study[13] of 100 patients with rheumatoid arthritis, where, in addition to the usual medication, bee sting therapy was used, it was found to be beneficial and was shown to reduce analgesic demand and morning stiffness when compared to the group where only medications were used. The authors in this study concluded that bee sting therapy is beneficial in rheumatoid arthritis. There are reports of relief in post- herpetic neuralgia following bee sting therapy. It has been shown that bee sting therapy has anti-nociceptive and anti-inflammatory properties; however, it needs further investigation before it can be used as a modality for postherpetic neuralgia[1].

Bee keepers can form an interesting cohort to study the toxicity of bee sting envenomation. It is felt that persons dealing with bees need to be sensitized so that they do not fall prey to the serious side effects of bee stings, especially anaphylaxis. Münstedt et al[14] conducted a study among 73 bee keepers and demonstrated that, after desensitization, there is a complete absence of symptoms following re-exposure to bee stings. Successful immunotherapy to prevent severe anaphylaxis after a bee sting, in combination with omalizumab, an anti-immunoglobulin E monoclonal antibody, has also been reported[15].

In conclusion, it may be said that the present case brings to the fore the various manifestations of bee sting envenomation as well as the need for systematic studies to examine its pathogenesis.