To analyze the significance of positive autoantibodies in donors on post-transplant outcomes in recipients.

We performed a retrospective review of living liver donors who had undergone liver transplantation between January 1, 2012 and August 31, 2021. Demographic characteristics and pre-transplant data including antinuclear antibodies (ANA) and anti-smooth muscle antibody titers were collected in donors. Outcomes of interest were post-transplantation complications including mortality, biliary strictures, biliary leaks, infection, and rejection. Pediatric recipients and donors without measured pre-transplant autoantibody serologies were excluded from this study.

Donors often undergo extensive screening prior to being approved. Transplant centers vary in their specific protocols for donor evaluation and selection, but general principles include ensuring that the donor has normal liver function and structure and is not a risk to the recipient with respect to disease transmission. It has been estimated that less than half of the candidates who complete transplant evaluation will be accepted for donation[1].

In the liver transplantation literature, few studies have evaluated the effect of pre-transplant positive autoantibodies on graft outcomes. While traditionally graft rejection has been associated with antibodies specific to organ donor HLA, there is mounting evidence supporting the association of non-HLA antibodies with rejection and decreased graft survival in kidney, heart, and lung transplantations[12,13]. It is hypothesized that tissue damage associated with ischemia-reperfusion, vascular injury, and rejection creates permissive conditions for autoantigens and allows for autoantibodies to bind to antigenic targets to further cause vascular inflammation and organ dysfunction[14].

This was a retrospective study designed to compare post-transplantation outcomes between recipients who received transplants from positive autoantibody donors to those who received transplants from negative autoantibody donors. Data was collected by chart review. The study population consisted of patients that underwent a living liver donor transplantation between January 1, 2012 and August 31, 2021. Transplantations in recipients less than 18 years old and in those who received a transplant from a donor that did not have autoimmune markers checked during the pre-transplantation evaluation were excluded. Serum autoantibodies including antinuclear antibodies (ANA), antimitochondrial antibody (AMA), and anti-smooth muscle antibody (ASMA) were detected by indirect immunofluorescence. A positive antibody screen was defined by an ANA titer greater than or equal to 1:40 or anti-smooth muscle antibody greater than 1:20. Post-transplantation complications including rejection, biliary strictures, infection, post-transplantation lymphoproliferative disorder, bleeding, thrombosis, and portal vein stenosis were collected manually with chart review. Rejection was confirmed with a liver biopsy. The study was approved by our site’s Institutional Review Board.

Differences among post-transplant liver recipient outcomes between positive and negative autoantibody groups were assessed by a Fisher’s exact test to compare the dichotomous variables. Continuous variables were compared using independent unpaired t-tests. A Mantel-Haenszel chi-squared test with continuity correction was used to check for interaction between the cause of transplantation and post-transplant outcomes. Data analysis was performed with R statistical package, version 3.6.2.

During the study period, a total of 172 living donor liver transplantations were performed at our center (Figure 1). There were 20 pediatric recipients and 37 did not have donor autoantibodies checked during the pre-transplantation evaluation and were excluded. Of the remaining 115 individuals, 78 (68%) donors had no detectable autoantibody titers while 37 (32%) donors had a positive autoantibody titer including 23 with a positive ANA, 11 with a positive ASMA, and 3 donors with both a positive ANA and ASMA. As shown in Figure 2, the median ANA titer was 1:160 (range 1:80 to 1:1280). The median ASMA was 1:40 (range 1:20 to 1:160). No donors were found to have a positive AMA. 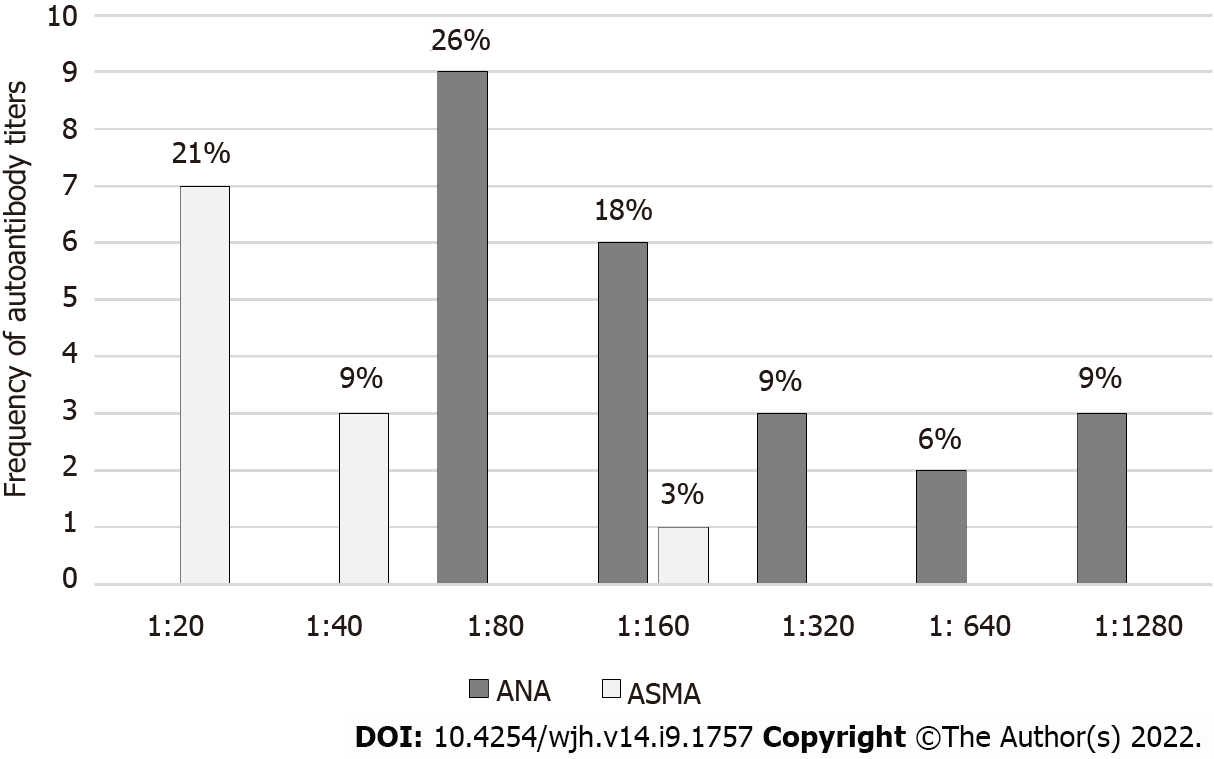 Initial immunosuppressive regimens were similar for both groups. The standard immunosuppression protocol consisted of induction with thymoglobulin followed by the initiation of tacrolimus, mycophenolate, and prednisone. Mycophenolate was not started in 12 patients due to the development of bacteremia following transplant. Five were started on cyclosporine instead of tacrolimus due to a history of seizures or witnessed neurological changes after starting tacrolimus. One was switched from tacrolimus to cyclosporine after developing acute tubular necrosis requiring the initiation of hemodialysis. One individual was started only on prednisone as her liver donor was also her donor for her prior bone marrow transplant.

Recipients were followed on average for 2.6 years with a standard deviation of 1.8 years. Acute rejection occurred in 21 (18%) individuals. Two (2%) developed plasma cell rich rejection. The remaining 19 (17%) developed acute cellular rejection. 15 individuals had a single episode of rejection, 5 had 2 episodes, and 1 had 3 episodes. Most of the episodes of rejection were mild (15) with fewer cases of mild-moderate (2), moderate (4), or severe (2). Acute cellular rejection occurred on average 7.3 mo after transplantation with a standard deviation of 10.1 mo and range of 6 days to 13.8 mo. Two had developed allograft rejection in the setting of medication non-adherence. All patients were admitted for episodes of rejection. Of the 21 patients that developed rejection, 17 were treated with 1000 mg of IV methylprednisolone followed by an oral prednisone taper and adjustment in their long-term immunosuppression regimen. One patient was treated with a prednisone and immunosuppression dose increase, two were treated with lower doses of IV methylprednisolone, and one was switched to different immunosuppression agents. No patients included within the study timeframe developed chronic rejection.

Twelve (10%) recipients died following transplantation. Causes of death included septic shock (4), COVID-19 pneumonia (1), recurrent cirrhosis in the setting of medication non-adherence and pneumocystis jiroveii pneumonia (1), malignancy (3), intracranial hemorrhage (1), massive PE (1), and unknown (1). Of these, two recipients died during the index admission. The median length of survival of those who died was 1.3 years (range 4 d to 4.9 years).

The principal findings of this study are that positive autoantibodies commonly associated with liver disease in donors are not correlated to higher rates of complications including rejection or stricture development.

In lung, kidney, and heart transplants, various non-HLA antibodies have been associated to worse graft outcomes. Proposed mechanisms of injury include the induction of cell lysis via activation of the complement cascade upon antibody binding and tissue damage associated with ischemia-reperfusion, vascular injury, and rejection creates permissive conditions for autoantigens and allows for autoantibodies to bind to antigenic targets to further cause vascular inflammation and organ dysfunction. However, these findings have largely not been replicated in liver transplantations[14].

There is some data suggesting that autoantibodies are correlated to the development of de novo autoimmune hepatitis or plasma cell rich rejection. Autoimmune hepatitis has been estimated to recur in 17%-42% of patients post transplantation with a median time to recurrence of approximately 4.6 years[17]. In our experience, the 2 (2%) individuals that developed plasma cell rich rejection received livers from autoantibody negative donors. No recipients developed a reoccurrence of autoimmune hepatitis. Re-transplantation indications in our study were predominately related to thrombotic events.

The positive autoantibody group in this study consisted of those with positive ANA and ASMA. ANA is a nonspecific marker with estimated sensitivity and specificity of 0.65 and 0.75 for autoimmune hepatitis[18]. Up to 75% of ANA-positive individuals have no identifiable disease and ASMA can be present in up to 43% of normal healthy individuals, whereas AMA is estimated to be present in less than 1%17. None of the donors in our study were found to have a positive AMA, which would have been a more specific marker of disease. The presence of autoantibodies in healthy individuals is common with an estimated prevalence of 25%-28% in the general population[2,20]; however, the presence of an autoantibody does not necessarily indicate the presence of an autoimmune disease or its severity. The prevalence of pre-transplant autoantibodies in donors in our study was 34%, similar to that of the general population. In disease, autoantibodies are considered pathological although the mechanism in which they result in disease is poorly understood[19]. It remains unclear whether they are primary or secondary consequences of the underlying process. As none of the donors with positive autoantibodies in this study were found to have liver disease, it is possible that the autoantibodies in these individuals are not pathogenic in of themselves.

Several limitations of our study must be acknowledged. This study was retrospective in nature and included a single center allowing a risk of type II error. Whether the results would be generalizable to a broader population would require a multi-center prospective study. Furthermore, due to the timeframe of the study, it is possible that some patients might develop strictures, rejection, or other complications that were not yet diagnosed over the duration of this study. The mean time to recurrence of autoimmune hepatitis has been reported to be 4.5 years, but may occur as early as 45 d after liver transplantation with the rate increasing with postsurgical interval. On average, patients were followed for 2.6 years following transplantation. In their study, Dbouk et al[9] examined the impact of age, race, sex, and autoimmune titer levels on recurrence rates or death, and found that African Americans were at a higher risk of, recurrence and death compared to other ethnic groups. Due to the predominantly Caucasian patient population skew in our cohort, we were unable to factor in race into our analysis. We also acknowledge that some donors were excluded due to lack of measurement of pre-transplant autoantibody titers. Despite this limitation, we believe our results provide a foundation for subsequent prospective multicenter studies.

In conclusion, we presented data on post-transplantation outcomes for 115 patients who received living liver donor transplants at our center. Patients were followed for an average of 2.6 years with patient survival of 90%. We found that patients who received transplants from autoantibody positive donors had similar rates of complications including strictures, death, and rejection to patients who received transplants from autoantibody negative donors. Our results expand upon existing literature suggesting that autoantibody positivity in asymptomatic donors is not correlated to worse transplant outcomes and should not preclude donation. Larger prospective studies with longer lengths of follow-up are needed to identify whether these results can be broadly applied to a wider population and whether other factors such as ethnicity or socioeconomic status may play a role in long-term transplantation outcomes.

The donor pool for liver transplantations remains limited and living liver donors help bridge the gap. It is therefore important to know whether positive autoantibodies in living donors have an effect on post-transplant outcomes and whether they should pose a barrier to transplantation.

The objective of this study was to analyze the significance of positive autoantibodies in donors on post-transplant outcomes and complications in recipients including rates of mortality, mortality, biliary strictures, biliary leaks, infection, and rejection.

This retrospective study included all patients above the age of 18 who underwent living liver donor transplantations at our center over a nine-year period (2012-20201). Demographic data and autoantibody titers were collected and analyzed to determine if they were associated with worse post-transplantation outcomes, including higher rates of mortality, biliary strictures, biliary leaks, infection, or rejection.

Positive autoantibodies commonly associated with liver disease in donors were not correlated to higher rates of post-transplantation complications.

Our results expand upon existing literature suggesting that autoantibody positivity in asymptomatic donors is not correlated to worse transplant outcomes and should not preclude donation in living donor liver transplantations.

Larger prospective studies with longer lengths of follow-up are needed to identify whether these results can be broadly applied to a wider population and whether other factors such as ethnicity or socioeconomic status may play a role in long-term transplantation outcomes.