To compare the efficacy and safety of once-daily prolonged release tacrolimus compared to twice-daily tacrolimus in liver transplantation patients.

Seven studies included with 965 patients. All the included studies were of moderate quality according to the risk of bias assessment using Cochrane Risk of Bias tool. Biopsy-proven acute rejection was reported in four studies, and pooled analysis of those studies indicated similar rejections in both twice daily and once daily tacrolimus groups (risk ratio: 1.06, 95%CI: 0.84-1.34, n = 758, I2 = 0%) and also we found no significant difference between both groups for renal outcome (serum creatinine; mean difference, 0.001 mg/dL, 95%CI: -0.042 to 0.043, n = 846, = 18.6%). Similarly, there was similar number of adverse events such as hypertension, headache, back pain, blood related disorders, infections and nausea observed in both groups.

The analysis findings confirm that both once daily and twice daily tacrolimus formulations are comparable in terms of efficacy and safety outcomes.

Core Tip: Tacrolimus, a calcineurin inhibitor is an important component of the immunosuppressive regimens post liver transplantation. Compliance to immuno-suppression treatment generally is important and non-adherence is a major risk factor of graft rejection and loss. Compliance to medication declines over the course of time in patients after liver transplantation due to several factors and this contributes to about 20% of late acute rejection. The efficacy of once daily tacrolimus regimens has been reported in many studies and this systematic review/meta-analysis confirmed the evidence of comparable efficacy and safety of prolonged release tacrolimus to the twice daily immediate release formulation.

Compliance to medication declines over the course of time in patients after LT due to several factors including the number of drugs to consume and the rate of rejection/infections increases. Previous reviews directed at recipients transplanted between the late 1980s and mid-2000s showed that the prevalence of non-adherence to immunosuppressive medications averaged about 25%. This non-adherence to medications was felt to contribute to about 20% of late acute rejection episodes and 16%-36% of graft losses[3]. To maintain good adherence, less frequently administering regimen were proved to be effective[4].

Recently, tacrolimus once-daily prolonged-release (PR) formulation was developed. Based on the previous literature, it was evident that conversion from the twice-daily, immediate release (IR) to PR tacrolimus was well tolerated, safe and conveniently used in stable patients after LT[5,6]. However, there is no systematic review that has been conducted till date to confirm the efficacy and safety of PR tacrolimus compared to IR tacrolimus.

This systematic review and meta-analysis was performed according to Cochrane Collaboration[7] and Preferred Reporting Items for Systematic Reviews and Meta-Analyses Statement[8].

Studies were excluded if they had patients with a previous organ transplant other than liver and multiple organ transplantations. Studies also conducted on paediatric population and lack of a control group (the study had only included patients who received once daily tacrolimus. We also excluded studies only assessed pharmacokinetics of tacrolimus. Finally, studies without full-text such as conference proceedings, editorials, reviews, secondary analyses and letters excluded.

Outcomes: Efficacy was measured as the rate of treatment failure indicated by biopsy-proven acute rejection (BPAR), liver graft loss, or death while safety was assessed by the incidence of adverse events.

Two reviewers independently (KB and RT) screened the identified studies according to the aforementioned criteria and excluded studies that were found to be clearly irrelevant. We obtained the full text of the remaining studies and the same two reviewers screened full texts and selected trials for inclusion. The same two reviewers independently extracted data from included trials into the predesigned and validated data collection form. Disagreements were resolved by arbitration, and consensus was reached after discussion. We collected study characteristics (type of design with duration of intervention and methods), baseline demographics, and efficacy and safety outcome data from each included trial.

Two reviewers (KB and RT) independently assessed quality of included studies using Cochrane Risk of Bias tool[9], and disagreements were resolved by discussion. If a consensus could not be reached, any discrepancy was resolved by a senior author. Seven domains of quality assessment included random sequence generation, allocation concealment, blinding of participants and personnel, blinding of outcome assessment, incomplete outcome data, selective reporting, and other sources of bias.

We performed statistical analysis using Comprehensive Meta-analysis Version 3.0[10]. We reported the results as risk ratio with 95% confidence interval (CI) for dichotomous data and continuous data as mean difference. We used a random-effects model to combine individual results regardless whether there was significant heterogeneity or not. We tested heterogeneity among trial results using the I2 statistic[7]. We considered a value greater than 50% as substantial heterogeneity. Publication bias was not assessed due to limited number of included studies in this review.

A total of 701 articles from databases search and 15 from additional searches identified. After removing duplicates 543 studies remained for screening. Upon screening titles and abstracts, 490 clearly irrelevant articles removed. The remaining 48 articles subjected to full text screening. Finally, seven clinical trials met the inclusion criteria[11-17]. The flow of the randomised controlled trial included in our analysis is shown in Figure 1.

A total of seven clinical trials were included with 965 patients. Study characteristics were summarized in Table 1. Studies included are conducted in various countries including United States, Japan, United Kingdom, and one study in another 16 countries.

The mean age of included patients was 52.8 years and majority (71%) of them were males. Four studies had follow-up for one year while the other two had follow up for 3 and 6 mo. In four studies, concomitant treatment with mycophenolate mofetil and steroids was allowed. All the included studies were of moderate quality according to the risk of bias assessment using Cochrane Risk of Bias tool (Figure 2). 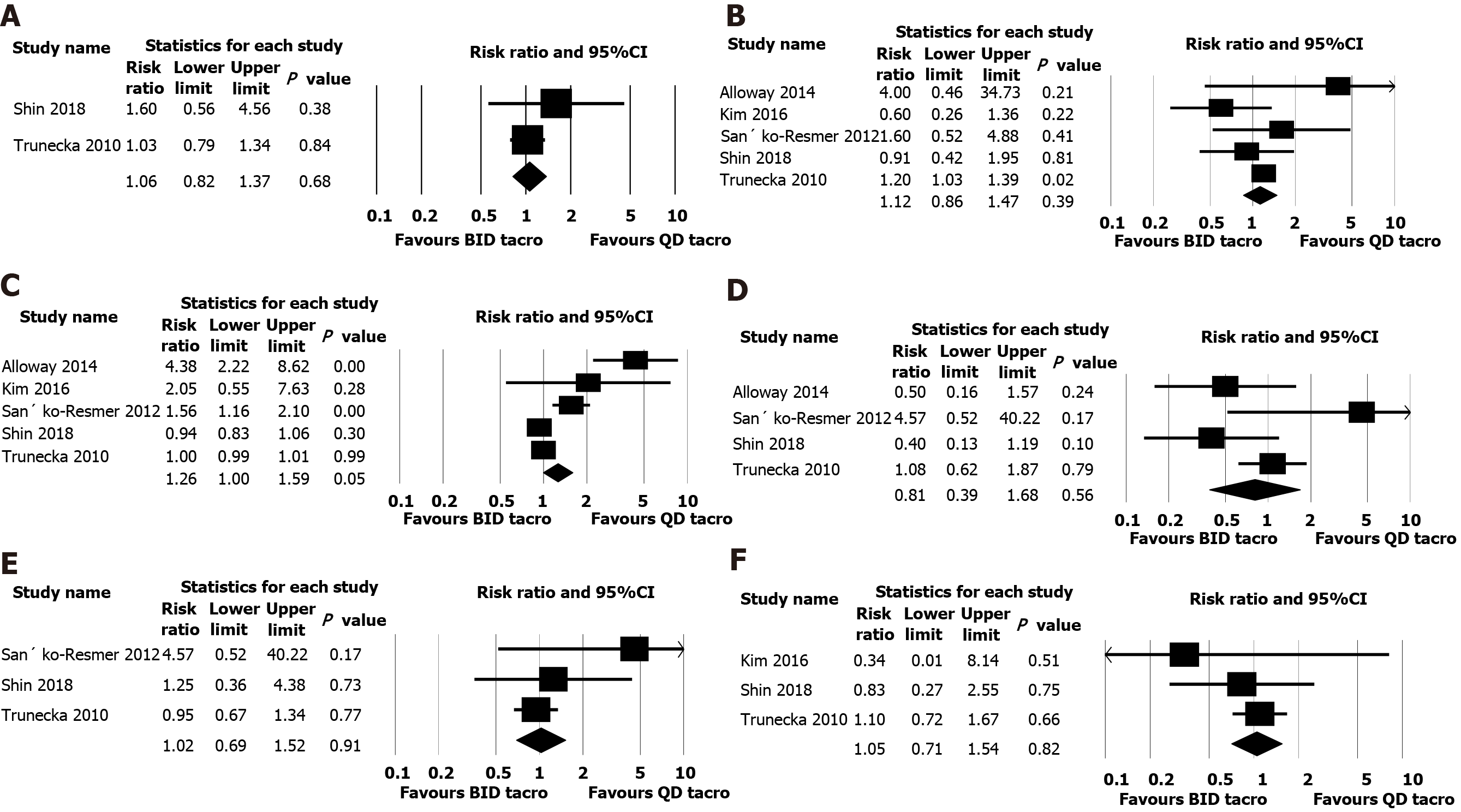 This systematic review and meta-analysis compared PR tacrolimus to IR tacrolimus in LT recipients. The efficacy and safety outcomes were found to be similar for both regimens.

Adherence to the immunosuppressant regimen post-LT is important for preventing rejection and graft loss. The reported rate of non-adherence to immunosuppressant regimens is 15%-40%, which could lead to significantly higher rate of graft rejection, graft loss and severe impact on long-term survival[18]. It was observed that once daily tacrolimus is safe and is associated with better adherence and low variability of liver function tests[18,19].

The results of recently published systematic review showed that PR tacrolimus when compared to the IR tacrolimus resulted in no significant difference in the glomerular filtration rate, BPAR and the safety outcomes among the kidney transplant recipients[21]. The findings of our review are also in congruent with the previous review. In contrast, another meta-analysis based on combination of two clinical trials and four observational studies found that once daily tacrolimus is effective for the first year after liver transplantation, however, there was no significant difference in 1-year mortality and adverse events between once daily and twice daily tacrolimus groups[22].

PR tacrolimus has been introduced as helpful therapeutic option to increase the patient adherence to immunosuppressive treatment. Studies with short follow-up and pharmacokinetic evaluation were not included in this review, however one study which evaluated pharmacokinetic outcomes along with efficacy outcomes showed similar BPAR, graft losses and safety outcomes such as hypertension, infections and blood related disorders[16] between groups. Of the included studies in our systematic review, four reported concomitant immunosuppressant therapies administration such as corticosteroids, and mycophenolate mofetil. It was evident that those concomitant drugs have negative association with occurred adverse events with tacrolimus[23]. An eight years long-term follow up study based on European Liver Transplant Registry has recently been published study and the findings were in favour of PR in terms of graft losses and acute rejections. This very large population study also reported better outcome in those converted from IR to PR tacrolimus after 1 mo compared to those maintained on IR tacrolimus-based immunosuppression. They concluded that patients on PR tacrolimus continues to provide ongoing benefits for graft and patient survival beyond 3 years post transplantation[24]. The major limitation of the study, were the lack of data on the dosages and the trough levels of tacrolimus were not captured. In addition, the lack of clarity on the IR tacrolimus preparations the cohort received. The retrospective design of the study was the main reason for its exclusion in our analyses as it did not meet the eligibility criteria.

The major strength of our study is that, we have only included clinical trials of long-term follow-up to address efficacy and safety of PR tacrolimus. There was no heterogeneity found for all the outcomes assessed, except for any adverse events. One of the limitations of our review is that, we have only included studies published in English language, which means some of the studies published in other language might have been missed. Publication bias assessment was also not assessed due to less than ten studies included in the analysis, however due to our intense search effort it was evident that we did not miss any study meeting this review’s eligibility criteria. Majority of the studies were of open-label design, that could have introduced bias, however this could not be avoided due to the nature of administration. In addition, the paucity of studies of PR tacrolimus in Asian patients renders data from this review of high interest to the transplant community.

Our systematic review and meta-analysis indicate that both PR and IR tacrolimus formulations are comparable in terms of efficacy and safety outcomes. However, to confirm these findings, long-term follow-up randomized controlled trials with large sample sizes are required. Also, to assess acceptability by patients, quality of life and economic evaluations should be conducted.

Tacrolimus, a calcineurin inhibitor is an important immunosuppressive medication post liver transplantation. Compliance to immunosuppression is important and non-adherence can lead to rejection and graft loss. To maintain good adherence, less frequently administering regimen were proved to be effective.

Our objective was to conduct a metanalysis and systematic review of the published clinical trials that studied the safety and efficacy of PR tacrolimus compared to immediate release tacrolimus.

Seven studies included with 965 patients. All the included studies were of moderate quality according to the risk of bias assessment using Cochrane Risk of Bias tool. Biopsy-proven acute rejection was reported in four studies, and pooled analysis of those studies indicated similar rejections in both twice daily and once daily tacrolimus groups. We also found no significant difference between both groups for renal outcome (serum creatinine; mean difference, 0.001 mg/dL, 95%CI: -0.042 to 0.043, n = 846, I2 = 18.6%). Similarly, there was similar number of adverse events such as hypertension, headache, back pain, blood related disorders, infections and nausea observed in both groups.

The analysis findings confirm that both once daily and twice daily tacrolimus formulations are comparable in terms of efficacy and safety outcomes.

Long-term follow-up randomized controlled trials with large sample sizes are required. Also, to assess acceptability by patients, quality of life and economic evaluations should be conducted.