Portal vein thrombosis (PVT) after liver transplantation (LT) is an uncommon complication with potential for significant morbidity and mortality that transplant providers should be cognizant of. Recognizing subtle changes in post-operative ultrasounds that could herald but do not definitively diagnose PVT is paramount.

Core tip: Acute portal vein thrombosis (PVT) after liver transplant is uncommon but can cause significant morbidity and mortality. PVT can present with subtle ultrasound abnormalities in the hepatic artery, such as decreased resistive indices and increased diastolic flows, in the absence of frank thrombosis in the portal vein. Long term portal vein patency has been seen with percutaneous thrombolysis, angioplasty, and stent placement as treatment.

Acute portal vein thrombosis (PVT) after liver transplantation (LT) is an uncommon yet consequential complication with potential for significant morbidity and mortality. The incidence of PVT after LT varies, however most case series report occurrences in 1%-3% of patients[1-4]. Similarly, presentations of this condition vary, with case reports documenting abnormalities in liver function tests to signs of portal hypertension as initial signs of PVT[1,3,4]. While the diagnosis can often be readily made with ultrasound, recognizing subtle changes in routine post-operative ultrasounds that herald but do not definitively diagnose portal venous abnormalities is paramount. Furthermore, no rigorous studies have determined the most optimal treatment for PVT post-LT. We report a case of acute PVT post-LT in a patient who developed subtle vascular changes on serial ultrasounds. The patient required percutaneous thrombolysis, angioplasty, and ultimately stenting of the portal vein, a rarely reported treatment for acute PVT after LT.

A 30-year-old woman presented to an outside hospital with painless jaundice. She had no other complaints. Her past medical history was notable for alcohol use disorder. She had no prior surgeries, was not on any medications, had no allergies, and denied cigarette or illegal drug use. She had no family history of liver disease. She was then transferred to our institution for consideration for LT.

At our institution, her vital signs were notable for fever, tachycardia, and hypotension. On physical exam, she appeared diffusely jaundiced and confused. She was oriented to person but not to time or place, and she was noted to have asterixis. Her abdomen was non-tender but distended, and a fluid wave was present. She had scleral icterus, numerous spider angiomata on her chest, and 3+ bilateral lower extremity edema. Her initial laboratories are found in Table 1. She had a MELD-Na score of 44 and a Maddrey’s discriminant function of 105.5. In addition, she had a negative work-up for acute viral hepatitis, Wilson’s disease, and autoimmune hepatitis. She was cytomegalovirus (CMV) IgG positive but IgM negative. A liver MRI with and without contrast was notable for a cirrhotic appearing liver without evidence of PVT. She was ultimately diagnosed with alcoholic hepatitis with underlying alcohol cirrhosis.

She was evaluated and subsequently listed for LT at our center. On the third day of admission, she received a CMV donor positive deceased donor orthotopic liver transplant. The operation was described as uneventful with no technical complications.

On post-operative day (POD) #1 her clinical condition improved with successful weaning of her vasopressor and ventilator support. Liver doppler ultrasound showed a patent portal vein in the hilar region, with hepatopetal flow, but low velocity at 12 cm/s (normal 16-40 cm/s)[5]. The hepatic arteries were patent, with high diastolic flows and resultant low resistive indices in the right and left hepatic arteries (0.35-0.44, normal 0.55-0.7), shown in Figure 1[5]. Her post-operative laboratories are listed in Table 2. 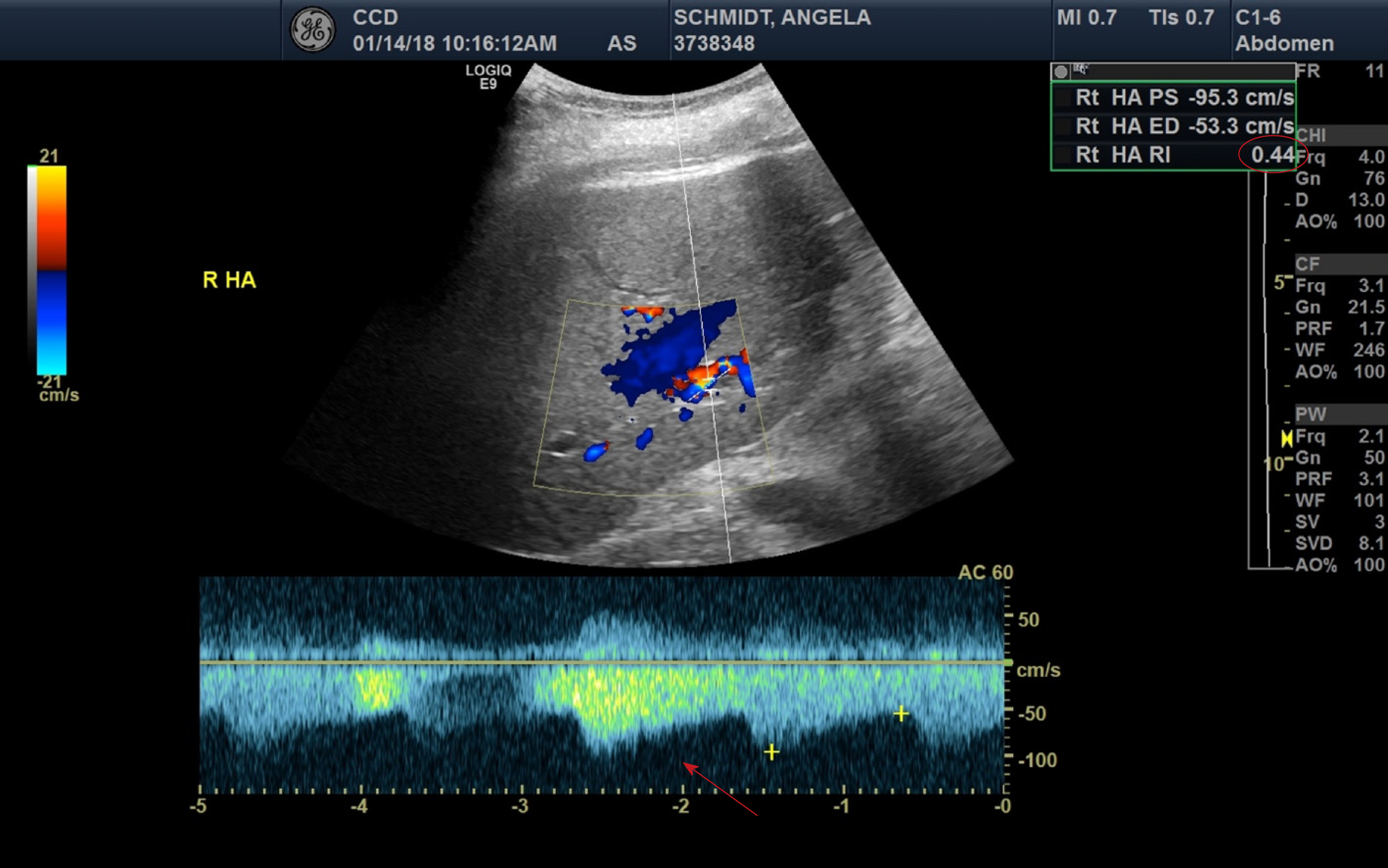 Given the persistency of the abnormal hepatic arterial wave forms and new reversal of flow in the left portal vein, further evaluation of the transplant vasculature was performed with computed tomography (CT) of her abdomen and pelvis with and without contrast. The CT showed unremarkable arterial anatomy and non-opacification of a long extra-hepatic segment of the portal vein, shown in Figure 2, indicating acute PVT. 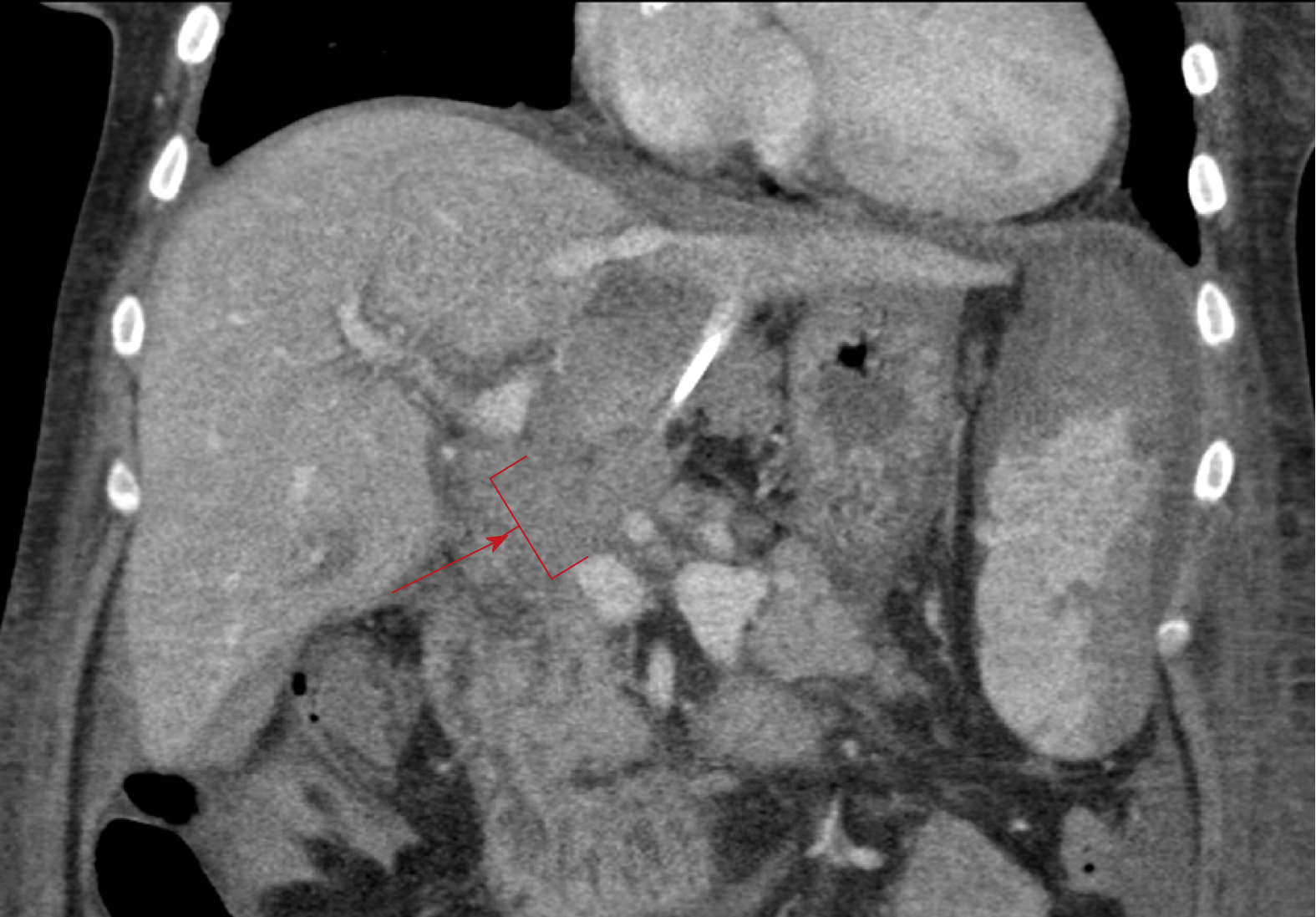 The patient then underwent emergent percutaneous venography. Figure 3 shows her pre-intervention venography, notable for PVT. Eight milligrams of tissue plasminogen activator (tPA) were injected at the thrombus site, angioplasty was performed with a 12 mm x 40 mm balloon, and an uncovered 14 mm x 40 mm stent was deployed in the main portal vein, which successfully eradicated the PVT. In addition, coils were deployed into the inferior mesenteric vein to prevent hepatofugal shunting of blood flow (Figure 4). The patient was also started on aspirin 81 mg once daily to prevent stent thrombosis. 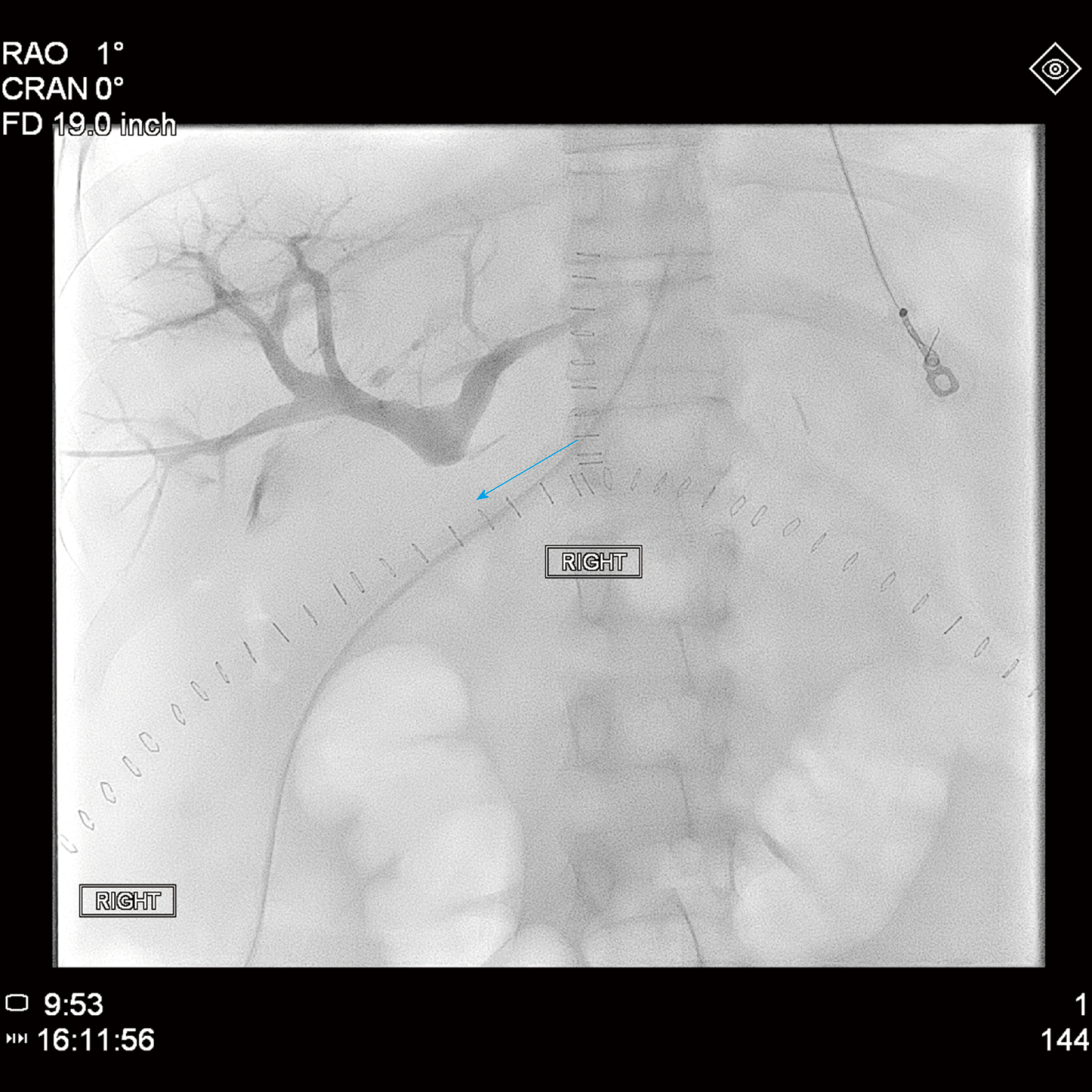 Figure 3 Pre-intervention venography, with the blue arrow denoting the beginning of the patient’s portal vein thrombosis. 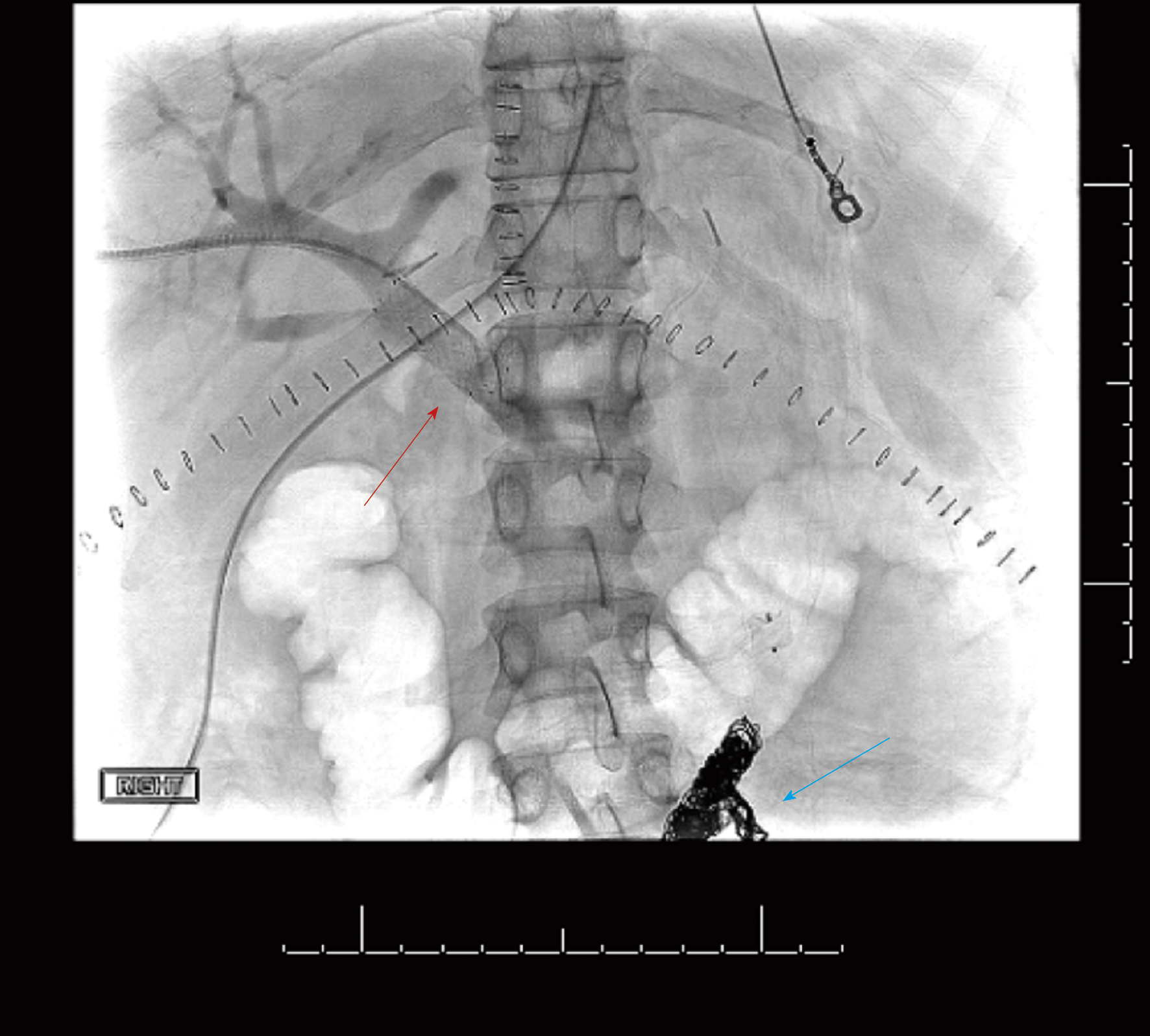 Figure 4 Post-intervention venography, with the red arrow showing recanalization of the portal vein and the uncovered stent, and the blue arrow indicating the coils placed in the inferior mesenteric vein.

This patient’s follow-up ultrasound showed a patent portal vein with visualization of hilar and retropancreatic segments and normalization of the flow and direction of the left portal vein and velocities. The hepatic resistive indices improved significantly. Her graft function improved to normal by time of discharge (Table 2).

Reports of acute PVT post-LT typically state an incidence rate of 1%-3%, however one case series of adult and pediatric patients documented an incidence of 5.7%[2-4]. While PVT in this scenario can present with hepatic enzyme abnormalities, relying on laboratory derangements to screen for PVT in the acute post-operative period is unreliable given that hepatic enzyme laboratories are often abnormal during this time. PVT post-LT can also present with sequelae of portal hypertension, including ascites, variceal formation, and hemorrhage[1]. Graft failure and re-transplantation, although rare, have been reported in cases of acute PVT post-LT[1,2].

Prevalence rates vary for PVT in other populations, with one study reporting a prevalence rate of 1.0% in the general population at time of autopsy, and other studies documenting PVT in 1.0%-26.0% of patients with cirrhosis[6-10]. Risk factors for PVT include hypercoagulable states (such as malignancy or genetic defects), LT, increased portal vein resistance, and decreased portal vein flow[11-17]. PVT can be classified several different ways, including according to the degree of portal vein occlusion, whether it is acute or chronic, its anatomic extent, and whether it is associated with cavernoma formation[18-20].

Because of the potential ramifications of vascular complications post-LT (including both PVT and hepatic artery stenosis or thrombosis), routine serial ultrasounds in the immediate post-operative period are often employed after LT based on surgical practice. The high diastolic flows and low resistive indices seen in the patient’s hepatic arteries were the first clues that portal venous dysfunction may have been present. PVT is a known etiology of decreased hepatic artery resistive index (RI)[21]. Resistive index is the difference between the peak systolic and end diastolic velocities divided by the peak systolic velocity, and low RI is defined as < 0.55[5]. The mechanism of reduced RI in PVT is explained by the disparate dual blood supply to the liver. If thrombosis occurs within the portal vein, the hepatic artery must compensate and supply more blood to the liver; in order to increase perfusion through the hepatic artery, resistance must decrease, which is accomplished by increasing hepatic arterial diastolic flow[5]. The sensitivity and specificity for these findings in PVT are sub-optimal and vary, ranging from 73%-83% and 60%-73%, respectively[22]. While the hepatic arterial abnormalities seen on this patient’s ultrasound can often indicate hepatic artery stenosis, noticeable arterial narrowing was not visualized on the patient’s ultrasounds or CT scan. The sonographic findings were initially presumed to be due to her recent post-operative status and possible arterial anastomotic edema given her clinical improvement and lack of stenoses and/or thromboses seen in the hepatic arteries or portal veins on ultrasound.

Further workup during her first two PODs, such as an angiogram or CT scan, was not performed due to her continued clinical improvement, including improvement of her liver synthetic function as noted in the INR trend on Table 2. CT scan without an angiogram component was ultimately performed because of the newly discovered hepatofugal flow of the left hepatic vein on POD #3 which was concerning for PVT.

While no inherited hypercoagulability testing was done for this patient as her PVT was presumed to be secondary to the hypercoagulable state of surgery and because LT is a known risk factor for PVT, case reports exist documenting PVT in the setting of acute CMV infection in immunocompromised and immunocompetent patients, likely due to local inflammation and the development of anti-phospholipid antibodies[23-27]. Although pre-LT testing confirmed that the patient was not actively infected with CMV and had immunity, the donor was CMV IgG positive. Transplant providers should be aware of the association between PVT and CMV, particularly in CMV donor positive/recipient negative patients and in the setting of immunosup-pression.

The sensitivity and specificity for ultrasound diagnosis of PVT are better than the aforementioned secondary hepatic artery findings, with estimates of 80%-100% for both parameters[18]. However, the Doppler exams for this patient were falsely negative for PVT, showing main portal vein patency in the hilar region. This may have been because the entire portal vein is not always visualized on the ultrasound, due to artifact from bowel gas and/or lack of adequate window on immediate postoperative days. To the best of our knowledge, this is the first case report post-LT that details these ultrasound findings as the presenting signs of acute PVT.

Anticoagulation is generally recommended for patients diagnosed with acute PVT even though there are no randomized controlled trials assessing this intervention. Early anticoagulation has been shown to lead to higher recanalization rates and prevent intestinal infarction compared to no anticoagulation, however it is unknown if these data apply to post-LT patients[28]. Of note, no rigorous studies have assessed the efficacy of thrombolysis, angioplasty, and stent placement in patients with PVT, although rare case reports exist documenting these treatments after liver transplant with long term portal vein patency[1,20,29,30].

Acute PVT is a rare and serious complication of LT. While ultrasound has a sensitivity and specificity between 80%-100% for diagnosing PVT, false negative results can occur; subtle findings on ultrasound, however, such as high diastolic flows and low resistive indices, can indicate that PVT may be present. A low threshold to perform more accurate diagnostic imaging should be employed if these ultrasound abnormalities are seen. Thrombolysis, angioplasty, and portal venous stent placement, although rare, have been successfully implemented as treatment for PVT post-LT. The optimal follow-up imaging regimen and anti-platelet or anticoagulation regimen is unknown and warrants further investigation.