Metastatic hepatic malignancies are encountered more frequently (approximately 18-40 times) than primary liver cancers[1]. Among such malignancies, metastatic hepatic leiomyosarcoma is a rare malignant smooth muscle tumor (SMT). The hepatic metastasis associated with primary female genital system arises not only in leiomyosarcoma but also in other SMTs including leiomyoma and smooth uterine muscle of uncertain malignant potential (STUMP)[2,3]. However, STUMP usually does not metastasize because it is a mesenchymal uterine tumor lying between benign leiomyomas and leiomyosarcomas[4]. We herein report a case of metastatic hepatic leiomyosarcoma associated with STUMP in a broad ligament. A pure laparoscopic partial liver resection was performed successfully.

A 68-year-old female who had been admitted to another facility presented with a liver mass, which was palpable from the body surface. She had non-alcoholic steatohepatitis (NASH) and cholelithiasis in her past medical history. She underwent hysterectomy for uterine leiomyoma 21 years earlier and left salpingo-oophorectomy for an ovary tumor with STUMP in a broad ligament 6 years earlier.

Her laboratory tests showed a mild dysfunction of aspartate aminotransferase (AST) and alanine aminotransferase (ALT) which would be consistent with suspected NASH. She had no hepatitis virus infection, and tumor markers including alpha-fetoprotein and protein induced by vitamin K absence-2 (PIVKA-2) were negative. Ultrasonography of the liver showed a hypoechoic smooth mass (60 mm × 40 mm) with a heterogeneous hyperechoic region in the median section of the left lobe of the liver (Segment 4) (Figure 1A). Contrast-enhanced computed tomography (CE-CT) and ethoxybenzyl-magnetic resonance imaging (EOB-MRI) showed a heterogeneous mass enhancement (Figure 1B and C). Though fluorodeoxyglucose-positron emission tomography (FDG-PET) also showed obvious metabolically active foci (Figure 1D), no other abnormal metabolically active foci were detected in addition to the lesion. 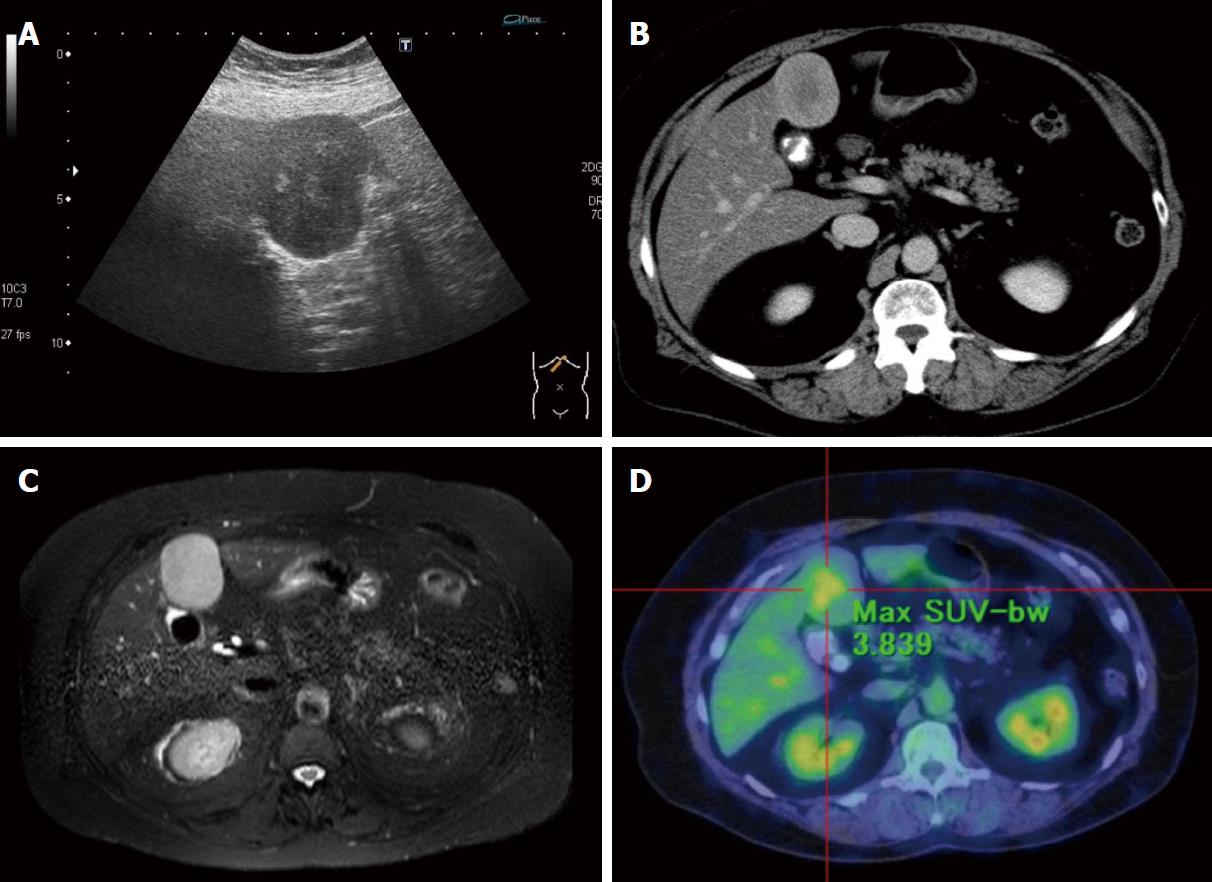 Figure 1 Evaluation of clinical findings. A: Ultrasonography of the liver showed a very-low-echoic smooth mass (60 mm × 40 mm) with a heterogeneous high-echoic region in the median section of the left lobe of the liver (Segment 4); B: Axial delayed phase CE-CT showed the lesion to be gradually enhanced heterogeneously; C: The lesion showed a hyperintense heterogeneous region on axial T2-weighted EOB-MRI; D: The lesion showed obvious metabolically active foci by 18-fluorodeoxyglucose-PET-CT evaluation, while other lesions were not detected.

Though the clinical findings did not lead to a preoperative diagnosis because of the non-specific characteristics, malignant liver tumor was strongly suspected and a pure laparoscopic partial liver resection was performed. Briefly, 5 ports were placed with the patient in the supine position. Three ports were placed in the epigastric region. The other 2 ports were placed in the umbilicus and left lateral abdominal region (Figure 2A). As for the liver resection, we performed ultrasound-guided pure laparoscopic partial liver resection with vessel-sealing devices using the crush clamping method and Pringle maneuver (Figure 2B). The resected partial liver was retrieved from the umbilical port with auxiliary incision. The surgical specimen showed a white colored solid mass with smooth surface (Figure 2C and D). 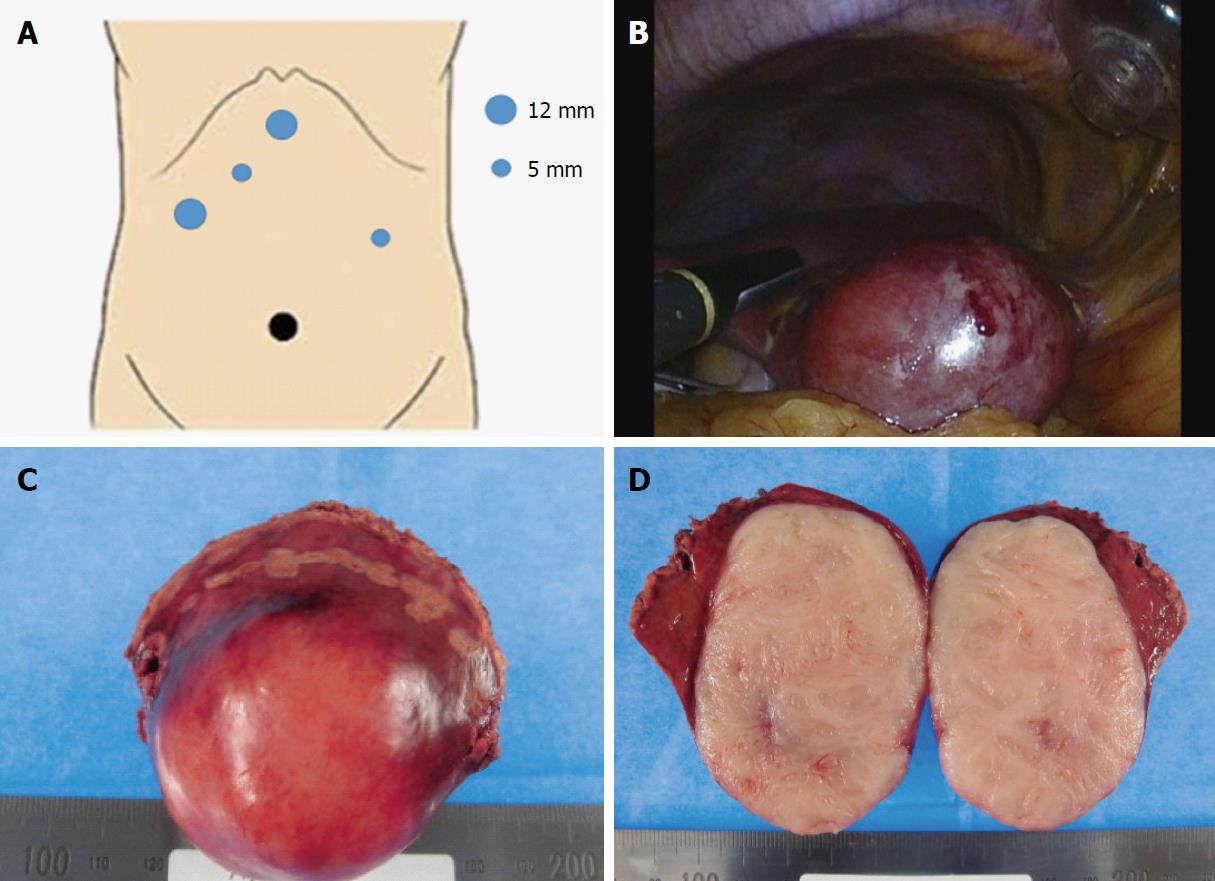 Hematoxylin and eosin (H-E) stain showed the proliferation of spindle-shaped cells with enlarged nuclei and eosinophilic cytoplasm, and the cells exhibited diffuse moderate-to-severe atypia and multiple mitoses. The mitotic count activity showed the presence of more than 10 mitotic figures (MFs)/10 high power fields (HPFs) (Figure 3A). Immunohistochemical findings were strongly positive for smooth muscle actin (SMA) and desmin, and negative for c-kit (Figure 3B-D). In addition, the expressions of cluster of differentiation 34 (CD34) and s-100 were negative (data not shown). Moreover, more than 10% ki-67 positive cells were seen in the lesion (Figure 3E).

Next, we histologically reconfirmed the past resected specimens including uterus and broad ligament specimens to explore the primary lesion. In the uterus, MFs were absent, and the ki-67 proliferation-index (MIB-1) was zero (Figure 4A-1 and 4B-1). The pathological findings of MFs and the MIB-1 index showed malignant transformation from STUMP to leiomyosarcoma (Figure 4A-2 and A-3) (Figure 4B-2 and B-3). The final diagnosis was STUMP in a broad ligament that developed into metastatic hepatic leiomyosarcoma over a period of 6 years.

She was discharged 8 d after the operation without any complications, and she was not received adjuvant systemic treatment. However, follow-up CE-CT and EOB-MRI studies showed recurrent metastatic hepatic leiomyosarcoma in the edge of Segment 5 (12 mm × 9 mm) 7 mo after the initial surgery. We performed pure laparoscopic partial resection with these procedures safely in both primary and secondary resections because of the minimum postoperative abdominal adhesions. No evident disease recurrence has been seen in the 4 mo since the secondary surgery.

SMTs are broadly categorized into 6 major histological types: leiomyoma, mitotically active leiomyoma, cellular leiomyoma, atypical leiomyoma, STUMP and leiomyosarcoma. SMTs are diagnosed based on the assessment of three histopathological characteristics: Mitotic count activity (MFs/10 HPFs), the presence or absence of coagulative tumor cell necrosis, and the degree of cytological atypia, and the histopathological features determine the difference between benign leiomyomas and malignant leiomyosarcomas[5]. In addition, Mayerhofer et al[6] indicated that the expression of ki-67 in SMTs may be a useful immunohistochemical parameter for distinguishing between malignant histology and borderline histology. However, it is difficult to categorize them clearly because there are various opinions regarding the pathological diagnostic criteria of SMTs.

There is general acceptance of the notion that STUMP has characteristics lying between benign leiomyomas and leiomyosarcomas[5,7]. In fact, the WHO classification also indicates that STUMP is difficult to unequivocally diagnose as benign or malignant[2]. The criteria used for the diagnosis of STUMP were the presence of coagulative necrosis, low mitotic count (less than or equal to 10 per 10 HPFs) and the absence of atypia, or a mitotic count greater than 10 per 10 HPFs, focal mild to moderate atypia in the absence of coagulative necrosis, or a mitotic count equal to or less than 10 per 10 HPFs, and focal moderate-to-severe atypia in the absence of coagulative necrosis[8]. It is known that STUMP occurs in broad ligaments as well as the uterus. STUMP in broad ligaments is very rare, with only a few cases reported in the medical literature[8]. A previous study reported based on molecular analysis that most atypical leiomyoma including STUMP and leiomyosarcoma had a similar origin and may represent different stages of tumorigenesis[9]. Leiomyosarcoma is considered to arise de novo or it may develop from preexisting atypical leiomyoma, while the mechanism of malignant transformation has not been determined conclusively. Zhang et al[9] demonstrated that p53 mutation and PTEN deletions were significantly higher in leiomyosarcoma, atypical leiomyoma and STUMP compared with other uterine SMTs.

Laparoscopic hepatic surgery produces relatively less peritoneal trauma and blood loss than conventional laparotomy and may result in decreased perioperative complications[23,24]. Therefore, it has recently been considered a better operative approach and has increasingly been performed worldwide. Moreover, ultrasound-guided laparoscopic liver resection with vessel-sealing devices using the crush clamping method and Pringle maneuver is a minimally invasive, safe and effective procedure for patients with primary and metastatic hepatic tumor[24-26]. A recent study reported that laparoscopic intraoperative ultrasound examination had a higher detection rate regarding liver metastases, when compared to CE-CT and MRI[26]. Therefore, it enables a more accurate R0 resection. The Pringle maneuver is the simplest method of vascular occlusion by clamping of the hepatoduodenal ligament to occlude total inflow to the liver. This method ensures safety and prevent major accidental blood loss during laparoscopic liver resection[25]. The crush clamping method for hepatic parenchymal transection is well-known. Moreover, a combination technique with vessel-sealing devices in laparoscopic liver resection have been applied. This technique shows lower blood loss, shorter transection time, and reduces rates of post-hepatectomy complications[24]. We also performed laparoscopic partial resection with these procedures safely in both primary and secondary resections. However, excessive intraoperative blood loss can occur during laparoscopic liver resection because active bleeding is difficult to control, as the conversion to laparotomy takes time[25]. In addition, laparoscopic partial resections of segment 7 and segment 8 on the dorsal liver head side are considered relatively difficult because of the anatomical features[27]. Therefore, it is necessary to carefully identify the surgical indications for laparoscopic liver resection.

Preoperative imaging tests and past medical history strongly suggested that the lesion was an atypical malignant tumor.

We diagnosed the condition as metastatic hepatic leiomyosarcoma.

We share this case to provide important knowledge regarding the appropriate treatment method for metastatic hepatic leiomyosarcoma.