We report the first case of a healthy 23-year-old female who underwent an interventional radiology-guided embolization of a hepatic adenoma, which resulted in a gas forming hepatic liver abscess and septicemia by Clostridium paraputrificum. A retrospective review of Clostridial liver abscesses was performed using a PubMed literature search, and we found 57 clostridial hepatic abscess cases. The two most commonly reported clostridial species are C. perfringens and C. septicum (64.9% and 17.5% respectively). C. perfringens cases carried a mortality of 67.6% with median survival of 11 h, and 70.2% of the C. perfringens cases experienced hemolysis. All C. septicum cases were found to have underlying liver malignancy at the time of the presentation with a mortality of only 30%. The remaining cases were caused by various Clostridium species, and this cohort’s clinical course was significantly milder when compared to the above C. perfringens and C. septicum cohorts.

Core tip: To our best knowledge, this is the first case where a liver abscess grew C. paraputrificum. Although pyogenic liver abscesses caused by Clostridium species are extremely rare, early and accurate diagnosis of clostridial hepatic abscess and timely interventions are paramount, as it carries an extremely high morbidity and mortality. However, depending on the exact causative Clostridium species, the clinical course can vary unexpectedly.

Pyogenic liver abscesses caused by Clostridium species are extremely rare[1], and only 57 cases have been reported in the English medical literature (Table 1). C. perfringens was responsible for more than a half of these reported cases. This species carries an extremely high mortality rate, especially when associated with hemolysis[2-4]. The previously reported 20 C. perfringens cases showed a median age of 65 years at the time of presentation[5]. Advanced age, underlying malignancy, liver cirrhosis, and immunocompromised conditions including dialysis, transplant and diabetes mellitus were identified as risk factors[2,5-8]. Here we present a very unusual case of a healthy 23-year-old female who underwent interventional radiology (IR) embolization for a hepatic adenoma and presented within 24 h with a gas forming hepatic liver abscess and septicemia. Due to the extremely rapid clinical presentation where the embolized tumor was completely replaced by a gas forming abscess within a day, C. perfringens was suspected as the causative organism. Unlike many other fatal C. perfringens hepatic abscess cases, our patient did not have any signs of hemolysis nor experienced any end-organ failure. Future speciation work-up revealed C. paraputrificum. There have been five case reports of septicemia caused by C. paraputrificum[9-13]. However, this is the first case of a gas forming hepatic abscess.

A 23-year-old healthy female with obesity (body mass index of 37 kg/m2) and Polycystic Ovarian Syndrome on oral contraceptive pills was evaluated for intermittent, right upper quadrant abdominal pain. She was found to have a hepatic adenoma measuring 5.2 cm × 3.3 cm × 6.6 cm abutting the liver capsule in segment 7 (Figure 1) on imaging. The patient’s oral contraceptive pill was discontinued for the more than three months, since the adenoma was diagnosed. A repeat computerized tomography (CT) scan did not show regression of the mass (Figure 2). Due to ongoing intractable abdominal right upper quadrant pain and risk of potential rupture, a surgical resection was presented as an option vs IR-guided embolization as an alternative option given her body habitus and fatty liver on magnetic resonance imaging study. The patient elected to proceed with IR embolization. 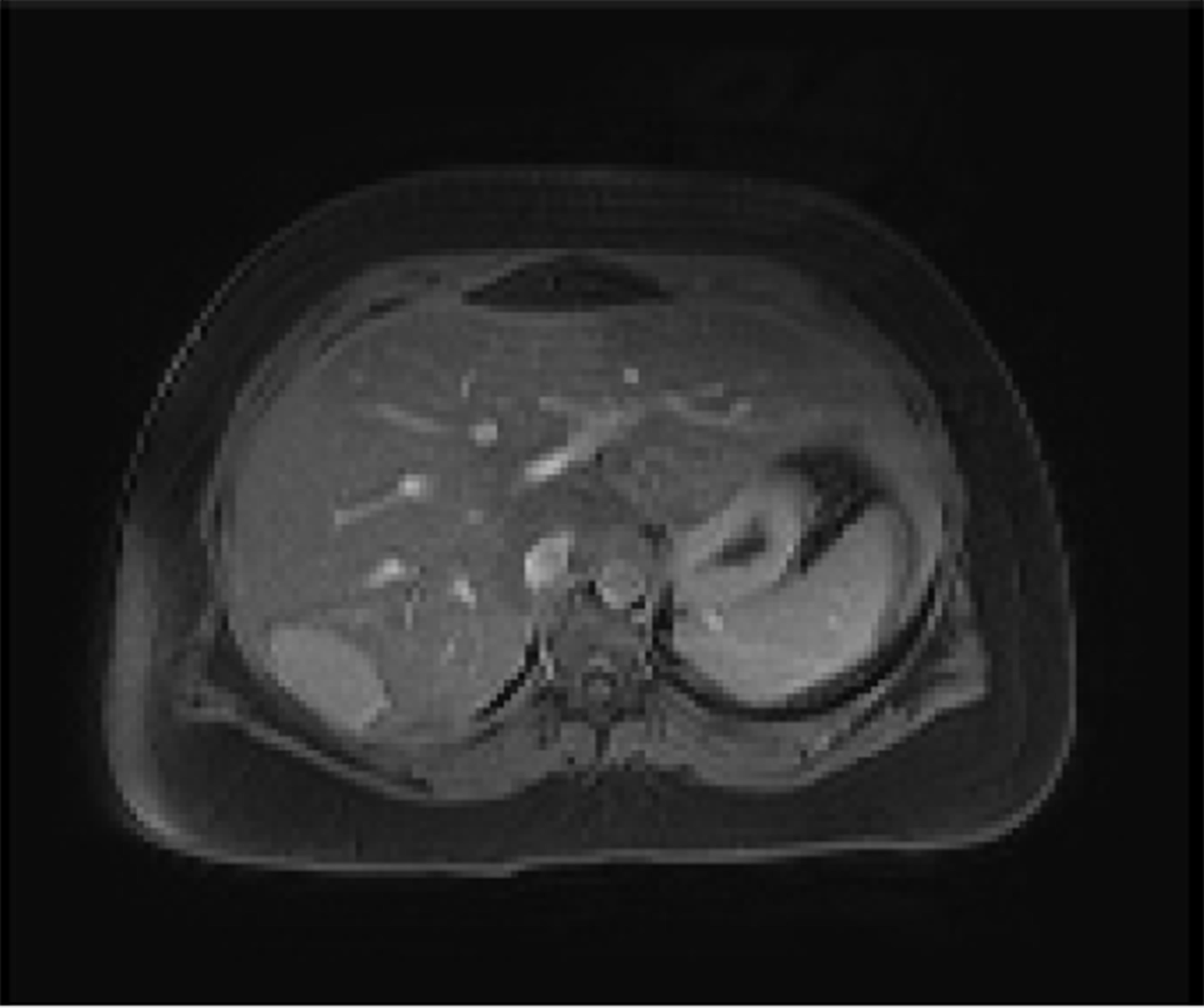 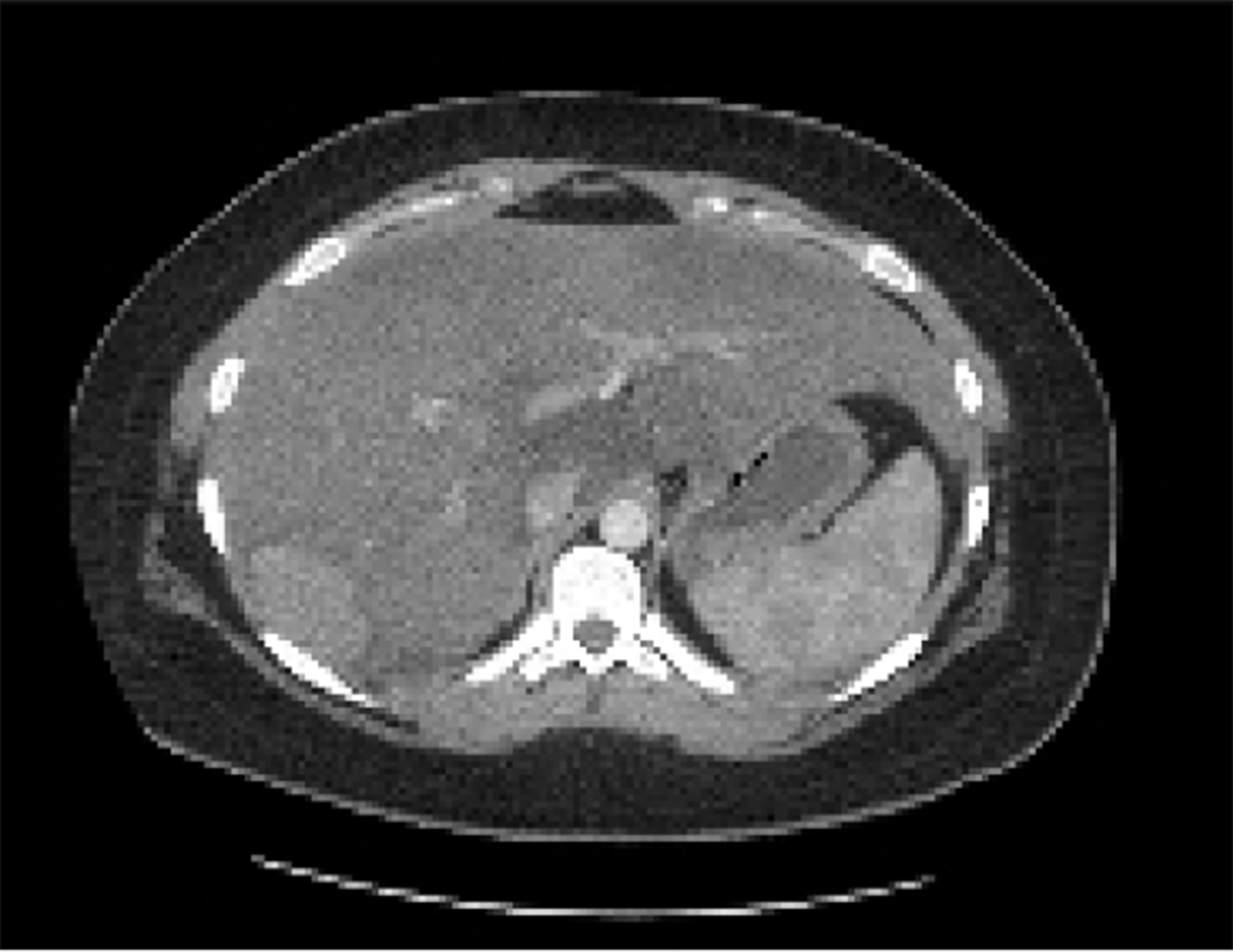 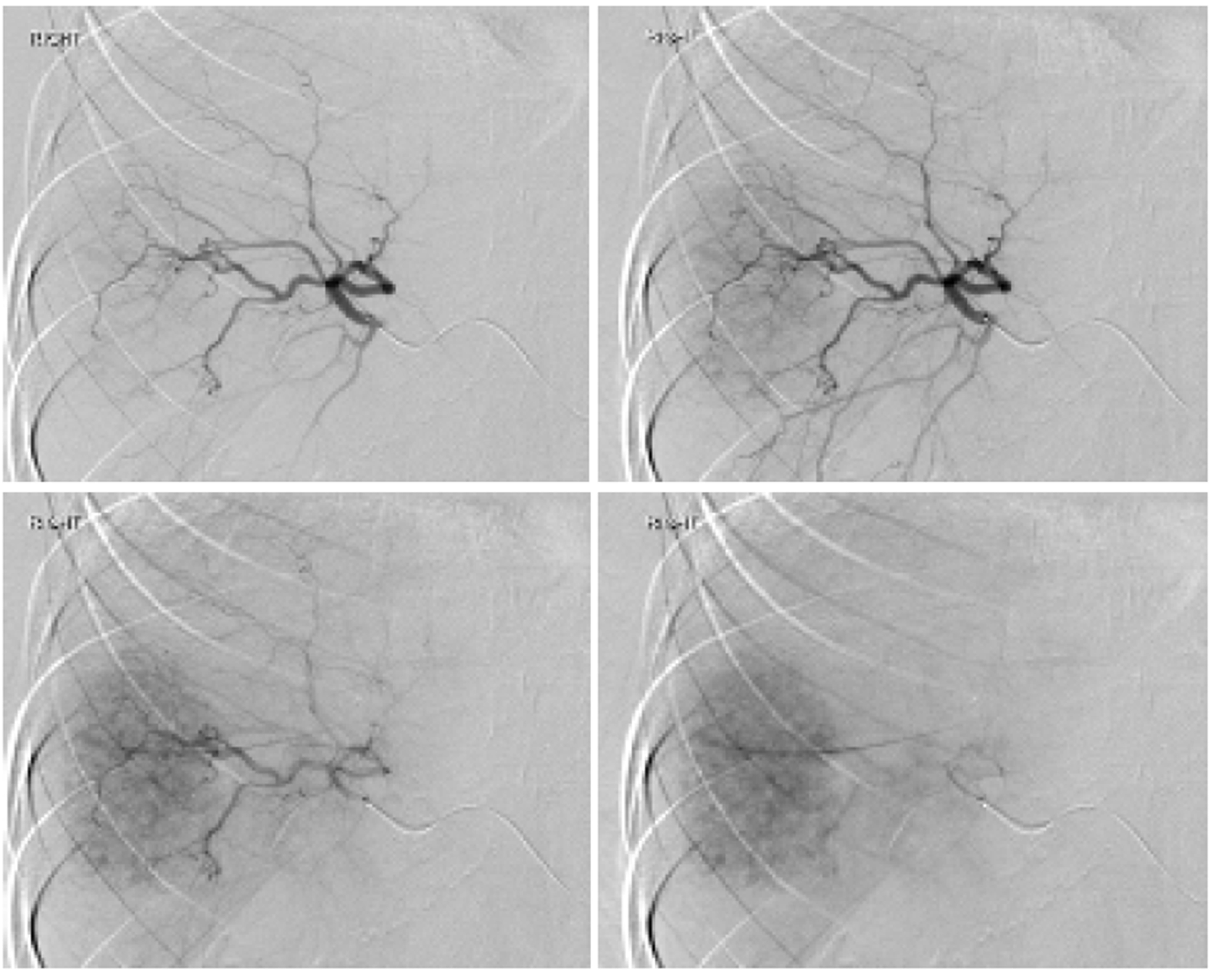 The next day, the patient began to experience a rapid onset of right upper abdominal pain, nausea, vomiting and fever of 101.5 °F. In the emergency room, the patient was tachycardic with a heart rate in the 120 s. She experienced right upper abdominal tenderness on physical exam. Blood tests showed a white blood cell (WBC) count of 16.4 Thou/μL, a lactic acid of 2.4 nmol/L, a serum aspartate transaminase (AST) of 671 U/L, a serum alanine transaminase (ALT) of 310 U/L, and a total bilirubin (T. bili) of 1.4 mg/dL. A CT scan showed the embolized tumor in segment 7 completely replaced with multiple gas pockets (Figure 4). A set of blood cultures was sent, and the patient was started on vancomycin, levofloxacin and metronidazole (patient has a penicillin allergy). The next day, the set of blood cultures grew gram positive rods. The patient’s serum WBC was elevated to 25 Thou/μL. Later that day, the preliminary blood culture revealed clostridium species. With ongoing fever and the newly diagnosed clostridium species infection, a repeat CT scan was performed to rule out potential life threatening gas gangrene. The repeat CT scan showed no changes. 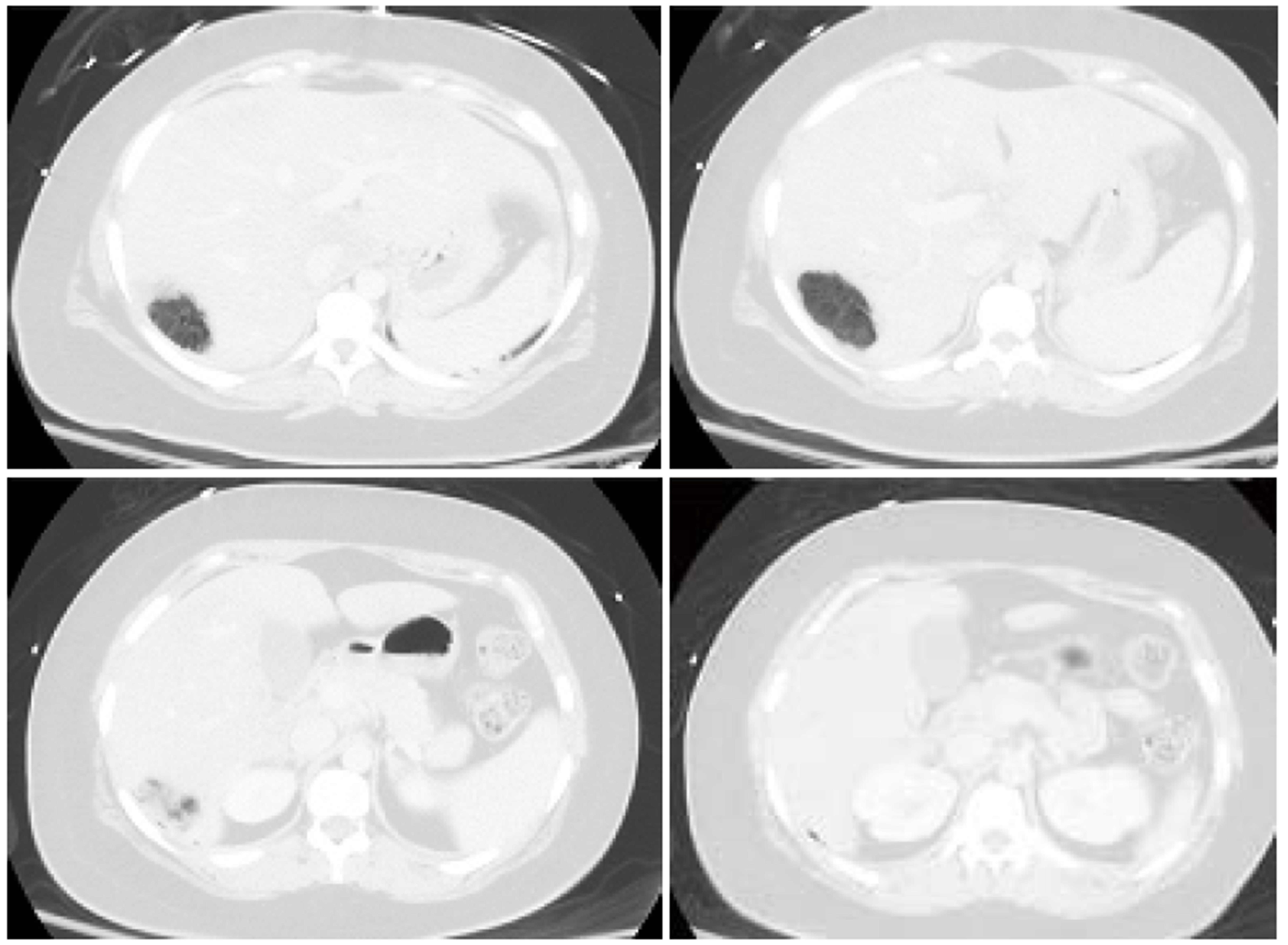 The patient remained persistently febrile, despite antibiotic therapy and subsequent blood cultures showing no growth. The culture speciation showed Clostridium paraputrificum and no other organisms were isolated. Despite improving leukocytosis, an IR-guided drain was placed on hospital day 10 due to the persistent fevers. One hundred and twenty cc of dark turbid sterile fluid was aspirated, and the gram stain showed many neutrophils. No bacteria were isolated. Aspirin was started because the patient’s platelet count rose above 500 Thou/μL. Over the next a few days since the drain placement, the fluid character became less turbid. However, the color became frankly bilious. The daily drain output persistently remained less than 200 cc, indicating a low output bile leak. Thus an ERCP was not performed. On Hospital day 16, the patient was afebrile for the first time. The patient was discharged home on hospital day 17 since the patient was afebrile for 48 hours. At the time of discharge, the drain output was less than 100 cc per day and the patient was discharged on oral metronidazole only.

The patient presented two weeks after discharge with a follow-up CT, which revealed a significantly reduced gas filled abscess cavity (Figure 5). The IR drain was taken out as the daily output remained minimum, less than 5 cc per day. Oral metronidazole was continued for two more weeks post drain removal. Upon completion of the antibiotic course, blood tests showed a WBC of 9.5 Thou/μL, a platelet count of 379 Thou/μL, an AST of 27 U/L, an ALT of 30 U/L, and a T. bili of 0.6 mg/dL. 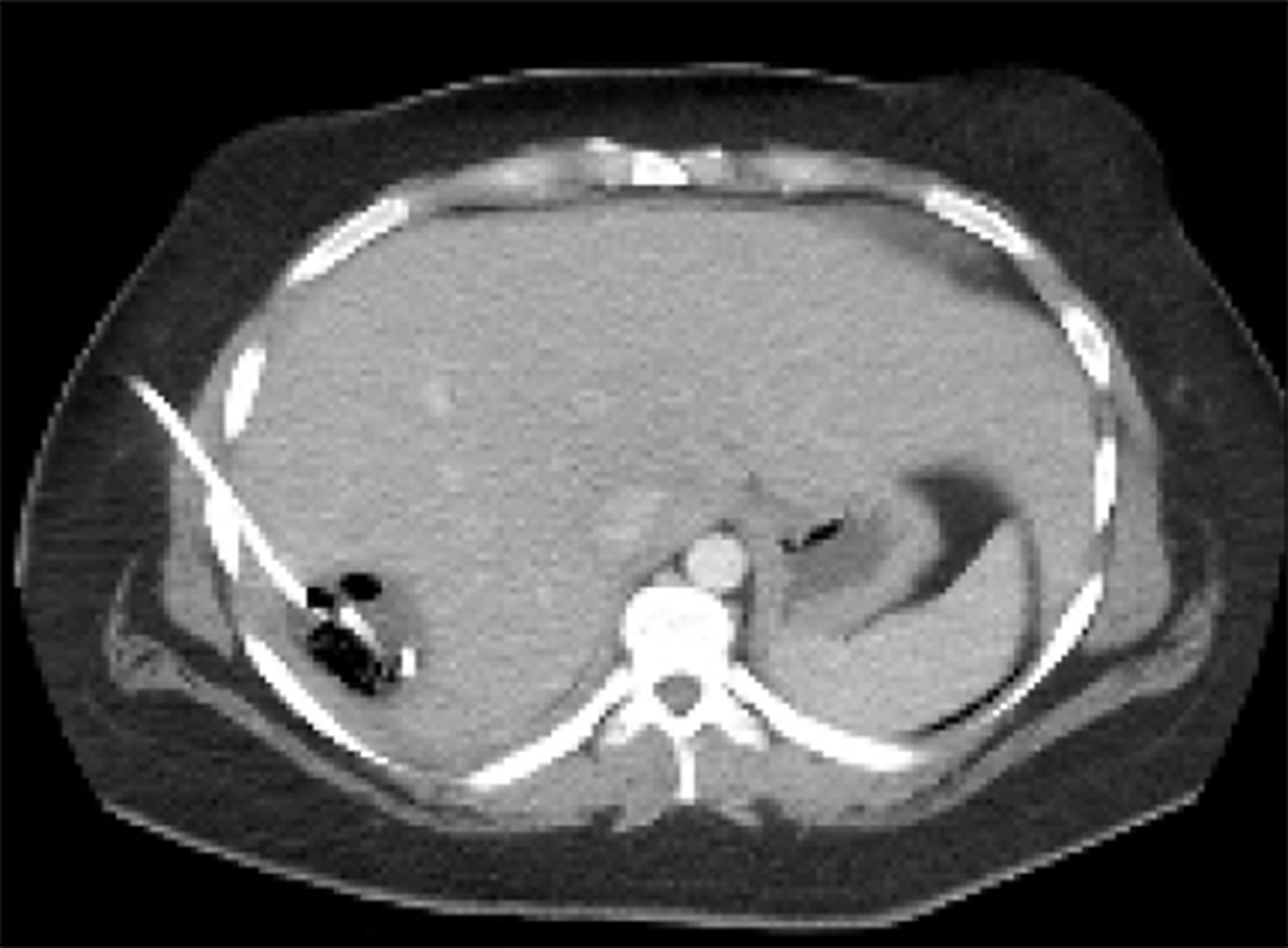 The single strongest risk factor for GFPLA appears to be the presence of diabetes and poorly controlled blood glucose[15,18,22]. According to a case report series done in Taiwan which compared 83 patients with GFPLA against 341 NGFPLA patients, 85.5% of those with GFPLA had diabetes mellitus with an initial glucose level of 383.0 ± 167.7 (mg/dL) vs 33.1% with an initial glucose level of 262.6 ± 158.0 (mg/dL)[22]. Similar findings were reported from another single center series from South Korea, where 76% (19 out of 25) were found to have diabetes when comparing 25 patients with GFPLA against 354 NGFPLA patients[18]. The most common causative organism for GFPLA was Klebsiella pneumoniae contributing 77% to 88%[18,22,25]. Escherichia, Streptococcus, Enterococcus, Pseudomonas, Morganella, Enterobacter, Serratia, Bacteroides and Clostridium species were responsible for the remaining[22].

An extremely small portion of GFPLA is caused by clostridial species. The two most commonly reported clostridium species are C. perfringens and C. septicum. We performed a PubMed literature search and identified 57 clostridium hepatic abscess cases reported in the English medical literature (Table 1). Our search showed that C. perfringens was responsible for 37 cases (64.9%) and C. septicum was responsible for 10 cases (17.5%). Nine cases were caused by C. difficile, C. ramosum, C. sporogenes, C. baratii, C. bifermentans, C. clostridioforme, C. hathewayi, and C. novyi type B. In one case, the exact speciation was not provided due to the institution’s microbiology limitation for identifying rare clostridial species.

C. perfringens septicemia has been reported to carry a mortality rate ranging from 70%-100%[4]. Massive intravascular hemolysis is a well-known complication, occurring in 7%-15% of C. perfringens bacteremia cases[26-28]. C. perfringens’s alpha-toxin has been shown be the key virulent factor for this clinical course, by inducing gas gangrene and causing massive hemolysis by destroying red cell membrane integrity[3]. In our 37 cases of C. perfringens hepatic abscess, the mortality rate was 67.6% (25/37). 70.2% (26/37) experienced hemolysis (Table 1). Among the 25 patients who died, one patient died prior to arriving to the hospital. The mean time of survival for these 24 patients was 11 h. Among the 25 patients who died, only 4 patients (16%) were found to have poly-microbial infection, whereas among those who survived, 6 patients (50%) were found to have poly-microbial infection. The most common underlying disease was diabetes (11/37) followed by underlying malignancy (10/37). Interestingly, 7 patients were found to have no clear underlying medical disease.

Among the 10 cases of C. septicum species (Table 1), the patient survival was greater, 70% (7/10). Furthermore, no hemolysis was reported in contrast to the C. perfringens cases. Of note, C. septicum also produces alpha toxin, but it was shown to be unrelated to the alpha toxin of C. perfringens[29]. C. septicum infection has been well known to be associated with underlying occult malignancy[30-33]. It has been hypothesized that a rapidly growing tumor with anaerobic glycolysis provides a relatively hypoxic and acidic environment for germination of the clostridial spores[34]. In fact, all of the ten patients had infected liver tumors at the time of the presentation, and only one patient (10%) was found to have a poly-microbial infection.

The remaining 10 cases where the infection was caused by various clostridial species, including the one with no provided speciation, appeared to have a milder clinical course when compared to the above C. perfringens and C. septicum cohorts (Table 1). The mortality rate was lower, only 20%, and median age at the time of presentation was significantly younger, 27 years. Interestingly, trauma was the underlying disease for the three cases.

Here, we report a young, healthy 23-year-old female who was diagnosed with a hepatic abscess caused by Clostridium paraputrificum. Due to the extremely rapid clinical presentation and from the initial imaging study where the mass was completely replaced with multiple gas pockets, a C. perfringens infection was highly suspected. Unlike many typical C. perfringens hepatic abscess cases, our patient did not experience hemolysis nor had any end organ failure requiring ICU care. In addition, our patient did not have the typical risk factors for C. perfringens nor C. septicum infections, except for having a tumor in the liver. At the end, the causative organism was identified as Clostridium paraputrificum, which has not been reported before in the literature. A Clostridium hepatic abscess is an extremely rare case and C. perfringens is the most common causative organism. Early accurate diagnosis and timely interventions are paramount, as it carries an extremely high mortality. However, depending on the exact causative clostridial species, the clinical course can vary significantly.

The patient’s source of sepsis was unequivocally identified once an imaging study showed a gas forming liver abscess.

Klebsiella pneumonia was suspected to be the causative organism initially as it is known to contributing 77% to 88% of all gas forming pyogenic liver abscesses.

A gas forming liver abscess can be diagnosed with an abdominal X-ray or ultrasound, but typically a computed tomography scan is commonly used for the diagnosis.

A needle aspiration of the hepatic abscess and/or blood culture often will yield the causative organism.

An early recognition and treatment with antibiotics is paramount as Clostridium hepatic abscess infections are often extremely aggressive and lethal.

There have been five case reports of septicemia caused by C. paraputrificum, however, none of them caused hepatic abscess.

A Clostridium hepatic abscess requires early accurate diagnosis and timely interventions, as it carries an extremely high mortality. However, depending on the exact causative clostridial species, the clinical course can vary significantly.