We successfully generated a useful model for predicting NASH in Japanese morbidly obese patients based on their biochemical profile using a rule extraction algorithm.

Non-alcoholic fatty liver disease (NAFLD) includes non-alcoholic steatohepatitis (NASH) and non-alcoholic fatty liver (NAFL); a pathological diagnosis is the gold standard for the diagnosis of NASH[1,2]. The prevalence of NAFLD is reported to be 29.7% and is increasing in Japan[3]. The number of patients with morbid obesity is also increasing worldwide, and this increase is a major social problem[4]. Although the prevalence of morbid obesity is low in Japan (0.25%-0.3%) compared with to the United States[5,6], it is also increasing in Japan.

Morbid obesity is frequently complicated by metabolic diseases such as type 2 diabetes mellitus, hypertension, hyperlipidemia, and ischemic heart disease. The prevalence of NASH in patients with morbid obesity is also high. We previously reported that the prevalence of NASH in Japanese morbidly obese patients was extremely high (77.5%)[7]. Among non-morbidly-obese patients, the survival rate of NASH patients is significantly lower than in the general population[8]. As a result, an early diagnosis and early intervention are important for NASH patients[7].

A percutaneous liver biopsy is usually performed to diagnose liver diseases, including NASH[9]. Since a percutaneous liver biopsy requires the insertion of a long needle through the subcutaneous tissues to reach the liver, this method is difficult to perform in obese patients with a thick layer of subcutaneous fat. In addition, a percutaneous liver biopsy carries a risk of complications and sampling error in patients with a thick layer of subcutaneous fat. Elastography is non-invasive and sometimes used to estimate the liver stiffness or the extent of fibrosis in patients with liver disease, including NASH[9]. Since elastography is also performed percutaneously, a thick layer of subcutaneous fat is again an obstacle for the accurate measurement and sometimes leads to a misdiagnosis. Magnetic resonance (MR) elastography is useful for predicting fibrosis and NASH[10]. However, it is also difficult to perform in morbidly obese patients due to limitations in the size or the ability of MR equipment to accommodate the patient. Given the above limitations, a safer, non-invasive, convenient diagnostic method for predicting NASH in morbidly obese patients is needed.

Predictive calculation formulas, such as the NAFIC score, fibrosis-4 index, and NAFLD fibrosis score are usually used to diagnose fibrosis and NASH[11-16]. These formulas are usually constructed using the data from patients whose body weight is within the general range and are not specialized for patients with morbid obesity. The HAIR [hypertension, alanine aminotransferase (ALT), insulin resistance] score[16] and BARD score[17] [includes body mass index (BMI), aspartate aminotransferase (AST)/ALT ratio and presence of diabetes mellitus] were constructed using data of morbidly obese patients from Australia[16] and the United States[17], respectively. However, there are racial differences between Asian people (including Japanese) and Caucasians[7,18,19]. When the BMI is similar, the degree of liver dysfunction and prevalence of NASH is worse in Asian patients than in Caucasians[7,18,19].

Recently, there has been remarkable progress in artificial intelligence, and we are now able to generate highly accurate and interpretable predictive models[20,21]. Rule extraction is a technique that attempts to find a compromise between requirements by building a simple rule set that mimics how well-performing complex predictive models (black-box, i.e., not understandable) make their decisions for physicians and clinicians. We proposed continuous recursive-rule extraction (Re-RX) with J48graft as a promising algorithm for rule extraction[22]; this was based on the Re-RX algorithm[23] to simultaneously enhance the accuracy and interpretability of the extracted classification rules.

To create the prediction algorithm, we used the data of the cohort of Japanese morbidly obese patients who participated in our previous study[7]. The patient characteristics are shown in Supplemental Table 1 and Table 2 (modified from reference 7). One hundred and two patients, including 79 NASH and 23 non-NASH patients were analyzed using rule extraction technology. The main purpose of this study was to generate a highly accurate and interpretable predictive model for NASH in Japanese morbidly obese patients using an accuracy-priority rule extraction algorithm.

To validate the algorithm, another cohort of 77 patients was collected from October 2012 to September 2014. This cohort included 65 NASH and 12 non-NASH patients. Consecutive obese patients undergoing bariatric surgery for the management of morbid obesity at a single center (Weight Loss and Metabolic Surgery Center, Yotsuya Medical Cube, Tokyo, Japan) underwent a liver biopsy during the operation[7]. The precise methods for liver biopsies and sampling have been described in previous study[7]. NASH was histologically defined as steatosis with at least two of the following[24]: (1) Lobular necro-inflammatory foci; (2) Ballooning degeneration of hepatocytes with or without Mallory bodies; and (3) Perisinusoidal fibrosis. The indications for bariatric surgery followed the criteria established in 2005 by the Asia–Pacific Bariatric Surgery Group consensus meeting[18] as follows: Asian patients with a BMI of > 37 kg/m2 or > 32 kg/m2 (with diabetes or 2 other obesity-related comorbidities) and failure to show any improvement with nonsurgical treatment.

The standard clinical, anthropometric (weight, height, waist and hip circumferences) and biochemical measurements, including AST, ALT, γ-glutamyl transpeptidase (γ-GTP), cholinesterase (ChE), uric acid (UA), albumin (Alb), C-reactive protein (CRP), Fe (iron), fasting blood insulin, fasting plasma glucose (FPG), hemoglobin (Hb) A1c, triglyceride, and low density lipoprotein-cholesterol (LDL-cho) levels, were obtained before bariatric surgery. All blood samples were collected after overnight fasting. The homeostasis model assessment insulin resistance (HOMA-IR) index was used as an index of insulin resistance and was calculated by the following formula: glucose (mg/dL) × insulin (µU/mL) /405. Computed tomography was performed, and the areas of subcutaneous and visceral fat were calculated. The diagnosis of type 2 diabetes mellitus was based on the Japanese Diabetes Society criteria[25]. Hypertension was diagnosed if the patient had a history of hypertension and was on antihypertensive medication or if the patient had a resting recumbent blood pressure of ≥ 140/90 mmHg on two repeated occasions.

Written informed consent was obtained from every patient, and the study was approved by the institutional review boards (IRB) of Yotsuya Medical Cube (YMC-2009-3). The study was performed in accordance with the principles of the Declaration of Helsinki. For this study using artificial intelligence using rule extraction technology, new IRB statements (Gunma University-2017-004) and opt-out were obtained.

All data are shown as the mean ± SD. Differences between the groups were analyzed by Fisher’s exact probability test and Mann-Whitney U tests when a significant difference was obtained by the Kruskal-Wallis test. A value of P < 0.05 was considered to be significant. 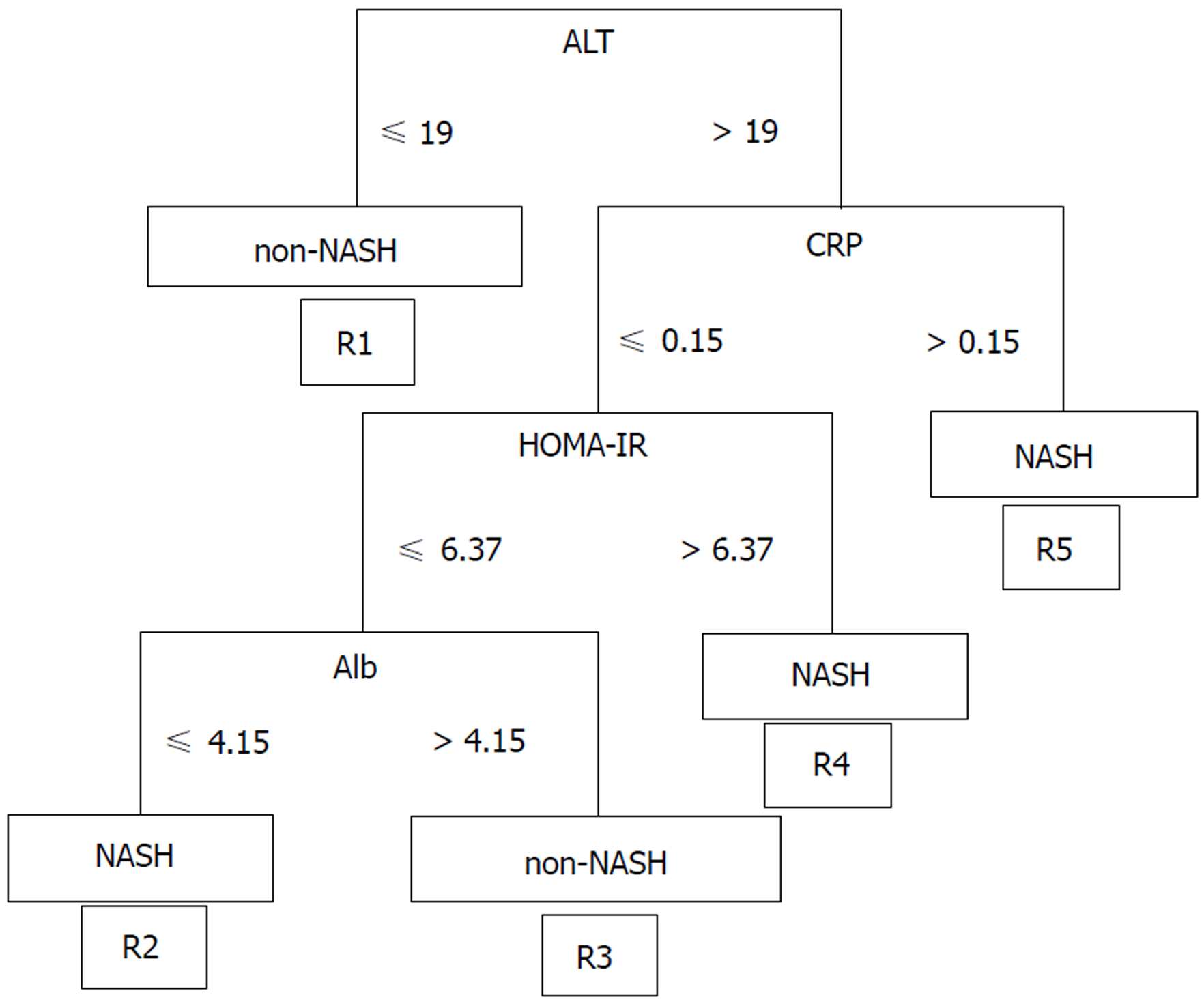 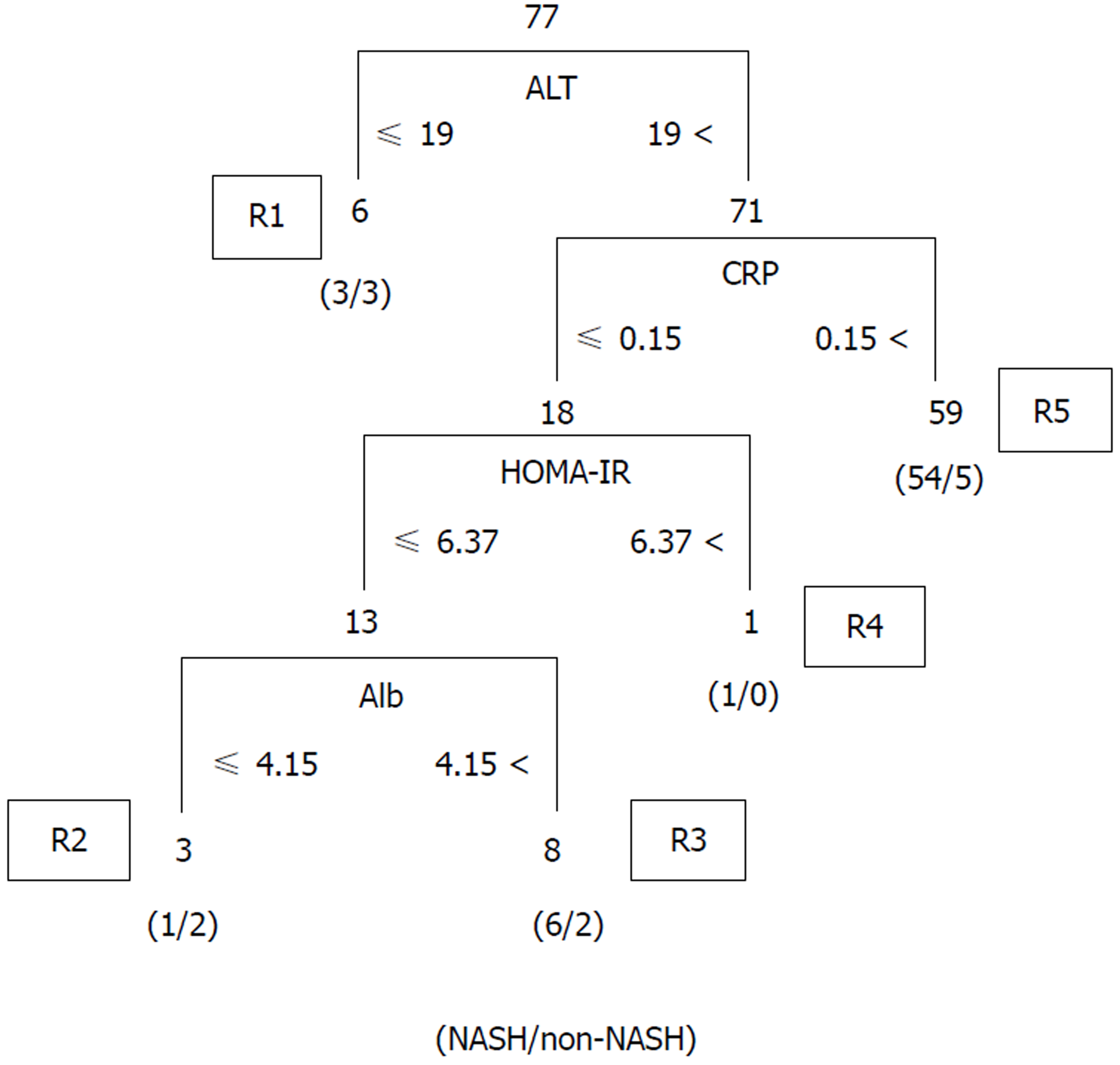 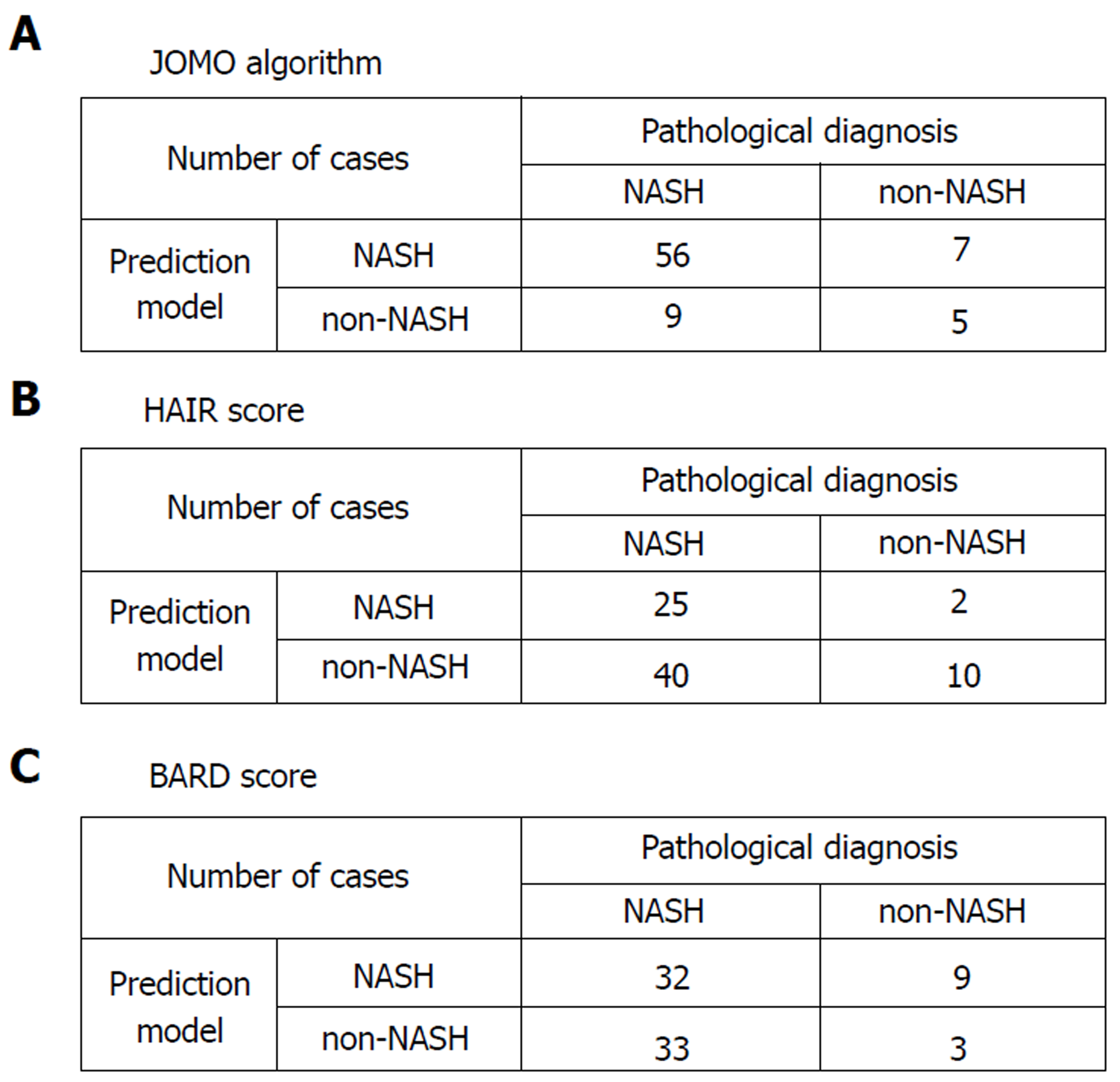 The Receiver Operating Characteristic (ROC) curve of our algorithm for all patients is shown in Figure 4. The area of ROC was 0.772. 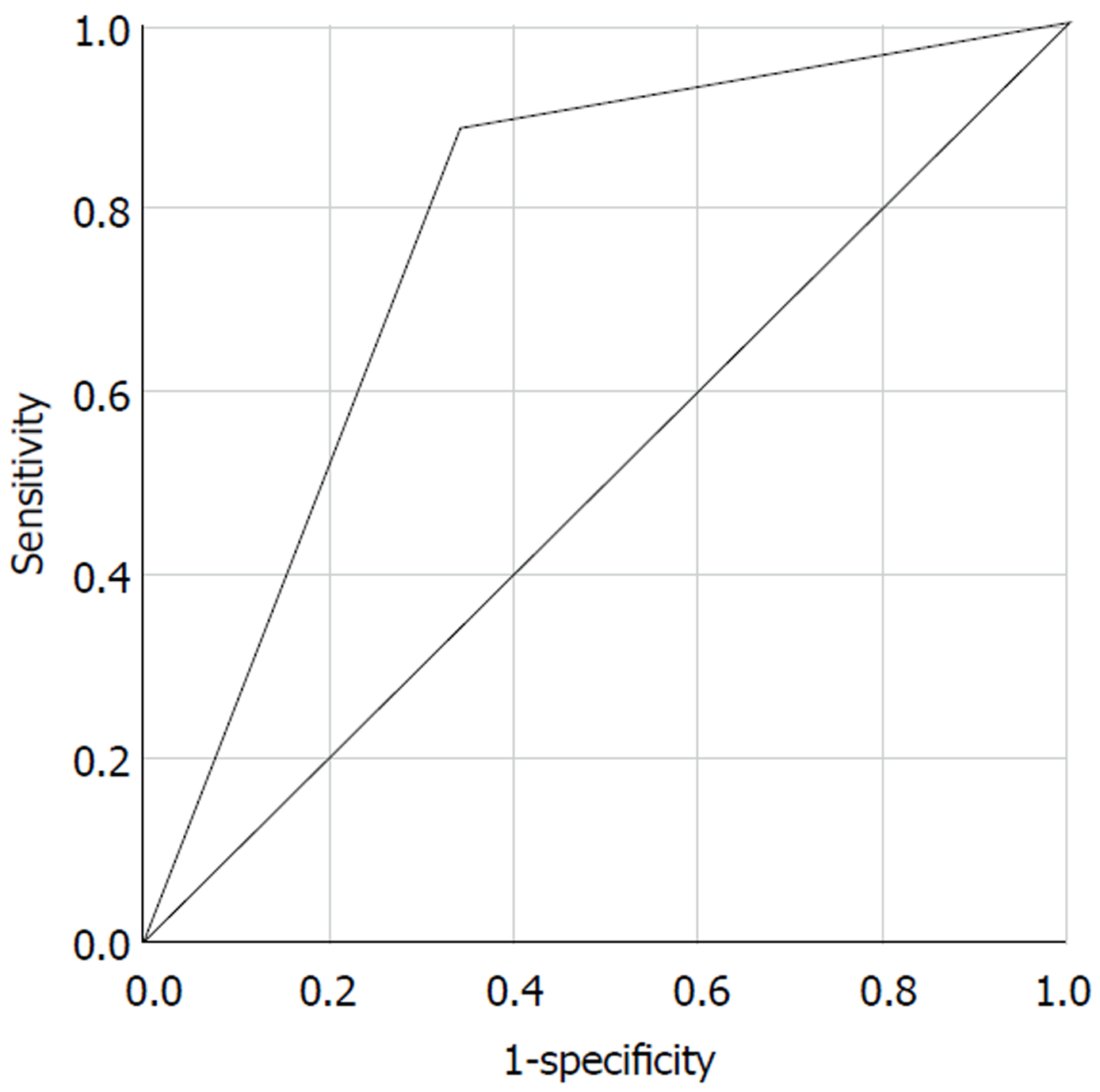 In this study, we performed k-fold cross-validation when crafting this algorithm[30,31]. Regarding the experimental settings and data splitting technique, k-fold CV[30] was applied, i.e., the original database was partitioned into k-subsets/folds of equal sizes where each subset had to be trained and tested. Accordingly, the final output was predicted by taking the averages of all partitions/folds that had been tested. Therefore, we applied 10 runs of 5-fold CV which was averaged to obtain the robust classification accuracy. Although the application of rule extraction technology is new in the medical field, strategies using Continuous Re-RX with J48graft, i.e., rule-based classifiers, have already been established in the field of artificial intelligence[23,27]. Our algorithm using Continuous Re-RX with J48graft can therefore be adapted to different cohorts without a loss of generality.

CRP was selected as a predictive parameter in this JOMO algorithm. The predictive value of CRP in the diagnosis of NASH remains controversial at present. Anty et al[32] reported the CRP levels were not predictive of the diagnosis of NASH in severely obese patients because the liver as well as the adipose tissue can produce CRP. However, Yoneda et al[33] demonstrated that high-sensitivity CRP was useful for making a prediction in cases of NASH compared with in cases of simple nonprogressive steatosis. They also suggested that high-sensitivity CRP might be a clinical feature that indicates the severity of hepatic fibrosis in cases of NASH[33]. It is of note that there was no statistically significant difference in the CRP levels between the NASH and non-NASH as groups in our cohort (Supplemental Table 2), and thus the introduction of CRP into the predictive model demonstrated the power and usefulness of artificial intelligence.

The level of CRP can be affected by many factors. However, the cohort used in this study was relatively homogenous: All patients were candidates for bariatric surgery, and blood samples were collected from all patients who were roughly in the same condition before surgery. As such, our cohort may be protected against miscellaneous factors that influence the CRP level. The prevalence of NASH patients was high, and the number of non-NASH patients was low in the cohort used in this study. This may have influenced the accuracy of our predictive algorithm. Therefore, further evaluation of the role of CRP in this algorithm will be needed before it should be applied to other cohorts. It the future, we plan to improve this algorithm further using a larger number of NASH and non-NASH patients.

In this study, we generated a new predictive model that used Continuous Re-RX with J48graft to predict NASH in Japanese morbidly obese patients. This algorithm enables the prediction of NASH using parameters available from blood tests in routine medical examinations. Although further studies with larger numbers of patients are needed to confirm the results, this algorithm may be useful for non-invasively predicting NASH in morbidly obese Japanese patients in the clinical setting.

Pathological diagnosis is the gold standard for the diagnosis of non-alcoholic steatohepatitis (NASH). However, it is difficult to perform a percutaneous liver biopsy in routine medical care, especially in morbidly obese patients. Predictive calculation formulas are usually used to diagnose fibrosis and NASH.

We successfully generated a useful model for predicting NASH in Japanese morbidly obese patients based on their biochemical profile using a rule extraction algorithm.

Although further studies with larger numbers of patients are needed to confirm the results, this algorithm may be useful for non-invasively predicting NASH in morbidly obese Japanese patients in the clinical setting.