Core tip: Pluripotent stem cells, which are capable of differentiating in various species of cells, are hoped to be donor cells in transplantation in regenerative medicine. Somatic stem cells with the ability to differentiate in various species of cells have been used as donor cells for neuronal diseases, such as spinal cord injury, cerebral infarction, amyotrophic lateral sclerosis, Parkinson’s disease and multiple sclerosis. Here, the recent progress of regenerative therapies using various somatic stem cells is described. 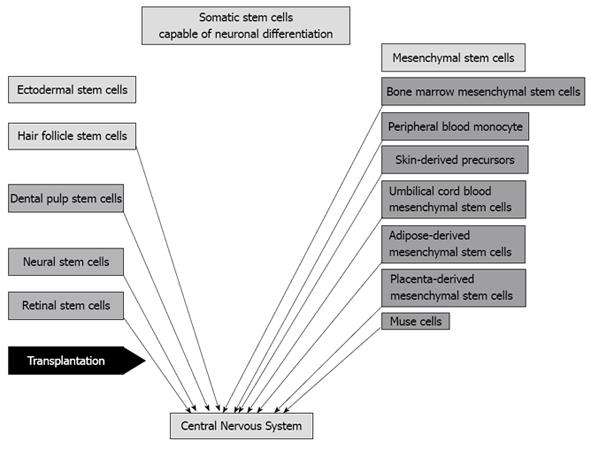 It is difficult to obtain human neural stem/progenitor cells but they are easily obtained from human fetal brains without ethical problems. The use of these human cells is accompanied with a great ethical problem[37,38]. Previously, tissues of striatum and substantia nigra richly containing dopaminergic neurons were obtained from human fetal brain and were implanted into the striatum of Parkinson’s disease patients. As a result, symptoms of a part of Parkinson’s patients dramatically improved[39,40]. However, these clinical trials were stopped due to the difficulty of obtaining fetal brain tissue and a great ethical problem in using an abortion fetus. Neural stem cells reside in the subventricular zone and hippocampus. It is more difficult to obtain autologous cells from the brain. Therefore, transplantation of autologous neural stem cells has not been tried for neuronal regeneration. In addition, few clinical applications of allogenic transplantation of human neural stem cells have been performed[41,42]. 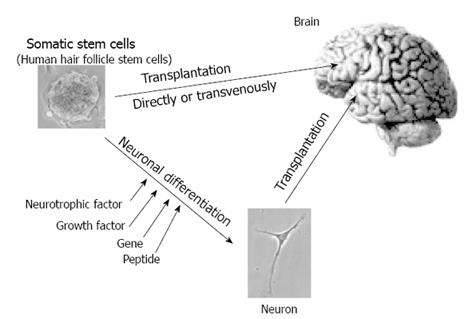 Recently, retinal progenitor/stem cells (RSCs) have been identified in not only embryonic and newborn retina but also in adult ciliary epithelium (CE) of rodents and humans[50-54]. Their niche has been suggested to be in the pigmented or nonpigmented epithelial layer of the ciliary margin at the peripheral edge of the retina. Since the majority of the differentiated cells were photoreceptor cells[54], transplantation of RSCs has shown their potential as tools for cell replacement in retinal degenerative diseases.

Bone marrow mesenchymal stem cells are also called bone marrow stromal cells and have been reported to be able to differentiate cells of bone, cartilage, adipose tissue, liver and neural tissue[55]. Transplantation of the bone marrow mesenchymal cells has been applied for cerebral infarction[56,57]. These cells are transplanted via intravenous transfusion and a part of them have been demonstrated to penetrate the blood brain barrier (BBB), but these penetrated cells scarcely survive and function as neurons in the brain[56,58]. Even if these cells do not differentiate to neural cells in the brain, these cells secrete neurotrophic factors which may have effects on neural tissue repair[58]. When the bone marrow stromal cells are transferred with the gene of Notch intracellular domain and neurotrophic factors were added, these cells mostly differentiated to neurons[55]. Clinical application with transplantation of bone marrow mesenchymal stem cells to neuronal degenerative disease patients of Alzheimer disease[57], Parkinson’s disease[20,59,60], amyotrophic lateral sclerosis[61-71] and multiple sclerosis[21,22] have been tried, but those effects have not been fully established. Those induced neurons are transplanted to cerebral infarction model rats into the brain and the major part of the transplanted cells differentiated to neurons and the symptoms of the model rats improved[72]. VHL peptide-transferred bone marrow stromal cells partially differentiate to neurons and transplantation of those induced neurons improved the behavior of the spinal cord injury rats[28]. Human autologous bone marrow-derived mesenchymal stem cells have been transfused to brain ischemic disease patients[73,74]. The results of the clinical trials appear to be feasible and safe and occasionally an improving effect is observed. Several human clinical applications for spinal cord injury with transplantation of bone marrow mesenchymal stem cells have been reported[23-25,72-78] (Table 1). Among them, improvement of motor function and electrophysiological findings have been recognized[25].

Skin-derived precursors (SKPs), which are also called dermal papilla stem cells, are reported to differentiate into various types of cells, including neuronal cells[79-81]. Although these cells are considered to originate from mesenchymal tissue in dermis, they differentiate to not only mesenchymal-derived cells, such as smooth muscle cells and adipose cells, but also epithelial lineage cells, such as neurons, glia and keratinocytes. In addition, nestin-expressing hair follicle stem cells residing at the hair follicle bulge region in mice and at the outer root sheath of hair follicle beneath sebaceous glands in humans are reported to differentiate to epithelial lineage cells, including neuronal cells[82,83], and they are also called neural crest stem cells [84]. These cells might contribute to neuronal regenerative therapy, repairing not only peripheral nerves but also the central nervous system, including brain and spinal cord[85,86] (Figure 2). It is reported that VHL peptide-transferred rodent SKPs were transplanted into cerebrum in Parkinson’s disease rat models and they differentiated to dopaminergic neurons in the cerebrum with improvement of their symptoms[29,30]. This report suggested that SKPs are hopeful sources of donor cells to transplant into the nervous system for neuronal regenerative therapy.

Peripheral blood monocytes include mesenchymal stem cells that are multipotential and capable of differentiating to neuronal lineage cells. These cells have the advantage of being obtained from an easily accessible minimally invasive procedure. With treatments of macrophage colony-stimulating growth factor and thereafter NGF, these cells express neuron specific enolase, neurofilament and microtubule associated protein 1-B that are neuronal markers[103]. These cells differentiate to microglia that is supportive for neuronal tissue[104] and are promising candidates as donor cells of autologous transplantation for neuronal regeneration.

Multilineage-differentiating stress enduring (MUSE) cells are pluripotent stem cells resembling ES or iPS cells[105]. These cells are derived from skin fibroblast or mesenchymal stromal cells[7,106]. Among stress (long-time heparin treatment) enduring fibroblasts, multilineage-differentiating stem cells were found. It is reported that these cells can differentiate to tri-dermal cells[7]. They are promising as donor cells for regenerative cell therapy[8]. Since they differentiated to neural lineage cells such as neuron and glia, they are hoped to be donor cells for neuronal regenerative cell therapy[107]. MUSE cells are the most promising somatic stem cells and the obtaining method is established. The autologous transplantation of MUSE cells obtained from autologous fibroblast or mesenchymal stem cells is useful for neuronal regenerative cell therapy. The necessity of cell sorting using anti-SSEA-3 antibody is a limiting factor in generating MUSE cells[7]. However, since the generative rate of MUSE cells is small but stable, use of MUSE cells is very promising as donor cells of transplantation of cell therapy for regeneration of neuronal disease.

Endoderm-derived somatic stem cells capable of neuronal differentiation are rare. When normal thyrocytes are cultured in non-serum small airway growth medium (SAGM) and their neuronal differentiation is induced, they express neuronal marker beta-III-tubulin[108]. This result suggests that thyroid cells derived from endoderm are capable of differentiating to neurons. Although direct conversion of hepatocytes derived from endoderm to neurons using defined factors has been recently reported[109], it is a report using a reprogramming method like iPS cells. Principally, it is likely that endoderm-derived stem cells are difficult to differentiate to neurons.