DNA methylation and demethylation are two vital epigenetic regulatory mechanisms for gene expression. DNA cytosine methylation is a frequently occurring process that is orchestrated by DNA methyltransferases (DNMTs), which generate 5-methylcytosine (5mC)[1]. The methylation process at the 5th cytosine can be reversible, which is called DNA demethylation. This process has received increased attention over recent years. Increasingly more researchers began to identify enzymes that could generate 5-hydroxymethylcytosine (5hmC) from 5mC in mammalian cells. For the first time, in 2009, TET1 was shown to convert 5mC into 5-hmC[2]. Thereafter, all three of the TET family proteins (TET1, TET2, and TET3) were demonstrated to catalyze a similar hydroxymethylation reaction[3]. TET family proteins are also receiving increased attention because of their function in DNA demethylation.

OSTEOGENIC DIFFERENTIATION OF MSCS IS REGULATED BY DNA METHYLATION AND DEMETHYLATION

In another study on Ad-MSCs, an age-related decline in proliferation was observed. Ad-MSCs isolated from old donors showed significantly impaired osteogenic differentiation capacity compared to young donors. Furthermore, decreased expression of Nanog, Oct4, and Lin28A and increased expression of Sox2 were observed. A simultaneous decrease of global 5hmC in Ad-MSCs from old donors also occurred. When 5-azacytidine (5-Aza), a DNMT inhibitor, was used to treat Ad-MSCs from old donors, increased global 5hmC and increased TET2 and TET3 expression were observed, which was accompanied by an increase in osteogenic differentiation capacity[14]. These results suggest that global DNA demethylation levels correlate with the osteogenesis capacity of MSCs, and that DNMT inhibitors could down-regulate DNA methylation to improve osteogenesis. Notably, an additional study by Kornicka et al[15] drew similar conclusions.

Bone marrow MSCs (BMMSCs) are a population of multipotent stem cells isolated from bone marrow that harbor the capacity for self-renewal and multi-lineage differentiation. The osteogenic differentiation of BMMSCs is also regulated by dynamic changes, as well as a balance of DNA methylation and demethylation. Bone loss caused by mechanical unloading is partially due to the impaired regeneration capacity of BMMSCs[16]. When mechanical stimuli were rescued, Dnmt3b was released from the Shh gene promoter, thus leading to promoter demethylation and up-regulated gene expression. Hedgehog signal was then activated by Shh, promoting BMMSCs to differentiate into osteoblasts[17]. Yang et al[18] found that in Tet1 and Tet2 double knockout mice, 5hmC levels of the P2rX7 promoter were down-regulated, leading to miR-293a-5p, miR-293b-5p, and miR-293c-5p accumulation, and a decrease in BMMSC osteogenic differentiation capacity. Upon re-activating P2rX7, microRNA secretion from Tet double knockout BMMSCs was increased, thus partly rescuing both the osteopenia phenotype and BMMSC function.

Mechanisms of TET-mediated DNA demethylation in distinct MSCs vary due to their diverse sources. When small hairpin RNA lentiviral vectors were transfected to knock down TET1, the proliferation rate and odontogenic differentiation capacity of human dental pulp stem cells were significantly suppressed. This indicated that TET1 plays an important role in dental pulp repair and regeneration[19]. In another study focusing on human BMMSCs, TET1 recruited other epigenetic modifiers, including SIN3A and EZH2, to inhibit the osteogenic differentiation of BMMSCs in an indirect manner. On the other hand, TET2 was found to directly promote the osteogenic differentiation of BMMSCs[20]. The underlying mechanisms of how the TET family proteins regulate MSC function from distinct sources require further investigation.

ADIPOGENIC DIFFERENTIATION OF MSCS IS RELATED TO DNA METHYLATION AND DEMETHYLATION

Noer et al[21] reported that in undifferentiated Ad-MSCs, the promoters of adipogenic genes, including LEP, PPARγ2, FABP4 and LPL, are hypomethylated, in contrast to myogenic or endothelial genes. During adipogenic differentiation, although specific CpG sites of the LEP promoter undergo demethylation, the global methylation status of LEP, PPARG2, FABP4, and LPL promoters across different Ad-MSC clones remains stable. Yang et al[18] showed that Tet1 and Tet2 small interfering RNA treatment does not alter the adipogenic differentiation capacity of BMMSCs.

Barrand et al[22] showed that in adipose MSCs, the promoter of OCT4 was hypermethylated consistent with its repression. Melzner et al[23] found that the promoter of leptin underwent extreme demethylation (9.4% ± 4.4%) during the maturation of human preadipocytes toward terminally differentiated adipocytes. What’s more, methyl-CpG binding proteins could bind to specific sites in the promoter and repressed leptin expression. Fujiki et al[24] reported that during the differentiation of 3T3-L1 preadipocytes to adipocytes, the hypermethylated PPARγ2 promoter was progressively demethylated, while 5-Aza could increase the expression of PPARγ2, indicating that the methylation of its promoter inhibited the gene expression.

Overall, additional research on the dynamics of DNA methylation and demethylation during adipogenesis from different MSC sources is necessary.

CHONDROGENIC DIFFERENTIATION IS REGULATED BY DNA METHYLATION AND DEMETHYLATION

Lin et al[27] found that stepwise preconditioning–manipulated BMMSCs showed improved cell proliferation and chondrogenic differentiation potential in vitro and enhanced therapeutic effect on the progression of osteoarthritis in vivo, and one mechanism of that is the reduction in CpG methylation at the promoters of Nanog and Oct4. Pollock et al[28] demonstrated an experimental DMSO-free formulation which could improve post-thaw function of MSCs including chondrogenesis, as DMSO is a strong inducer of demethylation which may affect the potential of MSCs for therapeutic use in treatment of human diseases. These studies reminded us that epigenetic modification of MSCs could be a promising approach to improve their therapeutic effects.

These results regarding DNA methylation and demethylation indicate that hypomethylation of specific genes, such as Runx2, Opn, Dlx5, Osterix, Col2, and Col10, play important roles in multi-lineage differentiation of and tissue regeneration by MSCs (Figure 1). 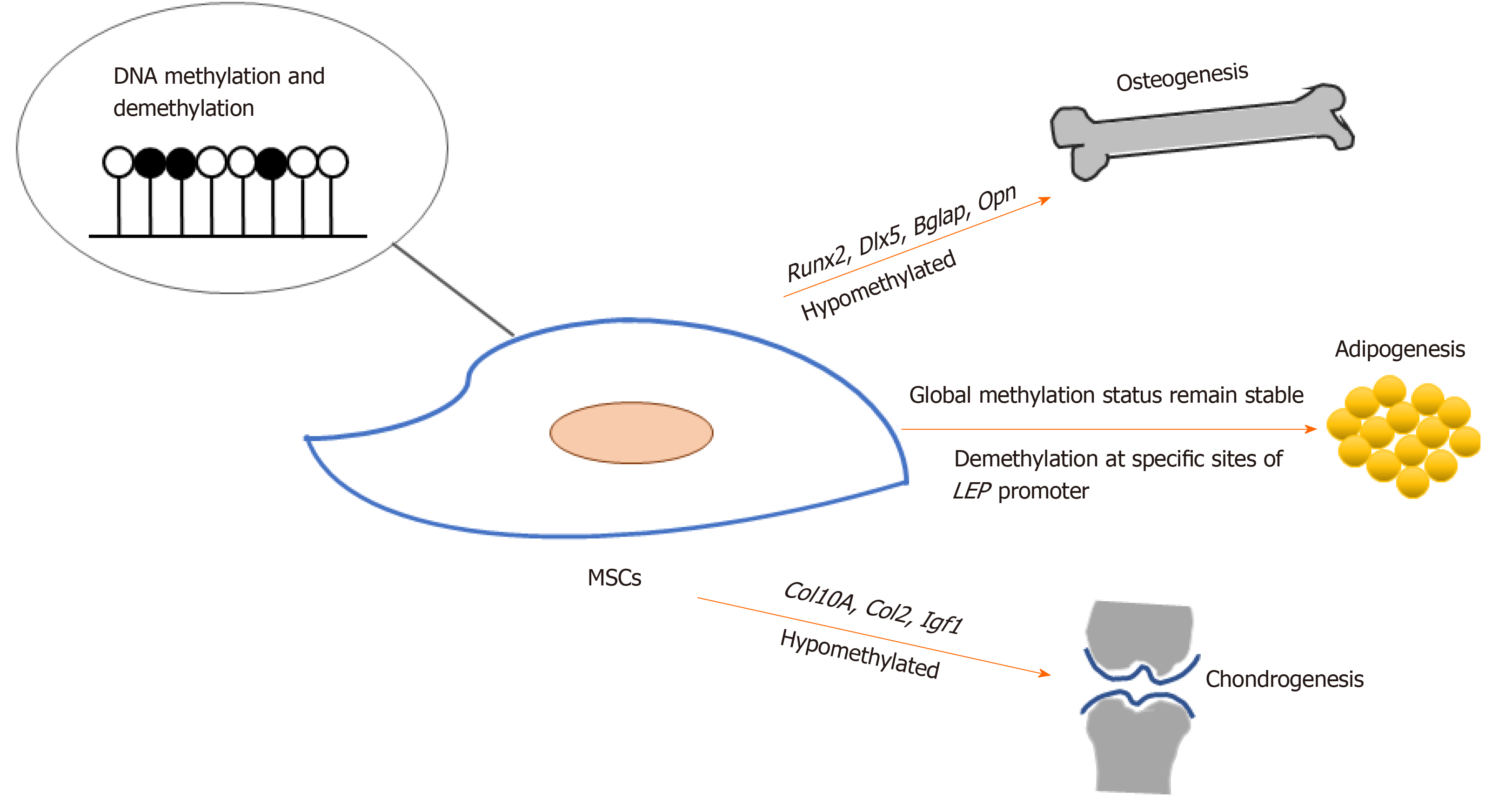 Cardiogenic differentiation is another important property of MSCs, and stem cell therapy for cardiovascular diseases is now in clinical trial[29]. Bhuvanalakshmi et al[30] found that in differentiated cardiomyocytes from MSCs, six out of the ten CpG islands of the promoter regions of Nkx2.5, the early cardiac gene, underwent demethylation. What’s more, the CpG promoter demethylation of sFRP4, a Wnt antagonist, was also observed. This result is consistent with the previous findings that 5-Aza treatment of BMMSCs inhibited the ventricular scar from thinning and expanding, minimized left ventricular chamber dilatation, and thus improved myocardial function[31]. Antonitsis et al[32] treated hBMMSCs with 5-Aza in vitro to induce them to differentiate towards a cardiomyogenic lineage. Nakatsuka et al[33] also used 5-Aza to investigate the myogenic differentiation potential of mouse dental pulp stem cells. DNA demethylation induced by 5-Aza and forced expression of Myod1 upregulated the muscle-specific transcriptional factors such as Myogenin and Pax7.

IMMUNOMODULATION OF MSCS ASSOCIATED WITH DNA METHYLATION AND DEMETHYLATION

Aside from tissue regeneration, MSCs play an important role in immunomodulation, which may prove critical for treating a variety of immune diseases such as colitis, arthritis, and systemic lupus erythematosus[34-36]. Immunomodulation by MSCs relates to the secretion of extracellular matrix proteins[37] as well as a variety of cytokines including IL-2, IL-4, IL-10, TNF-α, and INF-γ[38-40]. MSC immunoregulation can also occur through cellular contacts[40-42]. B cell proliferation was found to be inhibited by human MSCs, not through the induction of apoptosis but through G0/G1 cell cycle arrest[43]. MSCs may suppress T cell proliferation, cytokine release, cytotoxicity, and Th1/Th2 balance[44,45].

Of late, how DNA methylation and demethylation regulate MSC-induced immunomodulation has received increasingly greater attention. Yang et al[46] found that Tet1- and Tet2-mediated Foxp3 demethylation plays a significant role in the differentiation of regulatory T cells as well as the maintenance of immune homeostasis. Khosravi et al[47] reported that MSCs could enhance the demethylation of the Treg-specific demethylated region upon cell-cell contact, and MSC-based induction of regulatory T cells is associated with direct modifications of the RUNX complex genes (RUNX1, RUNX3, and CBFB). Yu et al[48] found that the down-regulation of both TET1 and TET2 leads to hypermethylation of the DKK-1 promoter, which leads to activation of the Wnt/β-catenin signaling pathway and thus up-regulates Fas ligand (the FasL gene) expression in periodontal ligament stem cells. This in turn enhances their immunomodulatory ability, which is demonstrated by their elevated capacity to induce T cell apoptosis. Taken together, these results demonstrate a significant role for TET-mediated DNA demethylation in MSC-based immunomodulation (Figure 2). Nevertheless, further investigations are required to reveal whether the methylation of MSCs is involved in regulation of other immune cells such as macrophages and natural killer cells and the underlying mechanisms. 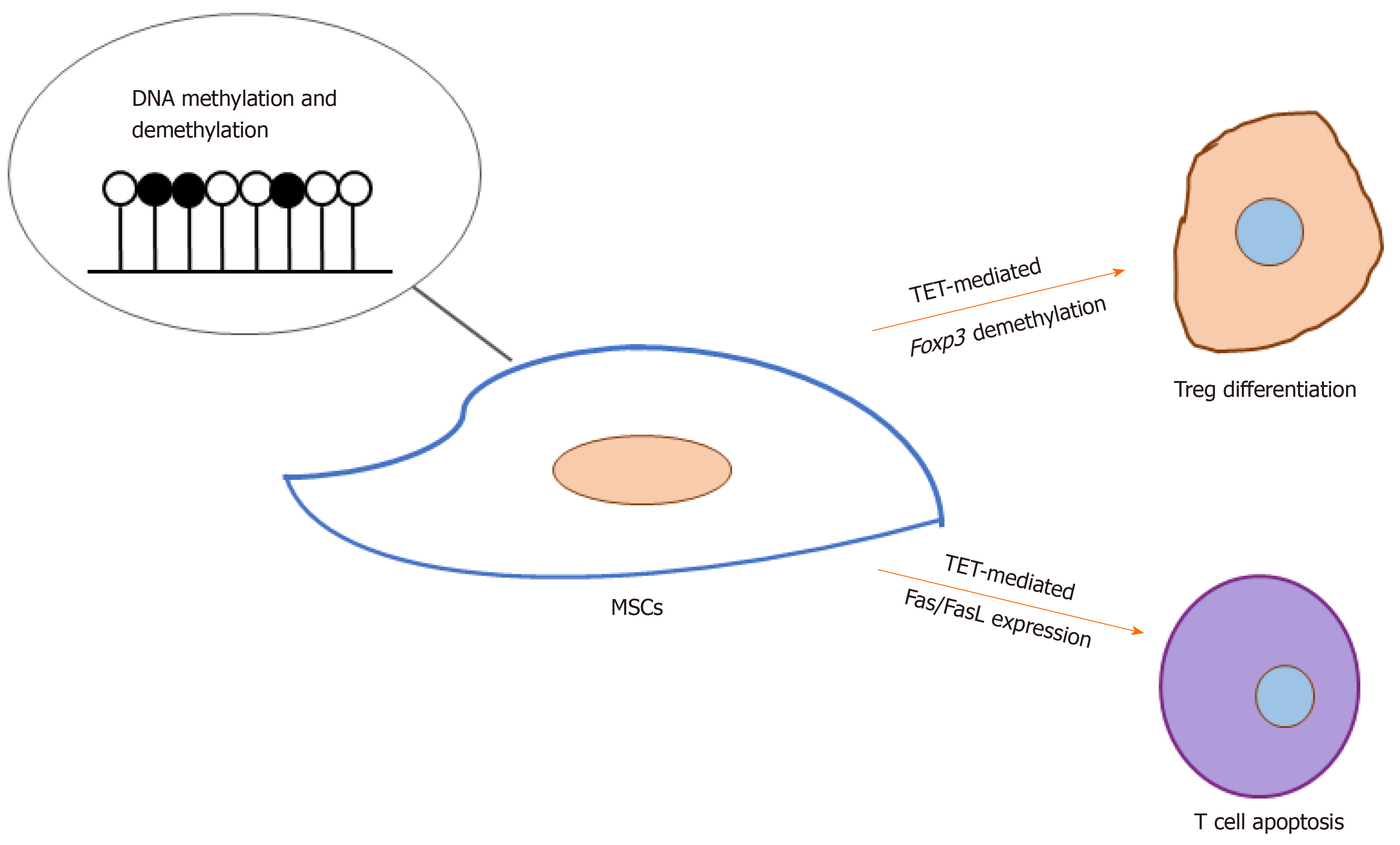 As previously mentioned, DNA methylation participates in the regulation of gene expression, which may contribute to metabolic diseases when there is an imbalance in DNA methylation vs demethylation. García-Ibarbia et al[49] compared bone tissue samples from patients with osteoporotic hip fractures and osteoarthritis. Their results showed that Wnt pathway activity is reduced in patients with hip fractures compared with those with osteoarthritis. Additionally, six genes, including FZD10, TBL1X, CSNK1E, SFRP4, CSNK1A1L, and WNT8A, showed significantly different methylation rates between both groups. FZD10, CSNK1E, TBL1X, and SFRP4 are hypermethylated in osteoarthritis, while WNT8A and CSNK1A1L are hypomethylated compared with fractures. This result may help explain the distinctions in Wnt pathway activity between the two groups. MSCs from spinal ligaments with ectopic ossification largely differentiated into osteogenic lineage. Chiba et al[50] found that MSCs isolated from the spinal ligaments of ossification from yellow ligament patients showed higher expression of GDNF and Wnt5a, which are hypomethylated compared with the control group. This result indicates that osteogenic features of MSCs from patients with ossification of the yellow ligaments are promoted by GDNF and Wnt5a demethylation.

Although a wealth of research has investigated MSC therapy, including hundreds of MSC-based clinical trials that have been administered, the mechanisms that underlie the multiple distinct MSC functions remain elusive. This review sheds light on the roles that DNA methylation and demethylation play in regulating MSC-based regeneration and immunomodulation, although it is possible that we overlooked a few studies due to our literature resource limitations. However, the precise function of DNA methylation and demethylation in different MSC types, as well as the associated underlying mechanisms, remain to be thoroughly investigated. This knowledge would inform the development of novel approaches for enhancing MSC-based tissue regenerative and immune therapies.